This is a sad for Jazz and rhythm & blues music.

The legendary trumpeter Donald Byrd passed away on February 4

Donaldson Toussaint L'Ouverture Byrd II (December 9, 1932 – February 4, 2013) was an American jazz and rhythm and blues trumpeter. A sideman for many other jazz musicians of his generation, Byrd is best known as one of the only bebop jazz musicians who successfully pioneered the funk and soul genres while simultaneously remaining a pop artist.

Byrd attended Cass Technical High School. He performed with Lionel Hampton before finishing high school. After playing in a military band during a term in the United States Air Force, he obtained a bachelor's degree in music from Wayne State University and a master's degree from Manhattan School of Music. While still at the Manhattan School, he joined Art Blakey's Jazz Messengers, as replacement for Clifford Brown. In 1955, he recorded with Jackie McLean and Mal Waldron. After leaving the Jazz Messengers in 1956, he performed with many leading jazz musicians of the day, including John Coltrane, Sonny Rollins, Thelonious Monk, and later Herbie Hancock. Byrd's first regular group was a quintet that he co-led from 1958-61 with baritone saxophonist Pepper Adams, an ensemble whose hard-driving performances are captured "live" on At the Half Note Cafe. In June 1964, Byrd jammed with jazz legend Eric Dolphy in Paris just two weeks before Dolphy's death from insulin shock. 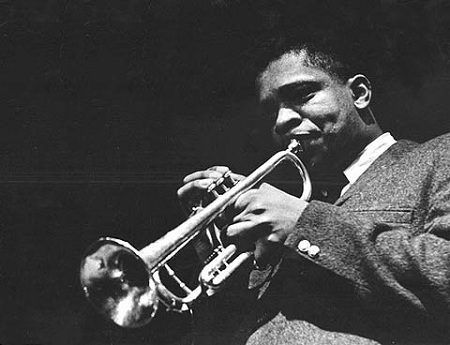 In the 1970s, Byrd moved away from the hard-bop jazz idiom and began to record jazz fusion and rhythm and blues. He teamed up with the Mizell Brothers (producer-writers Larry and Fonce) for Black Byrd in 1973. It was highly successful and became Blue Note Records' highest-ever selling album. The title track climbed to No. 19 on Billboard′s R&B chart and reached the Hot 100 pop chart, peaking at No. 88. The Mizell brothers' follow-up albums for Byrd, Street Lady, Places and Spaces and Stepping into Tomorrow, were also big sellers, and have subsequently provided a rich source of samples for acid jazz artists such as Us3. Most of the material for the albums was written by Larry Mizell. In 1973, he created The Blackbyrds, a fusion group consisting of his best students. They scored several major hits including "Happy Music", "Walking In Rhythm" and "Rock Creek Park".