"I miss the old days when I used to hang around mother Blues in Old Town when 7 nights a week you could go and hear Howling Wolf and Magic Sam, Otis Spann just to name a few... At that time in the sixties I had no idea how big and powerful and well known all these guys were in Europe..."

Billy Prewitt is a self-taught on guitar, harmonica & bass learning enough to make a living until he met Otis Rush who hired him and taught him the blues. To date Otis has 41 classic blues albums. Billy's credits include a "Streetwise Diploma' from dropping out of school, that gave him the credentials to move forward in Chicago south side blues. In 1962 Billy formed his first group and met Buddy Miles, who was in the local rival group. At 16 Billy joined the United States Air Force and worked with many local groups. That year he met Otis Redding and was encouraged to continue playing blues. After the military Billy moved to Miami, formed a new band and worked with Wayne Cochran as house band at the local club called "The Barn". Then he moved to New York City and worked local Greenwich Village night spots where he met Paul Butterfield where they lived in the historically artsy Albert Hotel. Paul convinced him to move to Chicago and play the blues. After this chance encounter critics began comparing Billy to Paul in musical reviews because of their similar electric Chicago style approach and aggressive amplified sound. Moving this time to Old Town, Bill began jamming occasionally on stage with Freddy King, Howlin' Wolf, and Otis Span becoming a regular at the historic "Mother Blues" Nightclub on Wells Street. Billy finally landed a permanent job with blues master Otis Rush which would last for many years through the 1970's. Bill & Otis traveled together from Chicago to New York and played the very first Ann Arbor Blues Festival of over 10,000 spectators in 1969. Bill became friends with Wayne Bennett, who was the original guitar player on Bobby Bland's early albums and learned lots of licks. Billy had been living nearby 2120 South Michigan for quite some time during the legendary blues recordings at the Chess Recording Studio. On March 23, 1969 Otis and Bill were featured on the cover of the Chicago Sun Times Sunday Magazine with a feature article called "Black, White, and the Blues". Paul Butterfield was the first white musician to bridge the crossover of Chicago blues to the white audience and Billy was close behind following in his footsteps. Later that year Billy attended the original Woodstock and while working with Sam Lay decided to produce his own album. The late Steve Goodman heard Billy in the studio and asked him to play harmonica on a demo tune he wrote called 'City of New Orleans' that went on to be a big hit for Arlo Guthrie. The next job to come along in Chicago was with "Baby Huey & the Baby Sitters" on Rush Street, a 14 piece black soul band. At this point he couldn't resist forming his own group again. Having always had a sense of humor about his legal name "Horace William Prewitt III" he called his new group "Horace Monster" which would continue working in one form or another for next 15 years from rock & roll to finally a power blues trio. In the Chicago Reader's Annual Poll the band was voted the top rock act of 1975. One of the local performers who auditioned for that band was Chaka Khan who was leaving a band called "Rufus". Horace Monster often became a topic of conversation on the popular Steve Dahl show. Billy moved into his van to economize which became his permanent residence for the next 2 Chicago winters. He met lead singer Lowell George of "Little Feat", and Lowell showed interest in recording 4 of Billy's songs just before Lowell died 2 weeks later. Billy went on his own with an acoustic mostly blues solo career for the next 2 years.  He was asked to join a new version of "Alliotta, Haynes, and Jeremiah" replacing Skip Haynes who left for a solo career. After Billy left the group Harvey Mandel joined to replace Billy. Later that year he teamed up with singer Mark Skyer for a blues duo. Mark had just returned from touring with "Canned Heat" and Harvey Mandel. In 1979 Billy wrote The Hollywood Sign and it was permantly featured on the official "HollywoodSign.Org" website.

On December 14, 1990, Ben Hollis, star of the "Wild Chicago Show" interviewed Billy for a segment about his music. That same year Bill takes out his well known double neck lightning bolt guitar and forms the "Greased Lightning Band" bringing back 60's & 70's "duwap" music playing summer festivals. In 1996 Billy met the late legendary blues singer Bobby Blue Bland who encouraged Billy to stay loyal to the blues.  In this new age of computers old friend and bluesman Charlie Musslewhite used his Blackberry to communicate by e-mail from his tour bus on the road. They found that Charlie and Bill's dad were born in the same small town in Mississippi called Kosciusko, one of the original southern blues Cajun towns. Hall of Famer Richard Shurman once called Billy "The ghost of Paul Butterfield". Billy now plays only a few select jobs each year only for blues enthusiasts going back to his blues roots.

For me the blues is just a simple honest music that's easy to understand .... there's basically three chords so it's all based on improvising...

The blues makes me happy for some reason because I know that other people feel the same as I do. 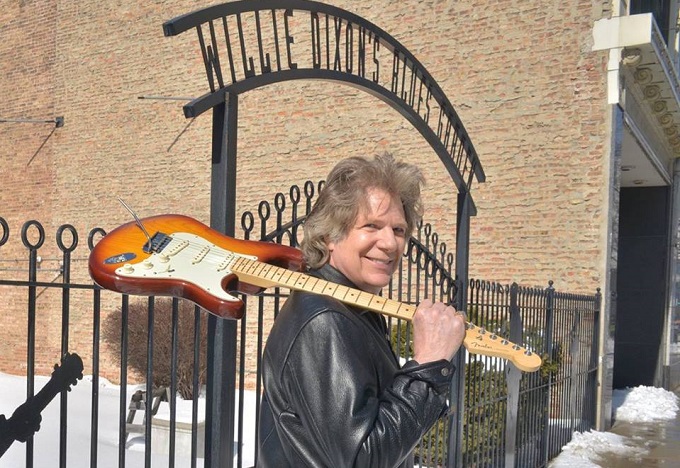 "For me the blues is just a simple honest music that's easy to understand .... there's basically three chords so it's all based on improvising..." (Photo: Billy Prewitt, Willie Dixon Blues Garden, Chess Studios)

What were the reasons that made the '60s generation to start the Blues Rock researches and experiments?

For me it was Paul Butterfield and the very first album... When I heard born in Chicago and the sound of the electric harp I packed up my bags and moved to Chicago... At that time I thought Paul was the only electric harp player and as years went by I learned more and more that everything came from a Little Walter and Jimmy Reed and all the blues greats from back in the day. Paul definitely was the first white guy to bring blues music to the masses.

Well when I got the Chicago I got a job playing with Otis Rush full time and we did the first Ann Arbor Blues Festival... you taught me the most important thing was to just listen before you try to start the play something listen to the whole thing all the way through.

Are there any memories from Paul Butterfield, Otis Rush, and Lowell George which you’d like to share with us?

Some which I can't repeat but when I got to Chicago Otis Rush was my education... the only time I met Paul was in New York in an elevator at the Albert hotel going up to his room and he was recording the album with where did my baby go on it, album and I asked him if I could come by the studio and hang out a little bit and he said NO then got off the elevator LOL... I'm at Lowell about a week before he died at the park west in Chicago and handed him a package with a bunch of songs that I wrote... he died a week later and I thought that was the end of that and then about a year later in the mail I got a package from Elizabeth George who was his wife and she wrote a nice note and said I thought you might like to have this and it was a three-page letter that lower wanted to record some of my songs... I've got the letter framed on my wall... I guess I was always a day late and a dollar short LOL. 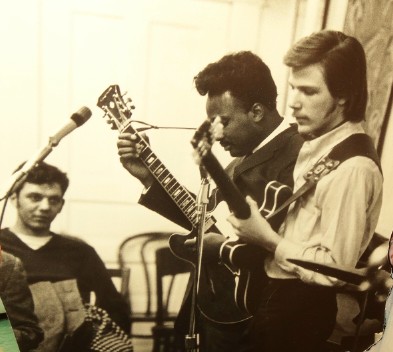 I miss the old days when I used to hang around mother Blues in Old Town when 7 nights a week you could go and hear Howling Wolf and Magic Sam, Otis Spann just to name a few... At that time in the sixties I had no idea how big and powerful and well known all these guys were in Europe... And for that matter Otis Rush too... I thought he was just a real good local band until years later I see now that was my biggest accomplishment by learning from the master.

Maybe that there were more places to play and it wouldn't be so difficult for somebody young and new to come up from the bottom.

What has made you laugh from Ann Arbor Blues '69? What touched (emotionally) you from the Maxwell St. Chicago?

The trip up to Ann Arbor was kind of funny because all of us Road in Otis's Cadillac pulling a little U-Haul with the amps... sort of a bunch of complaining Blues guys... with all my research I see there is not one picture of me playing with Otis in 69 at Ann Arbor... again there was Howlin Wolf and Charlie Musselwhite and I had no idea what a lasting Legacy everyone would leave.

What are some of the most important lessons you have learned from your paths on the Blues roads and circuits?

Well as you know the 60s was a strange time in America but I was proud to know all my black friends.

I would go back to my original trip to Chicago when I join the Otis Rush band and I not have left the band and never moved on to play rock and roll... my biggest accomplishment and most respect I will ever get was from those early Blues days warming up shows for Buddy Guy and Magic Sam... if I would have never left the Blues I'm sure I would have a more substantial name for myself but instead I decided to join the "Artist Protection Program"... where my career will always be the best kept secret in show business LOL. 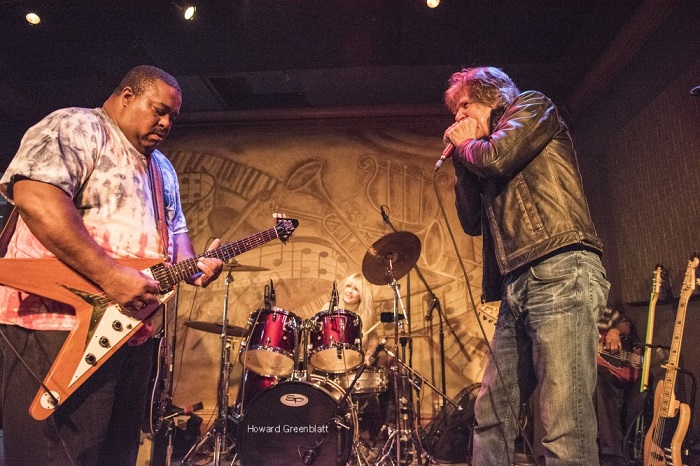