"Sometimes, as cultural priorities become frozen and static, we need a few antinomians to shake things up and cause change."

John Tytell: When the Angels Sing

John Tytell is an American writer and academic, whose works on such literary figures as Jack Kerouac, Ezra Pound, Allen Ginsberg, Henry Miller, and William S. Burroughs, have made him both a leading scholar of the Beat Generation, and a respected name in literature in general. He was born in Antwerp, Belgium, in 1939, shortly before the Nazi invasion forced his family to flee the country. He grew up in New York City, studied at the City College of New York, and worked as a graduate reader at New York. He also began teaching at Queens College in 1963 and has been professor of English there since 1977. 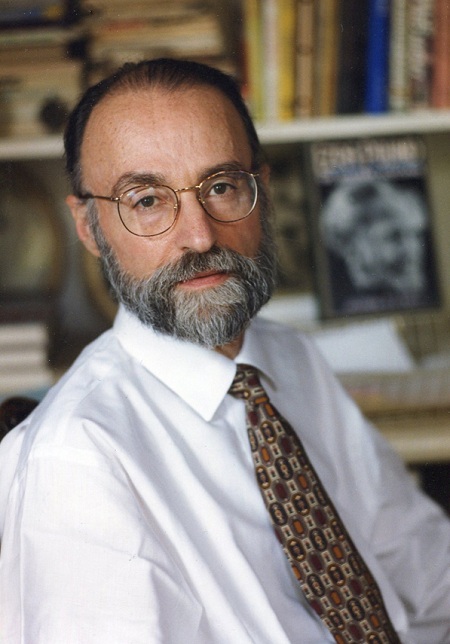 The impetus for the first book Naked Angels was a paper that Tytell presented at "The Last Lecture Series" held by Queens College, entitled: The Beat Generation and the Continuing American Revolution. Tytell's book, Ezra Pound: The Solitary Volcano earned him a nomination for the Pulitzer Prize in 1987, and established him as a major chronicler of America's most important Men of Letters, and has never gone out of print. This career-making book was quickly followed by Passionate Lives, a study of both English and American writers, and the relationships that helped form their creative visions.

The Living Theatre: Art, Exile and Outrage saw Tytell casting his eye from literature to the stage, where he saw the same rebellious spirit typified in The Beat culture and the Living Theatre. Tytell next teamed up with his wife, Mellon Tytell, whose photographic study of many Beat literary figures mirrored his own writing, to produce the book, Paradise Outlaws. The book is an overarching picture of both the major and minor figures of the Beat Generation. The book can be seen as a follow up to Naked Angels, but with the added advantage of a twenty-five year removed perspective, to the lasting importance of the now widely recognized literary movement--a movement he first brought into the realm of legitimacy.

Reading New York, published in 2003 is Tytell's most recent work, and can be seen as a hybrid of memoir, biography of American writers, history of New York, as well as literary criticism.

When did you become involved in the literature?

I grew up in Manhattan during the fifties, a story I’ve told in a memoir called Reading New York. I read the accounts of the San Francisco Howl trial and New York Post reporter Al Aronowitz’ series on the Beats. I read Howl in 1956 as an undergraduate (but not as course requirement) and recognized immediately that it was an epic announcement, that no previously composed American poem was as overwhelming, and that it had the potential to open American literature to new dimensions. When On The Road came out and Naked Lunch, I read them also and saw the extent to which those novels were transformative.

A decade later, in 1969, I reviewed Kerouac’s final novel, Vanity of Dulouz, for The Catholic World and then a very thin survey of the Beats by Bruce Cook for Commonweal. Though Cook’s book was half-baked, the interviews he included were intriguing .I realized that much of the angry dismissal of the Beats by American literary critics was based on the most shallow misunderstanding, that the Beats were fuel for the culture wars that were emerging as a divisive factor in American life. I attempted to correct such views with Naked Angels, but prior to its publication in 1976 I had written a long defense of the Beats called “The Beat Generation and the Continuing American Revolution” which appeared in The American Scholar, and I reviewed Kerouac’s Visions Of Cody, and called it his masterpiece, for Partisan Review. The American Scholar and Partisan Review were both highly influential magazines.  I interviewed Ginsberg at his farm in Cherry Valley for Partisan Review, interviewed Burroughs when he returned to New York in 1973, and interviewed Lucien Carr, Carl Solomon, Herbert Huncke and other members of the Beat circle.  When I was asked by filmmaker John Antonelli to write a screenplay on Kerouac, I conducted more interviews.

What is the line that connects the legacy of Romanticism, Ezra Pound and Henry Miller with the Beats ?

I taught a graduate seminar at N.Y.U. in 2011 to answer this question and it is complex. Whitman and the Transcendentalists were the original spokespersons for progressive change. They were the heirs to Ben Franklin and his older brother James who first successfully challenged American Puritanism. Pound was admired because he stood up to the war system with fundamental questions that were irritating enough to get him locked up for over a decade in St. Elizabeth’s, a mental prison in Washington, D.C. Miller was the spiritual Granddaddy of the Beats because he joyfully crashed through all the Victorian taboos (that became established convention until after the Howl trial) that obligated writers to focus on polite superficialities of existence as subject matter.  Sometimes, as cultural priorities become frozen and static, we need a few antinomians to shake things up and cause change.

Why do you think that the Beat Generation continues to generate such a devoted following?

While that following has been encouraging, and ten million copies of On The Road have been printed in the U.S. alone, there is still considerable resistance and a sort of elitist yet Philistine snobbery that still considers the Beat writers as too raw, as insufficiently educated and outrageously transgressive. The critics of the Beats are still intent on maintaining that it is all a matter of decorum but that’s because they are still restrained by the Victorian corset. That’s why, in my recent essay in The Chronicle of Higher Education, I began with a colleague’s smarmy advice that Kerouac was only suitable for adolescents.

How have the Beats affected culture? While they have had a much broader affect on culture than writers usually have, It would take me too long to account for this. I would recommend the concluding essay, “The Opening Divide,” in my book, Paradise Outlaws that began as a talk I gave at the Venice Film Festival in 1996 on the cultural legacy of the Beats.

What is the relation between Words and Music?

I think Orpheus and the ancient Greeks picked up on this. When they were still nomadic wanderers worshipping a panoply of deities, when the poet sang the tribal history, he accompanied himself with the lyre, which is how we get the word “lyric”.

Who among the Beats had the most passion for Music?

David Bowie, Lou Reed or Patti Smith might claim Burroughs as the godfather of Punk, but both Ginsberg and Kerouac were profoundly affected by music. Ginsberg told me his mother played Ma Rainey and Bessie Smith recordings in Paterson, New Jersey when he was a child. He used to accompany himself with a harmonium in the early days; later he would be backed by musicians like Steve Taylor though John Lennon and Bob Dylan played behind him as well. At his last public appearances, the Carnegie Hall benefit for the Tibetans in 1997, he chanted his poem “Ballad of the Skeletons” and was backed by Billy Corgan of The Smashing Pumpkins. It was an unforgettable performance.

Kerouac set a record for cutting classes when he was an undergraduate at Columbia University because he spent too many nights at Minton’s Playhouse, a jazz joint in Harlem. At Minton’s, a group of artists, Charley Parker, Dizzy Gillespie, Lester Young, Thelonius Monk, the young Miles Davis, were creating  Bop--a new variant, a dissonant departure from the harmonies of big band Swing dance music. Lester Young used to take Kerouac to jam sessions where the music continued till dawn. It is hard to make your 9am class under such circumstances. But Kerouac was a listener and what he heard would be reflected in the way he would write. Kerouac would later eulogize Young in a marvelous passage comparing him to the Mississippi River in Visions of Cody, and would write two poems about Charley Parker in Mexico City Blues.

Do you have any amusing tales from the bohemian Greenwich Village era?

Yes. Some like my initial meeting with Lucien Carr will appear in a new book called Writing Beat.  Some I’ve told already like the basement flat down the street from where I’ve lived for forty years where Henry Miller and his second wife, June, ran an illegal speakeasy during Prohibition. In 1929, June gave him a one-way steamship ticket to France. 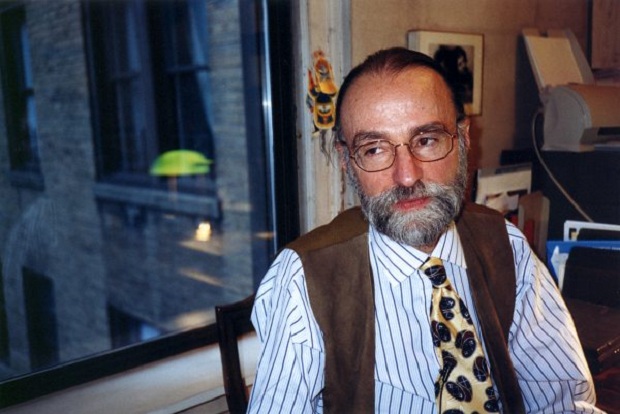 "when the poet sang the tribal history, he accompanied himself with the lyre, which is how we get the word 'lyric' ." Photo © by Mellon Tytell

I’ve had numerous lows in my career, mostly Lucky Jim slurs or denigrations by envious academic types, but I consider myself to have been privileged to have taught at Queens College (C.U.N.Y.) for over half a century.

I have had too many highpoints but I’ll list a few: when Leon Edel, James’ biographer, chose me to assist him at N.Y.U.  from 1963-68; when Ginsberg thanked me for writing a six page spread on the Beats for Vanity Fair; when Barney Rossett told me his final act at Grove Press was reprinting Naked Angels where it remained for two decades until the recent incarnation with Ivan Dee. So Naked Angels has never gone out of print here and translated into a number of languages.

What would you like to ask the "Colossus of Maroussi” Katsimbalis?

I suspect The Colossus of Maroussi may be the best book ever written by an American on Greek culture.  The portrait Miller draws of Kamsimbalis is so vital, so generous, so animating, so larger than life. I would ask Katsimbalis how much of Miller himself is reflected in that portrait. 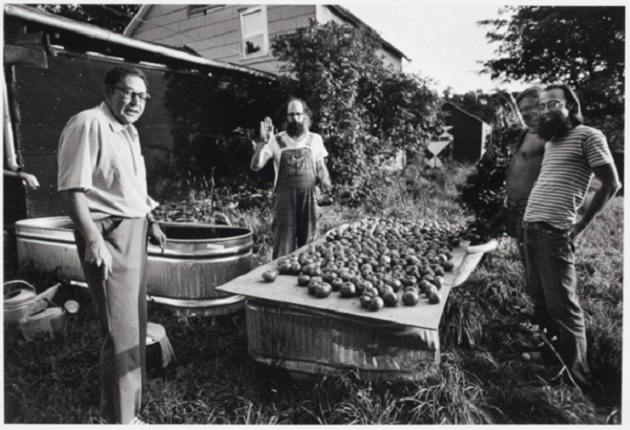