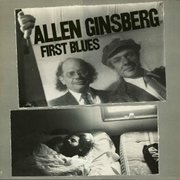 Ginsberg Recordings (a collaboration of Ginsberg’s Estate and Esther Creative Group), Housing Works, VitaCoco, and Warby Parker are hosting a musical soiree to celebrate a vinyl and digital reissue of Ginsberg’s FIRST BLUES. The work was originally released as a double LP back in 1983, and as a CD in 2006.  Produced by legend John Hammond Sr., this record of songs is a collection of studio sessions from 1971, 1976, and 1981 and included the likes of Bob Dylan, Arthur Russell, David Mansfield, Happy Traum, David Amram, Steven Taylor and Peter Orlovksy. To commemorate this reissue, a limited run of 500 seven track vinyl that mimics the original style down to the newspaper insert will be available that night and online.

Vita Coco is a proud supporter of Housing Works and happily donate our all-natural, never from concentrate premium coconut water to help raise funds for the benefit of the community of people living with and affected by HIV/AIDS.

Warby Parker is kindly donating at $95 gift certificate which will be raffled off. Anyone who buys a copy of First Blues will get a raffle ticket, and additional tickets will be available for $1 each, with all proceeds going to Housing Works.