An Interview with blueswoman SharBaby, singing and playing with her own way and keep the Blues Alive!

"The feel I miss nowadays is that the Blues is not as Authentic sounding.  It has been more of a Rock sound. We seem to have lost the soul and spirit of the Blues."

SharBaby Newport first got interested in music at the age of 6 years old. At the age of 11 years old, she took guitar lessons and was deeply inspired by Hubert Sumlin and the Beatles. Shar's Dad was a gospel singer in the 50's and early 60's, opening for Sam Cooke and the Soul Stirrers, The Alabama Blind Boys, and the Dixie Humming Birds to name a few. 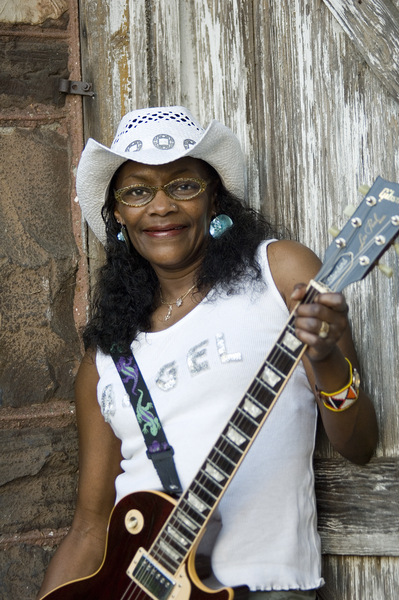 Shar got her name from her Aunt Marie at the age of 6 years old (SharBaby.) Shar has played many festivals both in the U.S. and Europe. Shar is on radio stations both in the U.S. and Europe. Shar is currently ranked # 1 on Reverbnation for Birmingham, AL. Shar has an Album out called "Chicago Blues Alabama Style. The song Called "Crazy About  A Mercury" (cover song) made number 1 on Cashbox Roadhouse Blues and Boogie charts in 2010. They have put that same Album back on the Charts for Cashbox at number 21. Reports and reviews on Shar has been published in various blues magazines in Europe and USA. Shar went on tour 2 times to England and is planning another one in Europe in 2013. She also went to Malaga, Spain in 2009 for a Festival. Shar has shared the same stage with Denise LaSalle, Willie King, Kenny Neal, Honey Boy Edwards, Sam Lay, T-Model Ford, Jerry Portnoy, Charlie Musselwhite, Paul Oscher to name a few. Shar is currently working with the Alabama Blues Project in Tuscaloosa, working the blues in the schools program.

Shar has her own Original way of singing and playing the Blues!!!! She is still trying her best to keep the Blues Alive!!!!!

I learn that the Blues make me feel good when I sing and play it. The Blues mean so much to me because it is the Roots of all Americana Music.  Anything from Country music, Jazz, Gospel, Folk, Rock ’n’ Roll, and even Rap music!!!!!  Oh! Even Heavy Metal.

What experiences in your life make you a GOOD BLUESWOMAN and SONGWRITER?

Oh, I have had some great experiences in My Life to make me a good blues candidate. I have been broken hearted, divorced, Abused and talked about.  I think that everybody gets the blues now and then.  We also can all write stories or songs about our lives. Some good and some bad. You know that they also have happy blues too.  They have fun blues songs. Blues music has its own sound, whatever way you put it. "It is a deep aboriginal feel that is buried deep down in us." Photo by Larry O. Gay

How do you describe SharBaby sound and progress and what characterize your music philosophy?

Well, I would describe my Sound (SharBaby) as original.  It is a more Country Blues, Traditional Feel.  But it is definitely an original sound I think the progress is coming along pretty good because of the originality of my songs and sound.   What characterizes my music philosophy is to make my Fans and people feel good when they hear it. Something that they can relate to.

I have learned good blues secrets from some of the most famous to some of the ones that have not even been discovered yet.  For instance, B.B. King,  Albert King, Memphis Minnie, Sister Rosetta Tharpe, Howlin Wolf and Hubert Sumlin, Muddy Waters, Koko Taylor, etc too many to name.

My Best Moments is When I Got Inducted into the Blues Hall Of Fame in November 29, 2012 and my Blues Awards for Best performance, My Original Song,  Keep Your Mind to Yourself,  and for Best Blues Band for the Indie Music Channel Awards there in   Hollywood   California. The Best Moment of My Career is when I got to do a Blues Festival in  Malaga, Spain (The Coin Blues Festival) in 2009  Because from then is when  my trips to overseas started.   I never ever thought that I would make it across the Pond!!!!!  My worst moment is when no one show up for a New Year's Eve show 3 years ago right here in Birmingham, Alabama!!!!!

What is the “feel” you miss nowadays from the old days of Blues? The feel I miss nowadays is that the Blues is not as Authentic sounding.  It has been more of a Rock sound.  We seem to have lost the soul and spirit of the Blues.

The most interesting period in my life is NOW!!!!!  I am starting to build a Fanbase worldwide!!!!  That is a hard thing to do. I am going on tour in France, Belgium, and Luxembourg starting in March, 2013 through April, 2013. The very first agency in Europe I have ever worked with.  Their name is Letroit Tours.

The music business has changed tremendously since I started to play. You use to have to depend on Record Companies and Record labels to get heard or get known.  But now we have Independent Avenues for the Artists which give them more freedom to maneuver their own way.  We have more control over our own destinies in the music field. I Love that!!!

I would tell them never give up your dream!!!!  No matter how dark it can seem sometimes.  You never know who is listening to you or watching you. Keep a positive attitude!!!!  And Please Stay Humble, You will be surprised at how far that gets you.  Don't Burn Your Bridges.  Just never give up it is out there for you!!!!! 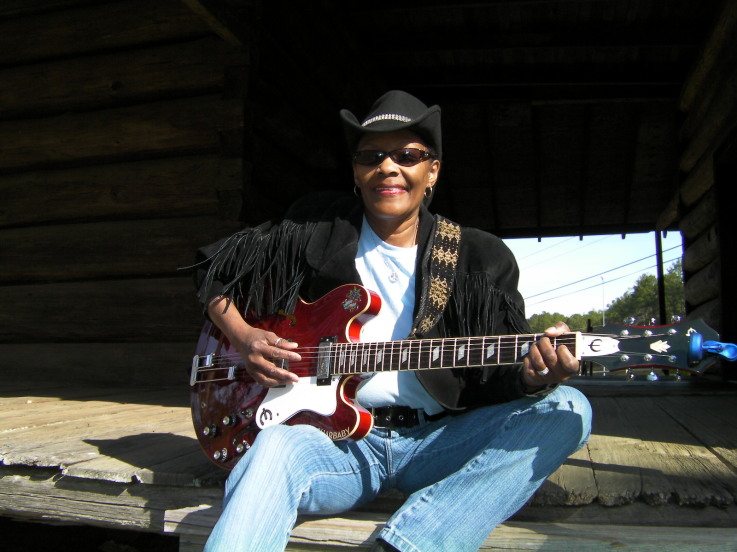 "I would tell them never give up your dream!!!"    Photo by Jim Newport

I think the Blues continues to develop a following, because it is the Roots of All Americana music. It is a deep aboriginal feel that is buried deep down in us. When we hear that sound, it sublimely   reaches our Sub-Conscience without us even realizing it. The Blues might slow down some, but it will never cease to exist, because  all of American Music has a drop or 2 of Blues Blood in it!!!!!

Which memory from "Honeyboy" Edwards and T-Model Ford makes you smile?

I Met Honey Boy Edwards and T Model Ford at the Freedom Creek Festival. Hone Boy Edwards was a very friendly, sweet guy!!!! He would clown around making funny faces and dance in his chair.

T Model is definitely a ladies’ Man. He would ask me about some of the younger singers and ladies there. He gave me his driver's license, a younger picture to show the ladies. It was really funny.

I have a lot of beautiful memories of Mr. Willie King. First of all, Willie was a sweet and love able person to be around. He was a very down to earth person. He was like that with everyone he met. I would like everyone to know that Willie King is the reason that I moved to Alabama. In 2006 My Husband and I decided to come down to Willie's Freedom Creek Festival. I really wanted to come to see Hubert Sumlin. He was supposed to be playing in that Festival that year. I did not know who Willie King was, but I could see that his Festival looked fun and down to earth. At that time I was living in South Bend, Indiana. It was a long drive down to Alabama but I did not care I wanted to meet Hubert Sumlin, one of my mentors that played for years with the Howlin Wolf Band. I also loved Howlin Wolf. When we got to the Freedom Creek Festival, I met Mr. King. He said that Hubert would not be there because of a Funeral that he attended.

I was a little heart broken, but something good come out of that trip anyway. I told Willie that I could sing and play the blues a little.  He told me that he would let me go on stage and do a couple of songs. When I went on stage and did my songs, one song was "Killin Floor" by Howlin Wolf and the other song was an original called "Own Mind Blues." After the performance, He told me that I was hired to play in his Freedom Creek Festival every year. I played for about 5 Years until He passed away about 3 years ago in March, 2010. I can honestly say that I was discovered by Mr. Willie King. The Best advice that I got is that if you have the Blues, You have to sing the Blues to get it off of you!!!! That advice came from Mr. Willie King in some of the great conversations that we had.

I want to mention about Sam Lay. I got to meet Sam here in Birmingham, Alabama. I did not know that Birmingham, Alabama is his hometown!!! I met Sam and his Wife at the Freedom Creek Festival and Marty's bar where Sam was doing a show. He let me come up and do "Killin Floor" with him. He is the drummer on that song with Howlin Wolf back in the early 60's. He was the main drummer for Howlin Wolf Band for years in the late 50's to early 60's.

Well, You know that Women were the first ones to sing the Blues, ladies like Bessie Smith, Ma Rainy, Memphis Minnie etc. I think the Ladies were more serious when they sing the Blues. Back in the Day, Women had it very hard. The Men were serious, but I noticed sometime they could put a little humor in the Blues. They both sung about Everyday Life, the love between a Man and Woman. Also the Hurt between Man & Woman.

I do believe in the existence of the real blues nowadays.  I don't think that the Blues will ever really die out.  It can be watered down, but not drowned, LOL !!!!!  You still have people that really sing from the Heart these days. That is what the Blues is all about singing with feeling. What comes from the Heart touches the Heart.  In music I think that will always be. 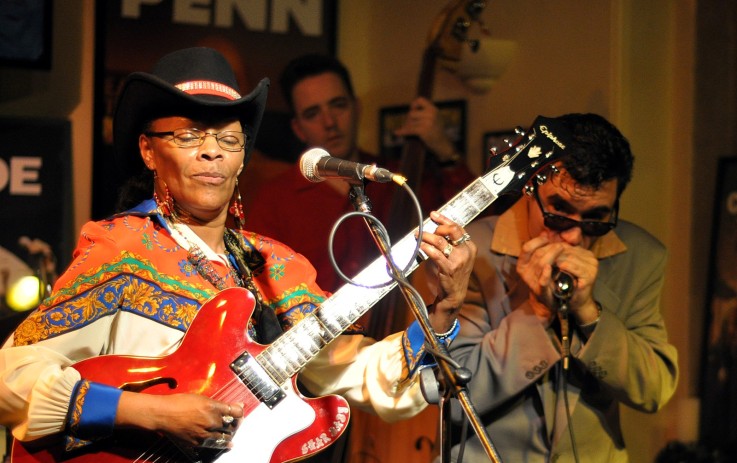