"I learn to keep myself disciplined, to have fun and enjoy the people around me."

Kenny Smith was unquestionably born into blues royalty. He grew up in the same house where Muddy Waters once lived in Chicago, the home of the blues. Throughout his childhood, Kenny "Beedy Eyes" was surrounded by Muddy and his friends, which included his own father, Willie “Big Eyes” Smith (1936-2011). These same blues icons helped mold him into the person and drummer he is today and later in life asked him to provide his famous backbeat on some of the largest and most respected stages and recordings in the world. Kenny has played over 9,500 live performances to date and has earned the right to wear that royal blues crown. His father, Willie “Big Eyes” Smith, played drums for the Muddy Waters’ Band in the early 1960’s and then again from 1968 through 1980 and was featured on all of Muddy’s Grammy winning albums. Kenny “Beedy Eyes” Smith, one of the best known living blues drummers today, learned 99% of what he knows about drumming from his father and was also inspired by acclaimed drummers: Odie Payne, Fred Below, Earl Phillips, Louie Bellson, S.P. Leary, Francis Clay and Art Blakey, Sonny Payne, Clifton James and many others who paved the way. And with those experiences Kenny has revitalized and created new interpretations of the blues drummers as he pushes blues drumming to new innovative and tradition styles. 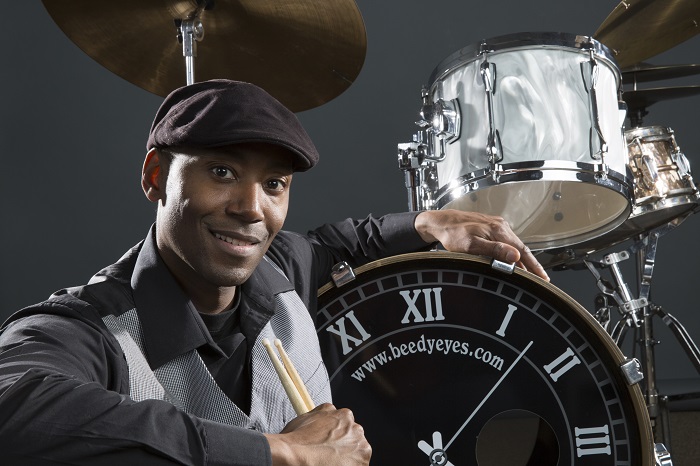 Music is about chasing a feeling- happiness, excitement, anger, sadness. Blues is the most intense combination of music and feeling. The power and emotion of the music transcends time and can be felt by people of all ages and ethnicities- the sole reason why the blues will survive and thrive for generations to come. The blues, like all elements of life, is meant to grow, change and progress while retaining its essence. Kenny “Beedy Eyes” Smith and the House Bumpers accomplish just this with their latest album, “Drop the Hammer” (2019). Kenny honored the blues legends he admired by laying down a few traditional tracks. Much of his playing was molded by the teaching of his late father, Willie “Big Eyes” Smith, who was the drummer for Muddy Waters for over 18 years, and it was important to give this nod of respect.

Kenny, when was your first desire to become involved in the blues & who were your first idols?

My first desire was when I was a young boy watching my father and all of his friends practice in our basement. I then went to a show and watched thousands of people enjoying these same songs that I had heard in my own house that was my moment, and my first idol is and will always be Willie Big Eyes Smith not because he was a great blues Legend, most of all he was a great Father.

What have been some of your musical influences and what were the first songs you learned?

My first musical influences was the blues because when I grew up, that’s all I knew.

What are your first musical memories growing up in Chicago?

My first musical memory was going the University of Chicago and watching my father and Muddy play. I grew up with the blues all around me and I considered all the blues giants that would come to the house, as family. 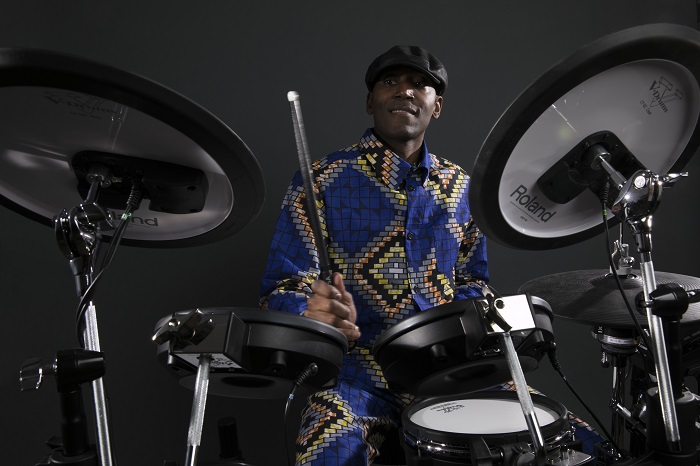 What are some of the most important lessons (of life) you have learned from the blues people?

Some life lessons that I have learned from my elder blues musicians are to always put your heart into the music and to get a higher education so that you can understand the contracts you are signing.

How do you describe your songbook and sound? What touched (emotionally) you from album "Drop The Hammer"?

Each and every song touched me on the album Drop The Hammer from the unique sound the band used to create the music to the lyrics in each song.  I liked just seeing the smiles and enjoyment on all the musicians’ faces in the studio.

Having a strong family background has been my most important experience- and I consider many blues musicians to be a part of my extended family.

The blues is not in the past nor is it dead, its alive and well living all over the world. I hope the blues music continues to grow musically while continuing to keep the emotional attachment.

The one thing I would change would be having a program for all musicians, specifically catered to musicians, that could provide them with a source of income when the performance season becomes slow or if they are just not working. "I would not just say Chicago blues generates a loyal following. I would say that the blues has such an impact on people from all walks of life young and old from all over the world that’s how strong the feeling of the blues is."

The best part about the blues is it is all the above. Just like all other style of music the blues has its old distinctive patterns and sounds that makes it the blues. Every blues artist has their own artistic movement performed on several instruments. Definitely, it’s a state a mind from the musicians that are playing the blues to the listeners that are enjoying the blues.

What characterize the music philosophy of "Beedy Eyes" Smith about the blues?

Difficult question, but...Odie Payne, Fred Below, Earl Phillips, S. P. Leary, Francis Clay which of these GREAT drummer you do you consider the best?

All of those guys, including Willie Big Eyes Smith, were the founding pioneers for the blues. By far my father was my greatest mentor for me but I also knew of S.P. Leary, Odie Payne, Art Blakey and this list can go on forever.

How was your relationship with your late father’s blues friends?

It was great because his friends were considered family to me. Muddy and the guys would get together, play cards, laugh and joke while us, the kids and grandkids, ran around the house.

What advice has given the late great Willie “Big Eyes” Smith?

Live, love and learn and respect one another. 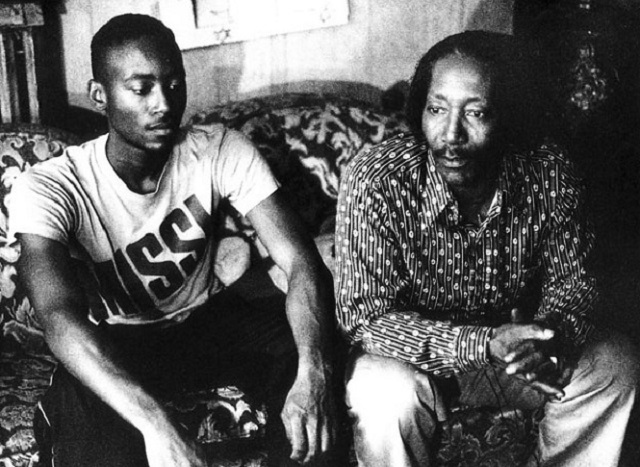 "My first desire was when I was a young boy watching my father and all of his friends practice in our basement. I then went to a show and watched thousands of people enjoying these same songs that I had heard in my own house that was my moment, and my first idol is and will always be Willie Big Eyes Smith not because he was a great blues Legend, most of all he was a great Father."

I can remember going to a Muddy show and seeing a whole bunch of musicians, Lightnin’ Hopkins and many others, sitting around playing cards laughing and joking all night long.  It was late… so I went to sleep on the couch and when I woke back up again, they were still playing cards, laughing and joking. By this time the sun was coming out.

Why do you think that the younger generations are interested in the blues?

Absolutely- I see them all across the world playing the blues from their hearts.

What do you learn about yourself from music? What is the story behind your nickname “Beedy Eyes”?

I learn to keep myself disciplined, to have fun and enjoy the people around me.

Someone wrote an article and called me “Beedy Eyes” because my dad was “Big Eyes” and from there it stuck!

How would you describe your contact with people when you are on stage?

I feel the warmth and the joy that we bring to one another.

LOL if I had a time machine I would take a trip out in space just far enough to see the entire planet earth.  From that point, I would sing the blues to the entire world in one day.

Could you tell me a few things about “Blues in School” and how it came about? 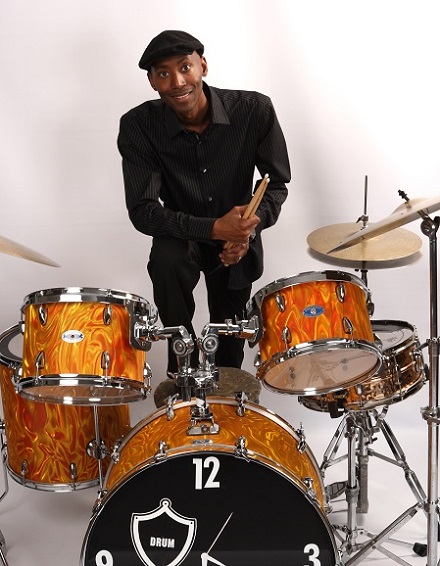 My fondest memories are those playing drums behind my father on stage.

"I wish that I could make a wish for the blues.
However, there is not one thing that the blues has not already experienced."

What advice do you want to give to your daughter?

I want her to follow her dreams and work hard to achieve them.

I saw your bio you play also piano and harmonica. Do you play any other instruments besides drums?

I fiddle a lot of different blues instruments but drums are a big part of my life.

How do you describe "Kenny" (as a person)? What are your plans for the future?

I try to be positive and enjoy life to its fullest! My present future in the music business is going great and I couldn’t ask for anything more.

Why do you think that Chicago Blues continued to generate such a devoted following?

I would not just say Chicago blues generates a loyal following. I would say that the blues has such an impact on people from all walks of life young and old from all over the world that’s how strong the feeling of the blues is.

Do you remember any funny thing that ever happened on a gig?

There was a performance in Canada that I did and I had brought brand new drum sticks for the show but as soon as we started the show, my sticks broke so I grabbed another pair and they broke after one stroke and that kept happening over and over again. By the end of the show I was playing with a pair of sticks that I used a whole roll of duck tape to repair. That never had happened to me before!

Give one wish for the blues...

I wish that I could make a wish for the blues. However, there is not one thing that the blues has not already experienced.

Do you have any message about the blues fans around the world?

Keep on keeping the blues alive and I hope to get over and jam with you sometime.