"Blues music is currently an American musical form or style and today has nothing to do with it’s past. There are exceptions … musicians that have an actual historical link, but they are few."

Eddie "Devil Boy" Turner, the Cuban-born singer/guitarist, raised in Chicago cut his teeth in several rock bands, he moved to the Rockies in the early 70's to attend the University of Colorado. More inspired by music than by academia, Turner immersed himself in the local scene, and stints with some notable acts ensued. He played in the region’s first punk/r&b band The Immortal Nightflames, then with Tracy Nelson, Mother Earth, and the 4-nikators. Turner got the chance to grab at the brass ring when Colorado compadre Tommy Bolin left his band Zephyr. He eagerly joined the hard rock, psychedelic, blues band as a guitarist, singer and songwriter. But, tragedy struck with the sudden death of Zephyr lead singer Candy Givens. Deeply shaken, Eddie decided to “grow up” by taking a hiatus from performing music to become a realtor in Denver. 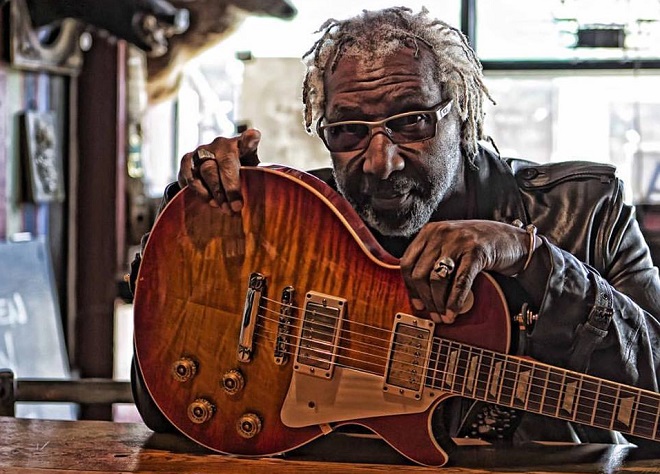 A decade later, when Eddie was invited to join the Ron Miles electric band led by one of the country’s premier trumpeteers, he jumped at the chance. Then, in 1995 he rounded out the Otis Taylor Band. Turner continues to evolve as an artist. Running the gamut between Blistering guitar to deep delta blues, each CD dazzles with the chops and techniques that Turner has developed over the course of his unique genre melding career. It's evolutionary music and quite grown up indeed. Eddie and the Trouble Twins -bassist/vocalist Anna Lisa Hughes and drummer/vocalist  Kelly Kruse- released the new in-concert recording album at The Blues Can in Calgary, Alberta, “Naked…In Your Face” (2016).

When was your first desire to become involved in the blues and who were your first idols?

What do you learn about yourself from the blues music and culture? What characterize your music philosophy?

How deep I can go into myself and see the monsters that dwell there and still come back satisfied and alive. Philosophy? Steal everything, but don’t let anyone know.

I played a teen dance at 13 with my little band, let me think...well, we had to do Hoochie Koochie  Man, Born in Chicago...Who Knows. At the end of the day it takes all three to be able to express myself, so that I can be understood. But the heart & soul start and finish what the brain starts.

What does the BLUES mean to you and what does Blues offered you?

To me now, the blues experience is my life. It is the starting block for all of my music...It’s the beginning of the path I have taken.

From music, I have learned and experienced, that all people are connected spiritually through the sound. It is a primal experience.

David & Candy Givens from Zypher taught me that if you want to be here on Monday you better play like you’re chasing the gods tonight! Kenny Passarelli made me calm in the face of adversity the best advice? You’re only as good as your last show & read your bank statement not your reviews. 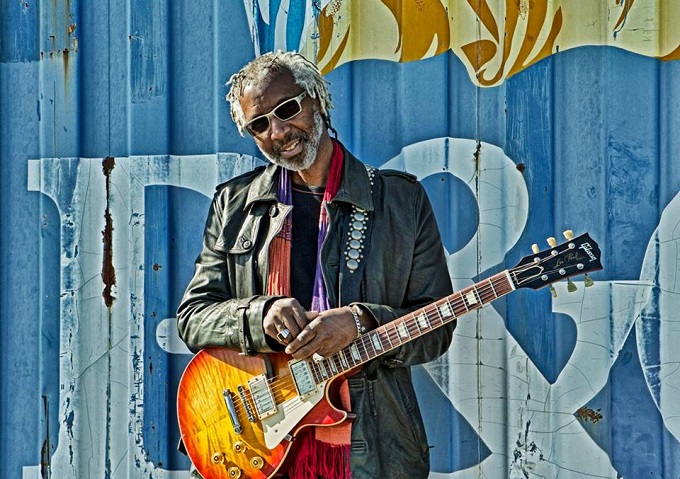 "To me now, the blues experience is my life. It is the starting block for all of my music...It’s the beginning of the path I have taken." (Photo by Eddie Turner's archive / All rights reserved)

Ahhh...The best moment? I have been so fortunate to have so many… And the worst? I’m blessed with a very short memory, so I have forgotten! What did you say?

Why do you play guitar and what are your favorite? How do you describe the sound of Eddie Turner?

I wanted to play the Bass guitar... but my hands were just a bit too small, so I gravitated to the guitar. I am still a frustrated bassist, I just like the sound of the guitar especially the electric guitar! I have played most guitar makes but for many years the Stratocaster was my favorite...tone...playability... but now I play the Framus Diablo! Great tone...feel...it’s a killer guitar! My sound is: Melodic...but very aggressive!

I learned both slide & regular guitar from listening to every record I could find. Practicing every single day. My guitar style, both Spanish & Open tuning slide come from listening to guitarists that I like. Then I copy...practice and then it becomes me... my style... If you listen you can hear who I stole it from!...but...I also listen to horn players...they have a sound that is worth learning!

What touched (emotionally) you from Nick Gravenites’ song ‘Buried Alive in the Blues’?

This song reminds me of my youth when I was trying to learn how to play this music! Sneaking in to blues clubs in Chicago to see Howlin Wolf, Junior Wells, Buddy Guy, Pinetop Perkins, Muddy, Michael Bloomfield and figure out what it was … and what it is. 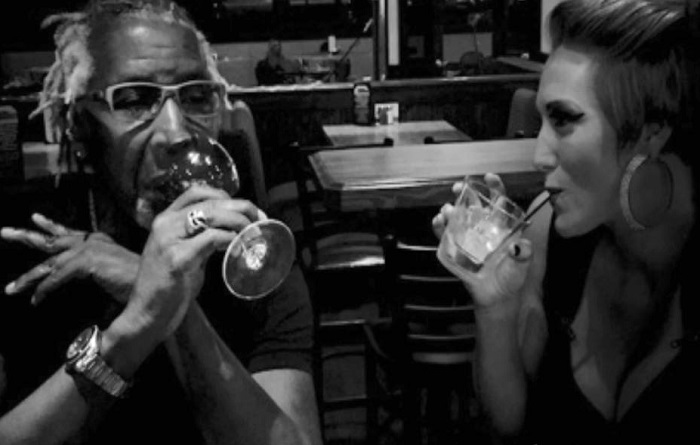 "From music, I have learned and experienced, that all people are connected spiritually through the sound. It is a primal experience." (Photo: Eddie and the Trouble Twins bassist Anna Lisa Hughes)

What’s the best jam and gigs you ever played in?

There have been so many...Zac Harmon, Jock Bartley (Zephyr & Firefall), Bob Margolin...

Ζephyr was a crazy, crazy band!! Being as creative as possible...  jamming... playing music as if your life depended on it...Fighting... It was all about the music and nothing but the music...sometimes... I would do it again in a second...you just had to be there!

Do you have any amusing tales to tell of your work with Tracy Nelson?

Well, I don’t have much to say about Tracy, she was & is a very nice person, but I had little contact with her. I auditioned, got the gig, rehearsed with her...then I got fired... Oh well it was fun while it lasted!

Any comments about your experiences with Otis Taylor Band?

It was great...Especially when we toured Europe! Missing the plane in Turin Italy, so to get to Marseille France we had to fly to Rome ,then Paris and finally to Marseille. It was weird, and then we played a great show with Willie De Ville. 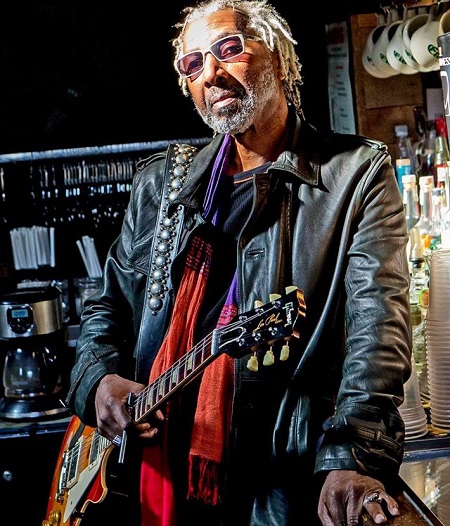 "Get with it and don’t stop...You know if you’re good, so don’t let knowbody bring you down."

I have learned from everyone! Records, live shows, videos...you name it...I can always learn something new. I never stop listening and that’s where one learns. It doesn’t matter what style...guitar & music are guitar & music...listen...listen!

Who are your favorite blues artists, both old and new? What was one of the last record you bought?

It’s real music...but it keeps trying to change...which I think is good...it has to move forward with out forgetting the past...It has to stay relevant, fresh and meaningful...It’s not “bar music” it’s an art form!

Are there any memories of all GREAT BLUESMEN you meet which you’d like to share with us?

I have many memories of many Bluesmen...playing cards with Muddy Waters was a great one...but the one thing they all had was that they were sincere about the music...& the life. 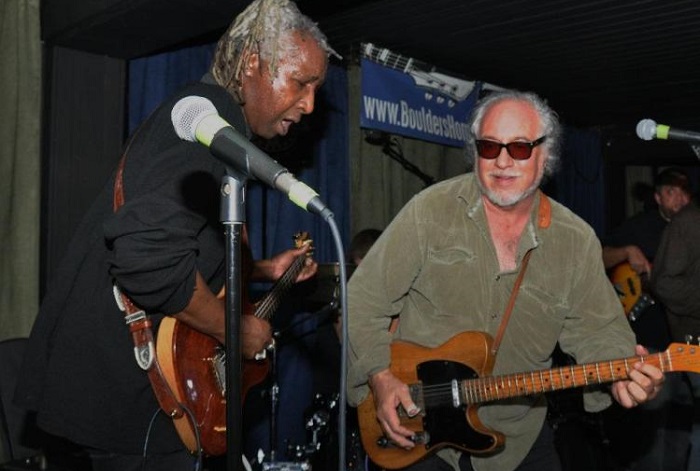 "It’s real music...but it keeps trying to change...which I think is good...it has to move forward with out forgetting the past...It has to stay relevant, fresh and meaningful...It’s not “bar music” it’s an art form!" (Photo: Eddie "Devil Boy" Turner & Bob Margolin jammin' on stage)

Just gets harder, so I just work at it harder.

The most satisfaction I have ever had was the ability to play the music that’s in my heart & soul, without concern, only the feeling...From the heart to the hand to your ears.

I miss the honesty, the realness, the in your face and you’re going to like it approach of the past. I have no fears… my hopes are my own.

What is the impact of blues music and culture to the racial, political and socio-cultural implications?

Blues music is currently an American musical form or style and today has nothing to do with it’s past. There are exceptions … musicians that have an actual historical link, but they are few. Most only know what they have read or seen in a documentary…but few have lived and truly experienced the realities of this cultural form. But then, some say that today we are again living in the past as we look at the new/old injustices that are again upon us …. 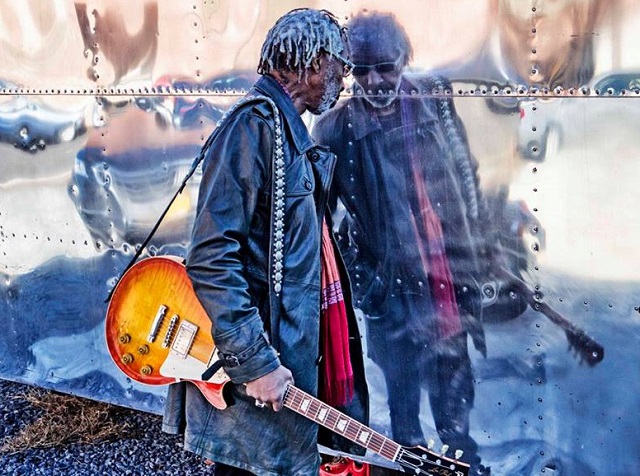 "How deep I can go into myself and see the monsters that dwell there and still come back satisfied and alive. Philosophy? Steal everything, but don’t let anyone know." (Photo: Eddie Turner)

The hardest obstacle for me is, and has always been, being me! I have my own ideas on how to recreate what I believe in musically and in life. I continue in my own path because I know I am right …. Eventually.

I would spend the entire day in Rome. It is such an exciting city the history , the modern outlook, the people, food, culture… but the same can said of, New York, Barcelona, Berlin, Athens & Chicago!!

How is a Latino in the US to play the blues? What would you ask Fidel Castro?

What do you think of Latino & Caribbean folk music (Kumina, Son, Boleros, Guajira etc) & how close are to BLUES? 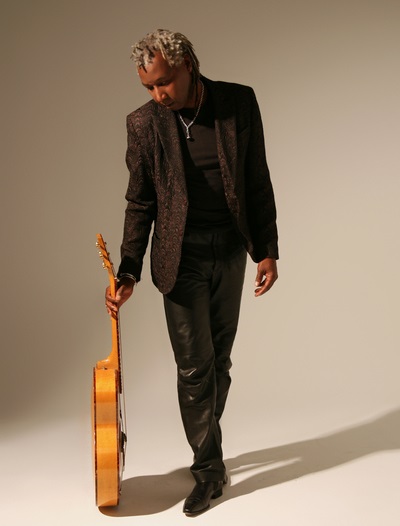 Get with it and don’t stop...You know if you’re good, so don’t let knowbody bring you down.

"I miss the honesty, the realness, the in your face and you’re going to like it approach of the past."

What your opinion about “The Devil Music” (Blues), how you would spend a day with the Devil at the Crossroad?

Drinking and playing cards...Trying to beat him at his own game...

What are your plans for the future? Do you have a message for the Greek fans?
The one message is never stop loving the blues in all of it’s forms and maybe, just maybe I will be fortunate enough to perform in Greece!

If you could change one thing in the musical world and it would become a reality, what would that be? How do you see the future of blues music?

I would perform more! That the blues will always be with us.