An Interview with guitarist Al B. Blue: The Blues originated on the farms and plantations of the Deep South

"Blues is a truly American Art form that should not be lost.. It can evolve and change, but it should not go away or be lost..."

Al B. Blue: From Mississippi to Jamaica and back to Funkytown

Albert B. Blue Ingram dishes up hypnotic, funky, driving rhythms on his guitar. Watch out when he pulls out that dobro with his slide... the wondrous sounds will stop you in your tracks! 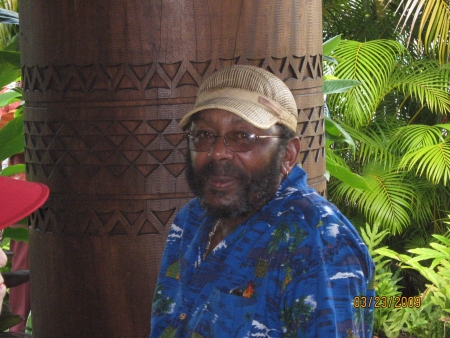 Al B. Blue also is a classically trained pianist, and back in the 50's, formed a street corner doo-wop group in Camden, NJ, where he and his buds took street-corner crooning all the way to the radio! Later in California, he picked up the guitar, paid his dues and started playing major clubs in Los Angeles. From there he joined BIG BLACK AND THE CONGREGATION, an Afro-funk band, then toured the West Coast with CURTIS MAYFIELD. Later, he was offered a position playing with a blues band touring the infamous “chitlin’ circuit”. That’s where his blues began and let me tell you - It will never end!

Al, what made you fall in love with the blues music & who were your first idols?
I think the passion with which Blues people showed, whether they were making a lot of money or almost nothing, they really put themselves wholly into the music. Some of my early influences were more Jazz people,but Jazz did come from Blues
The King's (Albert, Freddy and of course B.B) plus Jazz people like Wes Montgomery, Miles Davis, and John Coltrane were important also..

How do you describe your music philosophy about the blues?
Very simply put, Blues is a truly American Art form that should not be lost.. It can evolve and change, but it should not go away or be lost... 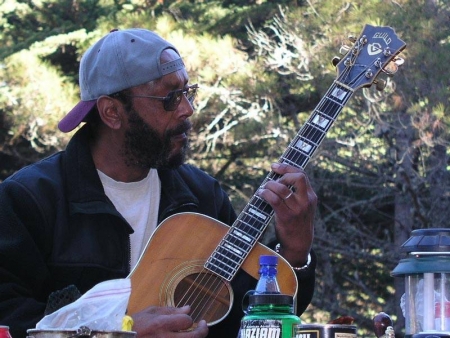 What does the BLUES mean to you & what does Blues offered you?
Blues is really about life. From the Clint Eastwood movie, the Good, the Bad and the Ugly parts, Blues covers it all, and provides really, really good therapy. Going to a good Blues show is a lot cheaper than a session with a Headshrinker....

What experiences in your life make you a GOOD bluesman?
Just growing up where I did, (South Jersey) in a working class family watching the daily struggles gave me a good foundation. There were happy times, sad times, and ugly times, but things worked out in the end, and I think I'm a product of that situation..

Do you remember anything from the tour with Curtis Mayfield?
Unfortunately I did not have much personal interaction with Curtis other than "Hi how are you" etc. but just being around him was quite an honor for me, since I had listened to and loved a lot of his music..

Some music styles can be fads but the blues is always with us.  Why do think that is? Give one wish for the BLUES
I don’t think Blues will ever die because people still get "The Blues" for various reasons and In places other than the South.  The economic situation is not good in many places and in one form or another people have to have some sort of outlet. Putting your sorrows in a musical form like the blues provides some relief for many of us. My wish for Blues is for more Musicians to embrace and expand the concept, Blues like many other Art forms will evolve and maybe change a bit, but as long as there are people there will be some form of Blues... 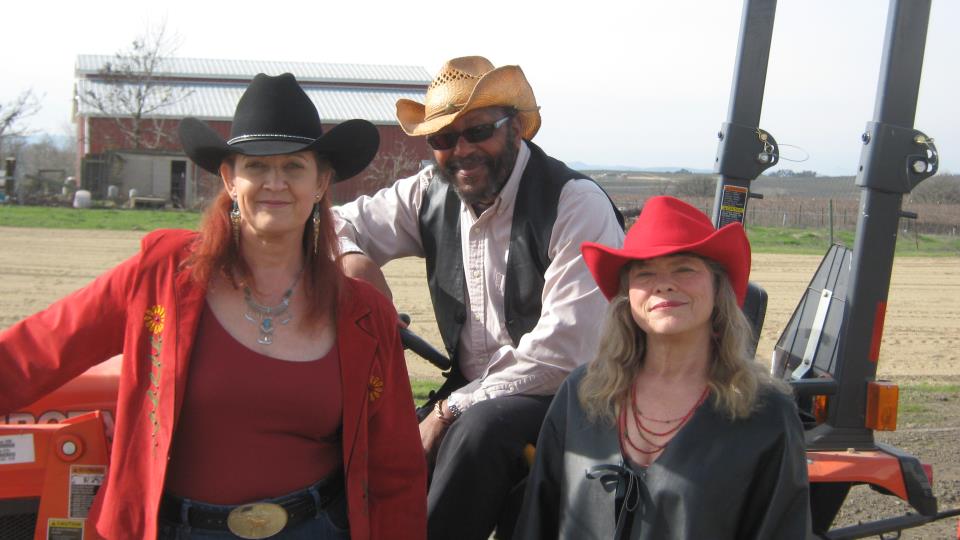 What is the “think” you miss most from 50s and Corner street band of Camden NJ?
In the Camden days it was just a bunch of teenagers having fun, chasing girls. Nobody thought seriously about music as a career, just something to show off with, since none of us at the time were High school jocks, but still wanted to impress the girls...

Are there any memories with BIG BLACK AND THE CONGREGATION, which you’d like to share with us?
For me it was about playing for people who were there to hear us, as opposed to a bar situation where most times you were sort of a live jukebox, Even as an opening act people paid attention to what you were doing.

Would you mind telling me your most vivid memory from Los Angeles, CA?
A couple of things come to mind, the first was the Northridge earthquake that broke my waterbed and freaked out my Cat who vanished when the shaking stopped and was never seen again, and having two Guitars stolen, both Gibsons one being a rare Firebird from 1959 that put a stop to my playing for a while, and actually made me vacate L.A. and move to the Central Coast of California where we live now.. 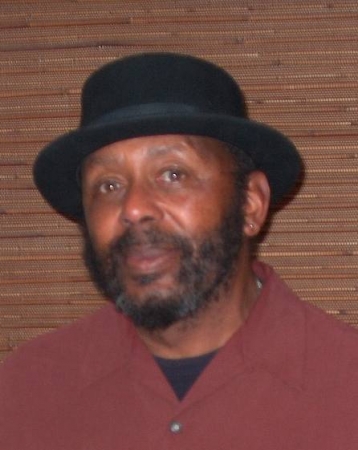 Do you remember anything funny or interesting as a street musician?
I really did not consider myself a "street musician".  I'd rather be in band situations. I did live in Venice Beach for a while and we had a little three piece group that would set up in a park and play till the police stooped us, then we would go to another park and do the same thing,  We did it for fun and tips and of course Beer !!

I wonder if you could tell me a few things about your experience from the road with the blues
My "road work" was mainly bars in and around California, although Val and I went to Bangkok a few years ago to visit her daughter, and ended up at a Blues bar, where all the guys in the band did not speak any English but understood Blues quite well, and when Val mentioned some Janis Joplin tunes we knew they played them pretty darn good....I did get an offer to play with a Blues band that were going to tour what was called The chitlin circuit in the deep south, but I had other commitments at the time and could not do it...I think that would have been an intense learning experience..

If you go back to the past what things you would do better and what things you would a void to do again?
I would have liked to write more, but that is a skill that requires a lot of effort, although it comes easy to some, it never did to me. When I talk about writing I'm talking about lyrics... Playing was always the easy part.  coming up with new idea's was not ever easy for me...I always seemed to have a type of sixth sense when it came to avoiding bad situations, so I never found myself in really bad situations, but even bad experiences can be helpful if for no other reason they show you what NOT to do, or be a part of. 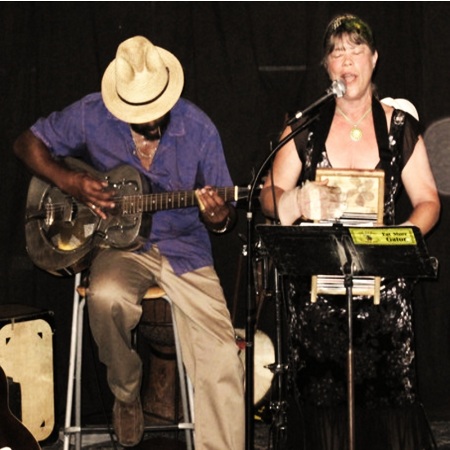 What characterize your projects with Valerie Johnson, what advice has given to her about the blues life?
Valerie's spirit is so infectious you have to be completely engaged when you work with her, no matter what the project is. It’s quite a lot of fun...
Either Val or I lived a "Blues Life" like some of the artists in the 30's & 40's when things were really tough. I came from a working class family, and she had a Military father who later was an engineer, so our struggles were very minor compared to some of the early Blues artists life My advice about the "Blues life" to her was very simple. You can sing about it but like an actor who plays various roles in films, when the film is done you go back to being yourself. Val no longer drinks or smokes, but can still belt a song about bad stuff and make you swear she is living a hard life, but it’s only a movie...

Which of historical blues personalities would you like to meet?
.. I think Robert Johnson and T-Bone Walker, they were VERY important figures who I think were responsible for the Blues forms we now play.. I'm sure there were many unsung and forgotten folks but those two come to my mind right away...

From whom have you have learned the most secrets about blues music?
I learned an awful lot from friend of our named Karen Tyler. She's a singer songwriter and Piedmont style guitar player. She, and Valerie have done much researching into Blues history, mainly involving women but, the Blues in general. It's amazing how many people never got any sort of recognition despite years of work, and its kinda the same way now.. 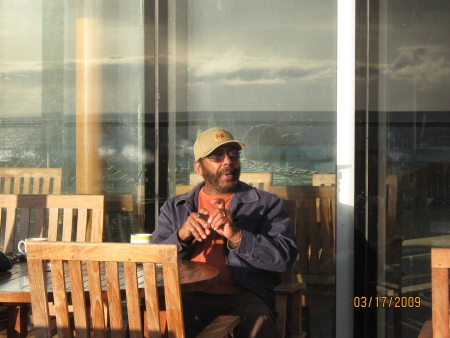 Do you know why the sound of the blues is connected to the Afro American culture?
The Blues originated on the farms and plantations of the Deep South.  Most of the people who worked on these plantations and farms were Black. Those folks worked and lived in the harshest conditions, but managed somehow to survive and create an art form that is “The Blues "... It has evolved due to migration from the South to the factories of the North, Midwest, and even the West Coast and beyond...

What advice would you give to aspiring musicians thinking of pursuing a career in the craft?
To aspire to play Blues, you have to realize that the chances of commercial success are very slim indeed. You have to really love playing or singing Blues, You have to be willing to work for little pay or recognition just because you LOVE to do Blues music. With that said there are still a lot of people who really do love the form and will perform any time and any place they can, and LOVE doing it...

You have pretty interesting project BLUES FOR KIDS, where did you get that idea?
Blues for Kids was Valerie's baby from the beginning... It was the result of a conversation with a teacher friend who was lamenting the loss of music in the school systems... Valerie found out about a organization called The Creative Children’s project and it kinda started from there.  This group provided private funding for Arts and Music projects, in public schools, and we became people who were willing to go to schools to present music, and our focus was on Blues History etc. We did make sure to say Blues and by extension Jazz and even Rock and Roll originated from the Blues. Blues is the only truly American music. Most other forms of music originated in Europe or other places... Which was the best moment of your career and which was the worst?
My best was probably going on stage with Big Black and performing for the first time to a very large audience. Most of the time before that, it was small clubs and bars. Boy what a difference a big audience makes, the energy is hard to believe...

The worst moment.. it had to be the stolen guitars event, it was devastating at the time..

How has the music business changed over the years since you first started in music?
I think in some ways its more open now. Independent artists can put out CD’s etc. without the backing of a record label and have a measure of success. Being "signed" is not as important as it used to be, but label involvement does offer benefits when it comes down to promotion and touring... 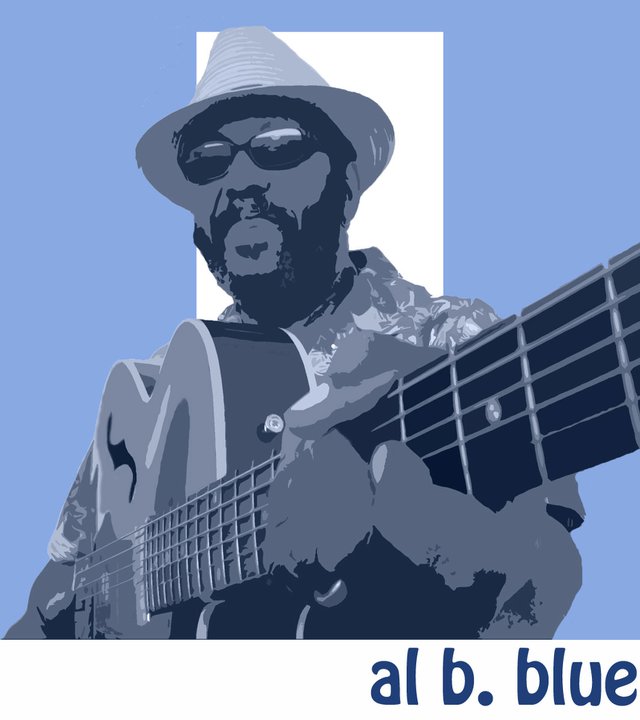