An Interview with the Harpoonist and the Axe Murderer, a Canadian roots blues duo

"The blues to me expresses the depths of the soul. It’s shaking out the demons."

The Harpoonist and the Axe Murderer

The Harpoonist and the Axe Murderer is a finger-pickin’, foot-stompin’, harp-blowin’ roots blues duo out of Vancouver. Drawing influences from the old masters and innovators like John Hurt, Muddy Waters, and Robert Johnson, their music tells rich tales of midnight trains, black cat bones, highwaymen and a time when song was a simple expression of the soul. 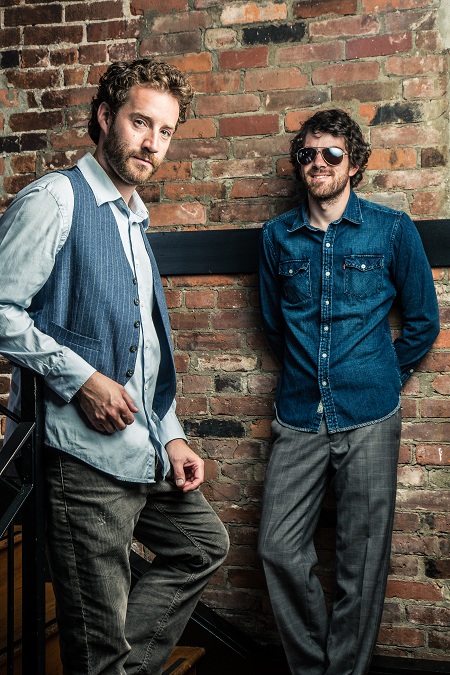 Shawn Hall (aka ‘the harpoonist’) grew up in Toronto, immersing himself in the local blues scene and eventually forming the band ‘Tied to the Tracks’. Matt Rogers (aka ‘the axe murderer’) grew up coping licks from his father’s collection of BB King records. Both have since become renowned producers working with Mark Berube, Ben Rogers, Dirty Bottom, Gordie Johnson, CR Avery and the VSO. Together, they have returned to their roots and the roots of the music that surrounds us everyday.

In fact, The Harpoonist and the Axe Murderer is more like a sweaty fling between a sack full of harmonicas, a mess of foot percussion, and a very greasy Telecaster. Shawn Hall and Matthew Rogers say they’re making blues for a changing world, but a fan put it even better: this is ‘blues that gets you in the crotch.’

It’s also blues that gets rear-ends on the dance floor, while earning praise for its ‘decades-deep blues style’. Combining the raw swagger of bands like The Black Keys and The White Stripes with a deep love for the roots of the genre, HAM reminds us that this kind of music was always supposed to talk to our nether regions. And if a lot of the blues made today seems a little limp, HAM finds its answer in the innovation that was at the heart of greats like Robert Johnson, Blind Willlie McTell and Muddy Waters. The duo has played festivals all over Western Canada, including The Beaumont Blues Fest, The Powell River Blues Festival, and The Gastown Blues and Chilli Festival. Along the way, they’ve shared the stage with some of the world’s finest blues acts, including Jim Byrnes, Dick Dale and MonkeyJunk.

Matthew: My dad was a rock drummer in the 70’s. He basically gave it up when I was born and got a real job. This is kind of ironic. I grew up with him playing drums around the house and he was my idol when I was a kid. At 13 I went to summer camp and witnessed my camp leader playing ‘under the bridge’ and ‘enter sandman’ on a red Strat. I thought it was the coolest thing ever. I bought my first guitar that fall and also bought my first tape - Led Zeppelin IV. They were my idols along with some of the blues masters like B.B. King and Albert King and Freddie King.

Shawn: When a cellist walked into my classroom in grade 4 and played the them to the Steven Spielberg film Jaws...I thought how those 2 notes could captivate me so much, I simply had to try it. My 1st idols were the Rolling Stones, Bob Dylan, Peter Tosh, and Sonny Terry & Brownie McGhee. 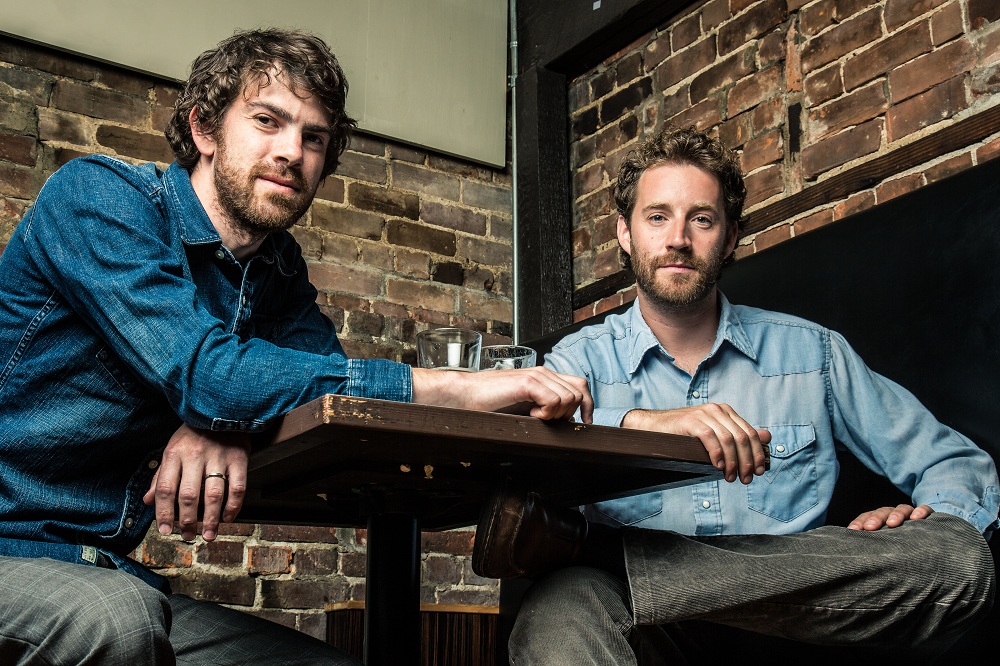 What characterize the sound and progress of The Harpoonist & The Axe Murderer?

Shawn: The simple fact that only 2 people are making as much texture as possible with their hands and mouths.

How do you describe Matthew Rogers’ music philosophy”?

Play your heart out. Treat music as an art. Work hard and thrive.

How do you describe Shawn Hall’s music philosophy”?

Intuitive follow your gut not your brain...the brain always screws you up when performing

Matthew: The blues to me expresses the depths of the soul. It’s shaking out the demons.

Shawn: I've learned that many of my hardest experiences I’ve had can transcend themselves thru this form of expression, thus venting that emotion and poison from my spirit. The blues is life, its guts, its lusts, its losses, grief, and redemption.

Matthew: Best – standing on stage at the Orpheum in Vancouver, BC after having the Vancouver Symphony Orchestra perform one of my pieces to a sold out crowd.

Worst – I was playing a gig with Mark Berube and I was so sick that I had to leave the stage and lie down at the back of the club.

Shawn: The best moment was probably this summer playing in a Hall up at the Kispiox Music Festival...it was without a doubt the hottest show ever, where you could smell every drop of sweat on everyone in the room...it was truly a religious experience.

The worst was playing bass in a blues band in the suburbs of Vancouver at a sports bar where they projected the hockey game thru the band onto the wall behind us...lowest point in my career for sure. What experiences in your life make you a GOOD musician, songwriter and bluesman?

Shawn: I'd hate to say only the bad ones, but they do tend to make great fodder for music. Walkin and staying tuned into my community are very important for me.

Matthew: The most memorable gig is when Shawn Hall got a call at the bar in Banff from his girlfriend of 3 months saying that she was pregnant. He was pretty thrown off. We still had to get up and play our 3rd set. It was one of the best sets we’ve ever played.

Shawn: Opening for Taj Mahal this summer, and performing after Canadian legendary punk rockers SNFU at The North Country fair at 2am...umm let's just say we're a blues duo so we were shaking in our boots.

What's been their experience from “studies” with Jim Byrnes, Dick Dale and MonkeyJunk?

Matthew: Seeing how other performers rock an audience is always a valuable experience.

Matthew: From each other.       Shawn: Jamaican Culture 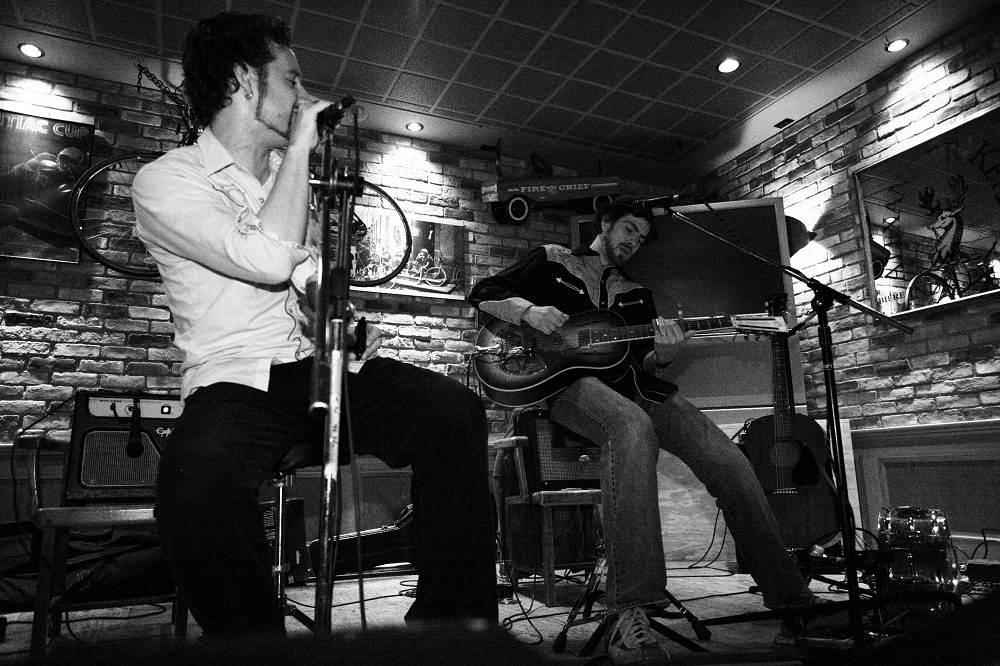 Matthew: That is because the blues is the basis of rock and roll and so many other styles that stemmed from it. It’s the heart and soul of music that has come out of it. People can still relate to it.

My one wish for the blues is that it will continue to evolve and not simply be a preserved style, but something new and fresh.

Shawn: I wish the blues could continue to grow and not just preserve as a museum piece.

From the musical point of view is there any difference between Robert Johnson, Blind Willie McTell's era and nowadays?

Shawn: There seem to be less innovators that are getting the recognition they deserve these days...far more garbage for people to listen to = listener fatigue

Shawn: If your girlfriend calls you at the bar you playing and tells you she's pregnant...whatever you do, do not take your eyes off your bandmates for the rest of the night, and prepare for the greatest set of your life.

Shawn, do you know why the sound of harmonica is connected to the blues? What are the secrets of “harpoon”?

The Harpoon comes from a line in Kris Kristofferson’s song, where he says “I pulled my harpoon from my dirty red bandana”

Matthew: Happiness is having a guitar tech and a tour bus.

Shawn: To be bunkered down in a cabin for a month with an instrument maker and gear wizard creating new gear just for our recording taking place live on the spot.