"The Blues helped me to get my hidden inner sensitivity, to express my feelings without any kind of shame or fear, to laugh or mourn without permission."

Ariel Salvatierra: The Blues Is Alright

Harmonica player Ariel Salvatierra was born in Buenos Aires, Argentina in 1968 is the younger of two older sisters. At the end of high school, Ariel was interested in pursuing a college career in economics, but had to desist because from 6 months of age he began to be affected one Spinal Atrophy Type 2 and transport problems at the time had to desist from do it. Her mother (who died when he was 17) was native of Santiago del Estero a region of Argentina as his dad. But in the case of music influenced him his mother who was a music lover and loved to sing. On the parental origin Ariel listened much folklore, region nature sounds of Argentina. Music says that until today have in their veins. When he was a kid, mom Ariel, bought a harmonica, but he did not give any importance and lost it, but his parents always watched programs Folklore and one day those discovered Hugo Diaz and glared, then discovered that the house was a disc Chacareras that had the same sound and there discovered Paco Garrido. That's when he realized that reached deep sound of that instrument, and now accompanies him everywhere: harmónica. The influences of his mother remained with Credence Clearwater Revival, The Beatles, Johnny Rivers and remember that in the early 70s, at a picnic he surprised a disk that was sounded in an orange old Chevy car…it was Manal´s music local Blues Band. That time has until now recorded as a picture. Eventually Ariel began to make their own musical material and reached the rock. Her favorite musicians were and are Seru Giran, all the work of Charly Garcia, Beatles, Zeppelin, Deep Purple and Pink Floyd. At about 20, Ariel listened "Is not Gone 'N' Give up on Love" by SRV, and later saw Clapton with Mick Taylor in Argentina and felt he started liking and interest in the blues. After he came to BB King, Albert King, Buddy Guy, and John Mayall. It was with Mayall that caught the attention of the sound of the harmonica. He listen to Cotton, Robinson, Horton, Sonny Boy Williamson, and others. At the end of the secondary and with mobility problems as says Ariel himself became "expert Remote Control" and tried different ways to make a living: He sold bread from the house, he answered the phone to an introductory, sold clothes but nothing prospered.         Translation & Bio by Laura Lagna-Fietta

I discovered the blues about my 20 years old, after the death of my mother. I was touched emotionally by the emotion of the visceral wrenching sound of that music, and helped me to get my hidden inner sensitivity, to express my feelings without any kind of shame or fear, to laugh or mourn without permission. The Blues made me listen to music differently, and motivated me to move from being passive to someone who wants to touch the listener. In my life there was and is a moving source along with other musical genres.

How do you describe Ariel Salvatierra sound and songbook? What characterize your music philosophy?

I could qualify my repertoire as "warm", dominated ballads and popular songs, national from my country Argentine and international, based on my tastes as a listener. As far as my sound is smooth without virtuosity but with blood and heart. In my point of view, the role of music in addition to entertain is to motivate us in several ways. When the listener is humming the riff letter or when you drop a tear, or move the foot, accompanying the beat, it means achieving your goal, whatever the genre. 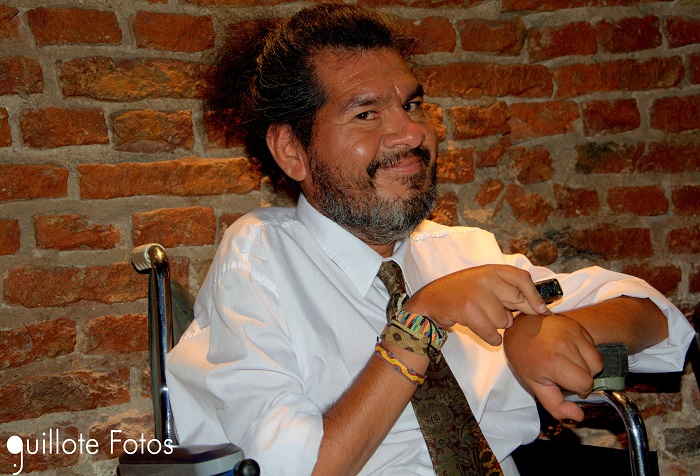 "I think I miss that 'sound furrow of the vinyl LP’s' is strange, but I miss that ..."  Photo by Guillote

The blues is the root of many genres of today, I think many listeners begin to investigate the history, and obviously get the blues. They listen and are surprised how this played music simply can influence, convey many emotions and experiences show much passion and accomplish all of this in 100 years, overcoming racial, ethnic and cultural barriers, especially considering it began as a form of relief of an oppressed people in slavery. This captures the attention and love ... Remember that great rock bands played blues in the beginning, like Zeppelin, Rolling Stones, and have done covers of classics, which gave us wanting to hear the original versions. With the ease of internet access, the old stuff is at your fingertips.

I think I miss that "sound furrow of the vinyl LP’s" albums is strange, but I miss that ... Maybe the technology gained much ground in the sound and makes it sound less messy and more "clean". As a "fear" about the future, could be that the musicians stop playing traditional songs and would get lost. It could also be that the same traditional songs can be  altered so much its trying to be "modernized" that can´t be recognize in the future.

Looking ahead, I have understood that Billy Branch has a curriculum in schools, where he teaches blues, from the history of the genre in parallel with American history. Students perform instruments and write original lyrics based on old structures and rules of the genre.

Joe Bonamassa performs something similar with The Blues Alive Foundation, with the idea that future generations inherit the blues. It would be good that each country and region can mimic this initiative to keep autochthonous cultural values, and thus maintain its own identity. Bonamassa, Gary Clark Jr. with new exponents are supported globally by dedicated bluesmen like BB King, Eric Clapton and Buddy Guy. This makes envision a promising future ... 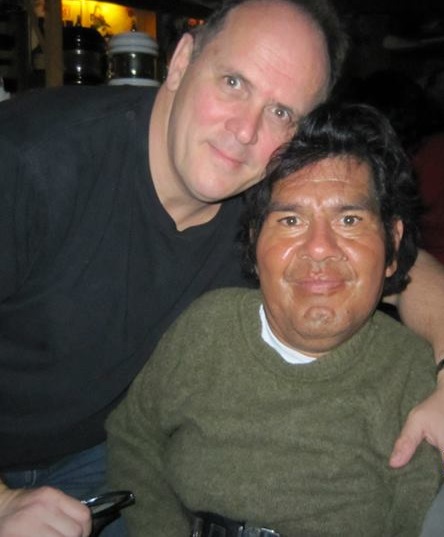 Since the beginning of the movement of rock in Argentina, there were Blues Bands in Spanish language. The first one was Manal and Pappo´s Blues that formed an incredible guitarist: Pappo. In the mid '80s and the' 90s began arriving to country musicians like John Mayall, Eric Clapton, Mick Taylor, BB King and others. Unfortunately, months before coming to our land, died Stevie Ray Vaughan, who was touring with Clapton. These visits led many local  bands have the time to show the mass public, as Memphis La Blusera, La Mississippi, the 2nd version of Pappo's Blues, Durazno de Gala , and others. In the '90s was a good time for the blues. And there are musicians who celebrated 25 years of career like Daniel Raffo (photo) with his band King Size y La Mississippi At present there are many bands playing, but I think "that was THE moment."

Although I am no expert on the subject, I think here came first the British blues, because as said before, bringing in British bands were heard early bluesmen. Anyway, it's not a copy, but the musical structure is respected, has samples of our culture. I talk again about Manal, because his music also is clearly has tango ´s influence.

There is a band called Kapanga, which is not blues, but I enjoy a lot, and another is Blues del Sur, that its singer Matias Fernandez is very charismatic, a character that always puts a smile on your face, always!!

I admire Charly Garcia, I am excited to see how made ​​it out of the stage of self-destruction to reinvent and reversionary his musical work. When I see him live, I always drop a tear. Last year, I moved to see such legends as Bob Stroger and James Wheeler with their ages! These GENTLEMEN, enjoyed being on stage. Others rely on their ages in their home, they do not. They choose and they are active at a live music scene, giving themselves completely, and rejuvenating through his shows. In fact, Bob back soon to our country...

If I could, I would get to my feet and give a standing ovation… to name BB King, as the banner of passion for music. 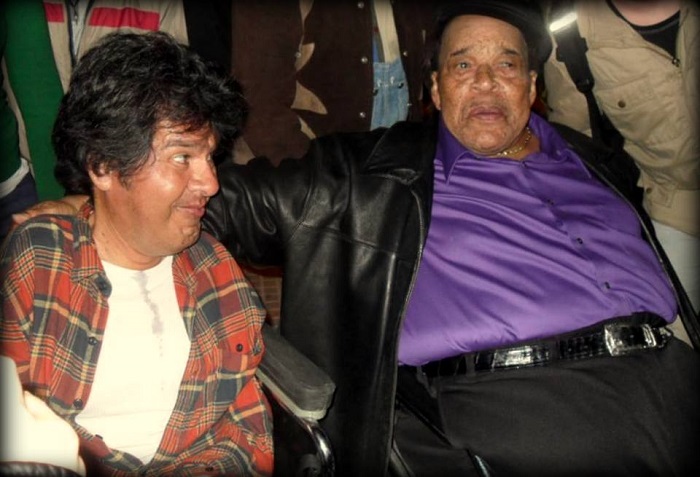 "The best advice was to study, to be one with my instrument, and especially fighting. And my advice is not to give up. Change your dreams to goals, obviously achievable, and put all their energies on achieving them." (Photo: Ariel & James Cotton)

Are there any similarities between the blues form and lyrics with genres of Argentinian folk music?

I really don't know English language, but I read some translated lyrics, and I see that both talk about love, heartache, the love for his homeland

If you could change one thing in local scene and it would become a reality, what would that be?

If I could change something is that government authorities recognize the cultural contribution that the musicians do. For example, we played in the streets; the city government has banned this activity on public roads, treating us as if we were criminals. In my case, have flexibility because of my disability, but there are colleagues who were robbed of instruments and sound equipment.

It is a question of valorization, and that would bring as a consequence they have more places to play, and that the work of the musician is valued, and rewarded financially for you to live in his career, his passion, and not have to resort to alternative employment to stay.

The best advice was to study, to be one with my instrument, and especially fighting. And my advice is not to give up. Change your dreams to goals, obviously achievable, and put all their energies on achieving them.

On the way will find many obstacles, they will lie to you sometimes, sometimes somebody will be discouraged you, but if you persevere you will reach it… And: Never forget about your essence, where you come from, and who you are ...