"Despite the dramatic political, religious and cultural differences between people around the world, somehow Blues is a common language that transcends what divides us."

Jesse A. Finkelstein: Blues Is In The Air "One of my most meaningful recent experiences was interviewing Grammy Award winner David Crosby. (Photo: Jesse with David Crosby)

Blues Radio International is not funded or controlled by any government, any religious organization, or by any major (or minor) broadcasting conglomerate. At this time, the entire cost of the broadcast is supported by individuals who desire to bring the best in Blues music to audiences who otherwise would not be able to hear it. BRI offers a unique opportunity for Blues music artists to gain international exposure to a potential audience of millions. The Shining Stone Music Group, Blue Duchess Records, and Shining Stone Records were founded by award winning guitarist Duke Robillard and Jesse A. Finkelstein. Duke Robillard personally produces most of recordings, and Jesse Finkelstein serves as Executive Producer. They will balance releases between the classic and the contemporary, honoring the history of America's original musical art forms of blues and jazz while looking to the future of each genre with eager anticipation.

What do you learn about yourself from the Blues culture and what does the “Blues” mean to you?

The most important thing that I have learned is that Blues truly is universal music. Despite the dramatic political, religious and cultural differences between people around the world, somehow Blues is a common language that transcends what divides us.

How do you describe Blues Radio International?

Blues Radio International is the world’s only shortwave radio broadcast, streamed simultaneously on the internet. We broadcast to confirmed listeners on six continents, in 133 countries. Our live music comes from the soundboard of the Blues Music Awards, from a premier South Florida venue or from private performances in our Studios.

Shortwave radio reaches a vast audience far beyond the internet--people living in great poverty, in war zones, or in countries where internet access is controlled by the government. These are the people who really can benefit from the healing power of the Blues. We are honored to help bring it to them. Many in our audience are hearing Blues for the first time-- but they come away hooked. 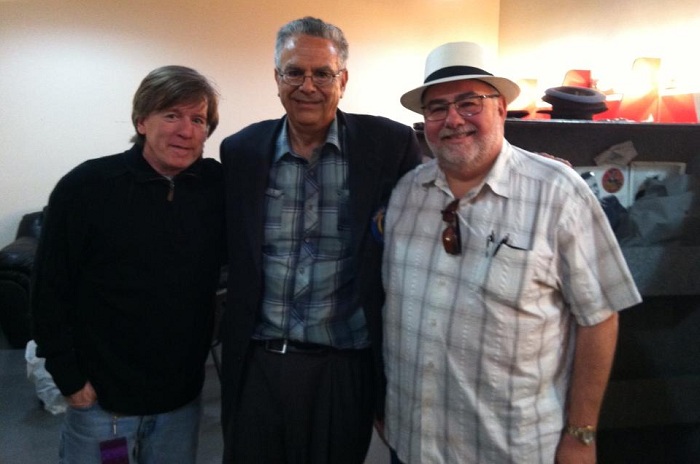 "Blues has a devoted following because it is part of our souls. The simple, but primal, structure of Blues music is not unlike a heartbeat.  That makes it universal." (Photo: Jesse with Duke Robillard and  Donnie Herron)

Award winning guitarist and producer Duke Robillard and I founded two labels with a very particular focus. Shining Stone Records is our Blues label. We have a variety of artists, including Sunny Crownover, award winning pianist David Maxwell, and world Blues guitarist Nuno Mindelis. Our third release--guitarist Paul Gabriel’s “What’s the chance”-- received a  2014 Blues Music Awards nomination.  Our jazz label, Blue Duchess, features sax icon Scott Hamilton, Duke’s own jazz trio, and vocalist Mickey Freeman.  The focus always has been quality rather than quantity. We pay our artists the highest percentage of any similar label, and we make a donation to charity for each CD sold. This is hardly a formula for making money, but if you listen to the music, and see the charities that we support, you will understand why we do it.

I have been privileged to learn from many names that would be familiar, and from some names that would you might find surprising. My friend Nuno Mindelis from Brazil, whom you interviewed recently, was born in Angola and now lives in Brazil, and speaks many languages. He carries deep Blues roots that have blossomed in countries one would not normally associate with the Blues.  Another good friend, multi-talented guitarist and producer Duke Robillard, helped me gain a deeper appreciation of how important Blues is in Jazz and every other form of popular music. I also continue to learn a lot from younger artists, like my friend Mike Zito, whose life is a demonstration of how Blues truly can heal, and help people recover from the worst addictions. But my first Blues lessons came as a young child, when my mother played some of the earliest Alan Lomax recordings, and introduced me to artists like Odetta and Josh White.  When we spent some time together, I learned that David Crosby’s mother played Odetta and Josh White for him as well.

To be true to yourself, and to follow your passion.  If possible, enjoy your work. "It sounds trite, but the adage is true: Blues is a feeling. The feeling is hard to describe, but as a great American jurist said many years ago about pornography, you know it when you see it. When you hear a true Bluesman, you know it." (Photo: Jesse Finkelstein and Johnny Winter)

You have come to know great bluesmen. Which meetings have been the most important experiences for you?

It would be hard to name which experience was the most important. Talking with Mud Morganfield about his father Muddy Waters, and sitting down with Johnny Winter both stand out. One of my most meaningful recent experiences was interviewing Grammy Award winner David Crosby. While most people would not associate David with Blues music, he is convinced that it is the fundamental source for our entire cannon of popular music. And it was David, inserting a line of Robert Johnson’s on the first Crosby, Stills & Nash album in 1969, who introduced countless white kids worldwide to Blues music.

What do you miss most nowadays from the old days of blues?

One thing we really miss is authenticity. When you listen to the Alan Lomax recordings, or to Othar Turner and the Rising Star Fife and Drum Band, the music immediately grips you. The rudimentary recording techniques are irrelevant. We have gotten so lost in our ability to manipulate things digitally that instead of gaining from technology, we have lost a lot. We have the tools to bring listeners incredible dynamic range in recordings, yet everything is highly compressed to make it louder on the radio, or to make our motor vehicles vibrate with the beat.

We have lost one of the most important elements of the great early recordings: occasional silence. Fortunately, not everyone has forgotten. Delmark Records released a recording last year by Studebaker John recorded on a 78 rpm disc. My friend Jack Gauthier, who does our recording for Shining Stone and Blue Duchess Records, uses two inch tape, and is not afraid of tubes. The sound Jack produces brings out the warmth of the classic recordings we all remember, but have a hard time finding today. 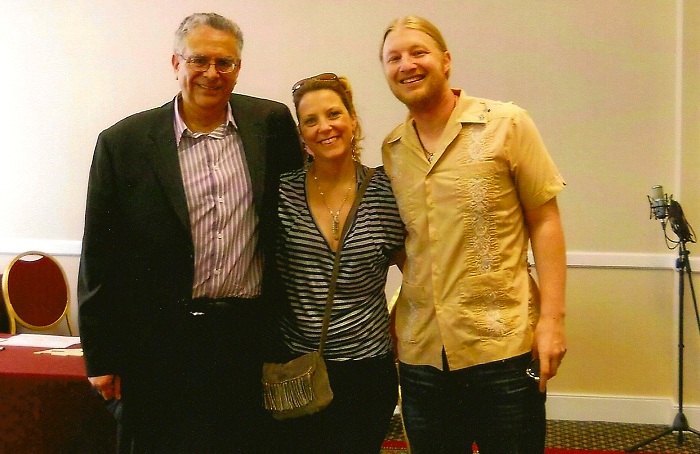 "Blues Radio International is the world’s only shortwave radio broadcast, streamed simultaneously on the internet. We broadcast to confirmed listeners on six continents, in 133 countries." (Photo: Jesse Finkelstein with Susan Tedeschi and Derek Trucks, 2012 Memphis)

How has the blues industry changed over the years?

I do not have enough longitudinal history with the music industry to give you the best response to this question. Bob Koester at Delmark and Bruce Iglauer at Alligator Records have taught me a lot. However, the fracturing of the traditional record labels combined with the internet has allowed many artists whom we never would have heard to bring us vibrant and new music.

It sounds trite, but the adage is true: Blues is a feeling. The feeling is hard to describe, but as a great American jurist said many years ago about pornography, you know it when you see it. When you hear a true Bluesman, you know it. I would hasten to add that “Bluesman” is somewhat of a misnomer. It would be impossible to compile a list of the most important Blues artists without including the great women who have made this music come alive, from Sister Rosetta Tharpe, to Big Mama Thornton, to Bonnie Raitt.

Why did you think that the Blues culture and music continues to generate such a devoted following?

Blues has a devoted following because it is part of our souls. The simple, but primal, structure of Blues music is not unlike a heartbeat.  That makes it universal. No musician plays Blues because the money is good. No one listens to Blues because it is on the radio 24 hours a day. Musicians who play Blues are making a sacrifice. People who love Blues have to seek it out. But because almost all of our popular music is derived from Blues, even people who would tell you that they don’t like Blues often discover that they do. 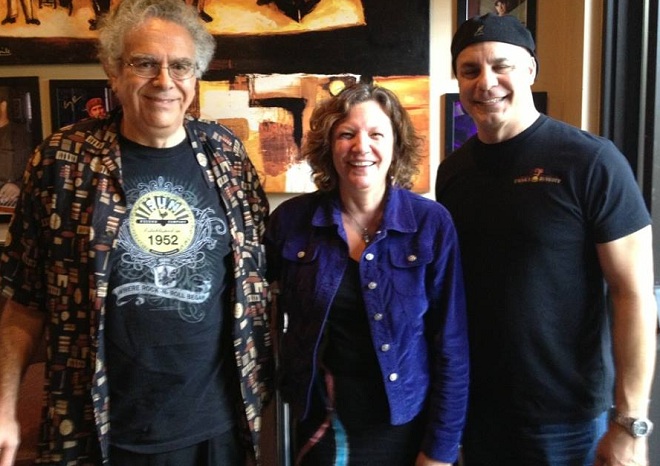 “To be true to yourself, and to follow your passion. If possible, enjoy your work.” (Photo: Jesse Finkelstein with Lisa Biales and Al Poliak)

I have many treasured  momentos that might be stuffed into a very large time capsule, such as a pickguard autographed by John Lee Hooker, and one of Roy Buchanan’s Telecasters. But far more important than any of these physical objects is the music itself. Thank goodness the music never will be buried in a time capsule and hidden from view, even temporarily. A great treasure of Japanese literature is the Man’yoshu, which is a collection of nearly 4,500 poems, written centuries ago. Some were written by members of the Imperial household, but many were written by commoners with little formal education. Yet the entire work stands as a testament to the collective creativity of many very different individuals. The great body of Blues music that we have been given is very much like the Man’yoshu.