"If I could get rid (or change) one thing in the musical world...easy, I would get rid of I-tunes...Spotify...Reverb Nation...and all those other 'electronic' pages."

Michael De Jong is a Dutch-American blues guitarist and singer songwriter. In the early days when he played with the Michael De Jong Band there were more influences in his music by Chuck Berry, Buddy Holly, Eddie Cochran, Jimmy Reed, relying on 1950s blues and rockabilly. Nowadays he plays (mostly solo) sober intimate songs using just a guitar and his hoarse worn out voice. He writes about his struggle with life, about women, love and the decay of society. De Jongs father was a Dutchman who fled the Netherlands during World War II. In France his father married a French Basque woman, that time De Jong was born. After the War, they lived in The Netherlands until the family immigrated to the USA in 1950. At the age of five De Jong grew up in Grand Rapids, Michigan, where he ended up as the foreign outsider. When he was six years old he joined the church choir, he never stopped singing again. 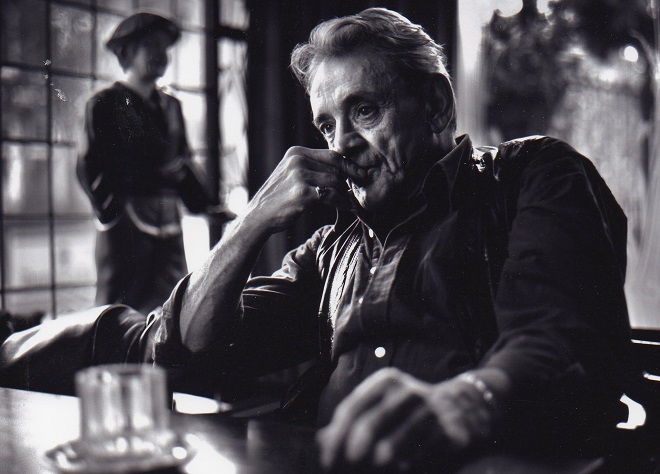 At the age of thirteen De Jong started playing the guitar without taking any lessons. This happened after seeing a concert of Johnny Cash. Five years later he started his first band The Nightwalkers, which backed Bobby Bare who shortly thereafter became successful with The All American Boy and the classic Detroit City. In 1967 he moved to Detroit. There he became a regular guest at the John Sinclair's Ann Arbor Blues Festival. Between 1970 and 1974 he traveled through the US. Finally he ended up in New Orleans. There he played in rather obscure clubs of Bourbon Str. daily for 13 months in a row. Often he was sharing the stage with Professor Longhair and Neville Brothers. He moved to California in 1975 where he stayed for 10 years in San Francisco. During that time he played with or supported Jerry Garcia, Paul Butterfield, Albert Collins, John Lee Hooker, Charlie Musselwhite, Albert King and other legends. Around that time De Jong joined blues legend Jimmy Reed's band as his guitarist. In 1981, De Jong recorded his first album "All Night Long". It was produced by Nick Gravenites and featured Steve Miller Band members Norton Buffalo & Greg Douglas. Three years later he was fed up with the American culture and, making an oath to himself never to come back, he returned to Europe. After travelling through Paris, London and Bremen he settled in Copenhagen, Denmark. Late eighties, early nineties De Jong stayed in the Netherlands, where he still lives these days. Michael newest album “Requiem For The Lonely” which will be released in September 2016 and on which some old friends will play like: Toby Gray, Alan Sitar Brown, Willem van Dullemen, Bobby Flurie and Charlie Musselwhite.

How do you describe Michael De Jong sound and songbook? What characterize your music philosophy?

My music philosophy is, ALWAYS for the People!!! When I create a new song I like to "give it a feeling" like a warm winter coat on a cold night...that FITS the listener perfectly...I like the people to FEEL that I DO understand what they are feeling...and I never, never forget that no matter how bad it is going for me at a certain point in time more than 1/2 the people in this complete world have it WORSE than I do...those are the people I try and reach.

What are the lines that connect the legacy of Blues from United States to Europe and Around the World?

What connects the blues worldwide....the pure honesty of REAL Blues music. The way the listener can "lose" themselves in the music. 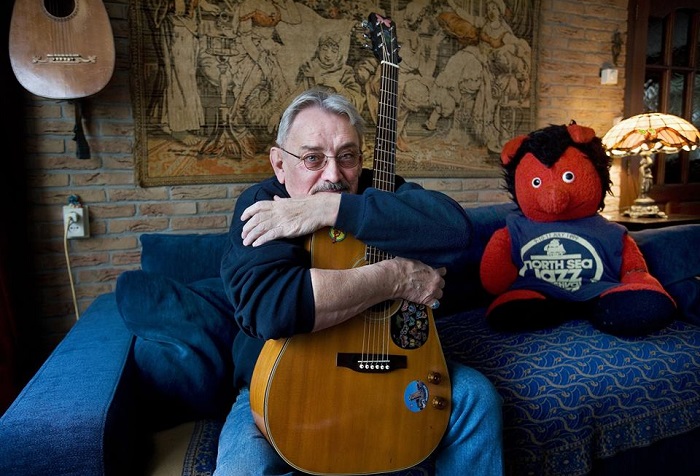 "If I could get rid (or change) one thing in the musical world...easy, I would get rid of iTunes, Spotify, Reverb Nation and all those other 'electronic' pages." (Photo © Michael de Jong)

One must be careful when one uses a word as a label…the word Blues is like that. I feel Blues is a form of music that is born and comes straight from the heart...it MOVES one...it is like an old Friend that understands what you are going through...what you are feeling. It is like an old winter coat that fits JUST right on those cold evenings and keeps you warm. The trouble these days is so many people want to put that into a Box...give it a label...shape it, mold it...manipulate it to make it easier to SELL to the masses...I have and always will try to keep my music away from all that bullshit. If the music is REAL...if the music comes straight from the heart...the people WILL find it...and the ones that find it will be moved...will feel they are not alone...that someone understands them, Now, if my music can do that then THAT is a good song!

Memories of the People you mentioned. Fantastic times!!! When they were the TEACHERS and I was the student...The greatest memories are those about Jimmy Reed ...especially the very last one. We were playing in San Francisco, my home town at the Savoy Tivoli...the Saturday night show was sold out and it was fantastic...after the show (and after everyone else went home) Jimmy and I spent some quality time in the dressing room (this was August 27 or 28, 1976)...Jimmy was tired...he got up, put on his coat...turned around and said to me; "Remember Michael...it ain't how ya sing the song it's how ya live the life...and if you ain't lived the live you got no right to sing the song." ...he smiled, put on his hat and walked out the door and went to Oakland, CA...where he would die in his sleep from NATURAL causes within 6 hours of leaving that dressing room. After the Funeral in Chicago, Mary Reed and I stayed in touch and SHE would tell me the real stories about him...and from the lessons of THOSE stories I would slowly, slowly start to write my own music. 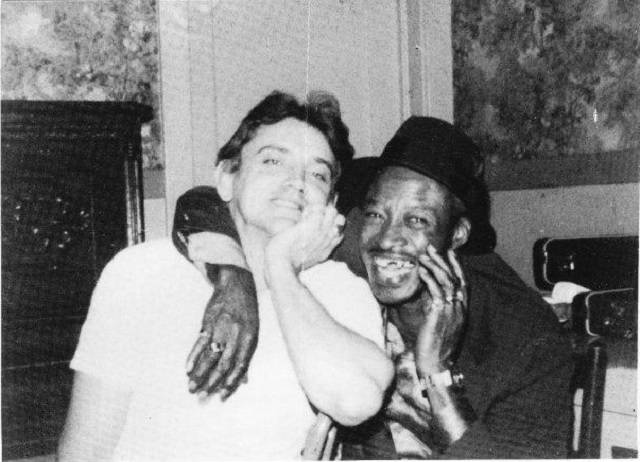 "What connects the blues worldwide....the pure honesty of REAL Blues music. The way the listener can 'lose' themselves in the music." (Photo: Michael & Jimmy Reed, Savoy Tivoli, San Francisco)

Best advice...that still has to be what Jimmy Reed told me in the dressing room of the Savoy Tivoli in San Francisco after a great sold out show; We talked...he got up, walked to the door, turned to me and said; "Remember Mike, it ain't how ya sing the song it's how ya live the life...and if ya ain't lived the life ya got no right to sing the song." He laughed, said see ya tomorrow and walked out the door...he would die in his sleep 6 hours later.

What has made you laugh from ‘Requiem For The Lonely’ studio session and what touched (emotionally) you?

What still makes me laugh about Requiem? The song; Ain't Done Crying Over You. It started out as a "funny" idea...Country flavored...then it got serious but still in its way stayed funny. What touched me the most with Requiem was the last track; Michael's Blues. I wrote that the morning before I went into the σtudio to record the last 2 songs of the Cd...the session was done and I asked Will Hesen, recording engineer,  to listen to "a song I wrote this morning." He listened and we then recorded it in one take (that kind of song)...I then contacted Charlie Musselwhite, told him about the song...he recorded his harp on it. When I listened to what he had done, I say in all honesty, I cried. There is was...PURE blues ...and it was the last track on the Cd...and it almost wasn't recorded.

Nick Gravenites was a trusted Friend that produced my very first album, All Night Long...that album is available as a FREE & LEGAL download via my website...along with 14 complete Cd's (out of the 19 Cd's I have released)... would you be kind enough to put the website address somewhere in the story you are writing? 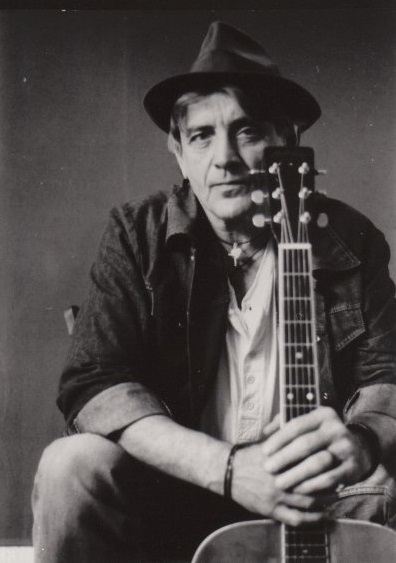 If I could get rid (or change) one thing in the musical world...easy, I would get rid of iTunes, Spotify, Reverb Nation...and all those other "electronic" pages.

"My music philosophy is, ALWAYS for the People!!!" (Photo by Christa Visser)

Make an account of the case of the blues in the Netherlands. Which is the most interesting period in local scene?

The Netherlands...well, I'm kind of a lone wolf here. I do not "hang out" or play with Dutch "blues musicians." With the exception of Willem van Dullemen...and a few of the old crowd from my early days in Holland when I was living rough on the streets of Amsterdam and hanging out at THE blues club there called the Maloe Melo. FANTASTIC, small little venue...it was the closest I came to feeling I was back in San Francisco playing at the Saloon in North Beach. If you come to Amsterdam and you want to jam some real blues...go to the Maloe Melo.

My hopes for the future...that we will ALL GET ALONG in this world...my biggest fear; the hatred will grow and grow until it consumes us all.

Is it easier to write and play the blues as you get older? What has been the hardest obstacle for you to overcome as a person and as artist and has this helped you become a better blues musician?

What I write and play...well, I don't really call the Blues (there is that "label" again)...I call it Michael's music...my music...and it is up to the listener to "give it a name." I just "create" the song based on what I am feeling.....and then I send that song out into the world. I try and be a voice...a voice for all those people who cannot put what they are feeling into words. That is what I hope my music is for The People.

A trip in a Time Machine; I would go back to when I was growing up and spend ALL the quality time I could with my Father, ...and yes, I would love to play in Greece!!!