"Music and dance brings humans together, so I see it as profoundly unifying - transcending race."

Gini Wade studied printmaking and graphic design at the Central School of Arts & Crafts (now Central St Martins) and worked as an illustrator and childrens’ book author for many years. She was a post-graduate student at the University of Aberystwyth from 2007 -10 and was awarded an MA in Fine Art, with distinction.  She specialised in lithography with Paul Croft RE. She is based in mid Wales where she makes prints. After working to illustration briefs for so many years, she enjoys the freedom to choose her own subject matter. Her work draws on myths and dreams, with a dash of the dark side. She is a DJ, and dance and celebrations inform many of her images. She also makes animations. She has taught printmaking in Hong Kong and Guatemala, and currently runs lithography workshops for the Sidney Nolan Trust, Herefordshire, and for Aberystwyth Printmakers. In 2014 she was accepted onto the plate lithography Summer Course at the prestigious Tamarind Institute, Albuquerque. Her prints are held in private collection all over the world, and also in public collections: the Wellcome Library Collection, the V & A, the Zuckerman Museum of Art, USA, the Ewing Gallery of Art, USA, Hunan Fine Art Institute, the University of Aberystwyth Collection, and the Contempory Art Society for Wales Collection. She is a director of Aberystwyth Printmakers and contributes articles to Printmaking Today.

What were the reasons that you started the artistic researches? How do you want your artwork to affect people?

I have always drawn & painted & wanted to be an artist since I was a child. I would like people to enjoy my work, but also to be stimulated by it, possibly to ask questions.

Where does your creative drive come from? What have you learned about yourself from your artwork?

My mother and aunt were artists, so I suppose it was in the genes. I worked to illustration briefs for most of my life, but now I am an artist/printmaker, I have to ask myself what is important to me, what bothers me, what images I want to put my time into making.

What has been the relationship between music and art in your life? How does music affect your mood and inspiration?

I have been a DJ since 1982, playing mostly dance music, so dance inspires much of my work. I like to play a wide range of thoughtful music when I am working – could be jazz, chill-out music, Jimi Hendricks, reggae, funk, soul, world music, blues, you name it. 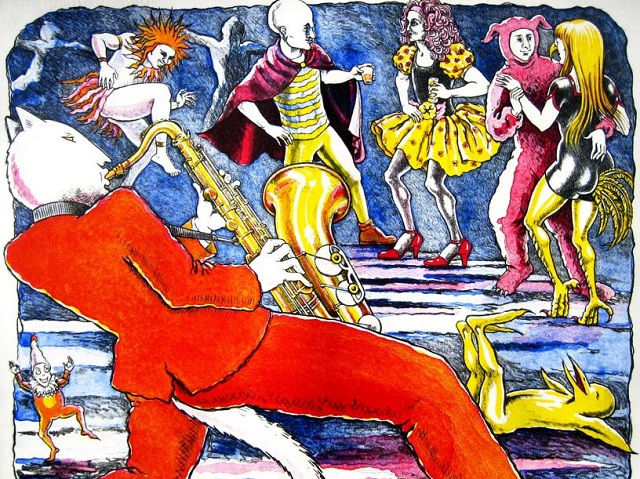 "The dangers of climate change are very much on all our minds at the moment. I would like to see governments and major corporations listen to scientists and protestors, then make the necessary changes so future generations can enjoy this world." ("Party On" / Artwork © by Gini Wade)

What do you miss most nowadays from the art and music of past? What are your hopes and fears for the future of?

I am a great believer in craft being as important as art, so I like to see manual skill in art and music. The use of computers in art & music is fine, as long as the work somehow avoids being mechanical. (A fault of much dance music) The use of ideas in conceptual art is also fine, but it has to be a very good & original idea, otherwise what’s the point?

The dangers of climate change are very much on all our minds at the moment. I would like to see governments and major corporations listen to scientists and protestors, then make the necessary changes so future generations can enjoy this world.

The sixties counterculture profoundly influenced my view of the world, and still does. I have travelled widely, and those journeys have also been an important influence. 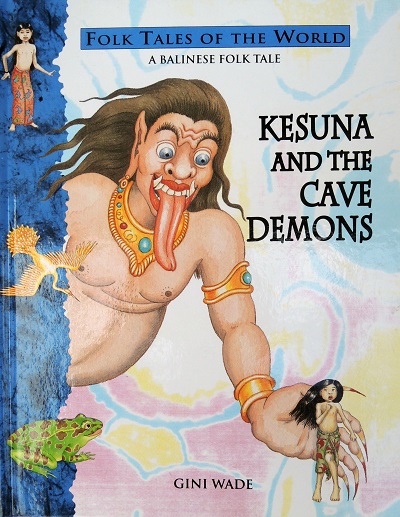 What touched (emotionally) you from the folk tales of world? What is the story behind ‘Lizard’ album's cover?

I believe that folk tales embody universal truths about humanity. So much can be done with a folk tale.

The story behind the Lizard album cover is that I was recommended to Pete Sinfield by a mutual friend, Brian Hart.  I took most of my images from the words of the songs. The other images are purely from my imagination. Pete trusted me to get on with the artwork without interference, which was great. King Crimson must have liked it as they used it.  Chris Blackwell of Island Records bought the original artwork & I think it used to hang in their office.  I have no idea where it is now. The inside cover is a marbling made by my partner Dave Wade, who can be seen on the cover playing the flute with Jimi Hendricks & Ginger Baker as my imaginary ideal band.

What is the impact of art, music and culture to the racial, political, and socio-cultural implications?

Music and dance brings humans together, so I see it as profoundly unifying - transcending race. As for art – why are totalitarian regimes so deeply afraid of experimental art? For instance, the Nazis banned all Modernist art as ‘degenerate’. After an initial period in Soviet Russia, experimental art was banned in favor of Social Realism (ie propaganda art controlled by the State) Art can only truly flourish when ideas and personal freedom are allowed to flourish.

I am very happy to be living in the 21st century (think modern dentistry & contraception & women’s rights) However I wouldn’t mind dropping in on 16th century Elizabethan England for a short time. I would take my phone with me so I could take photos & videos…

How big is the time machine? I could also take my entire vinyl collection and decks (and a PA).