"Rock and Roll is always with us because it makes you feel good, dance and drink and be your self"

Sonny Burgess and the Legendary Pacers

The band was formed in 1955 at Newport, Arkansas. They had five singles on SUN Records: "Red Headed Woman" b/ "We Wanna Boogie", "Thunderbird", "Ain't Got a Thing", "Buckets Got a Hole In It", and "Sadies Back In Town". They also had a hit in 1965 on Razorback Records with "The Short Squashed Texan". "Red Headed Woman and We Wanna Boogie" has been voted the wildest record ever recorded. Sonny and the Pacers played clubs, festivals, shows, and colleges. They were one of the pioneers of rock and roll and traveled with Johnny Cash, Roy Orbison, Jerry Lee Lewis, Carl Perkins, Elvis Presley, Danny and the Juniors, Conway Twitty, Patsy Cline, Ronnie Hawkins, Billy Lee Riley, Ace Cannon, Charlie Rich, Teddy Riedell, Narvel Felts, and many more. 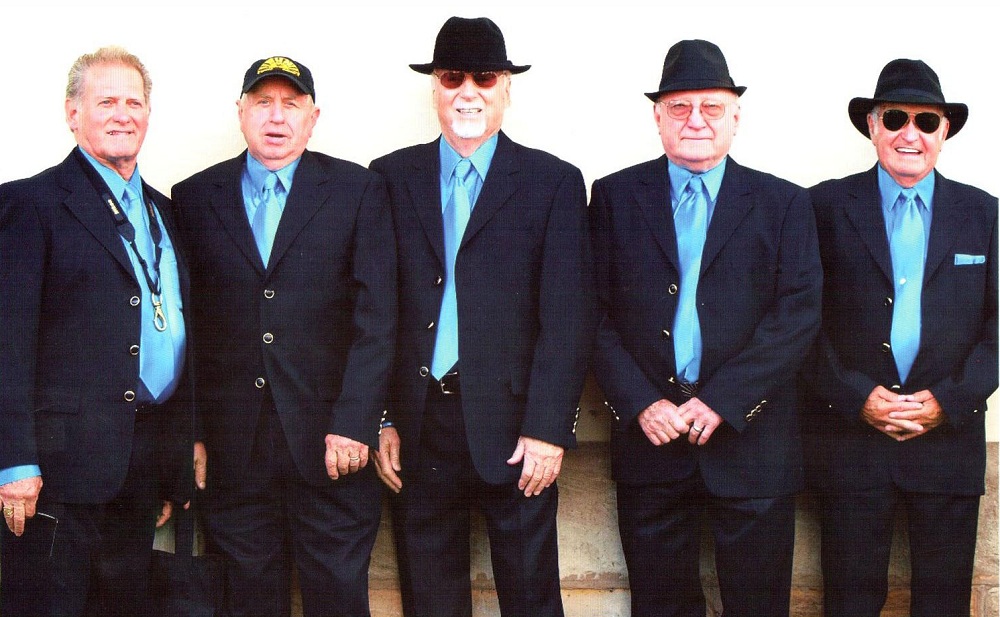 Several years ago the band reformed to record "They Came From the South" and now have another great CD out called "Still Rockin' and Rollin". The CD has received rave reviews and in June of 2000 was voted best new album in the country and roots field in Europe. Both CD's feature Sonny Burgess, Bobby Crafford, Jim Aldridge, Fred Douglas, Kern Kennedy, and J.C. Caughron. Charles Watson II plays fiddle with the band.

In April of 1999 the Pacers played for a world wide Rockabilly show in Las Vegas and stole the show. In May of 1999, Sonny Burgess was voted into the Rock and Roll Hall of Fame of Europe. In May of 2000 they played for the Rockabilly Hall of Fame in Jackson, TN along with Narvel Felts, Ace Cannon, The Crickets, The Comets, Brenda Lee, Stan Perkins, D.J. Fontana, Scotty Moore, W.S. Holland, and more. They were inducted into the Rockabilly Hall Of Fame In Jackson, TN in 2002.

The Rock and Soul Museum in Memphis also opened in May of 2000 and features a section on the Pacers. In October of 2000 played for a special show at the Peabody Hotel in Memphis honoring Sam Philips and his legacy at Sun Records. Sonny Burgess and The Pacers are 57th year in the music business.

What do you learn about yourself from the music, what does the Rock n’ Roll mean to you?

Bobby: When I first started in music in 1956, I did not have any ideal what was going on, but now I can look back and see that I was part of history and it means every thing now. 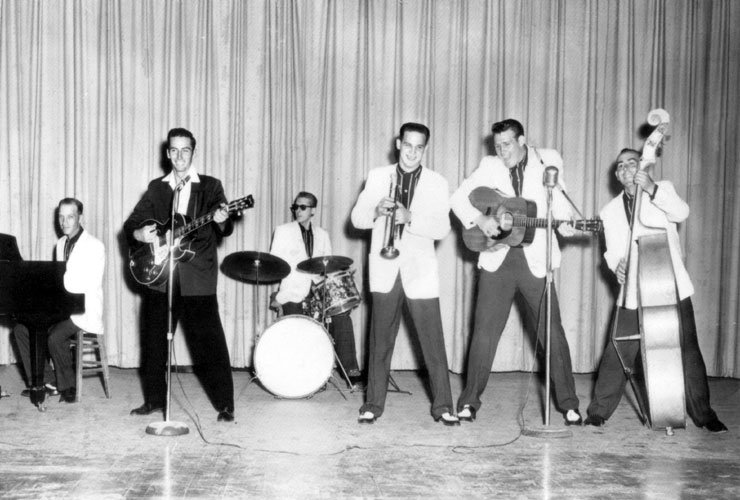 How do you describe Sonny Burgers and The Legendary Packers’ sound and what characterize your music philosophy?

Sonny: I mixed country, R and B, Big band, western Swing and out came We Wanna Boogie with the Red Headed Woman.

Bobby: Early in music I was fond of big band music, then I heard R and B, like Jimmy Reed and I did not care for country, but after touring with cash and others, I changed my mind.

Sonny: Whole my career was about the same, their always highs and lows in any thing and you just have row with the flow.

Bobby: Touring with Cash, Orbison, meeting Elvis and recording at Sun, playing with Jerry Lee Lewis, worse was when we stopped touring with them.

What is the “feel” you miss nowadays from the ‘50s?

Sonny: People dancing and having a good time and partying all night

Bobby: It will never happen again, the clubs, Sun studio and the parties

Sonny: 50's had to be the best time, the past few years has been great also, it only happen once

Bobby: The most interesting period in my life has been the last 10 years that we have toured all over the world doing what we love to do and make people happy 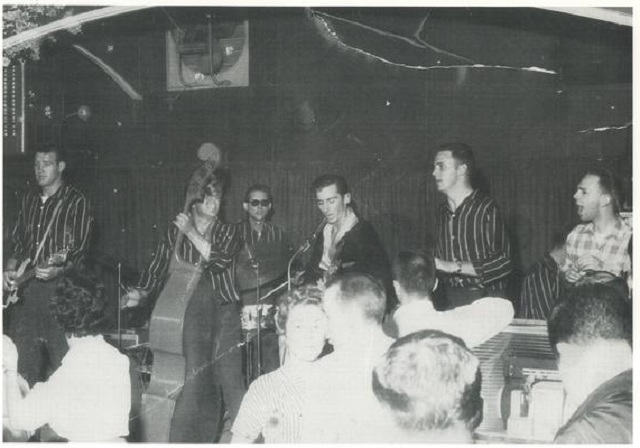 Sonny: Has changed some, but not to much, people still love it

Bobby: Music has changed a lot, from 45's to CD's, I do not like a lot of the music of today, but it’s great that our music lives on.

Sonny: Get your own style and work hard, play any where for any amount of money to get going, in Nashville some of the big stars today, worked in bars washing dishes to get by.

Bobby: Be yourself, work hard, get to know every one that can help you, it is who you know in the business

Why did you think that Sonny Burgess and Rock n’ Roll continues to generate such a devoted following?

Sonny: Because we work hard to please the fans, what we play we do it good and they love it

Why did you think that Sun Records and Rock n’ Roll continues to generate such a devoted following?

Bobby: Sun and Rock and Roll continue because it started some thing new and people that know good music keep it alive and Sam Phillips. 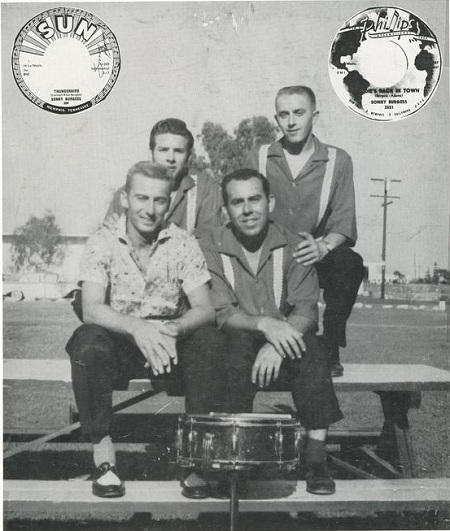 Sonny: When we recorded Thunder Bird and Itchie at Sun and Riley, Rich played on the session and we drank thunder bird wine. We thought we had a big hit and so did Sam.

Bobby: Touring with all the stars, at the time we did not know how big the music was and recording at Sun and all the stars would drop in and sing and play on our songs with us, like Orbison sing back ground on Find my baby for me. Charlie Rich played on itchie and thunder bird. Also Riley played on the session with Rich.

Do you know why the Rock n’ Roll is connected to the Southern culture & what characterize the philosophy of Rock n’ Roll?

Sonny: Rock and Roll connected to the south, because the south had all the young great musicians doing blues, big band country and just looking for some thing to bust out with.

Bobby: At the time in the 50's the south had a lot of young musicians and they mixed all styles and out came Rock and Roll

In your opinion what was the reasons that made the 50s to be the center of the music revolution?

Sonny: People like Sam Phillips with great ideals and the young musicians, to do what he ask

Bobby: The Kids were looking for something different and they found it in our music and it made them want to party and dance

Sonny: Shows we did with Marty Robbins, Ray Price, Maddox Bros and Rose in the 50's, Bruce Springsteen in the 80's, in the late 50's with Cash, Jerry Lee Lewis, and many more in a benefit for Perkins Brother when he was killed in a car wreck.

Bobby: Playing behind Orbison, Lewis, and the past ten years shows in Europe that were great and at one time never through I would get to do so and we are still doing it. Also we played in Washington, DC a few years ago at the library of congress. Some music styles can be fads but the Rock n’ Roll is always with us. Why do think that is?

Sonny: Rock and roll is always with us because it makes you feel good, dance and drink and be your self

Bobby: Again people have to have some thing that makes them feel good and for get their troubles and our music does just that. At shows now they thank us for playing the music and letting them remember the good times.

Sonny: Looking into their Eyes and seeing that they are having a great time and enjoying what you are doing

Bobby: I see happy people and it makes me feel young again, my wife said that when we are on stage we act like we are in our 20's.

Sonny: In my free time I like to go to the Movies, also still like to look at the woman

Bobby: I fish some, do some refereeing of American football, which was a love of mine before music, go to Casinos with my wife, but most of all it is still touring with the guys and making the people happy with good ole time Rock and Roll 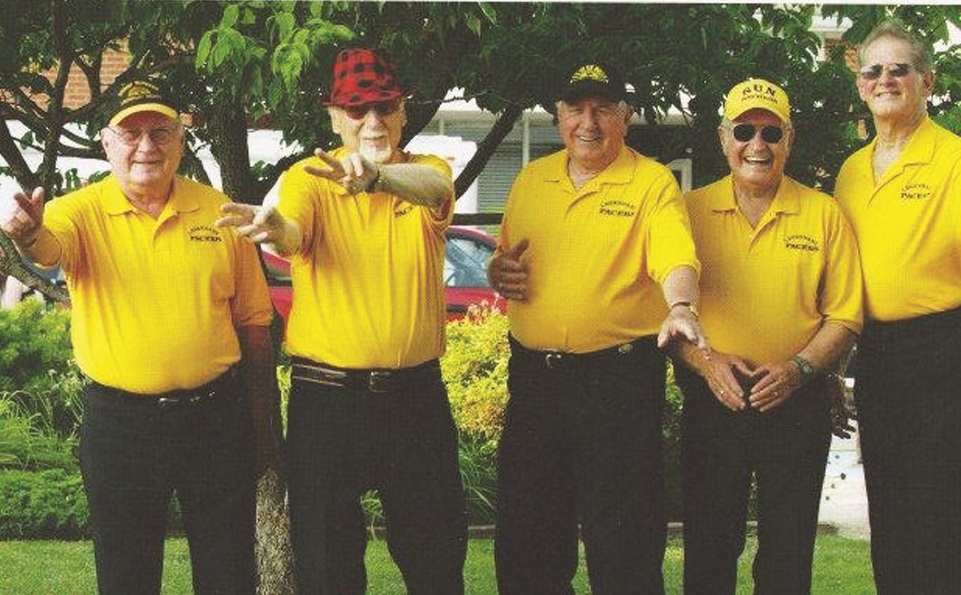