"Music certainly broke down cultural barriers, and the color of your skin didn’t matter when you moved your feet to a Ray Charles tune."

Music Through The Camera Lens 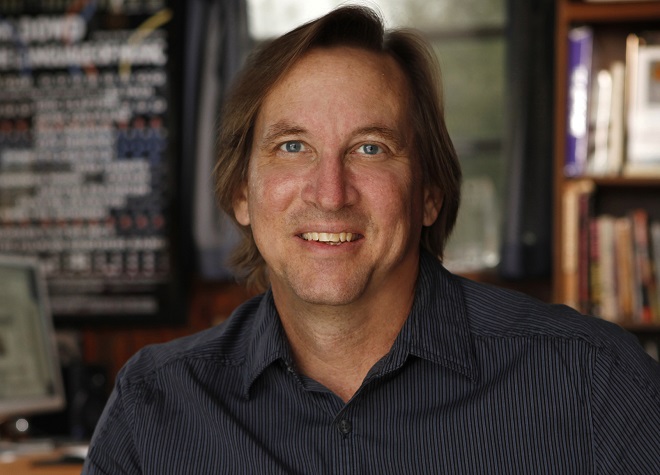 His recent work includes cinematography for the Showtime documentary series THE YEARS OF LIVING DANGEROUSLY, commercial shoots for ESPN and Sandals Resorts in St. Lucia and Grenada, and verité-style cinematography on STRICTLY BALLET for Condé Nast Entertainment's Teen Vogue. Mark directed and produced the feature-length documentary THE RECORD MAN, which premiered in March 2015. THE RECORD MAN is a uniquely American story of how a group of musical underdogs with raw talent and diverse backgrounds, led by the indefatigable determination of one man, Henry Stone, exported the music of Miami to the world. His funky eight-track studio and chart topping family of artists including KC and the Sunshine Band, led to the original Miami Sound and birth of Disco.

What do you learn about yourself from the world of art and music?

Music has the ability to connect listeners with their emotions, one reason it can be so personal and meaningful. The fact that someone else (a songwriter) can capture the hopes, dreams, fears and joy in our own lives, has an undeniable magical quality.

Music is often the inspiration for my work. I’ve been drawn to the back story behind the music I’ve enjoyed throughout my life. That’s what set me down the path of making music documentary films.

How do you describe and what characterize Mark Moormann’s philosophy and progress?

I make films about people who have earned the right to have their story told. People who’ve accomplished something special in their lives, but have not gotten the recognition they deserve. That is the consistent thread throughout my filmmaking career. 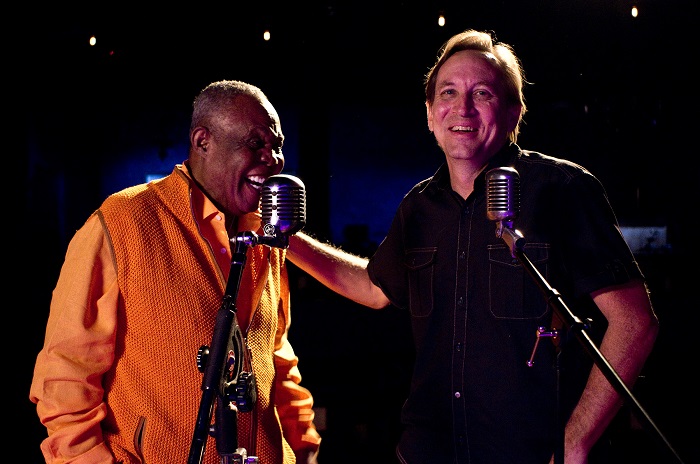 "Music has the ability to connect listeners with their emotions, one reason it can be so personal and meaningful. The fact that someone else (a songwriter) can capture the hopes, dreams, fears and joy in our own lives, has an undeniable magical quality." (Photo: Sam Moore & Mark Moormann)

What were the reasons that you started the artistic researches and experiments of image and music?

I came up in the film business working in the camera department on movies and commercials. I’ve made my living as a cinematographer who makes films on the side. These projects, most of them documentaries, have been a creative outlet for me. I’m careful what subjects I choose, as one spends a lot of time with the characters and story, and it has to be someone and something that keeps you engaged throughout a long and difficult process making a film. I find music stories to be infinitely fascinating subject matter.

I had the honor of sitting next to the legendary documentary filmmaker Albert Maysles on a Sundance panel featuring several distinguished music documentarians. After all the other panel members introduced themselves to the audience, it was my turn to speak. I had always been more than a little nervous in front of crowds, especially being in this very elite company, but I managed to introduce myself and speak about my film. Upon finishing, I looked beside me to see Albert staring at me with a sly grin. He picked up his microphone, like it was a weapon, and told the audience, "He's going to be okay, because he's got respect for his subjects, unlike . . . ," before going on to excoriate a modern-day documentarian for a one-sided, unbalanced approach to making documentaries. The lesson learned? If someone hands you a microphone (or a camera), don't you dare be nervous or timid. You chose this career for a reason: To tell stories, to say what you've got to say, to tell the world a story that needs to be heard. 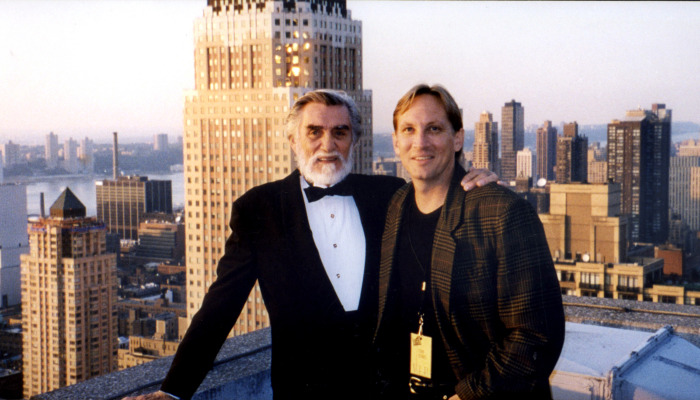 "Music is often the inspiration for my work. I’ve been drawn to the back story behind the music I’ve enjoyed throughout my life. That’s what set me down the path of making music documentary films." (Tom Dowd and Director/Producer Mark Moormann, NYC 2000 -- Photo by Dean Gudmundson)

Are there any memories with Tom Dowd, Henry Stone, and Ahmet Ertegun which you’d like to share with us?

The reward of making films, is that I’ve had the opportunity to meet and interact with legendary music makers. Interviewing Ahmet Ertegun in his Atlantic Records office; capturing Tom Dowd as he isolated the Layla guitar tracks of Duane Allman and Eric Clapton; hanging with old school record man Henry Stone in the Miami neighborhood that gave birth to disco; capturing Les Paul fire up and demonstrate the original multi-track recorder in his living room; shooting Amy Winehouse’s premiere U.S. performance at SXSW. It’s been an honor and a privilege to be allowed into this world.

What has made you laugh and what touched (emotionally) you from Stevie Ray Vaughan?

I was a young camera assistant working on an album project at Criteria Recording Studios in Miami, when I watched Stevie Ray Vaughan lay down solo guitar tracks. Stevie was in the studio, his favorite Stratocaster strapped on, listening to playback through headphones. I was part of a 35-mm camera crew documenting the making-of the album. I’d never been in a recording studio during a session, and now here we were rolling cameras on SRV. The studio was dead silent until Stevie hit the first note, loud and wailing. The sonic attack was earth shattering. I was standing a few feet away from him as he ripped through his runs, manhandling the guitar with his huge, powerful hands. Watching, hearing, and literally feeling every note as the amps shook the room, was an extraordinary feeling that made a life-long lasting impression. Then, after the session, we got to hang out with him during dinner with the music and film crews. Stevie was eating a raw green pepper like it was an apple, and later showed us how he used Super Glue to mend cuts on his fingers. That was a priceless experience, and one of several I’ve had at Criteria Studios, including shooting album sessions with the likes of Aerosmith and Michael Jackson. 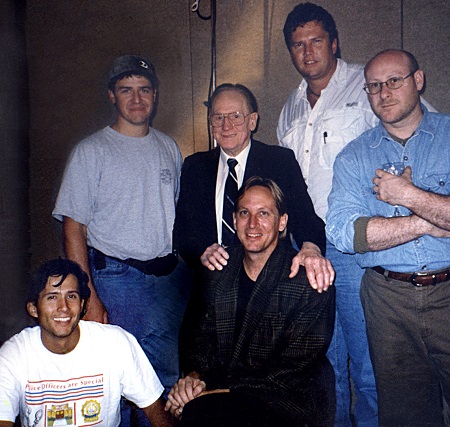 Styles, tastes, sounds and images evolve. While I’m a big fan of music of the past, I’m more interested in seeking out new sounds and artists. The music business has certainly changed a lot, and there are new economic realities in the digital world that not particularly conducive for songwriters, but there are still lots of talented people who create music, that’s what they do, that’s what drives them. That’s not going to change.  (Photo: Tom Dowd & the Language Of Music crew with Les Paul)

What is the impact of music and Rock n’ Roll culture to the racial and socio-cultural implications?

That story played well in Tom Dowd & the Language Of Music, as described by Jerry Wexler, who changed the term ‘race records’ to ‘rhythm and blues.’ Music certainly broke down cultural barriers, and the color of your skin didn’t matter when you moved your feet to a Ray Charles tune. I will say that Rock ‘n Roll, at its best, is dangerous. The parents of the 1950’s were right. There was reason to be concerned, as it did alter their society, but often in unforeseen positive, more inclusive ways.

Let’s take a trip with a time machine, where would you really wanna go and what memorabilia (books, records, films) would you put in?

I’d like to go to the Monterey Pop Festival in 1967, maybe operate a camera as part of DA Pennebaker’s film crew, maybe just settle in good seats and watch the show, Jimi, Janis, Ravi, Otis, Cass, The Who, Simon & Garfunkel, and lots of still-hopeful San Francisco hippies, it doesn’t get any better than that.