Eric Bell of Thin Lizzy talks about Van Morrison, Bo Diddley, Noel Redding, Phil Lynott and his own way to the Blues

"Music gives me strength, belief, humor, all these emotions."

Eric Bell: The music is sacred

As a founding member of Thin Lizzy, Eric Robin Bell really needs no introduction. After early work with showbands including The Bluebeats, The Earth Dwellers and The Dreams, the veteran guitarist struck gold when he teamed up with Eric Wrixon, Brian Downey and Phil Lynott. Taking their name from a Dandy comic strip, Thin Lizzy was born and the rest is a history that continues to be written as the legendary band retain a huge influence over music and popular culture. 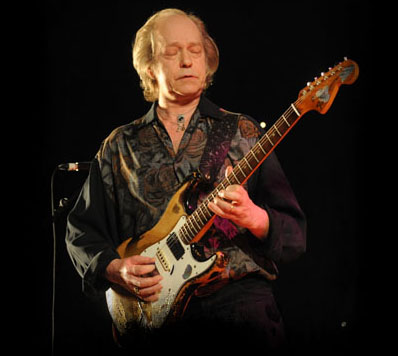 After Bell’s final official appearance with the band in 1973, the guitarist headed for pastures new, briefly forming his own Eric Bell Band before Noel Redding came calling, recruiting Bell for his own outfit. Whilst musically prolific, it proved a short-lived alliance and The Noel Redding Band split in ’76, leaving Bell free to pursue other avenues, most famously a stint in saxophonist Dick Heckstall-Smith’s Mainsqueeze. Still very much rocking his six-string and keeping a storied career alive, Bell was on hand to perform at the unveiling of the Philip Lynott statue in 2005. That same year he took to the stage alongside the late, great Gary Moore for a rendition of ‘Whisky In The Jar’ at the Point Theatre for the Phil Lynott tribute show The Boy Is Back In Town.

Eric, when was your first desire to become involved in the music & what made you fall in love with the blues music?
When I was around 14 years old, I bought a cheap acoustic guitar, and started trying to teach myself  to play copying from records, like Lonnie Donegan and The Shadows...then the blues boom started and reached Belfast and all the local bands started playing the blues.

What does the BLUES mean to you & what do you learn about yourself from music?
It took me quite a while to get the feel to play blues...it sounds very simple to play, but to really play it, it seems to take a lifetime. The thing I learnt about myself is we are all different, and you have to reach the point where you believe what you play is valid...you know ...this is ME

How do you to describe your philosophy about the music?
The music is sacred…it's like very important...when I listen to some music it just takes over my being...it gives me strength, belief, humor, all these emotions.

What do you think is the main characteristic of you personality that made you a musician?
One of the main things was, when I got my first job after leaving school (I worked in a garage) I found it nearly impossible to work in  the 9 to 5 world. I had lots and lots of day jobs and just couldn't cope with it. So, I wanted to make my living as a musician. 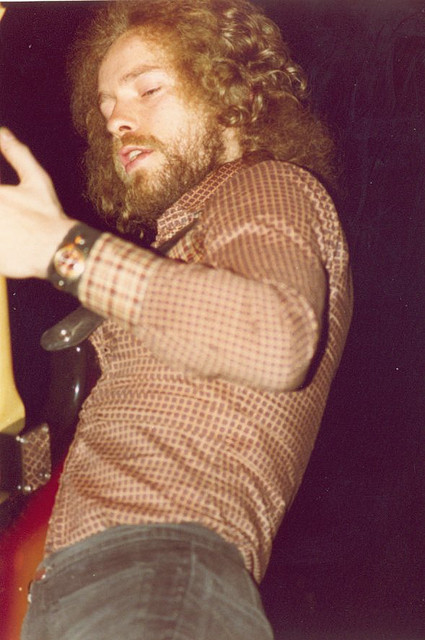 Where did you pick up your guitar style & in which songs can someone hear the best of your work?
I've been playing now for a long time, and I listened to all types of music, and tried to play things that had meaning to me, I'm still practicing and still trying....Well, you can hear my work on Thin Lizzy's first 3 albums, and  I have 3 cds out...”Live Tonite”,  “Irish Boy” and “Lonely nights in London”.

Are there any memories from Eric Clapton which you’d like to share with us? What kind of a guy was the young Eric?
The only time I was near Clapton was when I was touring the States with Noel Redding. We played some club in L.A. For 5 nights playing support to Freddie King...on the last night Clapton turned up, and started jamming with Noel on bass, Freddie on guitar, Buddy Miles on Drums, and a few other guys. Eric was out of his head and after trying to play2 songs, just put his guitar down and started going up the stairs at the back of the stage to the changing room, As he walked past me, I said “Can I borrow your guitar, Eric?   I wanted to jam...He just Laughed at me and said “No way, man no fucking way”.... The young Eric must have practiced every hour of the day every day to play the way he played on the Bluesbreakers Beano album.

I wonder if you could tell me a few things about your experience with Van Morrison
Van was a very intense guy; he had a great belief in what he did and came across as a very hip man...a bit like a serious jazz musician...I only played with him for about 3 months, and the way he was on stage really changed me...he would just try anything, change the songs, experiment and not really care what people expected him to do. Tell me about the beginning of Thin Lizzy. How did you choose the name and where did it start?
I left The Dreams Showband I was playing with 6 nights a week, and went around Dublin looking for a drummer and bass player to form a group...4 weeks later I was about to give up as nobody was interested, I went to the Countdown Club, and happened to meet Philip and Brian, we started talking and they said they would form a group with me.. I chose the name from a cartoon called Tin Lizzie and because Dublin people say tree and tick instead of three and thick I put an H in to make Thin then changed Lizzie to Lizzy… We started in Dublin City.

Do you remember anything funny or interesting from the recording hours with Thin Lizzy?
Our very first time in recording studios was in Dublin and we recorded a song called “The Farmer” we carried the P.A. Speakers into the studio to sing through, and some guy said you don't need them. We were so green we didn't know..   Also, the first album Thin Lizzy was recorded in Decca studios in London...we were all so stoned I don't really remember recording it.

Would you mind telling me your most vivid memory & what is the “think” you miss most from Philip Lynott?
When I knew Philip, he was a very gentle guy, good company, and very much into music...We got a house and lived together just to work on the music...I miss those days.

Which memory from Philip makes you smile?
Just those certain moments, when we'd be out together...he was a funny guy sometimes. 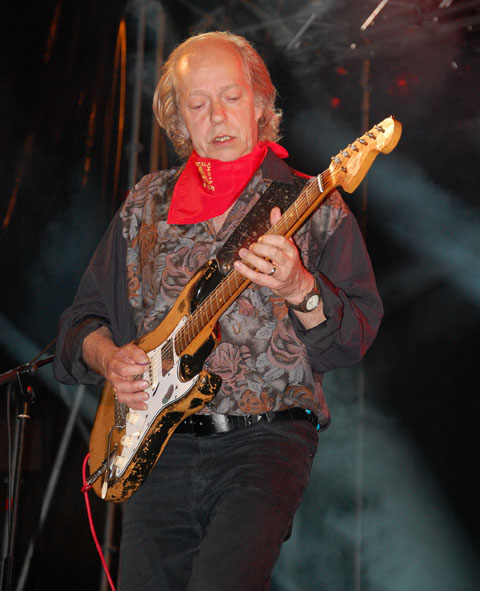 What’s the best jam you ever played in? What are some of the most memorable gigs you've had?
The best jam would have been the early days with Thin Lizzy. Again, some of the gigs with Lizzy, Mainsqueeze,and the Eric Bell Band.

Why did he think that Eric Bell continued to generate such a devoted following?
I think over the past 2 years or so, because of Lizzy's 3 cd's I was on were released again, some people have probably just heard me for the first time, or had forgotten about me. Also, there are quite a few videos showing me playing “live” on You Tube, which people can watch, and form their own idea. of what I try and do.

Are there any memories from studio and gigs with all GREAT MUSICIANS, which you’d like to share with us?
Some of the gigs I played with Mainsqueeze...esp playing Ronnie Scotts Club where we recorded a “live” album.

Which of historical blues personalities would you like to meet? From whom have you have learned the most secrets about blues music?
I would have liked to meet Hubert Sumlin, John Lee Hooker, Howlin' Wolf, and Otis Rush.
There is so many I learned from, but the one who interested me a lot was Howlin' Wolf. His music is like Voodoo music, and I love the cross rhythms he uses. 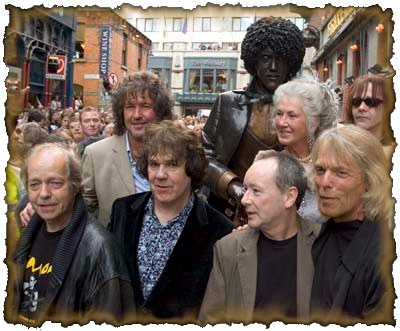 Some music styles can be fads but the blues is always with us.  Why do think that is? Give one wish for the BLUES
I think because the blues sounds real, there is a certain feeling comes from it. I think it will always be around.

How did you first meet Noel Redding, how do you describe him?
After I left Lizzy I moved to Dublin, and a few months later Noel phoned me and asked me to come down to Cork for a jam. We drove to his house way out in the country, and I met the rest of his band. And we formed a band... Noel was very hard work when I first met him, but after a while we became close friends. Noel was a very funny guy and great company.

What advice would you give to aspiring musicians thinking of pursuing a career in the craft?
I would say practice as much as you can, and be prepared for some down time...you have to be very strong sometimes to take the disappointments until the good times come along. 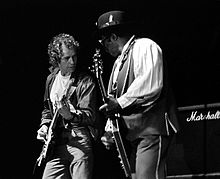 Would you mind telling me your most vivid memory of Bo Diddley? What advice has given to you?
Bo was such a nice man, one of the boys, and a great sense of humor. He was very young at heart and really seemed to love Life. The only advice he gave me was one day at a sound check, I asked him how I could be a better singer...he just said “there's nothing wrong with your voice you just sing.

Tell me about the beginning with Mainsqueeze & Dick Heckstal Smith. How did you get together and where did it start?
I was living in London at the time and got a phone call from Mainsqueeze's management, telling me who was in the band, so, I went along to an audition and got the job. Dick was a lovely man, and a bit of a joker. the very first time I went to a cafe with all the band, Dick walked out without paying his bill, and I ended up paying it...then the rest of the band told me he always tries to do this.

Is there any similarity between the blues rock today and the blues rock of the sixties?
I think the 60's blues rock was more pure, as there were less effects around then, and it all sounded new and fresh. 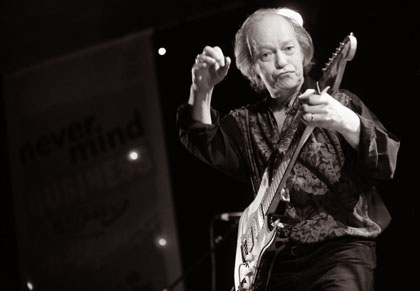 What is the “think” you miss most of the ‘60s?
I miss the freshness of the 60's as everything was coming about for the first time…the clothes, the clubs, the music...it all seemed new and exciting.

How has the blues business changed over the years since you first started in music?
I think it's become more like rock music sometimes...much louder, and everyone trying to become famous and rich. 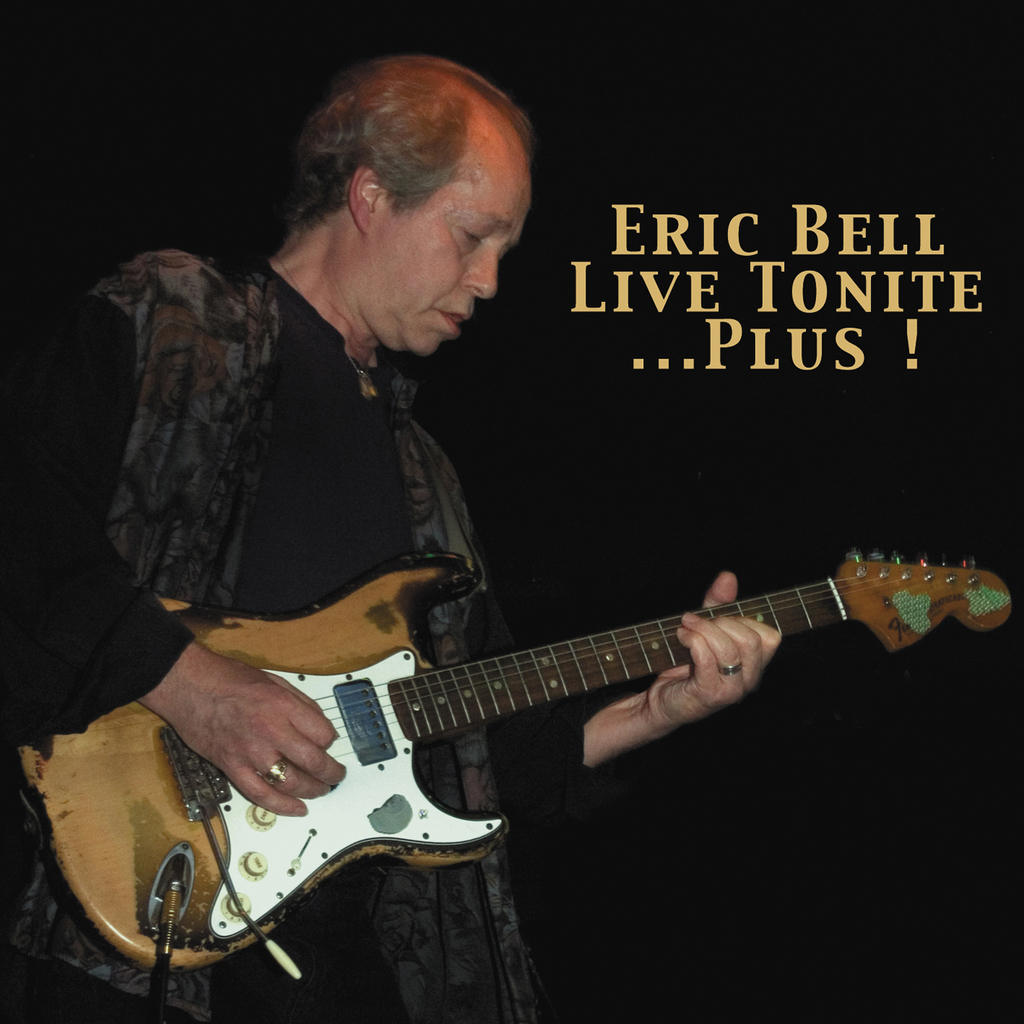