"The blues has always had a lot to do with feeling, emotion and improvisation, and I hear something very similar in sitar, sarod, and drum music from India and Africa."

King Paris: The Blues of Maharaja

Who before has ever fused the influences of Ravi Shankar’s sitar with Johnny Cash, Martin Denny’s Island romance with Nat King Cole, Ustad Ali Khan’s Indian sarod with Screaming Jay Hawkins, or Olatunji’s African drums with the Rolling Stones? What musician has ever forged his craft listening to as diverse artists as Alvino Rey, George Harrison, Elmore James, Mohan Bhatt, Les Paul, and Muddy Waters? 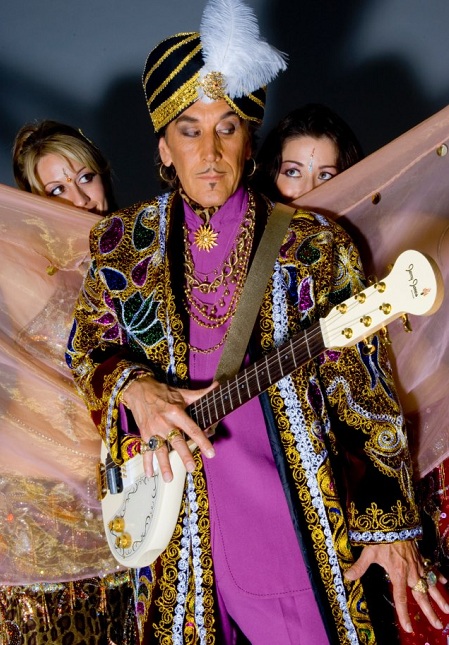 King Paris combines musical elements of American Rock and Roll, World Beat, Exotica, Bhangra, House, and Slide Blues Guitar into a uniquely Universal and original style that is all his own, and dazzles with the newest, boldest, most exciting concert show to emerge from the imagination in centuries. His “west-meets-east” entourage also includes exotic Bollywood and Belly dancers backed by the pulsating rhythms of his astonishing, internationally-flavored band, “The Hip-notics.”

Drawing from his experiences as a youth traveling the globe with his father, an import-export dealer, King absorbed all the sights and sounds of far-away places. These impressions gradually found their way into the music and spectacle that is now presented here. King is also well known to music lovers around the world as Grammy nominated guitarist, Rick Vito. A recipient of the W.C. Handy Music Award, whose music and songs have appeared in many television and motion picture soundtracks, he has also enriched the recordings and performances of Fleetwood Mac, Bob Seger, John Mayall, Little Richard, and countless other classic rock and pop artists with his inimitable style. But now a new magical music journey is about to begin. Here is the amazing KING PARIS!

How started the thought of King Paris? How did you choose the name and what characterize King Paris philosophy?

KP: I saw a band playing Klezmer music and different Eastern scales, a couple of which I memorized and later worked out on slide guitar. I also received a DVD of Indian slide player Mohan Bhatt, and inspired even more, I began writing tunes that I could take in more of an Eastern direction. The image and name of King Paris came after that and I began creating the look with the help of my wife. I was later invited to perform at a wedding, and there was able to try out King's music with a band and belly dancers. It was a big success, and so I decided then that I would continue on in this direction that would be apart from what I do as Rick Vito. It is living your creative life as two people, but at this stage, I love that. The philosophy is all about love, entertaining people, and the synthesis of musical styles.

How important was the Eastern music in your life? How does the Eastern culture affect your mood and inspiration? 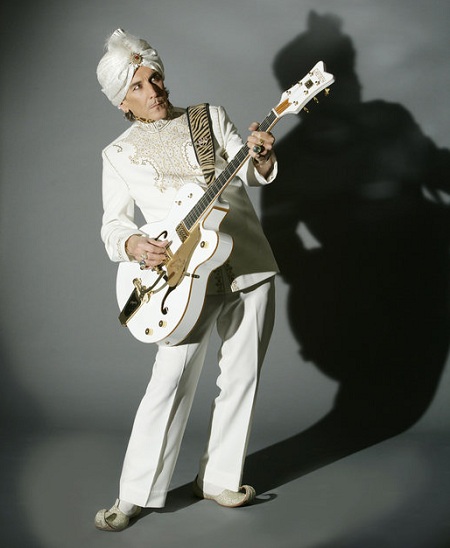 KP: It has always caught my ear, much in the same way as blues music does. To me it sounds exotic, foreign, sensuous, and even at times has a little danger to it. I feel a kind of kinship with the people I know and have met from India and other places. I would love to visit there someday and try to experience whatever it is that I find so attractive. I am a very patriotic American, and America has always been made up of many cultures that come together bringing new music, food, art, language into the tapestry. I want to be part of that in a unique way.

From the musical point of view what are the differences between Eastern and Western culture and music?

KP: There are untold differences, but I look for the similarities, because I did not grow up being influenced extensively by ethnic music and other cultures. American songs have always brought influences from all over the world into them to give the song a unique flavor. Think of Dean Martin singing "Volare" half in English and half in Italian. I am just continuing in that tradition. I have not really experienced living in another culture, so I can't really give too much of a perspective here.

What are the lines that connect the Blues with Ravi Shankar, Ustad Ali Khan and Olatunji's African drums?

KP: For me, blues has always had a lot to do with feeling, emotion and improvisation, and I hear something very similar in sitar, sarod, and drum music from India and Africa. The slide guitar allows you to simulate the sound of a voice and capture half and quarter tones that are played in India and other parts of the world, so that is similar to the blues played on slide guitar. It always comes back to the slide for me…this has been my passport to expression in all kinds of music. 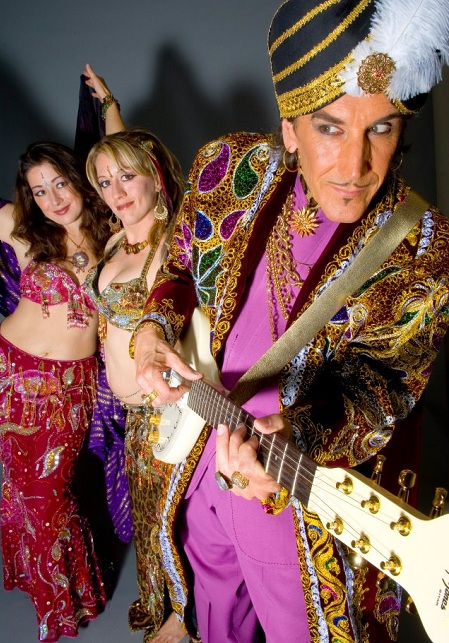 KP: It reaches people's souls, it's deep, expressive and powerful, and people from all cultures relate to that. With each new generation that becomes exposed to it, the blues music regenerates itself in a fresh way. As long as the original blues feeling is not lost and modernized too much, it will continue to inspire people everywhere.

Do you know why the sound of slide guitar is connected to the blues? What are the secrets of sitar-guitar?

KP: Again, it can sound like a human voice, and the human voice is capable of expressing joy, sorrow, love, anger, desperation, and virtually any emotion. The slide can do all that playing the blues in capable hands. I can give you a couple secrets of sitar-guitar. One is that the guitar must use light gauge strings and also be tuned down from "E" to "D" or even lower so that it can have a good sustaining "buzz." The bridge is a big part of the sound. Some are made of plastic, but the best ones are traditionally made of hardwood or bone. The bridge must be intonated perfectly or you will not get a good sound.

How would you describe your contact to people when you are on stage and King Paris show?

KP: King Paris is very much of a show, and not just a music concert. People love to be entertained, and when King and the beautiful dancers enter the stage, the energy that fills the room becomes electric, and the audience responds to that. I am not just playing the guitar and singing…it becomes an event, and a type of theatrical performance in a way. I try to engage the people in as many ways as I can think of.

Which memory from Rick Vito’s life makes you smile?

KP: Marrying my lovely wife, and the births of my son and daughter.

KP: When King Paris becomes the hottest show in the world, the painting depicting this magnificence will be on every billboard in every town that we play in. 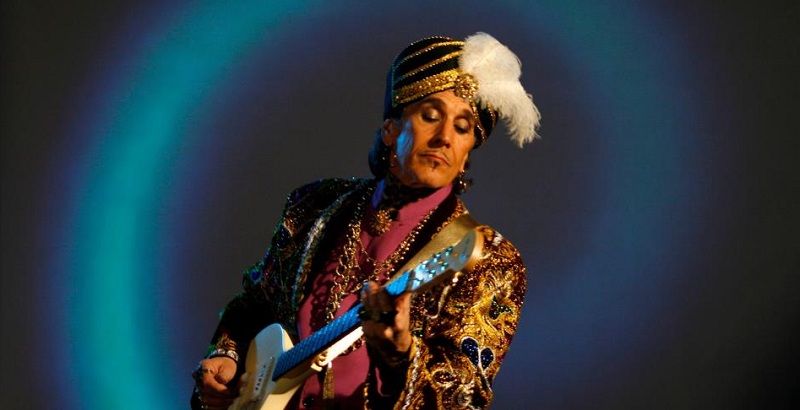 "I am a very patriotic American, and America has always been made up of many cultures that come together bringing new music, food, art, language into the tapestry. I want to be part of that in a unique way."

KP: I'd like to go back to the time of Jesus and spend the day talking with him. I would ask him questions all day long and learn firsthand what he really meant on every subject he ever talked about, and everything I've ever wondered about. Then I would play slide guitar for him.

How you would spend a day with Elmore James and Ravi Shankar?

KP: Well, if all three of us were together we could all cook some of our favorite foods. I would cook pasta, Ravi would cook Indian food, and Elmore would cook soul food, Then we would all sit down and eat together and talk about our lives and how we felt about different things. After that we would play some songs and join in on each other's music.

KP: I worked with him on a couple of occasions, so I was fortunate to be in the presence of such a real "character." I would just tell him how special he was, and that I loved his persona and all the theatricality he brought to rock and roll. I also met George, but was young and too intimidated to stay long in his presence. I would ask him if he ever thought of combining slide guitar and sitar. He might have. In any case, I think he may have whispered the suggestion to me in a dream from the spirit world, because I have had good luck bringing these two instruments together. So, I have to thank both of those guys for some incredible inspiration!