"The Blues is simple; true and deals with real emotions like love, pain, loosing your house; losing your job things that people have to face everyday."

Pascal Delmas is a hard working French drummer. After a few years taking drum lessons in the Agostini Drum School (Toulouse) directed by Daniel DUMOULIN; he decided to take off to London at the age of 22 (1992). While staying there 5 years working with OTIS GRAND and the Big Blues Band, he had the opportunity to record and tour with ROBERT WARD, BIG LUCKY CARTER, JOHNNY MARS, and EARL GREEN. 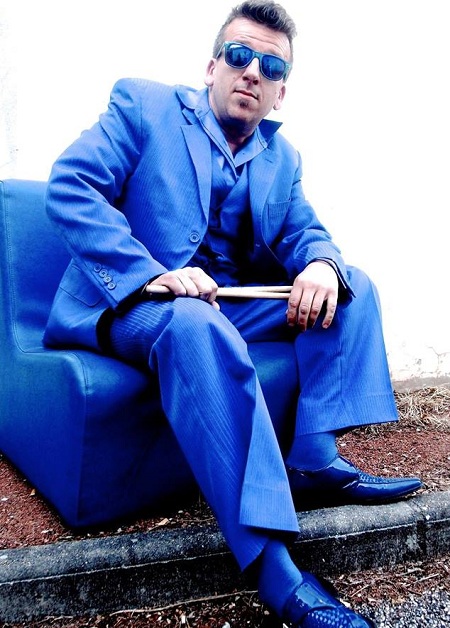 Back to France he started working with JEFF ZIMA and the Glory Hogs recording with the RAY BIG BAND (Millenium Swing) and keep on backing European and American Artists: NEAL BLACK; VAN WILKS; STEVE Big MAN CLAYTON; NICO WAYNE TOUSSAINT; PHILIPPE LEJEUNE; CHRISTIAN CHARLES DE PLICQUE; LYNWOOD SLIM; MISTER TCHANG; RJ MISCHO; BIG GEORGE BROCK; MANISH BOYS; RON HACKER; MITCH WOODS; DOUG JAY; JOHN LIEBMAN; FELIX REYES; RACKY THOMAS; MISSISSIPPI HEAT; EDDIE C. CAMPBELL; STEVE GUYGER; GENE TAYLOR; DAVE HERRERO; KEITH DUNN; SEAN CARNEY; OMAR COLEMAN; SHAR BABY; LITTLE G WEEVIL; MICKEY Jr.; CASHBOX KINGS; JIMMY ADLER; ARTHUR ADAMS; EDDIE TAYLOR Jr. and many many others. Pascal is also member of The French Blues Explosion. The band is bursting at the seams with the things France is famous for love, spirit and tradition. Mister Tchang, Fred Jouglas and Pascal Delmas all come together to create this unique group that is truly keeping the spirit of traditional blues alive, but is still forward looking. When you listen to songs like "I Think" from the album of 2013, feat the low down Harmonica parts from Nico Wayne Toussaint they take you down to the deep humid swamps of the deep dirty south. "Hey Little Honey" takes you right down into a dirty, old, smokey road house somewhere between Austin and Port Arthur, TX. The closing song "Once and For All" speaks to the true spirit and tradition of a down home slow blues. T-Bone himself is probably up in heaven smiling down on these boys right now.

Well, I guess the Blues made me what I am today, and allowed me to meet great people; share with them; laugh with them and give a little love to the world.

Living the life I love that’s what the blues means to me!

How do you describe Pascal Delmas sound and progress, what characterize your music philosophy? 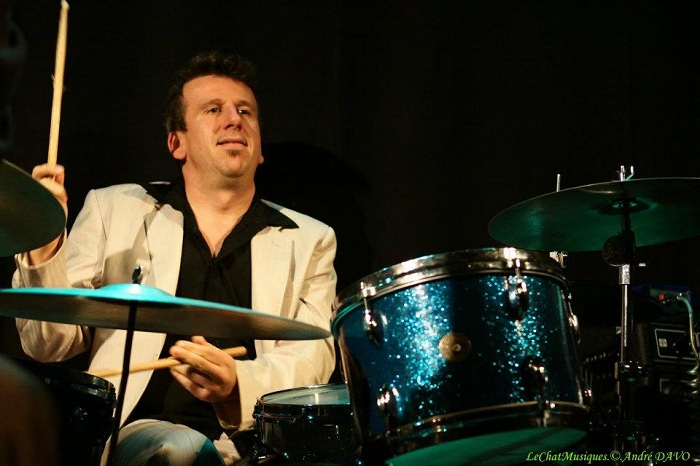 "Lots of great French Bands today really respectful of the Blues tradition and an unbelievable  new generation of musician’s in their 20’s coming up which is a really good thing for the Blues."

NOW!! Got lots of Touring coming up and I’m involved in management with Fred Jouglas from L’Etroit Tours Production and developing my trio The French Blues Explosion, working on a new Blues Record Label; lots of work but very exiting projects .

Hard to tell; Best would be getting a call from Otis Grand when I was 23 years old asking me to come and leave in London to join his Band; doing a tour with the late great Robert Ward or with one of my all times favorite Chicago Blues Artist: Mr. EDDIE C. Campbell!

Worst was doing a tour with a guy from New York that had no respect for musicians or promoters or anybody he would meet … Names in MP!!

Because it’s simple; true and deals with real emotions like love, pain, loosing your house; losing your job things that people have to face everyday.

Probably jamming with Duke Robillard in Marco Fiume Blues Fest (IT) cause I spent hours listening to the early recordings with Roomfull of Blues and when I heard his voice in the monitors it just killed me! "I guess the Blues made me what I am today, and allowed me to meet great people; share with them; laugh with them and give a little love to the world. Living the life I love that’s what the blues means to me!"

Opening for Salomon Burke in Beyrouth with Otis Grand stage was on the Beach, Thousands of people and huge screens on the side! Thought I was Phil Collins. Doing a gig with Robert Ward, just meeting the guy 5' minutes before and doing his songs like if we were his regular band, was just magical; playing with Eddie C. Campbell was just another unbelievable chance, I still hear his unique sound, opening a tour with Arthur Adams in front of 1500 people was quite exiting too, backing up Grana Louise from Chicago with my band the French Blues Explosion is so cool, any gig where people are listening to each over and going in the same direction is magic to me.

One Summer I was playing in Rovaniemi Finland close to the Arctic Circle; 24 /24 h sunshine. The Sax player had the great idea to take a walk by the river with a Beautiful Finish girl he just met; they ended up in a wooden hut to do their thing… One thing he forgot is that mosquito’s in that part of Finland are were bigger than your head; the poor guy couldn’t seat for a week, taking the plane back to England was a nightmare for him…

Meeting Jean Paul Lopez at the age of 17 a guy with an incredible Blues culture that knew how to share his love for the music and how to give the virus to a young idiot that was more into the Ramones than Muddy Waters; this guy was a tour manager for a tour production agency called Rhésus Blues and was working with people like Johnny Heartsman, Joe Louis Walker and Otis Grand. Changed my whole life! 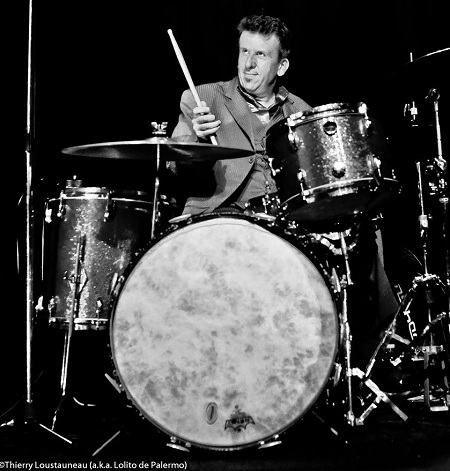 Be Patient; Time will Tell!!

"I would take a trip to Chicago in the late 50’s; see Little Walter on Stage with the Aces; what a Dream!"

This incredible sound they had!

The fact that everything was new; can you imagine listening to “off the wall” from Little Walter for the first time in the 50’s; what a shock !! The swing they put in everything they were doing!

The fact that everybody would go out and party, no computers; Wi-Fi or TV; if you wanted to have fun, you HAD to go out !

Well, I hope people will keep supporting live music, and go out to SEE live Bands cause lots of music venues are having a hard time surviving .

I would ask the Media to Broadcast Real Music and not only this crap the industry puts in peoples mind to make millions.

I was shocked when Eddie C. Campbell had his stroke few months ago and I’m very concerned about Lynwood Slim’s Health.

Lots of great French Bands today really respectful of the Blues tradition and an unbelievable  new generation of musician’s in their 20’s coming up which is a really good thing for the Blues.

What are the lines that connect the legacy of Blues from US to Frances? 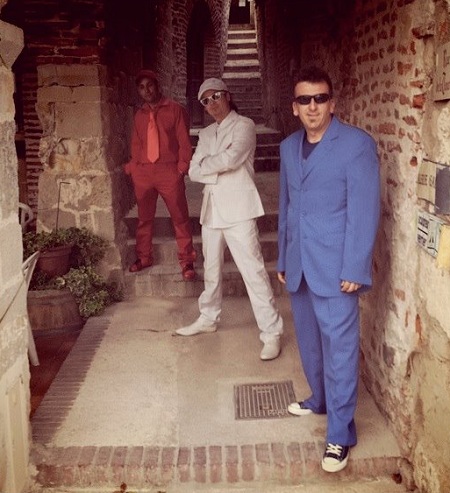 Well lots of American Artists move to France in the past like Memphis Slim or Luther Allison cause they thought that European were more concerned about art forms and the Blues in particular which is probably still true  today.

As Early as the 70’s people like Jacques Morgantini (Black and Blue Label) were travelling to Chicago to record Eddie Clearwater or Jimmy Dawkins in the Clubs; People like Gerard Herzaft started working on his encyclopedia of the Blues that became a standard and just received a Blues Award; Jacque Perrin started Soul Bag magazine; all this people were true passionate people that did a lot to promote the Blues when nobody really cared!

What's been your experience touring with American musicians what are the difference from the Europeans?

Well first of all, backing an artist is different than playing in a band, you have to try to play the way the artist wants you to play even if you’re not crazy about it; that’s the deal. Most of the time you have no rehearsal or so little time to do it so you have to do your homework.

On an over side I think American artists are more concerned on the sound and groove you have than on the style.

It’s got to be efficient; QUICK!!

I would take a trip to Chicago in the late 50’s; see Little Walter on Stage with the Aces; what a Dream!

Probably would love to be in New Orleans when Earl Palmer started playing with Little Richard the early Rock’n Roll!