"For me I don't believe today's music will stand the test of time. I feel most of today's music is Plastic, it's lacking the heart and soul from eras past."

Joe Konas is truly a gifted British guitarist. He shared the stage with premier guitarist and musicians: Alvin Lee, Ritchie Blackmore, and countless others and also jammed with Jimi Hendrix at Royal Albert Concert (2nd show Feb 24, 69). Joe Konas moved to Ontario in 1970, where he opened a few music schools, teaches guitar and got into real estate. Joseph Stanley Konas, former member of the late '60s British band THE GODS, has written a book about his adventures in the '60s in England. The book titled "Hey Joe", 180 pages, will contain a ton of never-before seen black & white photos of Joe with The Gods, and various other musical legends that he hung with and/or jammed with at some time back then. 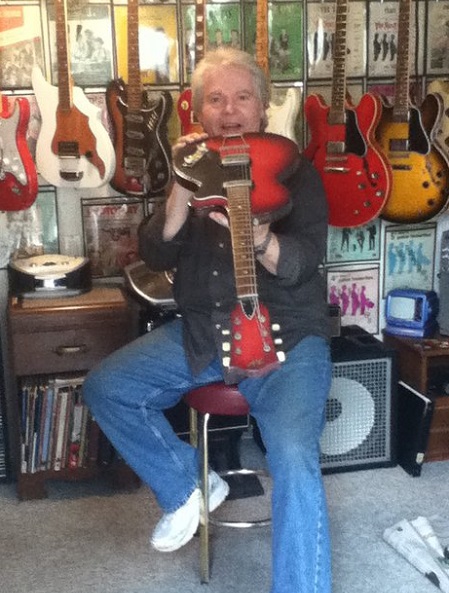 The Gods were an English group founded in 1965. The original band members included Greg Lake, later of King Crimson fame, Mick Taylor, Brian Glascock, and his brother John (later with Jethro Tull), future Uriah Heep members, keyboardist Ken Hensley and Lee Kerslake on drums, and Joe Konas. Taylor, Glascock and Glascock were schoolmates from Hatfield and had been playing together as The Juniors (or The Strangers), a band they formed in 1962. Also part of this band were Malcolm Collins and Alan Shacklock. In 1965, the line-up changed. Mick Taylor continued to play guitar and teamed up with Hensley. They also added Konas (guitar/vocals) and changed their name to "The Gods". In 1966, The Gods opened for Cream at the Starlite Ballroom in Wembley, London. Joe was also member of Toe Fat, an English rock music band, active from June 1969 to 1971. Formed in June 1969, the band was fronted by former Rebel Rouser Cliff Bennett and, in the course of its two year, two album career, featured lead guitarist and keyboardist Ken Hensley; bassist John Glascock - who replaced original bassist John Konas; and drummer Lee Kerslake. After the first album, Kerslake and Hensley were replaced by Brian Glascock (drums) and Alan Kendall (guitar) respectively. The name was decided over dinner when Bennett and his manager attempted to create the most disgusting band name possible. Toe Fat was signed to the record label, Rare Earth, in the US. In the UK, the band signed with EMI, who released their first album on the Parlophone label, and the second on Regal Zonophone.

I learned that rock n roll was in my blood, and I felt that was what I wanted to do for a living. I lived my dreams for a few years with my first professional band The Gods. And we were similar to Vanilla Fudge, Loud; Heavy and with great vocal harmonies. We were never a psychedelic Band. We were certainly ahead of our time. And now we are referred to by our fans as a cult band. And it's nice to know that all four members are still alive and well and performing individuality. During this time I was still going out to see wonderful guitar players all over London. I learnt a lot of different styles and techniques, by listening to Eric Clapton, Peter Green, Albert King etc.

How do you describe Joe Konas sound and progress? What characterize your music philosophy?

Each guitar tone and riff should fit the style of song. But for me, I have fiddled around for many years. Even today, tone is so important to have. Like Jimi; SRV; Robin Trower; and Gilmore. Smooth with sustain and some bite. That is my preference. "It would be nice to bring back the Master Jimi, to show how music could still be written, sang and played with heart and soul. Along with Jim Morrison, Janis Joplin, Kurt Cobain and Amy Winehouse." (PHOTO: Joe Konas jammin' with Jimi Hendrix, Royal Albert Hall, London 1969)

What were the reasons that made the UK in the 60s to be the center of Psychedelic Rock Blues researches?

It's amazing that from this small Island England so many fabulous Bands and musicians came out in the 60's/70's and even up to now, after all these years there's so many great artist coming from England. I can't think of any other country that has produced more talented musicians and artist than England.

The only meetings I recall that are important to me was signing a 4 year contract with EMI Abby Road, and signing a contract with Harvey Block Associates our management team. The best advice given to me was get a day gig and play part time.

What I recall of my favorite memories are; My very first Band with my mate Frank Fletcher we were call Tony Ventures and the D.C.'s... playing all over England and Europe. Writing and recording songs. Crossing paths with a lot of wonderful musicians, having the privilege of meeting Jimi Hendrix several times and playing with him. "Each guitar tone and riff should fit the style of song. But for me, I have fiddled around for many years. Even today, tone is so important to have. Like Jimi; SRV; Robin Trower; and Gilmore. Smooth with sustain and some bite. That is my preference." (PHOTO: Joe & Wild Child Butler)

It would be nice to bring back the Master Jimi, to show how music could still be written, sang and played with heart and soul. Along with Jim Morrison, Janis Joplin, Kurt Cobain and Amy Winehouse.

What are the lines that connect the legacy of Blues with Progressive and Psychedelic Rock?

Allman Brothers, The Marshall Tucker Band, The Los Lonely Boys and the Lynyrd Skynyrd Band, these bands to me are rock blues bands. But it all started from BB King, Albert King, Freddie King and Elvin Bishop they are the Blues legends.

What has made you laugh from Wild Child Butler and what touched (emotionally) you from Jimi Hendrix?

Wild Child Butler was very serious with his blues when he played he was serious about his music and he was a great leader of his band...Compared to Jimi Hendrix when I met him several times in London. He was always a gentleman, and very happy and bubbly.

My time machine would take me back to Windsor UK by Slough where I lived. Where I used to play the Windsor Jazz and Blues festival with probably 12 bands for the whole concert day. Such as the Spencer Davis Band; Small Faces; The Cream; The Who and the Yard Birds etc… 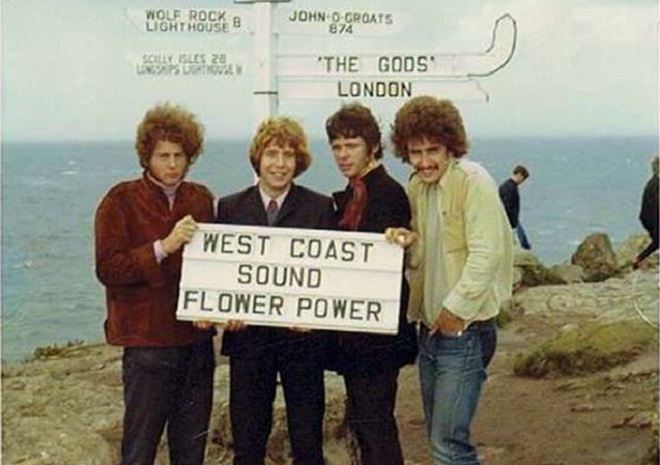 "I learned that rock n roll was in my blood, and I felt that was what I wanted to do for a living. I lived my dreams for a few years with my first professional band The Gods." PHOTO: The Gods (c. 1967) Paul Newton, Lee Kerslake, Joe Konas & Ken Hensley (Courtesy of Paul Newton)