"All the music pieces are pleasant for every person and has been written for some reason."

The Lost Boys' band was formed on 2005 in Thessaloniki, Greece, by Chris Tsif. Guitarist, singer and songwriter of the band’s Chris took the band name by his favorite movie The Lost Boys (1987). The sound of the band is varied while their strong influence from rock and blues artists as Roy Buchanan, Rory Gallagher, Taste, Led Zeppelin... is prominent within the sound of the band, psychedelic and acoustic Drop D Slide Guitar Tunings mix with Chris 52' Telecaster Tone, comes along to create an interesting blend in the rhythm and melody of their songs. They have been gigging and shared the stage with many bands (Prassein Aloga, SARISSA,...) around the country for a few years with the same energy like back in the old days and their fans are gradually growing more and more... 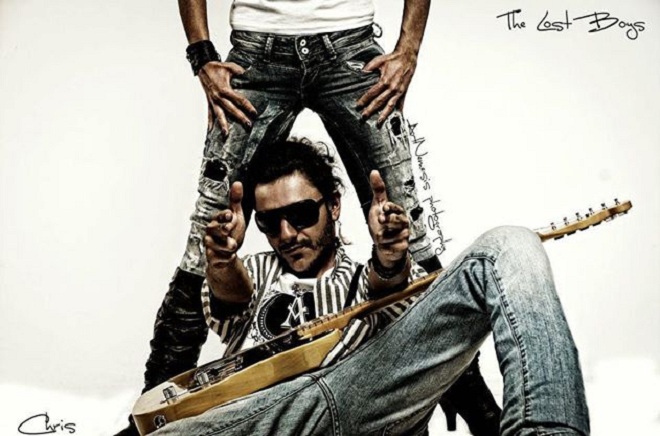 The lineup first formed from guys that were actually from the same village, being close friends since they were kids. They have released first single at the middle of the year 2013 own production and studio recording the name of it Barfly. Includes: Vintage Harmonica and acoustic slide guitar in drop D Tuning. The band are: Chris Tsif on vocals & guitars, Anestis Poirazis on guitar & saxophone, Johnny on harmonica, Dimos on drums & percussion and Antonis on bass.

The first time I touched a guitar was when I was at fourth or fifth grade, when my parents bought me for a Christmas gift a classic Bravo guitar! I was watching my friends and classmates taking music lessons in music schools and I felt the need to learn to play like them too but unfortunately my family couldn't afford it! So I started scratching the guitar's strings until I was in junior high. Then, I took part in my school's choir! Everytime they were looking for a guitarist I wanted to participate so badly but I was scared because I didn't know the notes and many chords. After that, some of my friends showed me some basic things on the guitar in order to manage to understand and read the guitar tabs! (I’m thankful for that) Then I felt the Blues...when I tried to learn by myself and I realized that I could compose a whole song without knowing too many things. I was just expressing my thoughts by scratching! hahaha Since then I scratch every day! The blues mean to me soul - love - pain - expressing joy or injustice! Be real!!!!

What characterize the philosophy and sound of The Lost Boys?

The philosophy of the band is rock. We have such a great time while we play, we forget all the problems, we compose, we learn more things about each other, we argue sometimes but then we reconcile, we drink, we make tours, we jam with other musicians, stuff like these. The band's sound is special as we mix many music genres but always remain in blues' roots. Trademark of our band is the harmonica, the Telecaster with guitar's Dr. D tuning and also with the vintage sound of slide, the dynamic rock drums with the drummer's traditional style, with the intense bass playing, the passion, the energy and the voice full of feelings. 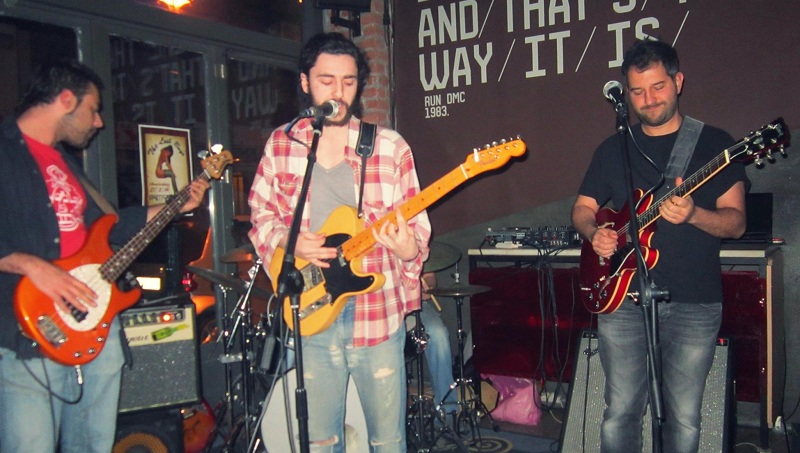 "Blues Rock, was, is and it will be forever timeless because it is a feeling, it's joy, its grievance and it's a personal opinion! It is in the human nature!"

What are the most memorable jams and gigs you've had? Are there any memories which you’d like to share?

The Lost Boys' live in Polytechnic University of Thessalonikis, Greece 2011. We got there and it was like hell. So many people! The polytechnic university was full of people from eight pm to six in the morning!! In this festival the 99% of the bands that took part was playing punk and they came from Bulgaria, FYROM and Greece. I still have no idea how we got there! hahahah So…it's the third night and it's our turn to perform on stage. In front of the stage's stairs there is a bunch of hardcore punk rockers!! As we were looking at each other with a smile on our face, we said ''Let's do this and whatever!'' I remember us playing ZZ Top - Blue Jean Blues and everyone was speechless! They couldn't understand what was going on but they liked it! Some of them understood it was a ZZ Top song and they encouraged us! I knew i had to do something to attract their attention and to show them that the blues have energy on stage too. (We shall not forget Hendrix). When we had to play our last song, ''Barfly'' (our song of our first cd single), I replaced the Telecaster, which i had just bought, with my old one, my thirteen years old Les Paul and I put Zippo lighter fluid on it and i set the guitar on fire!! I still remember the surprise on their faces!!!

Memory makes up smile! Listen!! The Boys live are from Thessaloniki and in this live show, when we finished and we were ready to take the long way for our city, Dr Johnny (The harmonica player) refused to follow us and he stayed at the bar and continued drinking! (So classic for Johnny as he doesn't like to get in a car and leave after a great gig!) When we got in our studio in Thessaloniki, we called him to make sure he was ok (knowing that he had money only to pay his bus to return) hahaha! So he said to us that he was relaxing in a hotel! The next morning, he woke up in another city and took the bus to come back home after having a great staying in a hotel for free!!! (There are some other stories about sleeping all night on a sunbed on the beach and stuff like that but in the next interview!) 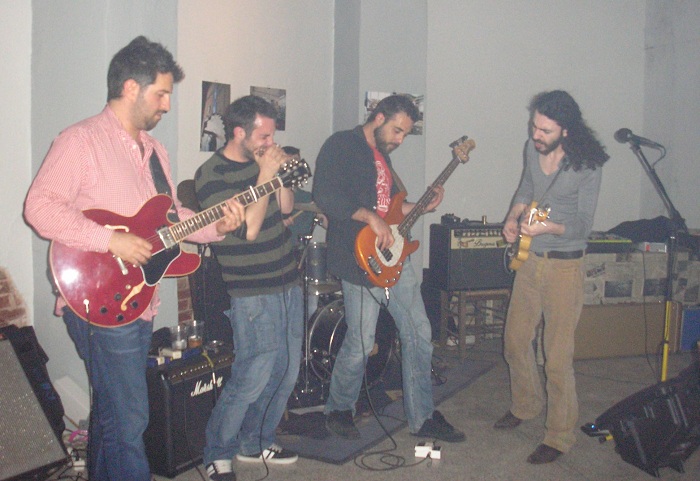 "The philosophy of the band is rock. We have such a great time while we play, we forget all the problems, we compose, we learn more things about each other, we argue sometimes but then we reconcile, we drink, we make tours, we jam with other musicians, stuff like these."

Because of Rory Gallagher!! And because of the fact, that the blues have a lot in common with our traditional “Rempetika” songs.

What mistakes in local blues scene would you wish to correct? What are your hopes and fears for the future?

In my opinion, the biggest mistake that happens is that there's no help and no cooperation between the musicians and this is something that has to change in addition to give blues the chance to grow and take a step further in Greece! I think that this situation has to do with the older ones and the musicians that are many years in music industry! We should give chances to the younger people, we should have support bands, we should organize more music festivals and be more informed if we want to create a warm atmosphere between the musicians and the audience that is watching our performances.

Nothing! All the music pieces are pleasant for every person and has been written for some reason. 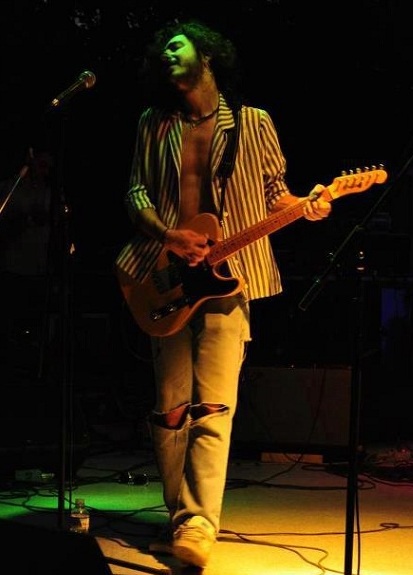 We haven't had the honor to perform in the USA yet because it's such a long trip for someone to make and we would need a big budget or a very strong proposal! (But we certainly want to fly to the USA and especially to manage to perform in this country, where these unique sounds were born and have been loved so much) We believe that things in countries outside of Greece (especially USA, UK and Germany) are easier as there is a big audience which supports Blues Rock music because so many people grew up with those sounds and they remind them their childhood (it's like our traditional music, rempetika) Also, the audience and the stage-bars in abroad don't make any exceptions between the ''famous'' and the ''unknown'' musicians! (But in Greece this happens a lot) They love and listen to whatever they like and whatever touches their soul! (We are lucky cause we live in a generation in which there is internet to make our lives easier!)

What has made you laugh lately and what touched (emotionally) you from local blues scene?

We were looking for Blues/Rock support bands for some time to open our live show in Athens! So, after a long search, we finally found out that there are still people who want to play the blues and support not only the band but the whole Blues/Rock stage in Greece! (Thank you guys, The Bluesbirds, Route 66 Blues Band) My advice: Give chances to everybody! Some people start it, even if it is a support or a jam

Blues Rock, was, is and it will be forever timeless because it is a feeling, it's joy, its grievance and it's a personal opinion! It is in the human nature! As long as there are humans on Earth, this music will continue to be reproduced by us because it's coming from inside our soul and we will never stop suffering or being happy or fight for our rights! (The only difference is that a musician can write it on a paper or he can quickly record it on his cell phone in order not to forget it! If he has a phone!! ) 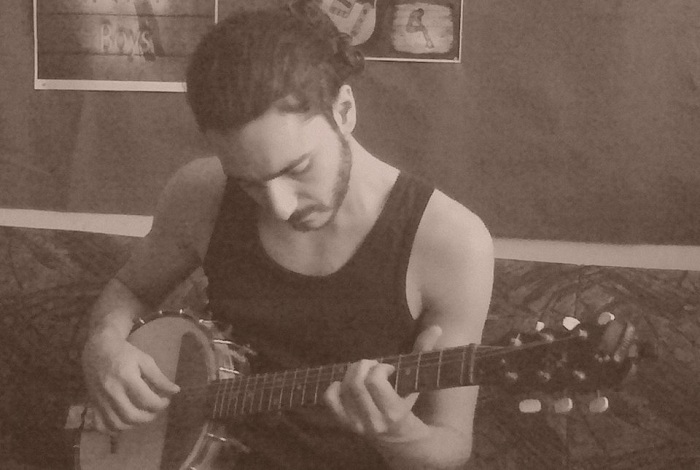 "Blues is the roots, Rock n' Roll is his children and Psychedelic Rock is his grandkids who took LSD! Country is American folk music that was created by the farmers of USA and it has many characteristics similar to Blues!"

What do you miss most nowadays from the old days of blues rock?

The analog sound which was so warm in our ears, the mistakes we could listen sometimes from the musicians in their official albums, the soul they had back then, the live recordings in the studio with one microphone on the ceiling, their instruments and their music equipment, the vinyl, the slightest music effects and the partnership, the jamming between all of these real artists!

What are the lines that connect the legacy of Blues with Country and continue to Psychedelic and Rock n’ Roll?

Blues is the roots, Rock n' Roll is his children and Psychedelic Rock is his grandkids who took LSD! Country is American folk music that was created by the farmers of USA and it has many characteristics similar to Blues! As the years were passing, there have been many mixes and changes in music! But I think we have still a lot of things to see and listen in the future!

Woodstock Festival of 1969 and smoke a cigarette listening Canned Heat and Alvin Lee. 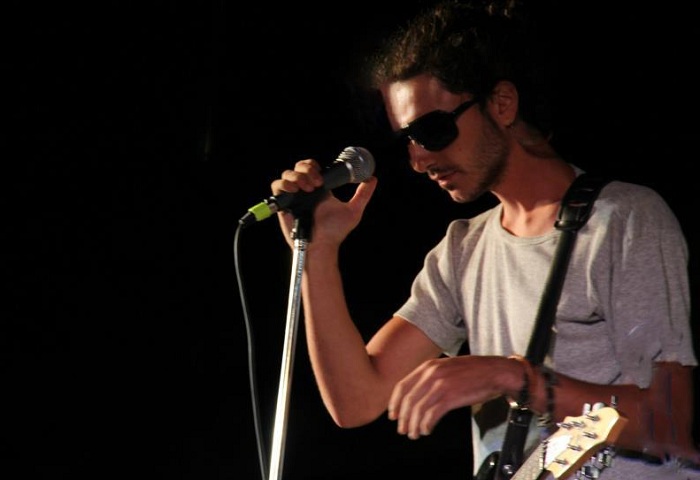