"Playing music and especially the blues, I have the feeling that, some things like honesty and expression, grown even better inside me. My personal opinion is that...you can't play the blues without been honest to yourself and to the others."
The Boogie Sinners: Time To Roll
The BOOGIE SINNERS are an Greek rhythm n' rockin blues band, based in Athens, they were part of the new rising local blues scene. Inspired by artists such as Junior Wells, Koko Taylor, Buddy Guy, Shemekia Copeland, Hank Ballard, the Sinners is one of the hottest blues band in town. Since 2009, they have performed in the Athens most popular clubs and bars. Guitarist-singer Theodore Alexiou shared the stage with various musicians in Chicago, New Jersey and New York, like Rob Stone, Gerardo Velez (Jimi Hendrix's conga player), Arthur Neilson, Dean Shot and many others. The Boogie Sinners released their debut "Time To Roll" a unique energy, sound & style album, which takes you back in time! 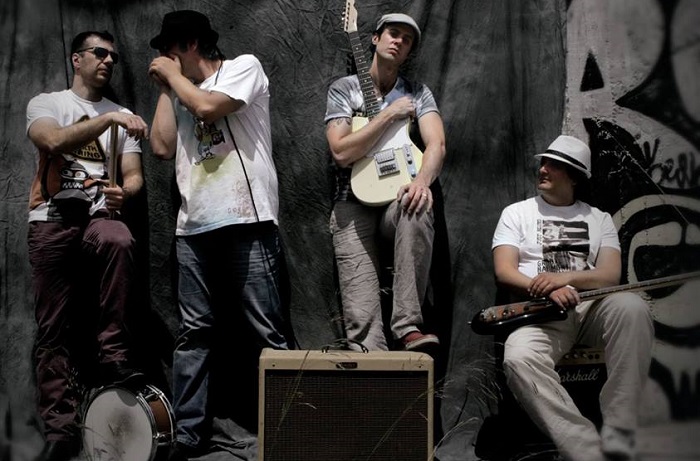 "All the Rhythm & blues styles combined together...from the 50's till today's progression. We don't really like putting signs on music, but if I have to do that, I believe that this is the one."
The Boogie Sinners are: Theodore Alexiou (Guitar, Vocals), Kostas Tenezos (Harmonica), Dimitris Georgopoulos (Bass) and Giannis Dimoulas (Drums), also the past members Lia Hide (Vocals) and Giannis Antonopoulos (Drums). Sinners play weekly gigs and participations at the best venues in Greece. The band and Theo inducted at the Blues Hall Of Fame (2013). Theodore talks about the band, Greek blues scene and his experiences in USA.

When was your first desire to become involved with the blues?

My first desire....about 6-7 years ago when I heard a Coco Montoya album! I know it's a little bit strange, but...well...I'm 26 years old...and I didn't live in the 60s or 70s or even 80s to have a B.B. King or an Albert Collins tune as a "first blues thing" in my ears. Then I discovered Albert Collins which was Montoya's "mentor", and after that, a whole long story which called "the blues". I became a maniac with this music and since then, after I discovered my favorite guitarists - Otis Rush, SRV, Albert King & Bernard Allison - I barely pick up my head of the guitar during the day.

Any memories from your experiences and jams in Chicago and NY that you would like to share with us?

Chicago was a great jamming experience for me...playing with really great players like Chicago's harp master Rob Stone, but the real deal for me was in New Jersey and New York city. First time I got there 3 years ago, I was really lucky for having some really great jams. The first 2 nights were at The Bitter End club with Gerardo Velez, Jimi Hendrix's conga player, Arthur Neilson, Shemekia Copeland's guitar player and of course, Dean Shot, one of the most finest guitars players in New Jersey and also Hubert Sumlin's guitar player for 5 years. After this first experimental and full of memories 20 days, the next 2 years that followed, I returned again and again at the States for a couple of months each time and played as a full time musician with a NJ topic band, The Group Therapy and a couple of other session musicians all around New York, New Jersey and Philadelphia. I've played in lots of clubs there...but the place I have in my heart is the Robin's Nest Rhythm & Blues club in Linden, NJ. I believe that this is a bright example of, a small but full of energy classic juke joint, where all the great musicians in town gather and play some really hot stuff in there! The 1st song in our album is a tribute rock n roll tune to this great place.

What meetings have been the most important experiences for you? Best advice ever given you?

All the ''meetings'' I had so far, taught me some useful things. As about the advice thing... the best one I've ever took by someone and I see that this is the most true thing ever, is...to play beautiful music and that's it. No signs and no negation to any form of music. And my advice to all the seekers of the real music is... Don't try to play someone else's blues. Play the blues of your soul. If it feels and sounds good to your soul and ears...then play it big time! Hearing the ''Time To Roll'' album...some people told me, ''Every song is different from the other'' and that's exactly what we wanted to do. For example, the blues of my soul, is the album's 4th song called, Dream Weaver. I has nothing to do with the typical blues form...but it's the most bluesy stuff for me and... from me.

Of course it is...everybody's got the blues! It's the most simple & the most complex feeling at the same time. Like Otis Rush used to sing about his "Double Troubles", the bills...taxis...nightmares...hard loving women...just like this way you can tell much more about...spiritual & cosmic things....and you're STILL SINGING THE BLUES!!! It's magnificent!!! I love it!

Pretty good, as I can see, and I hope to be much better through the years! I believe that there are many talented blues players in this country and I hope to meet all of them personally someday. As I told before, I love Bernard Allison, SRV & Otis Rush. I don't want to play exactly like Stevie or Bernard did, I mean.... even if I wanted to ....it's impossible to do that!! All I can do is, pick up some of this type of guitar lick...and some of that lick...and put it all together the way I like.

Playing music and especially the blues, I have the feeling that, some things like...honesty...and expression, grown even better inside me. My personal opinion is that...you can't play the blues without been honest to yourself and to the others. As about the expression I mentioned before, I express myself much better by the time I started to play the blues.

To be honest in many ways, and for some reason, the ability to appreciate some other things... more "simple" things in my life that I haven't even noticed before!

What would you give to Paul Butterfield & Muddy Waters?

I wish I knew those two guys and give them a big hug!!

Well... In my opinion, there is one thing that some people don't understand here...I'm not saying all of them...but there are some players who, despite the fact that they are playing the blues, a music which always was coming from humble persons and when they were playing, they did it  FOR the audience and not only for themselves! All I'm trying to say is...there are some people who, the first thing they wanted to do is to impress with their speed and guitar tricks and they don't know the word ''Jam"! This is what the blues is all about. The f&@#%n’ jam which comes from inside you. Jam with yourself, jam with your band, jam with the people! If you could change one thing in the local blues scene, and it could become reality, what would it be?

Greece got some really hot stuff to show in the Rhythm & Blues scene. Maybe a couple of radio stations which could play exclusively these kind of music and maybe some TV tributes would be more helpful in order to expand most people  musical horizons beyond the typical ones.

Let’s take a trip with a time machine: Where and why would you really want to go for a whole day?

Well...here's the thing with me. I believe that my favorite musicians have already done great work for me and they are still here every time I play. I never really felt the need to meet a favorite musician of mine in person or to be to a favorite concert I saw…cause I feel that I've already know them or I’ve already was there. So, if I had the chance of only one time trip...I would definitely choose to be at the right place and the right time in order to prevent some serious disaster.

Give one wish for the local scene...What your opinion about Blues.gr?

Blues.gr is a very nice and a well informed page! They are also some new and very promising pages (bluesway.gr) just as blues.gr is, and they are dedicated to this beautiful music.

Three words to describe your personal sound your progress

I thing that, the most important thing of our band is, that we're having a REALLY GREAT TIME when we're playing!!! I mean that! They are great persons each one personally... I'm very happy to know them! As about our sound...it's more like Texas blues...with harmonica...and female vocals and....you know...we're to trying to play the blues & rock 'n' roll as better as we can…what can I say? You'll have to listen on your own..! It's the best way. Love & respect to each other and having fun! What else do we need?

The Boogie Sinners shaped about 2, 5 year ago. I wanted to find some people with the same passion for this music like I have. And I think that I finally found them! And I'm saying "finally", because, as I mentioned before, there many people that they don't give a damn about the blues or generally about the music. Unfortunaly the band and me personally met a few of them but...it's ok! You always keep learnin' through this! The last "arrival" was the drummer Giannis Dimoulas, John Antonopoulos (past member) and the Harp player Kostas Tenezos are in the band from the very first time. We're talking about two crazy blues lovers to the bone!!! Dimitris Georgopoulos, our bass player, came later and change completely our rhythm 'n' section sound!! Great bass player and great a person! A past member in the band was Lia Hide at the vocals...and I can assure you that...this woman can really sing!!! After this, I think that, our sound and playing finally find their way! What can I say...I feel very lucky for knowing them and I really hope the band to stay like this and keep goin'.

How would you describe Boogie Sinners sound and songbook?

With one phrase? Rhythm & Rockin' Blues. All the Rhythm & blues styles combined together...from the 50's till today's progression. We don't really like putting signs on music, but if I have to do that, I believe that this is the one.

Well...my favorite song is a Ray Charles tune ''Sinners Prayer". I was thinking something like..."Sinner Players'' hahaha! I told it to John and he said «Hey..."sinners" it's OK!  Why don't we call it Boogie Sinners»? I liked the way it sounded very much! 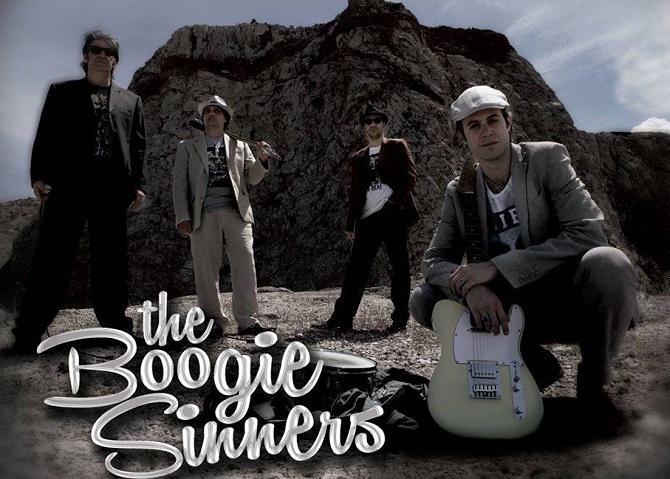