"Music in now days seems to have lost it’s purpose which is to offer a higher emotion than any other kind of art."

Panagiotis Haramis is a Greek musician and writer. He was born in 1972 in Athens, Greece. His first contact with music was at the age of 10. From 1990 to 1996 he took lessons on bass as well on piano with a well known guitarist Sakis Tamvakakis.  He started playing Bass with bands at the age of 14 until 1993 when he met Loukas Sideras (the drummer of APHRODITE'S CHILD) and joined the band called DIESEL.

At the same time in 1995 he joins DIDIMOS releasing two cd's ('96 and '97). From 1997 to 2000 he becomes a member of a big orchestra, performing ANDREW'S LLOYD WEBBER music (JESUS CHRIST SUPERSTAR, SONG & DANCE, SHOW TIME and JOSEPH AND THE AMAZING TECHNICOLOR DREAMCOAT). In 1998 he joins ZOOLIXO LIGO an art-rock Greek band releasing a CD in 1999. 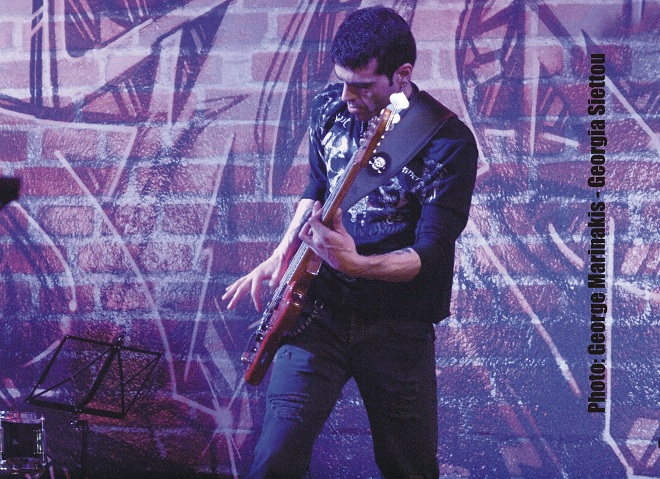 On July 2007 released his book with title "Introduction to Electric Bass" by Philippos Nakas Music House. The same year he joined the "TECHNICAL INFO" band and releasing in 2008 a CD titled: "DANGER" with Dave Weckl and Tom Kennedy as guests. In 2009 he performs in Pallas Theatre the musical ''LA CAGE AUX FOLLES''. In 2010 he performs on Pallas Theatre the musical ''MARINELLA - THE MUSICAL''. From 2007 he performs with NULL, releasing their first cd in 2009 called ''AXROMOS AIONAS''. In 2012 he starts his own project called "Bass Vs Vocal".

When was your first desire to become involved in the music and the bass?

The very first desire and fooling around with music came at the age of 10. But when it comes to Bass, my first contact was at the age of 14 with a pretty funny way. Imagine me at a music school wondering what instrument should I learn. Then the manager of the music school opens a hard case with a ’76 Fender Precision Bass in it, telling me that this is the instrument I should learn. I said ok, that simple. Years after I realized that at that time there was no student learning Bass so he needed a student to take Bass lessons.

I had plenty of great moments and I am sure more are coming, but worst? No, there are no bad moments when it comes to music. Music is the best thing that ever happened to me and I am feeling grateful for this. I believe in music, the line that connects all the styles is the humanity itself. Music is a global language, it’s an art that everyone can understand and feel."

The most important experience for me is by the time I had the opportunity to take lessons by a great guitar player, Sakis Tamvakakis. He is one of the few remaining legendary musicians in Europe. I like to call him ‘’music genius’’. Music it’s self is and should be smile, laughter, joy, fullfillness. If you have never felt those things you surely have turned the wrong way. I keep every single memory as a treasure.

I remember, I was 23 years old when I started playing with Lukas, who of course, was already know world wide by ‘’Afrodite’s Child’’ among with Vangelis Papathanasiou and Demis Roussos. I remember I was very nervous about being a member of a group that had three great musicians. Giannis Drolapas on guitar (most guitarists in Greece took lessons by him) and Sigma Fay on Vocals (a powerful blues, rock voice with one hell of stage appearance). I was too young at that time but these guys knew what they were doing and I learned from them so many things. Lukas is an outstanding musician and a killer on drums. They sure knew how to Rock and I am grateful that I met them.

I think it’s the energy and adrenaline that Rock music gives to people, whether you are a musician or just a listener. Reality, that’s what ‘’Zoolixo Ligo’’ stands for, but with a little bit of craziness. Strong Lyrics and powerful music with odd meters. As a philosophy we use ourselves to satirize reality and everyday things or persons.

I am leaving the others to answer that question. And that’s because when I am on stage I create my own small world. There is no room for anyone else it’s just music, my bass and me (these are the three secrets). There you are, I just answered.

Once, about 10 years ago I had an accident, I hurt my right leg. At that time I was at a studio recording the musical ‘’Victor Victoria’’. There was no way to stay at home and get some rest. So I had to go to the studio and put my leg over a chair so that the blood wouldn’t down to it and get swollen. I recorded for about 8 hours in that position.

Here in Greece we have a lot of good things going on, great musicians, with a lot of modern ideas. The problem is that most of the musicians are trying to ‘’copy’’ foreign musicians. We must believe more in ourselves and what are we capable of. Every musician has a unique personality and that’s exactly what we should do. Give the best of ourselves, the best of our soul. 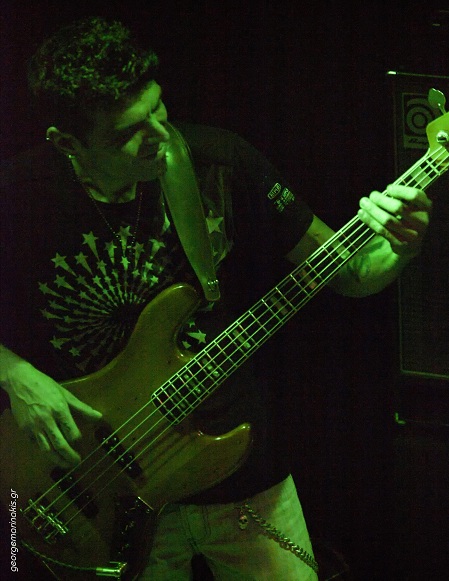 What I really miss is the originality in music. Musicians in our days (not everyone) had become more constructor like. We take a chord, a melody we put one more chord and that’s it. Music in now days seems to have lost it’s purpose which is to offer a higher emotion than any other kind of art. It can make you laugh or cry at the same time with no specific reason, just by hearing music. But there will always be those people that will put music back to where it belongs.

I believe in music, the line that connects all the styles is the humanity itself. Music is a global language, it’s an art that everyone can understand and feel. The same thing happens when it comes to musicians. It does not matter which style are you in, as long as you perform it by your soul. Music, from every style, must come from our soul and return there. Soul is the homeland of music.

If I had that opportunity I would surely try it out. I would really like to live somewhere back in time with clean air, no pollution, no war, with no things that humans created to harm the planet and each other. If someone knows a place in time like this please let me know. I am willing to go there.

You are also known for your books about the bass. Would you tell a little bit about that? What are the secrets of bass?

Publishing two books until now and a third that is coming soon, didn’t just happened. Especially my first book ‘’6,564 Bass Chords’’ is based on what my teacher Sakis Tamvakakis always tried to lead me to…playing chords on my bass and arranging melody’s with chords. So, after a lot of thinking years gone by and I started writing this book. The funny thing is that when I finished it I said ok now let’s count the chords and guess what? The number that came up was 6.666 chords. There was no way to publish a book with a title ‘’6,666 Bass Chords’’. I did the obvious…started deleting some of the chords.

As for the second book I believe that was the natural evolution for me. In general, I enjoy writing and on my third upcoming book I am trying to find some answers about music and musicians. This book has a literature flavor and has nothing to do with an educational book as the two previous.

No secrets of Bass, no secrets for music. You need two things to become a really good musician Patience and Insistence. 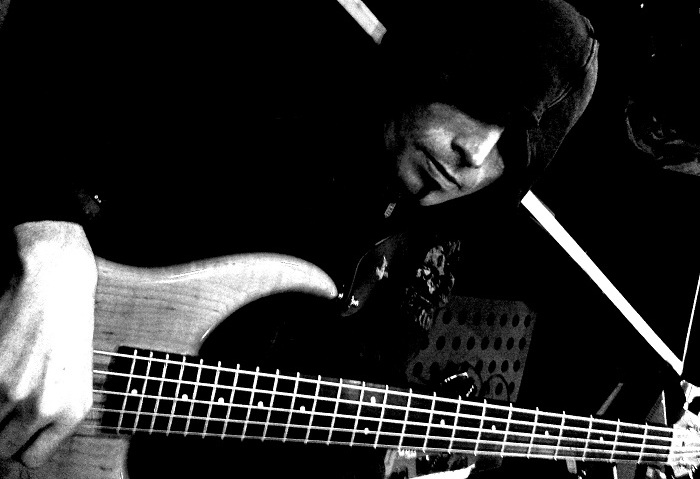 "Music it’s self is and should be smile, laughter, joy, fullfillness. If you have never felt those things you surely have turned the wrong way. I keep every single memory as a treasure."

Every single gig or jam for me is unique. I enjoy every single moment, every single second in music as long as I have good friends to play with.

What would you say to Andrew Lloyd Webber?

First time I was holding in my hand Webber’s musical ‘’Jesus Christ Superstar’’ sheet, I noticed that the bass lines where so good as if they have been where written by a bass player. It’s not so common to find musicians that can write so good for Bass as if they were bass players. That’s why Ι love his music.

Ask every single Bass Player in the planet about Jaco, you will get the same answer: ‘’Yes my influence was Jaco’’. If not so, he or she is a liar. Jaco is like Hendrix for Guitarists. Only one question for the great Mr. Jaco: ‘’why did you have to leave so soon”? 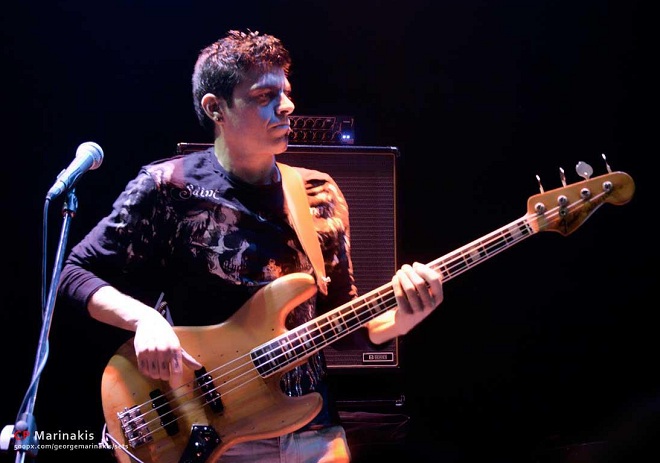