Greek singer Elena Falirea talks about the Blues, Rembetika and the legendary 'outlaw' artists of Pre-War

"The Rembetiko is in a sense a multicultural creation. It belongs to the same period of time with the Blues. Its origin of inspiration is the same. If you compare, for example, a Blues recording of 1930 with a recording of Markos Vamvakaris, you can find many similarities. Love, pain, slavery, the hardships of the emigrates are common subjects in both cases."

Elena Falirea was born in Athens, Greece and is a professional musician and singer of Greek folk and Rembetiko music. She's the daughter of Tasos Falireas, an important LP producer and influential person of the Greek discography and local music scene. Elena has had instrumental performance and higher theoretical studies at the Philippos Nakas Conservatory in Athens. She's the guitarist, singer and performer of an outstanding presence and important collaborations in various venues.     Photo by Titina Milioti 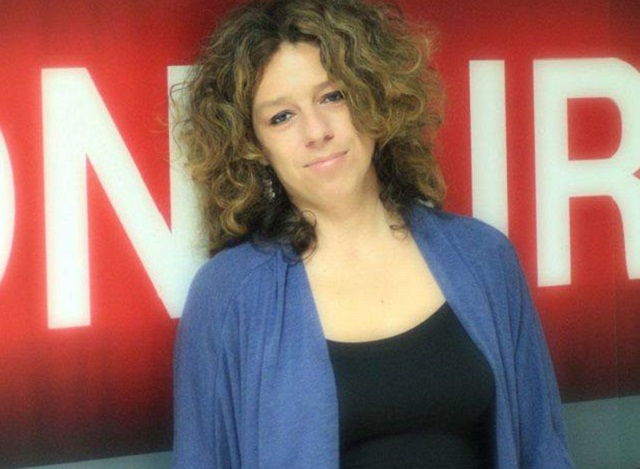 She is also the radio producer of "Laikoi Dromoi", a broadcast of folk and Rembetiko music with a large and loyal audience in the Hellenic Broadcast Corporation (E.R.T.). Apart from live performances, she currently prepares the release of her first personal album which will include new songs as well as editions of old ones.

What do you learn about yourself from the Rembetiko 'movement'?

The Rembetiko is a kind of urban Greek folk music. More specifically it represents the origin of the urban folk songs (laika). It emerged from the traditional songs (dimotika) and flourishes soon after the Asia Minor Disaster of 1922 and the forced immigration of 2 million Greek refugees. They brought with them their musical traditions and met with local musicians. So, to me, Rembetiko is a multicultural kind of music and it is the genre I chose to express myself and find my personal musical identity.

What touched you (emotionally) from this era?

It was the originality of music, the sincereness of the lyrics, the genuine inspiration-the feeling that I find myself in it, my soul, my roots.

What were the reasons that you started the Rembetiko researches?

I work as a musician from an early age, I come from a family of artists and so I have been singing and playing the guitar since I was eight years old.I listened to rock music and blues mostly when my uncle Grigoris Falireas produced an LP of Anestis Delias, a Rembetiko singer and bouzouki composer which I literally wore down with playing. This was the beginning of a journey, when in the age of twenty three, I started working as a professional musician of this kind of music. For the past five years I work as a radio producer of 'Laikoi Dromoi' (Folk Routes) at the E.R.T. (Hellenic Broadcasting Corporation). Finally I am preparing my first personal album.

I have listened to many different genres of music and I grew up spending a lot of time in record stores and recording studios thanks to my father Tasos Falireas. I am, therefore, open to all kinds of music provided that they have certain quality standards. As a musician and singer I deal with expression in an experiential way, that is, I do not play roles but I focus on the content of songs. I never sing a song that I don't understand its deeper meaning. To me, melody and lyrics are equally important.      (Photo: Elena & Thanasis Balaskas) 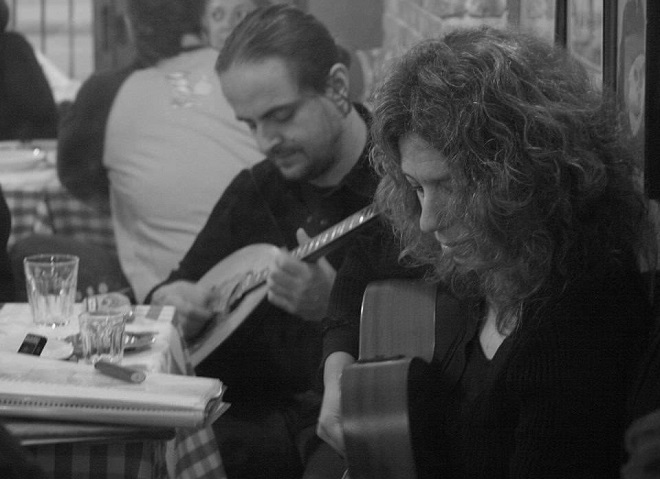 "The Rembetes were never mainstream bur rather lived on the fringes of society. The Rembetiko went through periods when it was either censored or even prohibited. For example, when Metaxas was in power, he banned the "baglama" claiming that it was an instrument created in jails."

As I was growing up and due to my father's professional occupation with music, I met many important artists and rembetes. One of them was the great bouzouki virtuoso Iordanis Tsomidis, who had a career in the USA and Europe. I also met Babis Goles who passed away recently and Nikos Papazoglou with his unique voice and personality. Finally, an unforgettable experience was my working with Lefteris Skantzakas, a violinist from the Greek island of Ikaria during the Ikarian panigiria (music and dance festivals).

Understanding that this is not a question of technical nature, I would say that the best piece of advice I was ever given was to love myself.

The music produced nowadays, apart from a few exceptions, does not have any originality, nor any primary inspiration. It is made mostly through computers and so the human touch and the contact among people or nature are completely missing. We should always keep in mind that today's culture is influenced by the current social, economic and political circumstances. Finally, I also miss the sense of romanticism and genuine inspiration of that era.

Considering that I live in Greece which suffers from an economic crisis for the past years, I have many fears. However, I hope that this crisis, which is not only economic, will help revive inspiration among Greek artists. Let us not forget that Rembetiko, our folk music, flourished during a period of crisis. 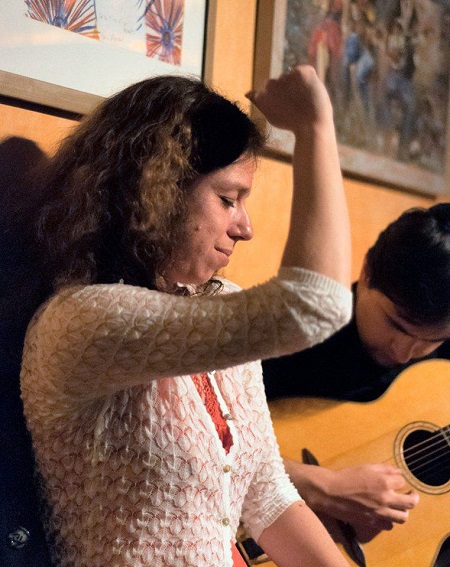 That would be unfair competition. We don't play music to compete with something but to express ourselves.

"We could say that the rembetissa was the first feminist in Greece. There is a number of songs of that period where this type of woman is revealed."

What are the lines that connect the Rembetiko with Blues, Flamenco, Fado, Sephardic and other local folk music?

The Rembetiko is in a sense a multicultural creation. It belongs to the same period of time with the Blues. Its origin of inspiration is the same. If you compare, for example, a Blues recording of 1930 with a recording of Markos Vamvakaris, you can find many similarities. Love, pain, slavery, the hardships of the emigrates are common subjects in both cases. It is well known that many Greek artists emigrated to the USA or Australia at that time and are influenced by the Blues and country music. The first bouzouki recording took place in the USA in 1932 with the song "Minore Tou Teke" by Ioannis Halikias, a bouzouki pioneer. In musical terms, Blues are more related to the Greek traditional music because of the use of the pentatonic scale as well as other traditional types of music of the world. But Rembetiko also originated from the "dimotiko tragoudi" (traditional songs) and is thus closely related to it. The Rembetiko incorporates folk music, music from Asia Minor, music of the Greek islands but is also influenced by European music through the Ionian School and the Asia Minor Greeks. It is inspired by love, the pain of love just like in the fado, is the expression of the poor, is created in the 'tekedes' (hashish dens) and brothels and incorporates the rhythm of waltz and tango. As for the sephardic songs, these must be considered separately because there was a large community of "sepharadites" in Thessaloniki until the Holocaust where there was a cultural osmosis between musicians. Typical examples of this case was the great female singer of Rembetiko and Asia Minor songs, Roza Eskenazi, as well as songs like "Mia Voskopoula Agapisa" sung in Greece and Spain (melody is the same, lyrics are different).

This is definitely one of the most cherished songs, especially in the live version with Luciano Pavarotti. But the song goes on with "but it wouldn't be nothing without a woman or a girl"... As a female artist I feel more confident in myself having a good music education and knowledge of musical instruments. Of course this would not be sufficient without the experience I have acquired. It is exactly what differentiates me from othe female singers- entertainers and their attitude. 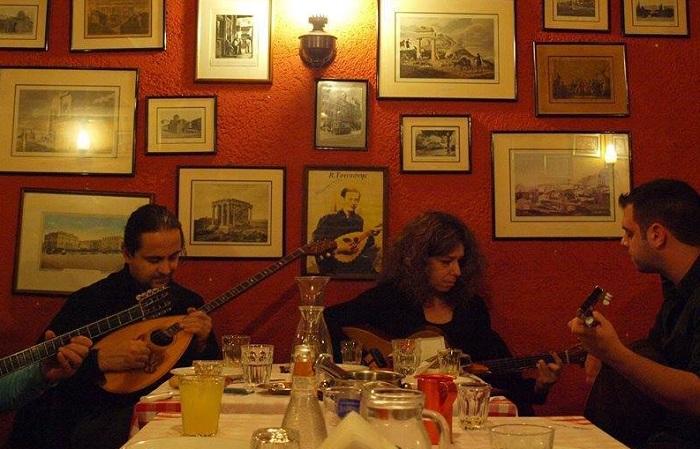 "Our popular music draws its musical ways from the depth of time and Rembetiko uses these ways that refer to our folk tradition. It enables us, the younger generations, who grew up in the cities, to find our roots." (Photo: Elena with friends plays and sings rembetika in an old Athenian taverna)

What is the status of women in Rembetiko?

It is true that rembetiko is created in an era when the status of women in society, both in Greece and globally, was very low. Female singers were considered immoral. Female song writers were not allowed to perform or to sign a composition.

As for the content of the songs, women are either glorified or condemned but they are always the main source of inspiration. A rembetissa (woman who sings the Rembetiko) was an emancipated woman who did not hesitate to enjoy herself in a nightclub or to revel with music and dancing or to play "barbouti" (a betting game) or to go to a 'teke'. We could say that the rembetissa was the first feminist in Greece. There is a number of songs of that period where this type of woman is revealed. One of them is "An Imoun Andras" (If I were a man) written by Vagelis Papazoglou and sung by Katina Homatianou in 1933.

What is the impact of Rembetiko music and movement to the racial, political and socio-cultural implications?

The Rembetes were never mainstream bur rather lived on the fringes of society. The Rembetiko went through periods when it was either censored or even prohibited. For example, when Ioannis Metaxas was in power, he banned the "baglama" (small stringed musical instrument shared by various cultures in the Eastern Mediterranean, Near East, and Central Asia regions) claiming that it was an instrument created in jails.

In 1949, Manos Hadjidakis, who was a young composer at the time, gave a famed lecture on Rembetiko at the Theatro Tehnis (Art Theater) of Karolos Koun. He presented Markos Vamvakaris (the great song writer) and Sotiria Bellou (the famous female singer) who then sang in front of a surprised audience. During that period, the Rembetiko spread in the popular areas of cities and slowly started to break their barriers although it was persecuted. That lecture really had an impact and Hadjidakis achieved his goal, which was to showcase the greatness of the Rembetiko and to make the bourgeois take notice of it and even love it.

Why did you think that the Rembetiko music continues to generate such a devoted following to new generation?                   Photo by Titina Milioti 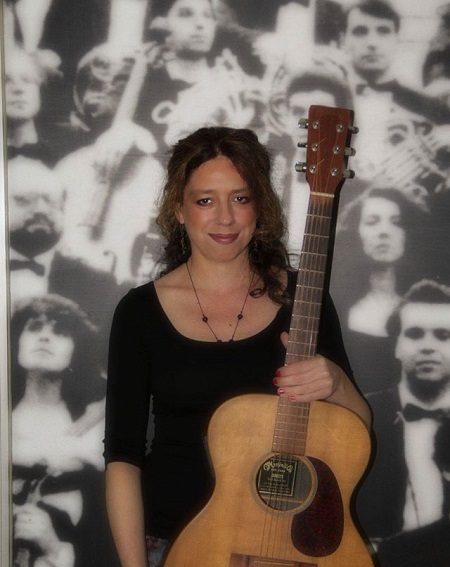 Our popular music draws its musical ways from the depth of time and Rembetiko uses these ways that refer to our folk tradition. It enables us, the younger generations, who grew up in the cities, to find our roots. It is also a daring, revolutionary music written in a period of crisis for Greece. That is why it sounds contemporary even a century later.

"It was the originality of music, the sincereness of the lyrics, the genuine inspiration-the feeling that I find myself in it, my soul, my roots."

Where would you really want to go with a time machine?

I would like to live in the Ancient city of Athens.

What would you like to ask Marika Ninou & Georgos Batis?

Nothing in specific. I wished, however, that Marika Ninou had lived longer so that we could have enjoyed more of her and that Georgos Batis had left us more recordings.