"Blues women are a little tougher and edgier because they have to be."

Debbie Davies is an award-winning singer, songwriter, guitar player of extraordinary talent.  A professional musician since the early 1980s, Debbie ranks among the top blues artists in the country. Growing up in Los Angeles in the 1960’s, she found that being a female guitar player meant only one thing: acoustic guitar. Electric guitars were still toys meant only for boys. 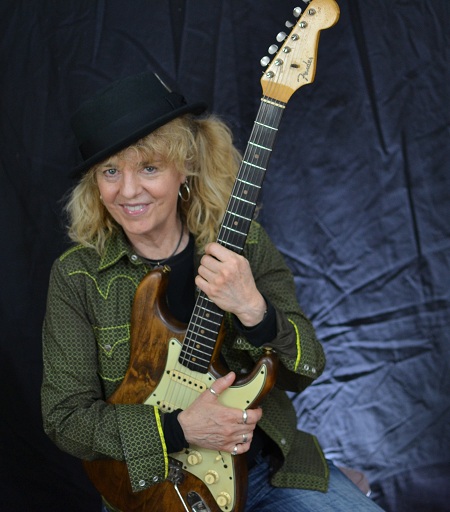 But when Debbie heard the sounds of the British blues-rock bands, particularly the electric guitar of Eric Clapton with John Mayall’s Bluesbreakers, she became completely captivated. Going against the grains of society’s accepted roles of the time, Debbie pursued her dream with the passion of an artist and the soul of a rebel.
Davies cut her teeth playing in blues and rock ‘n roll bands in the San Francisco Bay area before returning to Los Angeles in 1984, where she landed the lead guitar spot in Maggie Mayall and the Cadillacs, an all-female band led by wife of British blues pioneer, John Mayall. In 1988 she was recruited by Albert Collins to join the Icebreakers, and for the next three years she was a featured guitarist performing behind one of the most innovative bluesmen of all time. Since 1993, Debbie has produced eleven solo recordings and two collaborative CD’s, one with guitarists Tab Benoit and Kenny Neal, and another with guitarists Anson Funderburgh and Otis Grand. The roster of other artists who have joined Debbie in the studio on her recordings reads like a who’s who of the blues: Albert Collins, Ike Turner, James Cotton, John Mayall, Mick Taylor, Peter Green, Coco Montoya, Duke Robillard, Tommy Shannon, Chris “Whipper” Layton, Sugar Ray Norcia, Mudcat Ward, Charlie Musselwhite, and Bruce Katz.
A thirty-year veteran of the road, this latest recording leaves no doubt that Debbie Davies is truly one of the leading lights on the contemporary blues music scene today. 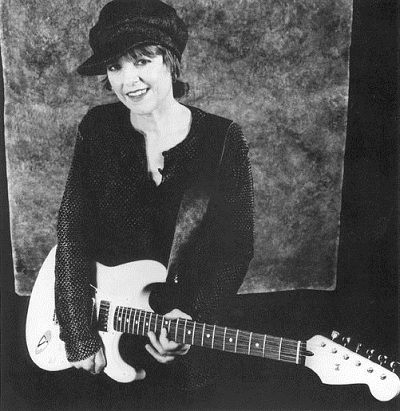 Debbie, when was your first desire to become involved in the blues?
Growing up in a musical home I heard all kinds of music.  I always gravitated to my dad’s Ray Charles collection and bluesy sounds.  I didn't know it was blues yet, but when I heard Eric Clapton playing with John Mayall's Blues Breakers, I knew I wanted to play guitar like that!

How has the blues changed your life?
The blues has givin' me the opportunity to see the world and meet people from all walks of life.

What do you learn about yourself from the road with the blues?
I learn about my strengths and weaknesses and that I can be very strong and resilient.  But also that it is very difficult to treat other people with the grace I want to when I am over tired and burned out.  This was the skill Albert had the best.

How do you describe your philosophy about the music and life?
We are always putting out energy and need to learn to choose to put out the best we can.  Other people struggle as much as we think we do.  Kindness is very important, and music is a way to reach people and help them feel connected to each other.  It takes us out of ourselves when we go with it.

What experiences in your life make you a GOOD musician, songwriter… and person?
I was blessed to grow up hearing so much music in my home.  It got in my brain really young.  I believe we are born with our musical talent but then we need to work really hard at our craft to become a decent musician.  I've worked very hard. 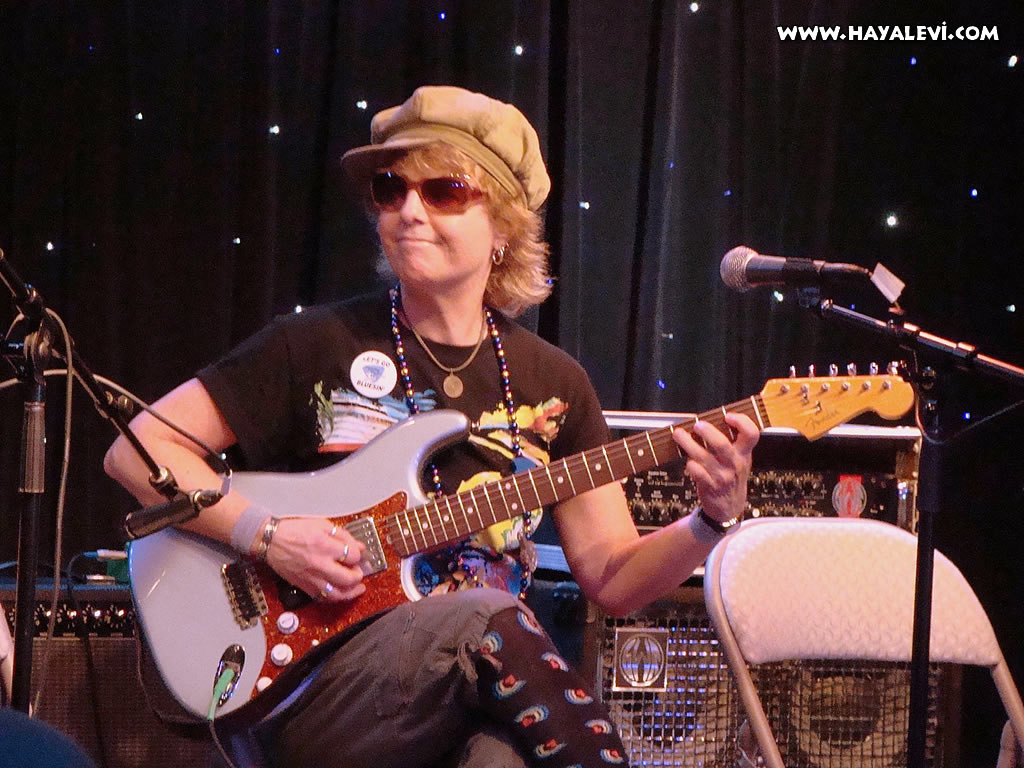 Which was the best moment of your career and which was the worst?
My worst time was before I got the gig with Albert and I was living on the floor of my sister's apartment trying to find gigs by night, jamming with everyone I could, and cleaning houses during the day.
My best time was the first time I was invited to sit in with Albert at the San Francisco Blues Festival and he also had Robert Cray sitting in.  I was on stage in front of thousands of people, standing between Albert and Robert! It was overwhelming and wonderful! What does Albert Collins mean to you & what does “Mr. Frosty” offered you?
Albert Collins was my doorway into the real, old school, deep blues.  What I learned most from Albert, as I said, was "grace under fire."  He was a type I call a "sensitive tough.” I learned how to approach the road and give my all every night on stage no matter what the travel had been like.

Which memory from Albert Collins makes you smile?
Albert had a great sense of humor, so my favorite memories are when we got very silly and had a lot of laughter.

Of all the BLUES people you’ve meeting, who do you admire the most?
I admire Albert Collins the most.

What is the best advice a bluesman ever gave you?
In the words of Albert Collins...."don't lose your cool!" 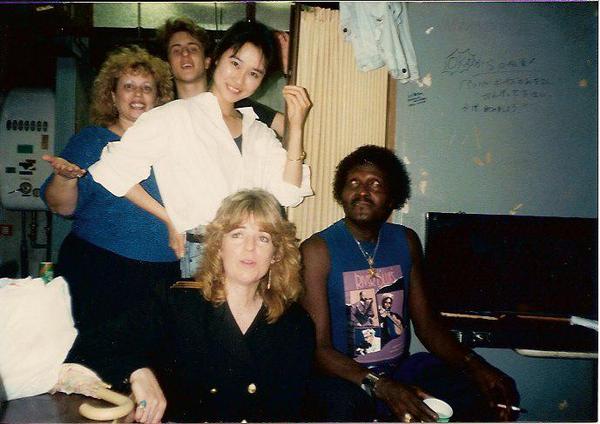 Would you like to tell something about making this new album? Are there any memories from studio, which you’d like to share with us?
The new album, AFTER THE FALL was recorded at Fat Rabbit Studios and Produced by the multi talented Dave Gross.  Working with Dave was an incredible experience as he brings so much to the project with his ability to play so many instruments and his great ears.  Working with such a producer really is the heart of this project, and that fact that Dave's number one instrument is guitar, was so awesome because we could work out all kinds of guitar parts.

What is the “think” you miss most from Maggie Mayall and the Cadillacs?
The Cadillac's was a great experience at the time.  I miss my youth!

Which of historical blues personalities would you like to meet?
I have met most of the blues people I have wanted to meet.  The one I have never met or played with is Eric Clapton.  That would be a thrill. How you would spend a day with Sister Rosetta Tharpe?
A day with Rosetta Thorpe would be all abut talking and hearing her stories and her history as a woman player.  Maybe we would do a little picking. 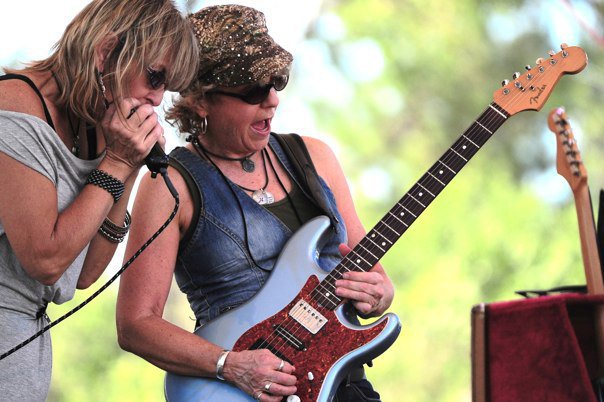 From the musical point of view is there any difference and similarities between: bluesman & blues woman?
Blues women are a little tougher and edgier because they have to be.  Sometimes blues women get away with being sexy on stage and don't work as hard at their craft.  I'm always looking for the really great musicians, male and female.

How does the female feeling come out of the music and your songs?
All my songs are from a woman's point of view.

Happiness is……
Happiness is peace of mind.  When you can get on stage with the right frame of mind, the music is pure joy.