"The blues is the redemption, when you have hit the bottom and you know it, that's when the healing starts."

Amy Hart was born and raised in the Chicago Area. She began singing in blues bands in Chicago as a youngster and has opened for Koko Taylor, Junior Welles and James Cotton. She started her own blend of roots and blues in the 80's and started travelling as a solo artist. She has played all over the US, made several records including, "Too Cruel" a cut on the soundtrack to the Mercury Records release, "Girls Just Wanna Have Fun... the movie". In the nineties she made her first solo cd, "Every Beat of My Heart" on her own label, Painted Rock Records. Most recently Amy Hart lived and played along the Gulf Coast, making a living as a singer/songwriter until the Horizon Oil Rig Incident changed her destiny. She actually became homeless after losing all her gigs when the economy in FL tanked. She shipped her daughter off to College and lived in her car to keep her kid in school while she looked for work. She turned down a recording contract in Chicago and drove to Nashville with 40 bucks in her pocket and stayed with some friends till BP started cutting some checks. Then she started cutting some tracks. What has resulted is this latest release "Congratulations" which actually chronicles her own homelessness, unemployment and ultimate redemption.
About a year ago she met her husband Wally Hoffmann who plays the acoustic bass and the two have become a formidable writing and production team. Joined by some hot Nashville cats, the Amy Hart Band. 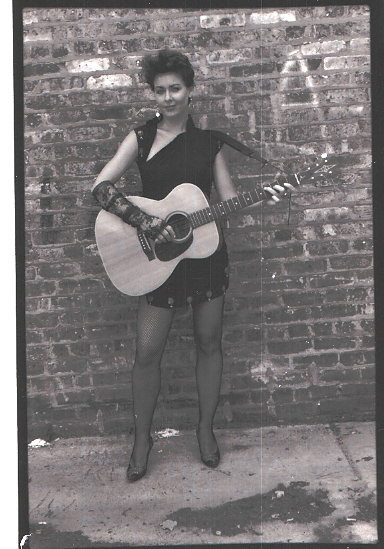 Amy, when was your first desire to become involved in the music & How has the blues music changed your life?
I started playing piano at age 2, just felt comfort in making music. I spent hours and hours playing and listening. When I was a teen in Chicago I started playing the blues, it was the only music around! Blues and Jazz, were all you heard in the streets of Chicago. I was too young to play in clubs so I played at festivals and in the streets.

What was the first gig you ever went to & what were the first songs you learned?
My first gig was at a festival in Chicago, Mayor Jane Byrne's Summertime Chicago was a citywide event in the 80's. The band was "Flash Point", and the first songs I learned were Stormy Monday, and Can't Turn You Loose.

Which was the best moment of your career and which was the worst?
The best was last Saturday Night, we kicked it hard! Had some great players and it was heaven. The worst, I don't know... I only remember the good stuff!

How/where do you get inspiration for your songs & who were your mentors in songwriting?
My inspiration is real life, most of my songs are from real life experience. Mentors come and go, right now I am very into T Bone Walker. I love Buddy Guy, Robert Johnson, Howlin' Wolf, these are my current heroes and who I am listening to right now, and adding their songs to our show.

Any of blues standards have any real personal feelings for you & what are some of your favorite?
Stormy Monday is a favorite, I have been singing it for years and love it even more now than when I started. I also love Summertime, and new favorite is Killin' Floor. 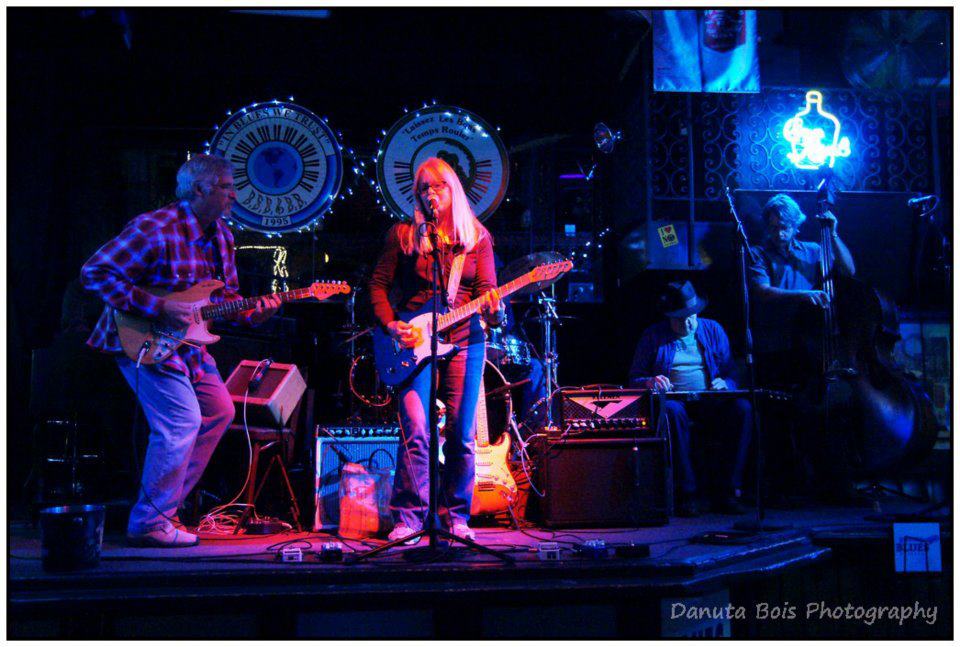 Do you think that your music and songs comes from the heart, the brain or the soul?
It starts in the soul, and if you can really let it get into your head, then you've got a song that will heal many hearts! The hardest part is keeping it pure from the heart and just letting yourself be the instrument.

What do you learn about yourself from the blues music?
Its all about having faith, being willing to let God show you the way. Surrendering yourself to something greater. Being a blues artist is a most honest and humbling experience. It’s a great way to entertain, and to express yourself.

Tell me about the beginning of the band. How did you get together and where did it start?
I love my band. We are all from the same neighborhood; we met in the local clubs. We all just want to play beautiful music, so that’s what we try to do. My husband Wally Hoffmann plays the acoustic bass with us. We met at a local jam and fell in love right away. We knew we would marry and play music together forever. So far, so good! What characterize the sound of the Amy Hart Band?
Its very simple. We all allow each other the space we need to fly. I have to say that no one overplays, and we all fill a very unique space, we are all equal and respectful, no one is trying to be a star. I think it comes thru to the audience that we are all there just to have fun and entertain.

Do you remember anything fanny or interesting from the recording hours?
I got stung by a wasp the night before we recorded the album. My right hand, my rhythm strumming hand swelled up like a baseball glove, but I played anyway. I kept it in an ice bucket between takes. I wasn't going to cancel because of a bee sting! I am very allergic, and I eventually had to leave to go get a shot, but not till after I finished my rhythm tracs. The session players were fantastic, and I really felt at home with them. It was not a typical Nashville session, and I think they appreciated that I was doing something different and they went whole heartedly down that road. It was amazing. I feel very grateful and blessed. 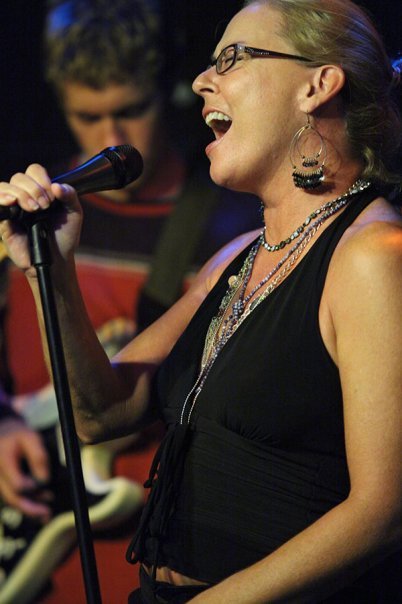 What are some of the most memorable gigs and jams you've had?
Honestly last week was unbelievable. We had this guy, David Boisvert show up to sit in on sax and he just killed it! I know I will be using him more! I am really excited about the horns, and feeling confident that I am ready to handle a big band with a horn section. Another great night was at Bud and Alley's in Seaside FL. I had a gig with 3 other players and we had never played together, didn't even know each other! Mickey Adams on guitar, Me, Paulie Andre on Drums, and Sol Morgan on bass. After the first few bars we just looked at each other and rocked, we were flyin blind and it was like a dream coming down from above... Stuff like that happens! There was another great night in the 80's when I lived in LA, The Neville Bros had the rehearsal space next to mine, and one night I jammed all night with them. My pickguard was bloody when I left at dawn.

Are there any memories from the years in Chicago , which you’d like to share with us?
I love Chicago. The early days were so much fun and I learned so much. I had no idea what the Blues was, it was just good music. Now I know how blessed and lucky I am to have had those early days and to have been exposed regularly to all that good music. It was everywhere you went. Lincoln Ave, Rush Street ... these were my first experiences of Blues in Chicago.

I wonder if you could tell me a few things about your experience from open act to Koko Taylor, Junior Wells and James Cotton.
I wish I knew how lucky I was back then! Koko Taylor had the biggest voice in the business. She taught me how to sing Stormy Monday. I felt very proud and honored to open for her at the Kingston Mines. I was blessed to sit in regularly with Junior Wells on the Monday night Jam that he hosted at B.L.U.E.S. on Lincoln Ave. James Cotton is a very generous man. He would call me up to sing with his band at The Kingston Mines. I was very young then; I think he thought I was just very cute, a little white girl from the suburbs singing the blues! But I am so grateful, and wow what an experience it was! From whom have you have learned the most secrets about blues music?
The guys in FL! Some of the players I worked with including Lenwood Cherry and Edmo Lanier. Lenwood has an amazing voice, I have copped some of his licks! And Edmo, his sense of style in delivery, he is a master at being totally cool. I hope that I absorbed just a little bit of his cool. Fritz Froeschner is one of the best blues guitar players you will ever hear, I played with him regularly. He taught me a lot of guitar stuff. Bob Britt who is on my cd, his playing I think has influenced me the most recently. He is a genius.

Some music styles can be fads but the blues is always with us. Why do think that is? Give one wish for the BLUES
Blues is a spiritual experience. Not everyone gets it right away, but we all get it eventually. I am so glad its always there! I wish the Blues long life that the songs and singers continue to charm the world forever! 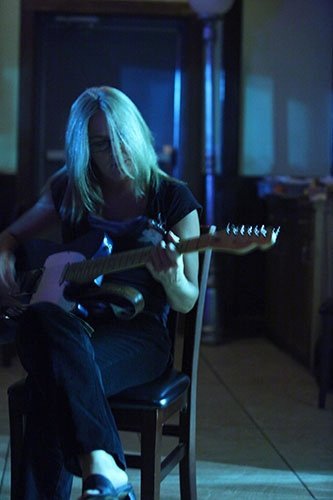 I've heard two sayings about the blues, which are a little bit confusing. One is "Blues is a healer". Another one "You have to feel blue to play Blues". If it's supposed to be a healer, why should it make one feel sad?
I think the blues make people feel good actually. I know that they make me feel good. I guess you have to feel bad in order to feel good. You wouldn't know well from bad if there wasn't some redemption. The blues is the redemption, when you have hit the bottom and you know it, that's when the healing starts.

What experiences in your life make you a GOOD musician and songwriter?
Practice makes a good musician, and songwriting is a gift that comes with willingness to go down the road wherever it may lead. There are always surprises in good songwriting. I know a song is good when the words and music just flow, easily.

Which is the most interesting period in your life and why?
Right now, today. I am so happy, full of inspiration. I am at peace with myself now, and I plan to stay that way!

Which things do you prefer to do in your free time? What is your “secret” DREAM? Happiness is……
Happiness is knowing that everything comes from within, that I choose to be happy right now. Happiness is doing something you love, and for me that is music, playing, singing, writing, listening, and living my dream, traveling, creating music. I also like hanging out at home with my husband, we have a little farm and we love to garden and hang out with the dog and the chickens! 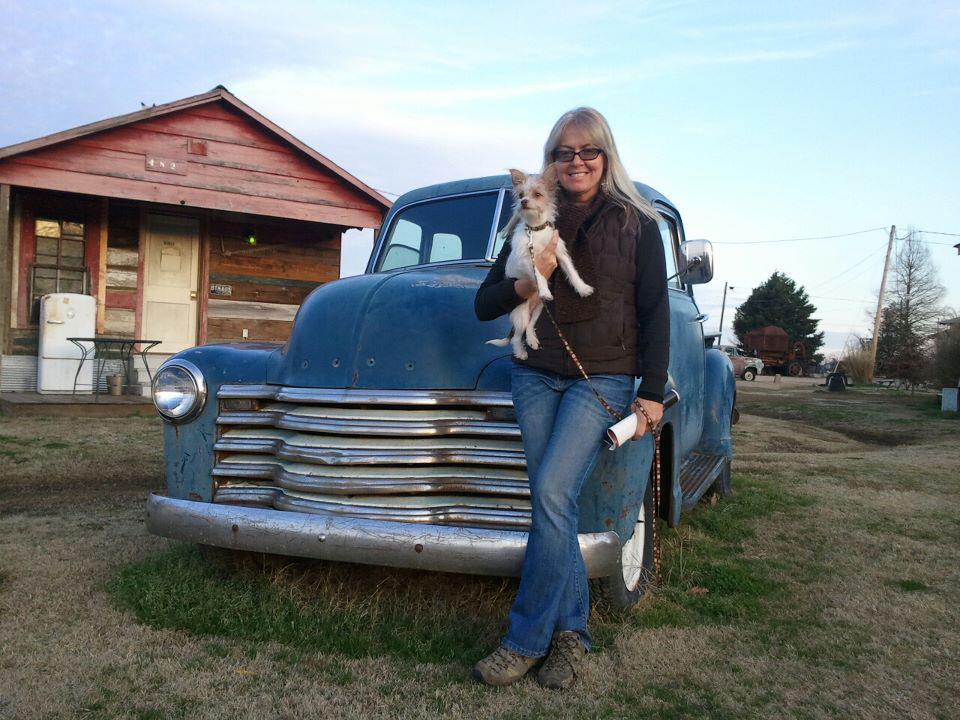