The Don Quixote of  Blues in Windy City

Harmonica Hinds has performed in the Chicago land area since the early 1970s. He performed in the house band at Theresa’s Lounge. Other members of the band included Junior Wells, Sammy Lawhorn, John Primer, Earnest Johnson, Nate Applewhite and Muddy Waters Jr. 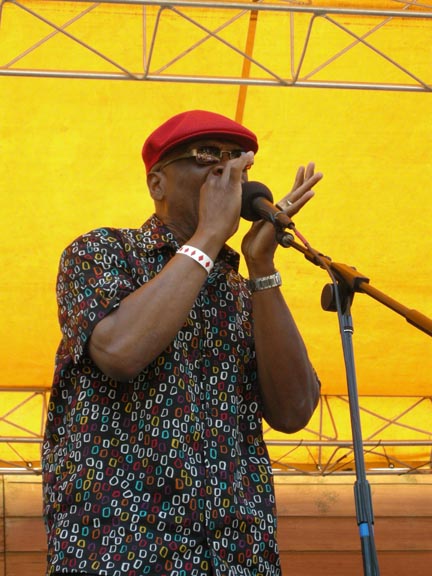 Hinds has also made appearances on the albums of Koko Taylor, Lefty Dizz, Moose Walker, John Primer, Eddie Taylor Jr., and Mud Morganfield. Hinds also had a role as a harmonica player in the Black Ensemble’s Theater production of “Muddy Waters, Hoochie Coochie Man”. As a member of the New Generation of Chicago Blues he has performed in the 1977 Berlin Jazz Festival, 1991 Burnley England Blues Festival, 1998 Park Tower Blues Festival in Tokyo, Japan. And he has also performed at the 14th, 15th, 20th, and 24th Chicago Blues Festival.

Harmonica Hinds also has many friends and acquaintances in the blues community. He has shared the stage with Pinetop Perkins, Willie “Big Eyes” Smith, Louisiana Red, Louis Myers, Dave Myers, Willie Dixon, Magic Slim, Fred Below, Willie Kent and a host of others.
Harmonica Hinds continuously performs solo and with his band throughout venues across the Chicago land area. He can regularly be seen at Buddy Guy’s Legends. His performances remain up-beat and soulful. He remains vibrant and enthusiastic as he sings tunes heavily influenced and taught by Little Walter, Louis Myers, James Cotton, and Sonny Terry.

The best moment was when I met Louis and Dave Myers and being able to learn about the sociology of the music. The worst moment was the passing of my parents. 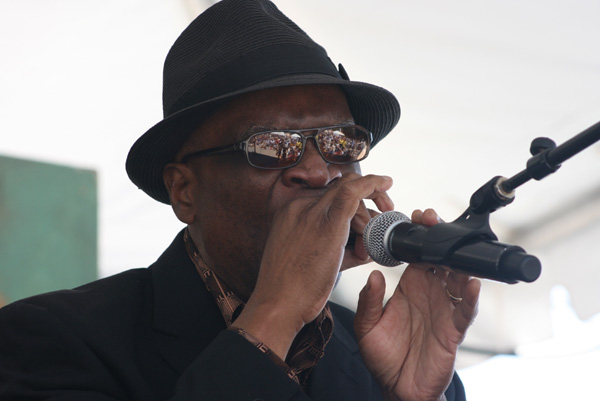 "My one wish will be for the musical form and the culture which provided the basis for its origination to be appreciated and respected."

Which advice Koko Taylor has given to you and which memory from makes you smile?
I was able to do an album with Koko Taylor through Sammy Lawhorn. I never got any advice from her. Her Earthshaker album was my first recording experience.

What experiences in your life make you a GOOD BLUESMAN?
Just living life with its ups and downs as I stated in my song on my last CD "Harmonica Hinds - If Speed was just a Thought", "Traveling on this Road". I have to work for what I want. Nothing was given to me on a silver platter.

Do you know why the sound of harmonica is connected to the blues and what characterize the sound of Chicago blues harmonica?
The harmonica was one of the early instruments, together with the guitar, in the blues. The guitar goes deeper into Africa. When Little Walter amplified the harp, that laid the foundation for the Chicago harp style. The harmonica is a simple instrument and at the same time difficult to play. Initially it was cheap. The harp and guitar go good together in the Blues. The bending of the strings on the guitar and the choking of the notes of the harmonica provide the feeling of the music which is based on feeling experiences. 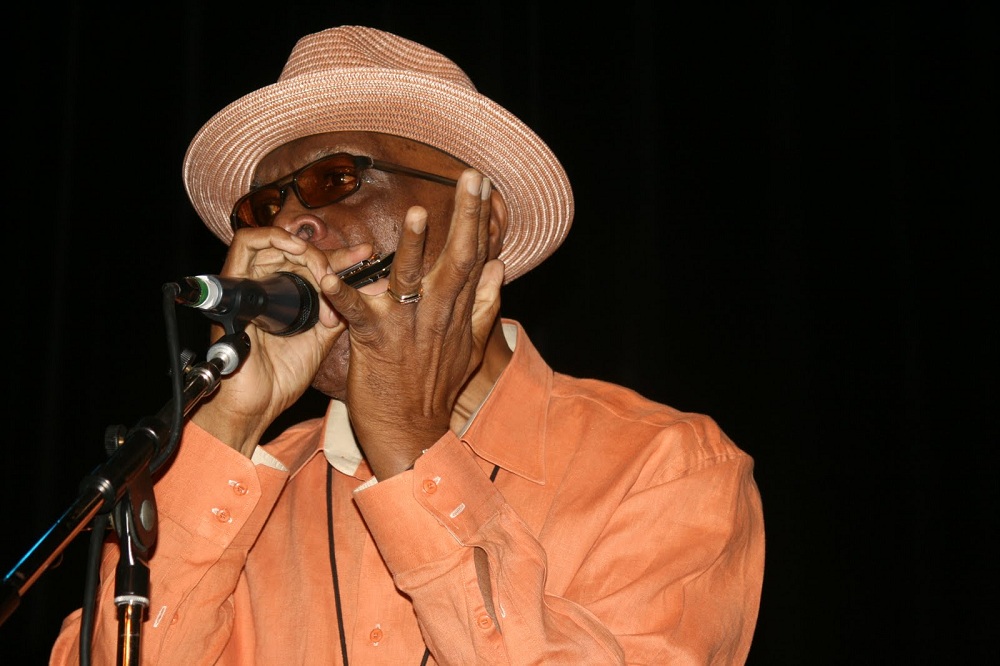 "The blues is competing with other musical forms for exposure in the media and in the local venues."

Some music styles can be fads but the blues is always with us. Why do think that is?
Willie Dixon stated "The Blues is about life". Then, I heard Buddy Guy state one time" If you think you don't have the Blues, keep living".

Give one wish for the BLUES.
My one wish will be for the musical form and the culture which provided the basis for its origination to be appreciated and respected.

How has the music business changed over the years since you first started in music?
Technology made a great impact on the music and the business of the music. The computer industry has changed everything. What I'm doing now is a result of those changes. Being connected online helps. Last year I went to Brasil and Chile. That trip came about as a result of online connections.
There are Blues Societies and Blues Foundations  which are presenting all kinds of things from concerts to festivals to you name it. They are having a tremendous impact. 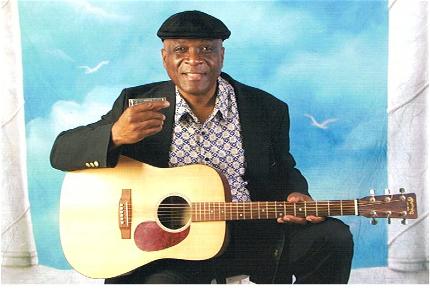 Are there any memories from “THE ROAD FOR THE BLUES”, which you’d like to share with us?
I was born on the Island of Trinbago. One year I visited and went up to the Laventile lookout to view the city of Port of Spain. While I was there, a guy was playing a quarto. I asked him to follow me and I took off on a boogie. Man, that was one of the best jams I ever had. My wife and I visited Niarobi a few years back. We went to a club and I sat in with the band and we played some Blues music.

From the musical point of view is there any difference and similarities between the 70s-80s Blues & modern Blues?
Things are becoming more technological as I stated in my earlier answer. People are still living their lives. It's a different era. There's a Black President now but at the same time many of the problems which existed then exist now.

What are your conclusions from the local blues scenes all around the world?

The blues is competing with other musical forms for exposure in the media and in the local venues.

What is the “think” you miss from the “OLD BLUES”?
The people who created the musical form many of them have passed away. 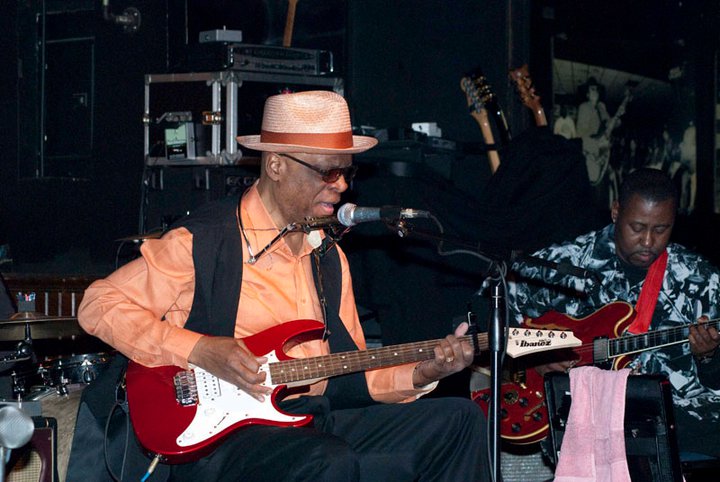 "Music is an expression of life. What you experience in life comes out in your music." (Photo by Liz Sloan, Harmonica Hinds & Eddie Taylor Jr.)

I’m willing to learn and grow.

Music is an expression of life. What you experience in life comes out in your music.

It’s something you have to keep working at.I’m on stage to entertain, to help people to have a good time to help them to feel relax to help put a smile on their faces.

Describe the ideal blues band to you?

In playing the harmonica I want to have 2 guitars, bass, drums and myselp on harp and vocals. 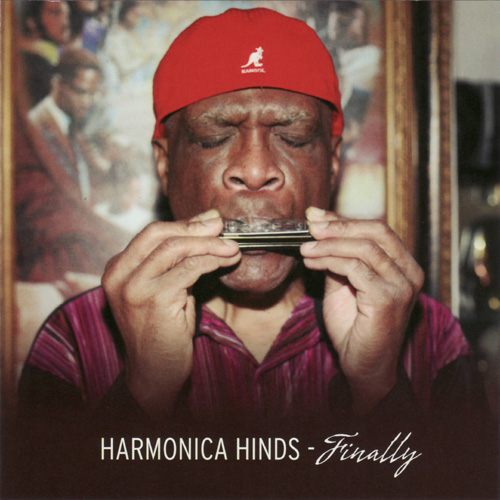 Why do you play blues?

It’s whats  been given to me  to make a contribution to the situation we’re in.

"The best moment was when I met Louis and Dave Myers and being able to learn about the sociology of the music."

A musician you is doing his part.

What does the blues offer you?

Right now, what I’m understanding and what I’m experiencing.

In my life I have always been involved in music.

What does: “Harmonica”,  ”Chicago” and ”Koko Taylor” mean to you?

A harmonica is my major instrument of expression. Chicago is the city where the blues got its urban foundation. Koko Taylor was my first recording.