"I think the whole music scene in the 60s/70s was conducive to change a lot of things and enhanced the freedom of expression in artistic ways... All that overflowed into art. There was a cultural and social revolution that took place."

International artist Tom Noll was born and raised in the midwest on the outskirts of Milwaukee, Wisconsin. Always an artist, Tom loved drawing as a child, even when his hand would get cracked for drawing “left handed”. With a love for ink on paper, Tom pursued an education in the printing and publishing field, and then within a few years, received a second degree in graphic design and illustration for the world of print and advertising. Working in the creative field, Tom has the well rounded insight for getting ideas from the concept stage to completion. With years of the hustle and bustle of the corporate world, the fine arts have always served as his creative outlet, and safe refuge.        (Photo: Tom & Rory Gallagher) 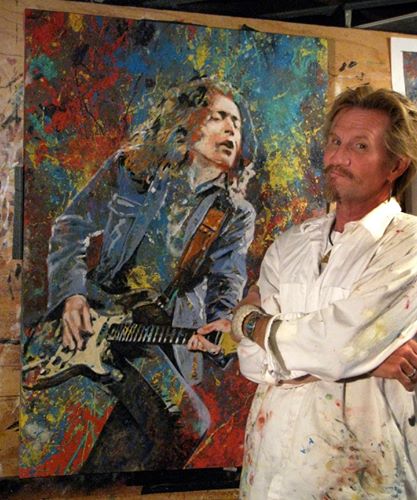 Originally painting in watercolors, Tom traveled the art fair circuit, displaying his fluid landscapes and figural works. In later years, his painting interests moved to acrylics and oils as he enjoys the thick paints and builds of color that can be applied to so many varied surfaces. His attention turned to abstract expressionism with large pieces that fill rooms with rich free-flowing color and movement. In the recent rock series captured in oils & acrylic on canvas, he incorporates his bold abstract strokes and vibrant colors into moving pieces that capture the essence of the music and the musicians. Marketing his art worldwide, Tom finds great pleasure in sharing these images and talking with people around the globe who are passionate fans of the rock artists portrayed, and are proudly displaying these works.

In addition to painting, Tom enjoys sculpting and until recently, moved his talents outdoors in the Wisconsin winters to carve giant blocks of snow in various competitions, Before retiring from this COOL art form, he & his 2 team members were Wisconsin’s 2007 & 2008 State Champions and 1st place “People’s Choice” winners, and 3rd in the nation at the “2008 US National” snowsculpting competition. Tom continues to pursue the challenge of the next painted piece, as blank canvas transforms with the inspiration and energy that beckons his heart and hand.

When was your first desire to become involved in the visual art? What does "ART" means to you?

My first desire to pursue an art career was probably when I realized I wanted it, not because my mother and others were telling me I was good. That was a long time ago!! To me, art is expressing something creative that comes from within. Creating something to elicit a response from a viewer, be it myself or another.

What characterizes the artistic philosophy of Tom Noll and how do you describe your artwork?

I guess my trademarked phrase “Art that Rocks”™ pretty much explains the story of my current musician series. It’s art that takes on the feel and the emotion of the music produced by my subjects. The energy of my abstract backgrounds lays the groundwork for an exciting musical adventure. You know, “Art that Snoozes” would be a whole different experience. "I find it interesting about the allure of the American Blues scene to the British rockers back in the day and how they brought attention to the Blues that previously was pretty self contained in the US. The mutual respect is a bit heartwarming, and is heard in many recordings. I try to capture that feeling on canvas." (Photo: Tom with Les Paul, Jeff Beck, Jerry Garcia & Eddie Vedder)

What experiences in your life have triggered your ideas for artwork most frequently?

Hmmm…with some health issues that I’ve overcome, I’m always aware that we’re only here for a short time and it inspires me to capture the legacy of specific musicians that have left their mark and have changed the lives of others through their music and beliefs.

Well, I’d sung in some bands in my early teens and realized then the enjoyment of creating an experience for others. My first concert I ever attended was Jimi, so that says a lot about my musical influences that followed.

When I paint a portrait of a musician, I listen to their music and their genre. I like to find what influenced them, and of course that sets the mood and heightens the thrill of what I’m creating.

What first attracted you to Blues and Rock & Roll culture and how has changed your life?

Johnny Winter, hands down! Everything else we were listening to in the late 60s, heading into the 70s was hard rock with the shift from the commercial AM stations to underground FM radio. The first Johnny Winter album was so different, it tore my head off. Hooker and Heat was also a well played album that opened the door to John Lee, Muddy, Willie Dixon and the likes that set the stage. Suddenly the Blues was on my radar and I realized the influences of some of my favorite Stones and Zeppelin tunes.

What do you miss most nowadays from the music of past? What are your hopes and fears on the future of Art?     (Photo: Tom & Johnny Winter) 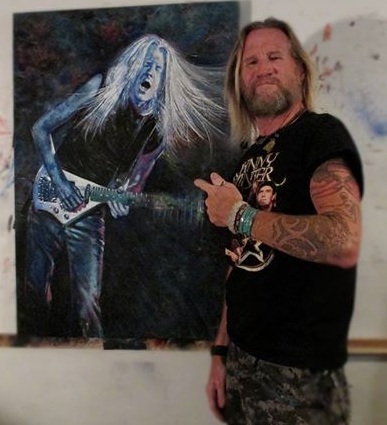 Maybe a little of the mystery of who’s behind the music. In the early days, you only had a glimpse of the musicians from the album covers, Rolling Stone Mag. or a rare TV appearance. Boy, then you’d see them in concert and it was over the top.  I remember what an event a new album release would be. Friends would gather to party with the focus of hearing the brand new music.

I also do miss the larger format of the album art. Now, with my large oil paintings and the high quality giclee prints that I offer, its very fulfilling to know that thousands of people have their musical heros displayed on their living room walls, focused on how basic the music is in their lives. My art ignites emotions on a lot of different levels.

Think about how our record collections are mini art collections with such varied styles, one after the other. Maybe with vinyl becoming popular again, my hope is that album art will become the art form that it has been in the past.

What has made you laugh lately and what touched (emotionally) you from the music and art world?

Probably Joe Walsh and his Analog Man CD. Joe has always made me smile with his natural sense of humor. That’s good!

Emotionally would be the humbling experience of meeting Johnny Winter in June, and losing him in July. I was fortunate to be able to show him a photo of the painting I was working on of him, and I wish he could have seen where I went with it.

What is your favorite artwork and what is the story behind it? Which memory makes you smile?

My favorite painting may be my David Gilmour of Pink Floyd. It has incredible atmosphere to it and super detail. I was given the image to paint from by a photographer in Austria, Rene Huemer, and it was so cool to just nail it. I’m not the only one to feel that way as its my biggest selling print.

What makes me smile is when somebody recognizes me and they tell me they’re a collector of my work and how happy my art makes them feel. It just happened few nights ago in Chicago, two hours from our home at a Ronnie Earl show. Those encounters bring it all full circle. 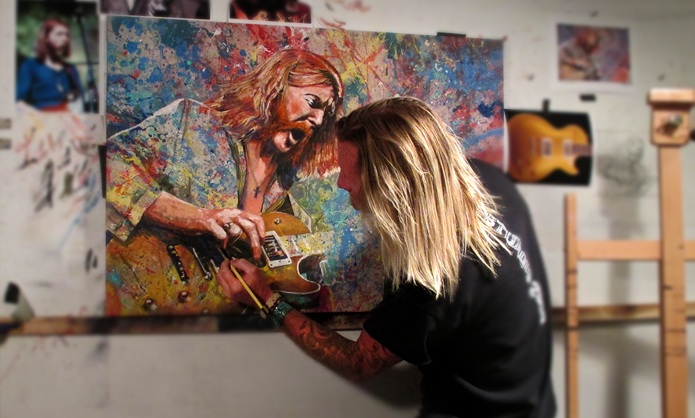 "To me, art is expressing something creative that comes from within. Creating something to elicit a response from a viewer, be it myself or another." (Photo: Tom & Duane Allman)

What's the legacy of Rock n’ Roll in Art? What do you learn about yourself from the Rock n’ Blues culture?

I think the whole music scene in the 60s/70s was conducive to change a lot of things and enhanced the freedom of expression in artistic ways, ie. in clothing, hair, social gatherings, etc. All that overflowed into art. There was a cultural and social revolution that took place. It took a stand against the establishment, and it hasn’t backed down.

I guess I learned from the Rock And Blues culture about how far reaching, both worldwide and within each of us the music can take us, and how I play a part in reaching out to others through my art.

Which incident of Rock n’ Blues history you‘d like to be captured and illustrated in a painting with you?

I find it interesting about the allure of the American Blues scene to the British rockers back in the day and how they brought attention to the Blues that previously was pretty self contained in the US. The mutual respect is a bit heartwarming, and is heard in many recordings. I try to capture that feeling on canvas.

How you would spend a day with Duane Allman? What would you like to ask Harley & Davidson?

You mean other than picking his brain in a lazy day of fishing? Being that I recently devoured many books about him and have been developing the “Skydog” painting, both in my head and on canvas for the last couple months, I feel that I’ve been spending lots of days with him, bringing his spirit to life for others to enjoy. Duane never got to realize what a big influence he would become, so I guess that would be an interesting conversation to have.

Harley & Davidson… you mean the founders of our little hometown motorcycle company? Being that I’m from Milwaukee, Wisconsin, USA, I often wonder if they too ever realized the impact they’d have on the world. We all love our Harleys and it’s easy to get a hard driving Allman Brothers tune stuck in your head on the long ride. 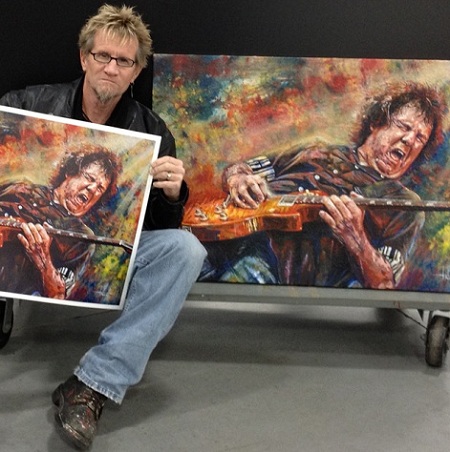 Hmmm…sorry for the long pause. That would be a tough choice between many. Maybe back to 1967 for a visit to the Monterey Pop Festival in Monterey, California, USA. Back before cell phones and the internet. Back with Jimi and Janis. And why? Well, see most of the previous answers regarding the melding of art, music, different cultures, inspirations and influences. If all this is too much to ask…just transport me to a Gary Moore concert.

Time machines aside, allow me to continue to provide the beautiful memories of our past and present music heroes with my “Art that Rocks” music series. Enjoy!!!