"The Blues to me offers more than just the emotions that most music brings, it also offers what seems like a conversation between instruments, it reveals emotions that we didn’t know existed."

Marianthe Boyagis Snyder began painting in 1981. Her first inspiration came when she was first introduced to oils. While spending most of her childhood in Atlanta, Georgia, she was an understudy of two established artists, Anne Jackson and Mark Lucas. As time past, Marianthe’s inspiration was life itself. Marianthe had the opportunity to live in Thessaloniki, Greece as a child. As an adult she has lived in Rimpar, Germany and throughout the US. Marianthe has traveled extensively throughout Europe, Asia, Africa, the Middle East, Australia, New Zealand, Polynesian Islands, South America, and all over the United States. Through her travels, she was able to study the art of the past and present in various cultures. Marianthe has found inspiration in the various architectural styles, museums and the diverse people she has met during her travels throughout the world. Marianthe has sold her paintings in auctions, art galleries and she paints commissioned pieces for interested clients. Marianthe has received recognition in several community art competitions and at the US Army Forces Command art competition. Marianthe also uses a percentage of her sales to help support Love’s Reach International, a non-profit organization that helps orphans. Marianthe and her Family also show support for Wounded Warrior Project. Most of Marianthe's subject matter consists of memories of her travels, still life, floral and landscapes. Now Marianthe concentrates on her art as it continues to develop and evolve. She hopes to continue to share her interpretation of her life experiences as God reveals each new-inspired day.

My experiences through travel, my childhood in Greece, observing my parents and their zest for life, through music, art and faith.

How do you describe and what characterize Art by Marianthe and your artwork philosophy?

My Art is not about me. The desire to create art was place in my spirit from the beginning. I believe our gifts flow through us and I was only given the ability to paint, so that I may bless or inspire others through my work. My art is also a therapy for me, to paint through life, what I’m feeling and what I have learned through living. 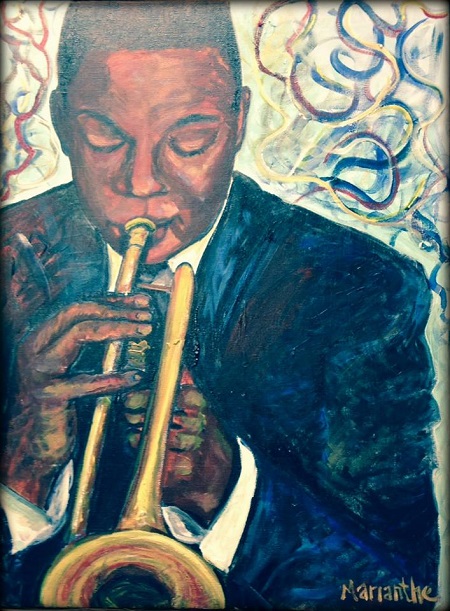 Music is embedded in my DNA, my mother was a musician and could play many different instruments She taught us to sing and would sing together often as a family.

"My experiences through travel, my childhood in Greece, observing my parents and their zest for life, through music, art and faith."

The Blues to me offers more than just the emotions that most music brings, it also offers what seems like a conversation between instruments, it reveals emotions that we didn’t know existed.

In the past it seemed a little more natural and pure.

My hope for art is that humanity will grasp and will truly understand the value of music and all types of art is what it does for the human spirit, not what it may sell for or how much money it might generate.  Money will always be spent, but the spirit will remain and the arts truly provide a depth to the human spirit, like nothing else. My fear…might be that the world will allow technology to take away the simplicity of all that is beautiful.

I would not change the art, but only wish for a more genuine audience at times, that recognizes art for what it is, not what the latest trend says it is.

What do you learn about yourself from the blues and jazz music?

I have learned that the blues and jazz allow me to embrace my emotions from a different perspective and the music inspires me to paint what I’m hearing in the music. 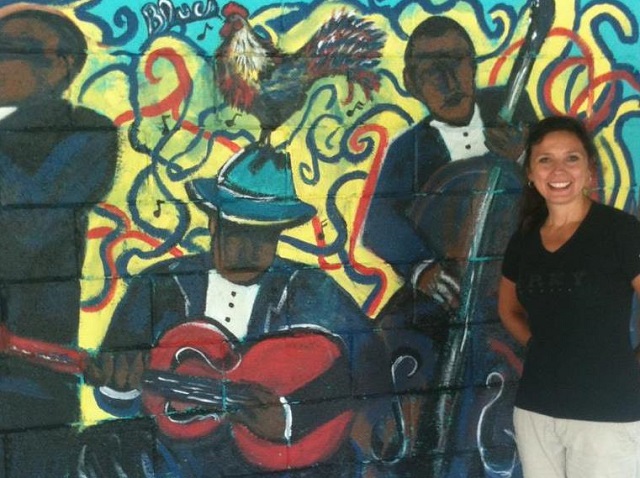 "I believe the Shoals music has an earthiness and genuine quality to it.  It’s the simplicity of the sound that makes it appealing. The raw emotion that flows through the music is un-mistakably the Shoals Sound." (Photo: Marianthe and her murial at Champy's Shoals, Alabama)

I believe the Shoals music has an earthiness and genuine quality to it.  It’s the simplicity of the sound that makes it appealing. The raw emotion that flows through the music is un-mistakably the Shoals Sound.

The Blues reminds me of the history of its roots, the struggles and the passage of the musicians that brought it through the test of time, in spite of what difficulties may have been, whether it was racism or poverty, the blues made it through to our generation.

What are your conclusions from your trips around the world?

I have learned to embrace each culture for the richness it offers and appreciate them all individually for their uniqueness and history. World Travel brings better perspective and appreciation for humanity and while we are all so different, we are all really the same at heart.

Which is the most important experiences?

What has made you laugh lately and what touched (emotionally) you from the folk artists of planet? 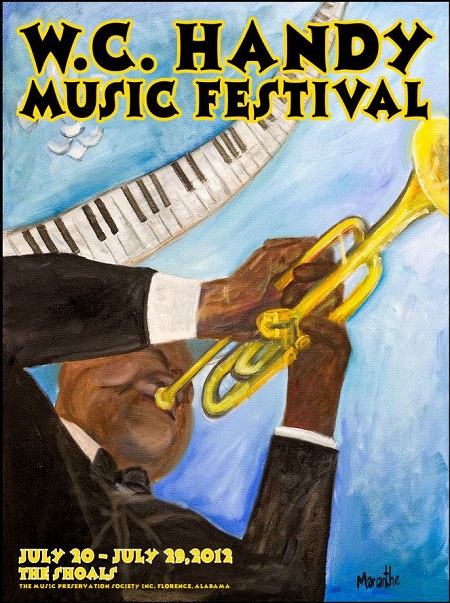 I was touched emotionally when I saw a documentary about Jimmy Lee Sudduth a blues singer who was also an artist, who was so poor he painted with mud. Not having money or even paint, still could not hinder him from creating art from the inspiration he had. Proof that art is not just for rich people. Lois Wilson was a folk artist who was also in the documentary “Treasures” and went back to the basics of where her inspirations came from. The documentary was very poignant to me personally.

Where would you really wanna go with a time machine and what memorabilia (records, books) would you put in?

I struggle with this question, because I love the present and can have all the music from the past with me here. If I have to choose, I might choose the roaring twenties after WWI, they seemed happy, with great music and a lot of dancing. (Before the great depression)

How you would spend a day with Elvis?

What would you say to Wynton Marsalis?

I once met Wynton Marsalis on a plane. I was upgraded to first class and sat in the seat next to him. I was so young and naive; I did not realize who he was, until after we met. We had a delightful conversation all the way back from Niece, France to the United States.  If I had a chance to talk to him again, I would ask more about his music and the legacy he has created in Jazz and music, instead of talking about the food served on the plane.

Where to begin, so many things I would like to ask him, but I think one thing I know I would ask, would be when did he first recognize and know he was born to create music?