"Blues music speaks to all people of all languages."

John Crampton: Talking With The Blues

John Crampton is the UK’s top slide guitarist and a powerful and dynamic solo blues and bluegrass musician. This is a solo artist who sounds like a full band! For years he has toured the world playing National Steel guitar with his own compositions and classic blues, rock and bluegrass numbers to delight all audiences.

Born in London, John taught himself steel slide guitar, banjo and harmonica. Influenced by Howlin' Wolf, John Lee Hooker, Bukka White, John Hammond, Mississippi Fred McDowell he is now an inspiration himself to many in his wake. 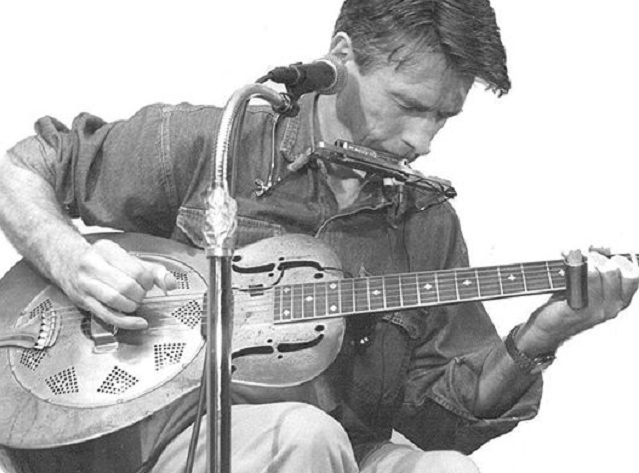 "I would like to go back to 1955 when John Lee Hooker, Howlin Wolf and Muddy waters were at their peak. Also jazz players like John Coltrane, Miles Davis and Dizzy Gillespie were at their best."

A one man blues explosion, John plays slide or bottleneck style on a 1930s National steel guitar. Add a stomp box and harmonica and voice like an angry chainsaw and you get a runaway train of 4/4 rhythms straight from Mississippi. He has recently played in Italy, Spain, Sweden, San Francisco, Tasmania, New Zealand, Greece, Florida, France, Germany, Ireland, Canada, Slovakia, Switzerland, Poland, Norway, Czech, and Belgium at festivals, venues and all kinds of events. John Crampton will be in Athens, July 22 at BLUES FESTIVAL 2014 (Stage Volume 1).

I learnt from playing music that I just want to play hypnotic rhythms. Playing music is just a way to express extreme emotions.

How do you describe John Crampton sound and songbook? What characterize your music philosophy?

I play very fast with great intensity and energy. It is almost like a physical workout. I try to make the rhythms hypnotic and mesmerizing. 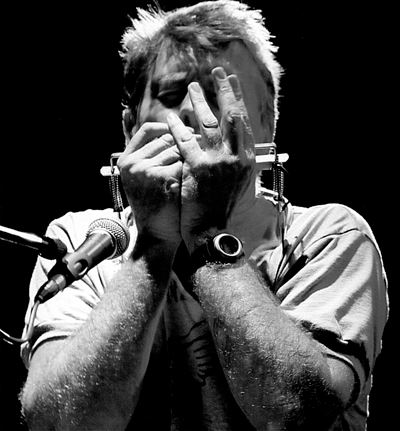 Blues music speaks to all people of all languages.

"I learnt from playing music that I just want to play hypnotic rhythms. Playing music is just a way to express extreme emotions."

What are some of the most memorable gigs and jams? Are there any memories which you’d like to share?

I always play solo. I never jam with other people. One of the most memorable gigs was when I was booked to play at a big festival at Lucerne in Switzerland. I missed the flight in London on Easyjet. I was told to drive 100 miles to catch a later flight at Luton airport. The flight at Luton was delayed. I rang the festival to say I might miss the concert. I arrived in Switzerland and was driven at high speed to the Lucerne Blues Festival. The driver dropped me by the side of the stage and I played immediately. The audience loved what I played and I sold 200 CD’s. I stayed in a huge hotel where Led Zeppelin stayed.

I was playing my first blues festival in Germany and I met an American blues harmonica player called Rock. He made me realize that I could play my music all over the world.

The best advice given to me was stop tuning my guitar and play the blues...

You are also known as one-man show. What are the secrets of harmonica, stomp box, resonator and slide?

I play slide guitar on an open chord of D or G. This creates a very big sound. I play finger picking guitar style so sometimes it sounds like 2 or 3 people playing. The harmonic is played in a very rhythmic style to compliment and emphasize the rhythm. The stomp box creates a bass drum sound in the background to fill out the botton end like a bass guitar. 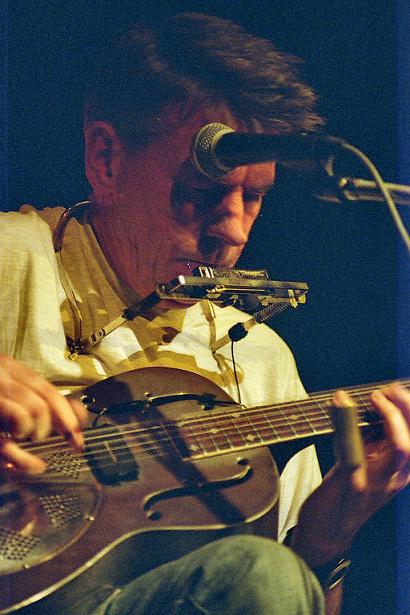 What's been your experience travelling around the world? Do you found any interesting blues societies?

Yes I played in Tasmania in Australia and New Zealand and was very surprised how many blues clubs and blues societies there were. These blues clubs and societies are usually organized by one man who loves music.

"I play very fast with great intensity and energy. It is almost like a physical workout. I try to make the rhythms hypnotic and mesmerizing."

I don’t miss anything from the past. I have no hopes and fears for the future of music. Music will always survive.

I would like to go back to 1955 when John Lee Hooker, Howlin Wolf and Muddy waters were at their peak. Also jazz players like John Coltrane, Miles Davis and Dizzy Gillespie were at their best.