"It’s almost like an affliction, but a GOOD affliction, because the Blues is about life, and having your eyes and your ears open, and that poor thing that’s in between them..."

Tad Walters is a young and soulful North Carolina guitarist, bassist, harp player, and vocalist who spent a long time jamming with urban bluesman Bob Margolin before putting his own band together in Raleigh. Born in Canton, Ohio, and raised in Raleigh, North Carolina, Tad Walters began playing the guitar at age 12. As he was developing his guitar skill, Tad picked up the harmonica a couple years later at fourteen. He was influenced by the likes of Blind Boy Fuller, Robert Lockwood, Charlie Patton, Robert Nighthawk, and John Jackson, among others, and began his professional music career with the Bob Margolin Band in 1996. 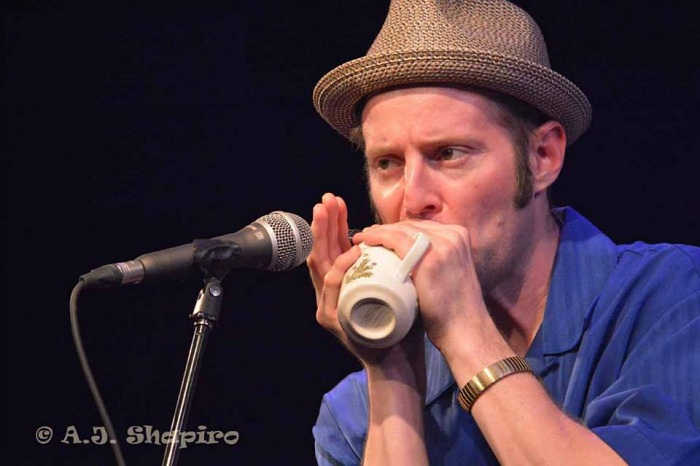 "In other parts of the world, this music is like a foreign delicacy. People have their own musical traditions, and maybe the Blues sounds funny or interesting to them." (Photo by A.J. Shapiro)

In that four year period he traveled the world with the band and played with musicians like Pinetop Perkins, Hubert Sumlin, Billy Boy Arnold, Cary Bell, Dave Myers, John Jackson, John D Holeman, Willie Smith and many others. In 2001, Tad joined the Big Bill Morganfield band and stayed until 2004. Tad is now teaching guitar and harmonica lessons and concentrating on Piedmont blues and old-time jazz with Dave Andrews.

Tad is quite adept at all of the different "styles" of blues, and takes great pride in his own songs, such as "Cold Blooded Murder", and "Break 'Em on Down". Tad leads his own band, and also plays by himself. Tad talks about the blues, harmonica, Robert Lockwood Jr, Bob Margolin, John Jackson, Pinetop Perkins and Vietnam's war.

Well, when I was a kid, the sound, and the feeling of the Blues fit me.  It just fit me as a person. I didn’t know why back then, and I still don’t. It’s almost like an affliction, but a GOOD affliction, because the Blues is about life, and having your eyes and your ears open, and that poor thing that’s in between them….

How do you describe Tad Walters sound and what characterize your music philosophy?

Both my sound, and philosophy is very simple. Then again, it’s not.  Sorry, no easy answers! For myself, I just go by what I feel like playing at the time. I have spent years learning all about music, and all kinds of music. There are some certain “tricks” you can use when you play or write. I might go through something in my life, and BAM!....all of a sudden, something rhymes. All of a sudden, a melody might pop in my head. I attribute that to God giving me something. I am very thankful for all of that! 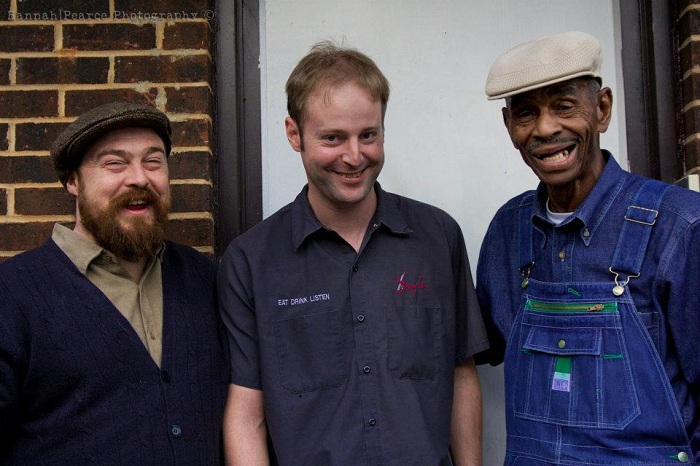 "I like the folks I play with. We make try to make music that sounds good to people." (John D. Holeman, Tad Walters and Bullfrog Willard McGhee - Photo by Hannah Pearce)

In other parts of the world, this music is like a foreign delicacy. People have their own musical traditions, and maybe the Blues sounds funny or interesting to them. How do these notes sound so good, and how do they make it work?? Why can’t I stop my foot from tapping, and why do all the women go crazy when you do it right?? Short answer: Women. hehe

I’ve played with so many great musicians, that is question is impossible to answer. When people are comfortable, they play their best. If I named  anybody, I would go back, and forget about somebody, and that would make me feel terrible. I like the folks I play with. We make try to make music that sounds good to people.

That’s easy. Robert Lockwood Jr… He was my favorite guitar player since I was a kid, and he still is at this minute! I was very lucky to be able to have known that dude. The only human being that ever inspired fear in me.  Just my dumb ass trying to impress him. I learned Jazz from Robert Jr… That guy is the foundation of everything I try to play on a guitar, and everything I know about music.

Are there any memories from Bob Margolin and Pinetop Perkins which you’d like to share with us? 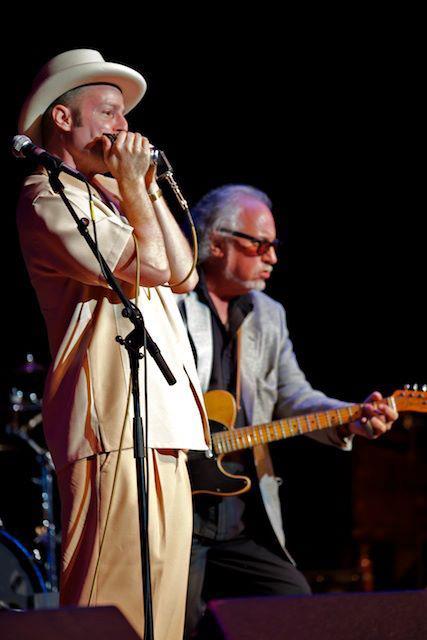 So many funny stories!  All I can say is, Pinetop is still an inspiration to poor me. He smiled at everybody, and made them his friend. I learned a lot from that Old Fart!

Truly, I miss the older folks, that I was blessed to meet. They had wisdom, and also knew what the music should sound like. I was very lucky! There is a tradition in this music, and I really hope it can be carried on correctly. It tends to get “watered down” with each generation, but what can you do? Feel that stuff in your bones, and even pray on it. It won’t go away, because it’s just too mean to die.

I can’t change anything; I just try to play along with it...

John Jackson was one of the first people to make me feel good about myself trying to play music. He would send me Christmas cards every year, and he always loved me. I think about him all the time!

Hubert!!! It doesn’t matter which guitar he has in his hand, it always sounds like Hubert! You make the sound with your hands. If you happen to hit a note that ain’t quite right, bend it until it is, and then OWN it! I miss Hubert very much too.

I still talk to Billy Arnold on the phone. We send each other CD’s of what we have been doing. I wish I had recordings of some of our conversations; there is so much musical history in there. Once again, I am very lucky. 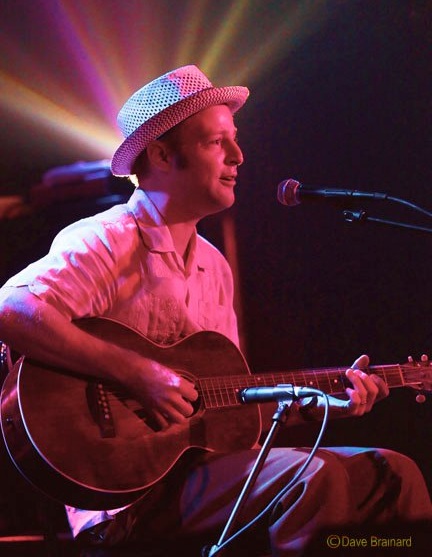 I laugh at the silly trends in Music. I laugh, so I can keep from crying.

"I miss the older folks, that I was blessed to meet. They had wisdom, and also knew what the music should sound like." (Photo by Dave Brainard)

What are the differences between a blues guitarist and a harmonica player? What do you prefer?

Most of the time, a guitar player has another job, and is a more stable person. Usually, he has a good head on his shoulders. Why somebody picks up a harmonica to make music is beyond me. The harmonica is the most God-Awful sounding instrument in history. BUT, if you can make the damn thing sound good, maybe you won’t go straight to Hell when you die. Why not learn both?

Time Machine? I would visit my Dad in Vietnam. Also, I would play with Muddy Waters. I think we have about the same idea about music.