"The Blues is all about Truth. Believing in yourself and playing music from the heart is the soul of The Blues."

Blacktop Deluxe formed in March 2013 when ex Devils Creek Bassist Tim Chapple and Drummer Alan Ibbotson joined forces with Guitarist and Vocalist Keith Howe, well known for his work in his last Band Blue on Black. This new British, Blues Rock / Hard Rock Trio released a 5 Track EP ‘Dark Horses’ within their first 2 months together to wide acclaim. The EP showcased their very own ‘Signature Brand’ of Guitar driven, ‘Power House’ Rockin’ Blues with original songs ranging from the Bluesy ‘Money in my pocket’ through to the Rocky ‘Puttin Out Fire’ via the atmospheric ‘slide’ number ‘The Wine. Having already shared stages with Larry Miller, Virgil & The Accelerators, Martin Barre, Focus & Walter Trout to name a few, their eagerly awaited debut 11 Track CD is scheduled for a Spring 2014 release. Their influences are many and varied, Joe Bonamassa, Walter Trout and Rory Gallagher to name a few, but pulling in the best of Rock and Blues from its seminal beginning right up to tomorrow. Their live performances have already been compared to many of their hero’s including Cream, Hendrix, Led Zeppelin, Taste & Johnny Winter) and a recent review described their music as “Take some early ZZ Top (before they became commercial), add in some Sizzlin' Slide Guitar, Mix in some Dire Straits (but with a more modern edge to it) and you'll start to get an idea of their unique and irresistible Blues/Rock sound". Although early days, the Bands original material is standing alongside the best of the best and regularly gains airplay worldwide.

Keith: To me The Blues is all about Truth. Believing in yourself and playing music from the heart is the soul of The Blues. When you reach inside of yourself and say ‘this is me’ that’s when The Blues comes out.

Alan: I never wanted to be in a blues band, then I met Keith. I learnt that good blues wasn't just about sad old ballads, about being poor and depressed, but about passion and life's stories. Now it means making my drums shout that story.

Tim: I’ve been playing in bands since I was 16, a long time ago – The Blues has taught me that you have to play with your heart, and don’t waste a second – play every gig as if it was your last. The Blues is all about emotion – happy or sad – The Blues is Life.

How do you describe Blacktop Deluxe sound and what characterize band’s philosophy? 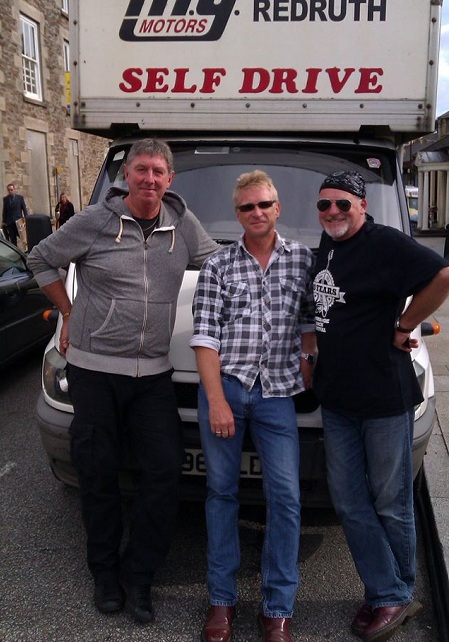 Keith: Blues with a Passion. We all play from the heart and the great thing about this Band is we're not precious in any way, so creating ‘our blues’ is always a very positive experience.

"Blues in the UK is great. That's because people are open minded to new stuff."

What is the story behind the name of band?

Alan: We got together for a jam one afternoon.  Within 20 seconds we knew this band was going to be great; it was like driving a very powerful car that just wanted to race on the open road. We felt our combined experience meant we could handle it with a touch of class; Blacktop for the highway; Deluxe for the style!

Are there any memories from gigs, jams and open acts which you’d like to share with us?

Keith: Tavistock Wharf, 7th November 2013, opening for Walter Trout. It was a poignant evening for me as I've known Walter quite well for some time now (he's signed my Strat previously and I've been lucky enough to open and jam with him quite a few times before).  I knew he was quite ill and was unsure quite what to expect. A big crowd had turned out to see Walter return to The Wharf and we were very fortunate to get a wonderful reaction from them too. This was so nice for me as The Band was only a few months old by then and we were still wearing in our material. Then I saw Walter, who was obviously struggling health wise; perform a wonderful evening with some 'stand out' solos before joining him on stage for a jam. Afterwards we had some time together, chatting in the dressing room and trading 'medical' stories and a few tears, before he had to go.

A great night spent with a great Man, he's always in my thoughts and we all wish him well, can’t wait to play alongside him again.

Alan: Yes. A few years back Keith and I were in another band and we played support for some guy from out of town who went by the name of Joe Bonnamassa.  We had a few laughs with him backstage and he seemed pretty good- I wonder if he ever did any good?

Tim: Opening for Walter Trout recently was a fantastic experience, and travelling across Germany to play back in 2011 was something I will always remember – I’ve been very fortunate to work with some great musicians over the years. 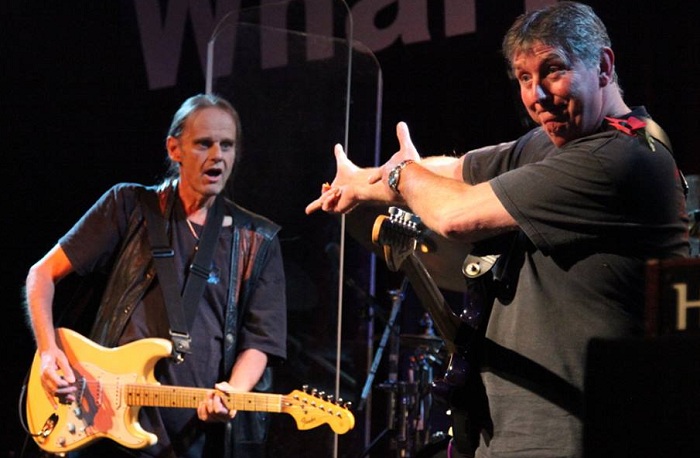 "The UK Blues scene is very healthy at the moment with lots of great young talent looking back and trading on the roots of 60’s Brit’ Blues." (Photo: Keith Howe & Walter Trout)

From the musical point of view what are the differences between: Blacktop Deluxe and Blue on Black & Devils Creek?

Tim: I very much enjoyed my time with The Creek – both bands share the same influences and references – I think we are working hard now in Blacktop Deluxe to develop and strengthen our song writing and performances – the song itself is the important bit – to have the crowd singing along to something we’ve written as a band is a great feeling, and I’m really proud of the new album, and the positive reaction it is getting.

Keith: Artist Originality. So many of the artists I listen too are playing the same songs but with different words and solo’s. You really could be listening to one of many artists!  When I listen to Howlin Wolf or Johnny Shines, or Jimmy Reed or Muddy Waters or Little Walter (how much longer could we go on?) what cuts it for me, is they are all putting THEIR stamp on the Blues, expanding it and not consigning it to a Museum.

Alan: I miss nothing. I'm a drummer; the blues of the past didn't have drum kits so that's no good at all for me! My hopes for the future are that Blacktop Deluxe songs get played more and more, because they are varied and suit different moods of the listener.  My fears would be if Blues goes back to those sad old broken guitar days!

Tim: I miss the integrity and danger of the old blues artists – today’s blues can be very watered down, safe and middle class – it needs to have the edge and passion to survive – you don’t need to be a great musician – you just gotta love it and play hard!. Too many of today’s blues musicians know all the music theory, have all the best gear, but still manage to over play and have no passion or identity. 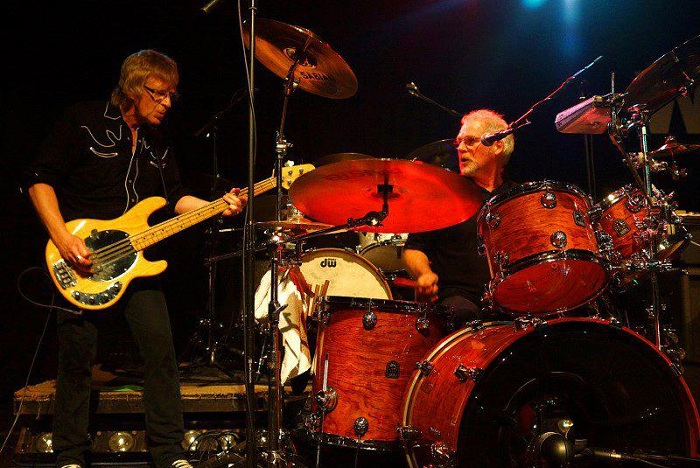 "We felt our combined experience meant we could handle it with a touch of class; Blacktop for the highway; Deluxe for the style!" (Photo: Tim Chapple and Drummer Alan Ibbotson)

Keith: A ban on instant musical celebrities and manufactured talent.  We come across so many great Bands and Musicians on our travels that struggle to get their own music heard whilst other acts who perform lack luster covers for example, but look good for the camera and are easy to market, get the labels and deals and ‘instant fame’.

Alan: Stop having those awful TV 'talent' shows that make people think you can be a star overnight without putting in any effort. You know- the ones where amazing musicians get beaten by a performing dog!

Tim: Bring people away from their televisions and computers and get them to gigs! – keep music live!

Make an account of the case of the blues in UK. What are the lines that connect the legacy of British Blues of 60s with the today’s scene and generation?

Keith: The UK Blues scene is very healthy at the moment with lots of great young talent looking back and trading on the roots of 60’s Brit’ Blues. As a child of the 60’s I grew up listening and seeing some of the greatest British Blues Artists ever and I feel very proud to have been a witness to those who  ‘took it back to its American roots’.

Alan: Good question…Blues in the UK is great. That's because people are open minded to new stuff. We have done support gigs to the mighty Walter Trout- he remembers his roots and now he gets Keith to come and jam with him in the middle of his set! This is a great example of both the UK and the American blues legacy!

Tim: We were raised on Clapton, Mayall, Kossoff - it comes out when we play!. Every album and every show I’ve heard or seen has influenced what I do today. Keith: The latest ‘rally round’ for Walter Trout has been so touching with benefit concerts arranged all over the globe in an attempt to help Walter & Marie cope with his illness and the need for a liver transplant.

From the depths of despair, the reality of a future has now arisen for Walter. Good luck Buddy, everybody is rooting for you.

Alan: My nephew is also a musician who writes songs. He had been away but decided we should do more family stuff. He came to me and said "Hey-how about we record one of my songs?". We had a great time. The result is on You Tube; Otto featuring Blacktop Deluxe; its called Northbound Man.

Tim: We did a fund raiser for Leukemia recently – seeing lots of musicians and music fans all together, and working for a wonderful cause was a great feeling – a feeling of togetherness.

Keith: The long weekend of 26th – 30th August 1970 would take me back to the Isle of Wight Festival which I originally attended (aged 17) and was lucky enough to see and hear so many amazing acts. Including (from memory) The Groundhogs, Taste, Cactus, Tony Joe White, Joni Mitchell, Miles Davis, Ten Years After, ELP, the Doors, The Who, Sly & The Family Stone, Free, Jethro Tull, Leonard Cohen, Richie Havens and of course Jimi Hendrix. Now that was a cool line up.

Alan: Wow that's great- I would go with you a couple of years into the future to a Blacktop Deluxe gig in a big arena near you! We could then remember this interview again and talk about the old times! Thank you.

Tim: January 1974 – Rory Gallagher’s Irish Tour. One of the best live albums ever recorded – I’d love to have been there to witness it. 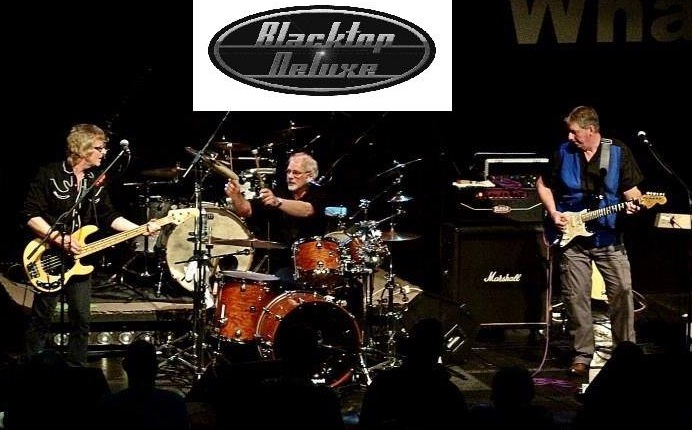