"I think because good blues is really uplifting, you can depend on it to make you feel better...and there are so many great characters in the blues, it’s just entertaining on so many levels."

Robert Welsh: Blues in Many Levels

Bob Welsh currently play guitar with Elvin Bishop. He's from Louisiana, but California is his home now. Some of the cats he had the pleasure to play with are: John Nemeth, Rusty Zinn, Roy Gaines, Jackie Payne, Mark Hummel, Kim Wilson, James Cotton, Snooky Pryor, James Harman, Billy Boy Arnold, Charlie Musselwhite, and a whole bunch of other talented musicians. He lives in the Bay Area and helps operate Greaseland Studios, along with Kid Andersen & Hans Bosse. 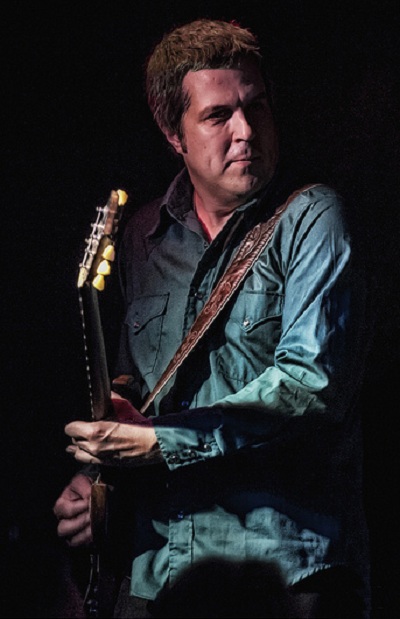 Bob Welsh has covered a lot of ground to get to his current gig and it hasn’t all been as a guitar player. The multi-talented Welsh is also a whiz on the keyboards. Robert Welsh was born in California, but moved to Louisiana when he was 7. He actually moved back to New Orleans when he was 21 for a year or so, on a mission to absorb the music there. He never took any formal lessons at first, but started playing guitar at around 14, and was learning how to play bass, too. He first heard John Lee Hooker's Boom Boom, and that was it for him. Bob never heard anything like it and flipped out. As far as everything else, he have very eclectic taste as suppose most musicians do, but Bob was raised on ‘50s and ‘60s rock ‘n’ roll from his parents, and heard a lot of boogie woogie piano playing from his grandmother, so that pretty much shaped her interests in music at an early age. Later, meeting Rusty Zinn was also a turning point in young Bob’s career. When met Rusty Zinn was blown away 'cause he was playing guitar like the backing musicians on those Little Walter records, and that is what he wanted to play. The Blues has allowed Bob to hang with some of the greats in the business and it’s far from over. Bob talks about his routes in the levels of music with the Blues as a guide.

I've learned from the blues that conviction is everything, and playing flashy is really nothing special. The blues to me is just a feeling, and something that should be felt throughout your performance: its way more important to play with feeling even if you hit a wrong note here and there than to play perfectly without any feeling.

How do you describe Robert Welsh sound and progress, what characterize your music philosophy?

Well, I always will stick to the blues in my playing and attack, and I'm always trying to refine and minimalize that sound...to get as much as I can with as few as notes possible. I still listen to my musical heroes, and try to get a feel on what makes them such great players, and I love jazz and country, rock and roll & reggae as much as anything cause it’s all pretty much blues anyway. "The blues to me is just a feeling, and something that should be felt throughout your performance: its way more important to play with feeling even if you hit a wrong note here and there than to play perfectly without any feeling." (Photo © by Bob Hakins)

I think because good blues is really uplifting, you can depend on it to make you feel better....and there are so many great characters in the blues, it’s just entertaining on so many levels.

I think the best jam I was ever in was when I was in The Rusty Zinn Band and we had just finished The San Francisco Blues Festival, and were playing at a niteclub with Pinetop Perkins, Carey Bell & Taildragger....just really great Chicago Blues. I've been very fortunate to play a lot of great places, but one place that stands was The Fuji Rock Festival in Japan....huge crowd and great artists like Buddy Guy & Toots and The Maytals.

I think the most important meetings have been playing & recording with Elvin Bishop. I've learned a lot about playing live & recording in the studio with him, more so than any other musician. The best advice ever given to me was from June Core, Charlie Musselwhite's drummer. He told me 20 years ago when I was first starting out: "always smile through your mistakes". In other words, relax and don't worry if you hit a bad note or are uninspired, just play it all out. 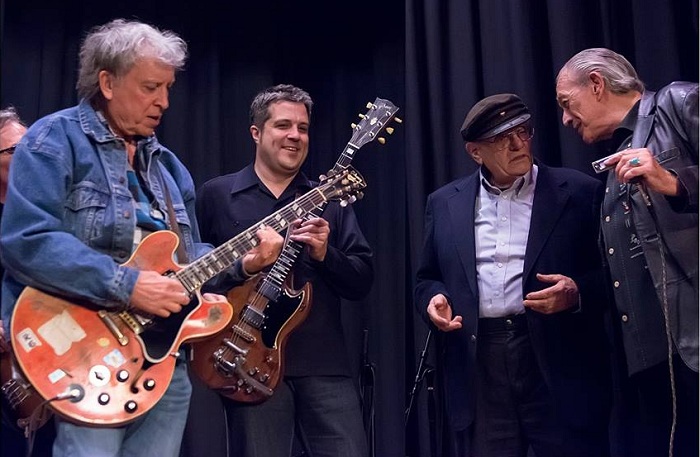 "I would have to go back to one of those American Folk Fesitvals, which year would be the hardest...maybe July 66, where I could see Son House, Howlin Wolf, Chuck Berry, The Dixie Hummingbirds & Skip James!" (Bob with Nick Gravenites, Charlie Musselwhite & Elvin Bishop - Photo © by Bob Hakins)

What I really miss, even though I'm from a later generation, is that you had a lot of options for live entertainment. On any weekend in the 80s, I could go see Albert King, Junior Wells, Albert Collins, and whoever was coming through town. There were a lot of the original guard left, but there were also so many places to play and see live entertainment....and young people went to these shows! I guess I just miss that the younger generation doesn't seem to be involved so much in traditional roots music, but I hope they discover it soon!

What are the lines that connect the legacy of Blues with Soul and continue to Rock and Reggae music?

It’s really Gospel that connects everything: the singing, music and songwriting. As far as Reggae, we can thank the blues piano player Roscoe Gordon. When Jamaica would tune into American radio, they got WWOZ from New Orleans & the basis of Ska/ Reggae comes from this. Soul & Rock are really close to the blues, there just a few steps away.

Well, any time Rusty Zinn or Kim Wilson calls me for a gig, I'm smiling! They always have a great band, and, they're so great. The first time I played with James Cotton he pulled me aside and said: "Piano player, you take me back to Otis Spann"...well, I was flattered cause I guess I'd done my homework! Snooky Pryor had so much energy, he was almost like Howlin Wolf the way he'd loom over the stage or scream into his harmonica mic...he was electrifying. "I still listen to my musical heroes, and try to get a feel on what makes them such great players, and I love jazz and country, rock and roll & reggae as much as anything cause it’s all pretty much blues anyway." (Bob Welsh & Elvin Bishop - Photo © by Bob Hakins)

Are there any memories from Elvin Bishop and Charlie Musselwhite which you’d like to share with us?

You know, I've had the opportunity to accompany them on separate duo gigs, and this weekend I get to play behind both of them! Its hasn't happened yet, but I'm sure it will be memorable.

Really it would be that an artist can make a living off record sales! The industry is so changes now, there really aren't any record labels anymore...I wish that people still wanted physical records & cds', instead of downloading them.

What has made you laugh lately and what touched (emotionally) you from the Greaseland Studios?

Recently, I've done a great recording with a fantastic soul singer from Georgia, Willie Walker. Just playing with him, Jim Pugh, Rusty Zinn & Kid Andersen on this kind of material was a great experience; it felt like we were making a Muscle Shoals record or something! And Rick Estrin produced it, so we were doing a lot of cool songs. Believe me, all the folks I just mentioned are comedians in their own right, so there was a ton of laughing going on the whole time!

I would have to go back to one of those American Folk Fesitvals, which year would be the hardest...maybe July 66, where I could see Son House, Howlin Wolf, Chuck Berry, The Dixie Hummingbirds & Skip James!