Interview with drummer/singer/songwriter J. Hansen - one of the top Blues and Roots drummers in the US

"Blues and jazz will always be around because both styles are too human to overlook for long. As long as people laugh and cry, there will be the blues."

Drummer, singer and songwriter J. Hansen is one of the top Blues and Roots drummers in the United States. Hansen has spent the last decade touring and recording with premiere jump blues masters Rick Estrin and the Nightcats. His drumming combines the techniques of master vintage drummers like Gene Krupa and Buddy Rich with the grooves, sound and flash of today. Hansen’s drumming has taken him to all 50 U.S. states as well as over 30 countries internationally, and has put him on stage with many great artists, including: Buddy Guy, Little Charlie, Taj Mahal, Elvin Bishop, Kim Wilson, Charlie Musselwhite, Jimmie Vaughan, Tommy Castro, Janiva Magness, Curtis Salgado and others. He was born in Joliet, IL and discovered his love of the drums at the age of four after seeing a TV commercial for a late 70’s KISS album. Drumming became an instant obsession with Hansen, and he began to practice and play in the school band. In the mid 80’s Hansen moved to California and continued his musical education. At the age of 13, J. Hansen played his first gig, with Clint Baker’s New Orleans Jazz Band. While in college, J. Hansen started playing in local blues bands. It became apparent to Hansen that blues was the common musical thread throughout all the different styles he liked, from rock to jazz to funk and R&B. He started his own funk/R&B band, Verso, in 1996 and began to write songs for the group and sing lead vocals. Verso performed throughout the Bay Area, releasing a CD in 1997, “Attacking Metropolis”. In 1999 Hansen toured and recorded a CD with the longtime banjo player of the Preservation Hall Jazz Band, 90 year old Narvin Kimball.

In 2002, J got what his friend Charles Wheal referred to as “THE call” from Rick Estrin, frontman for the legendary jump blues band Little Charlie and the Nightcats. He joined the band in 2002 and after more than a decade as a Nightcat. In 2009, Hansen released his first solo CD, “Give the Drummer Some”, which features his original songs.  J is currently at work on his next CD of original material.

To me, the blues is just real life. Life is great and life is hard, and the blues reflects all of it.

How do you describe J. Hansen sound and progress, what characterize your music philosophy?

I like to borrow elements of my sound from past musicians, but not copy anyone too much. I want to recognize the great drummers of the past by taking things from each of them, but I try to make it my own style.

Because it is real and from the soul, not like so much of the processed, shit music that is out there today. Also, blues usually tells a story-and everyone has a story to tell. 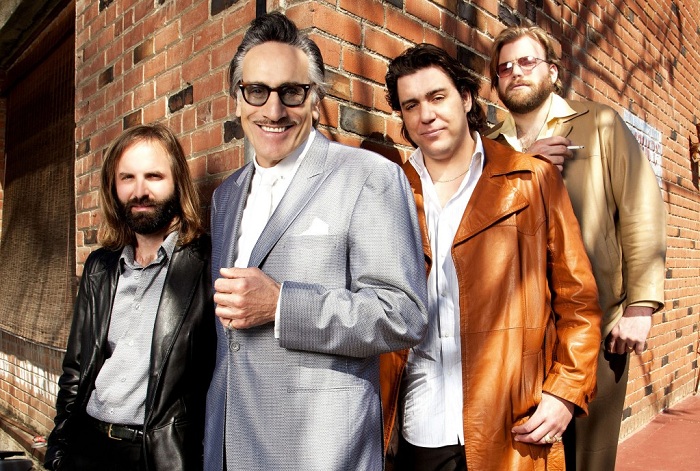 "I like my blues with a bit of jazzy feeling and rhythm, and to me, if jazz doesn’t have a good amount of blues in it, it ain’t real jazz. Also, rock without blues in it is missing the point." (Photo: J. Hanson with Rick Estrin & The Nightcats)

Best jam: benefit concert for Curtis Salgado. I was on stage playing with Rick Estrin and Little Charlie, Charlie Musselwhite, Jimmie Vaughn, Robert Cray, Kim Wilson all at once!!

Best Gig: Probably a big basketball arena in Moscow. I could see myself singing on the giant jumbo screen and there were soldiers with machine guns around the front of the stage-exciting!!

Best advice: (from my mother): You can be anything you want to be, and don’t let anyone tell you can’t.

Once while playing a show with Narvin he stopped the band in mid-song. Then he told the audience, “these boys are all playing great but they don’t need to play so LOUD. It was humiliating, but he made his point. And he was right. 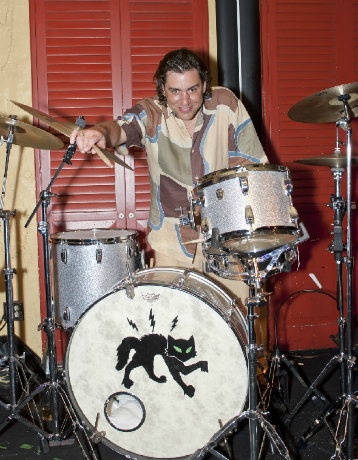 I miss guitar solos in today’s music. And horn solos. All the music I like has some sort of solo, and today’s music has almost none. I think mainly because the music itself doesn’t say much- so what can a soloist do? I also miss dynamics in music, especially the way CDs sound now- no subtlety and feeling, just loud.

Blues and jazz will always be around because both styles are too human to overlook for long. As long as people laugh and cry, there will be the blues. I hope someone comes along soon (like Stevie Ray Vaughn) who can take the music to the masses and bring it out of the shadows again. That is my hope. I don’t fear much.

Which memories from Buddy Guy and Jimmie Vaughan makes you smile?

I was playing with Little Charlie and the Nightcats at Buddy Guy’s Legends in Chicago. All of a sudden this guy jumps up on stage during a slow blues and starts singing. At first we thought, who the fuck is this asshole? Then he started to sing and we realized it was Buddy Guy. He had just cut his famous Jeri-Curl hairdo and we didn’t recognize him at first. Of course when we heard that voice, we knew.  I wish someone would have taken a picture!

Also, after jamming with Jimmie Vaughn and others at the Salgado benefit, he came up to me backstage, offered his hand and said, “Hi-I’m Jimmy.  It was nice playing with you.” He didn’t have to say that or talk to me at all, but he is truly a nice man. Most big stars wouldn’t give a side man like me the time of day, but not him. Jimmie Vaughn is a class act.

What are the lines that connect the legacy of Blues with Soul, Rock and continue to Jazz and Dixieland?

To me, Blues and Jazz grew up together in America. It took a lot longer for the white audience to appreciate the Blues, whereas they picked up on jazz right away. I like my blues with a bit of jazzy feeling and rhythm, and to me, if jazz doesn’t have a good amount of blues in it, it ain’t real jazz. Also, rock without blues in it is missing the point.  A band like Rush, while certainly accomplished musicians, has no blues in their rock- and I have no use for that shit. 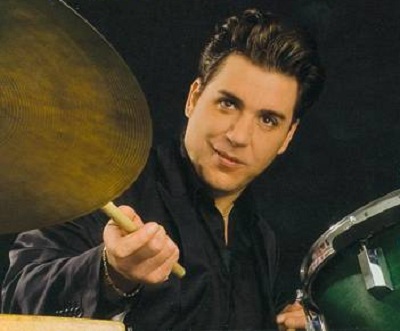 I’d let the world know that the drummer is the most important part of the band- not the singer or guitar player. Without a good drummer, them other guys would just be pissing in the wind.

"To me, the blues is just real life. Life is great and life is hard, and the blues reflects all of it."

I’d love to go to New Orleans in the 1920’s and hear Louis Armstrong playing with the King Oliver band and hear jazz being born. I also would love to go back to Maxwell Street in Chicago in the early 1950’s and hear Muddy and Little Walter jamming in the street.