Interview with French one-man band Magic Buck - his music are full with energy, emotion and happiness

"Because it's (Blues) about something essential we all have in common! Born in the African American community in a past period, but today a universal music that touches everyone who knows how to listen…"

Magic Buck: One Man & His Blues

Magic Buck was born in 1965, in Paris area, France, later moved down to the south, in Toulon, where he graduated in Rock 'n' Roll local scene from 1983 to 1996. Magic Buck improved his mind with pre-war Blues masters like Son House, Charley Patton and Robert Johnson, and also Muddy Waters, Howlin' Wolf and John Lee Hooker, pioneers of up-north urban period later in the 1950's. From first ones, he got his deep love for acoustic solo performing and from second ones, the tremendous energy coming from amplified bands which accompanied them.

A real initiation journey, band after band, way back into history of American music, led him naturally back to the roots of the Blues. Makin' his decision to go further alone in 1997, he became more and more permeated with Folk-Blues, because of its artistic honesty and pureness, far beyond commercial music criteria, until he could not express himself another way. He finally got totally committed into Blues music. Some people say Magic Buck's got the Blues in him. 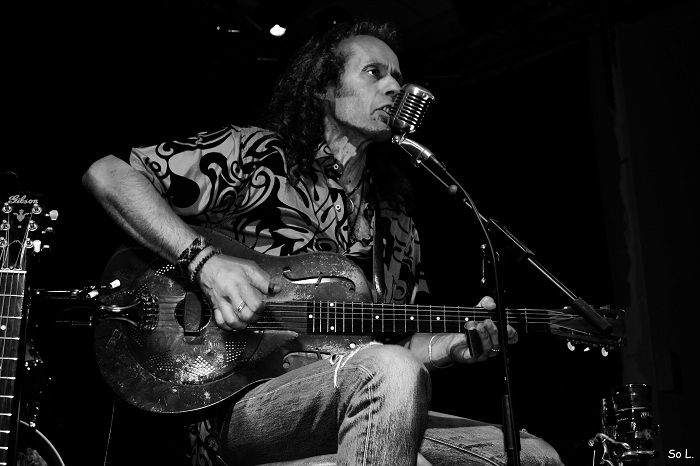 Love for people bounds Buck to sing and play, and with people he shares his music. This engaging, poetic and mystic artist likes to take the audience with him under a cocoon during the show. Three albums and a few years of a life dedicated to playing his music and paying his dues forged the lonely bluesman's style with a very own autobiographical repertoire, within everybody can identify, as it originally was meant to be.

Thankful is the returning album in 2008, after a long hard days period, a truly life disruption necessary and (re)constructive. More present than ever, the musician family man lives now intensely from day to day. Love & Light, released in 2011, shows us the new man Magic Buck became after all these years and adds a new sensibility to this story he tells us every night. Not totally a "One-Man-Band" but not so far, he's as comfortable performin' on both small and big stage. Hittin' blues, shuffle, boogie or ballad, on 6 or 12 string guitar, slidin' on his old National, blowin' life through his harps, the bluesman takes us with passion into his adventure, which is also ours. Three words to resume an evening with Magic Buck : energy, emotion and happiness.

Good question. Let me first say that, as I come from Rock Music, Blues has always been a kind of a goal to me. I write and sing my own blues and they're most of all about what I know the most, I mean life and feelings from my very point of view. My songs tell stories I'm deeply involved in, so since 1994 when I fell in love with it, this music has always been a great help for me to stay alive, well and sound in mind.

How do you describe Magic Buck sound and progress, what characterize your music philosophy?

I play Acoustic Blues, both influenced by pre-war Country Blues and later urban Chicago Blues. Some people say I'm a one-man-band, because of the solo act and the percussion kit on my stool, but I don't consider myself as one. I think I'm just a solo blues songwriter and performer. I love musical simplicity and honesty, far from commercialism, what I think acoustic music styles are about, and Blues Music the deepest of all of them! 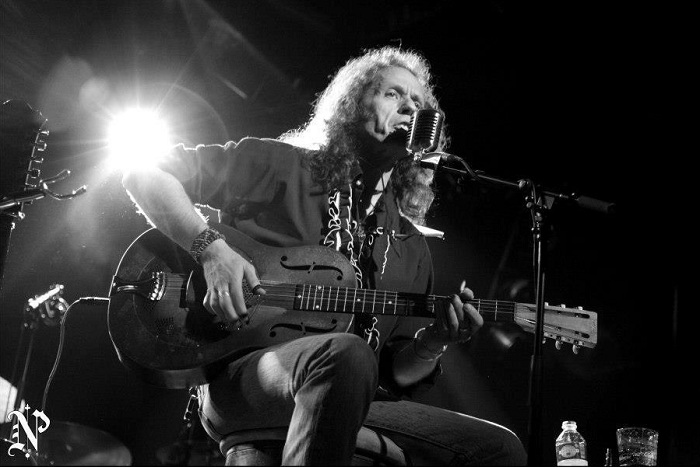 Women, Children… and Disease! Most of my songs are about my own life experiment…

I made three albums, and there is a progression all along of them. There's a main story growing up, in events I relate and mostly the way I do it. 10 years after the first CD, as I was preparing the second one, I had this brain tumour, and all my life turned upside down. I lost total ability to play my guitar and making this second album was my way to remission. I had to re-learn how to play every one of my songs, spent 18 months recording them, during the chemotherapy treatment. When it was over, I found myself changed and healed… I named the album "Thankful" because I wanted to thank disease that made me move like I never did before! Third album "Love & Light" came three years later to confirm I had become a new man. It was a new kind of album, with three guests, friends I met during this new period of my life when I got back to business. I invited them to play some duets…

Because it's about something essential we all have in common! Born in the African American community in a past period, but today a universal music that touches everyone who knows how to listen… And maybe a goal for many other musicians too, in search of authenticity… 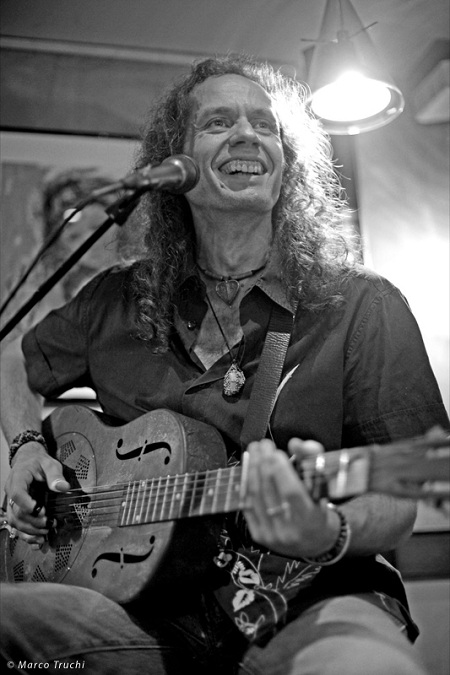 My most memorable gig was the "Love & Light Night", a special evening around my last album with my friends and guests Mike Greene, Manuto and Tony Zombi all on stage with me. A real big concert, full of emotion, with a wonderful audience!

I had so many jams! But don't expect me to give famous names. Anyway I'm not a wild jammer. I don't like to impose and, I know it can seem odd to you, it's hard for me to play only one of my instruments if I don’t do the complete (guitar, harmonica, boots). Of course I love to join friends and bands for a couple of tunes but I never feel as good as when I do my own stuff.

First guy I saw alone live on stage was Hans Olson from Arizona. I had a band at the time (we played only Chicago Blues covers) and he made me realize it was the purest way to play the Blues. Then came Corey Harris I met during a tour in France, we had a little jam with our National guitars. The second time I met him, I had the pleasure to announce him I just began my solo career! Then I saw John Hammond and I knew I was on the right way!

You are known as one-man band. What are the differences between a band's concert and a solo act?

Freedom. You can't play the same way with a band. I've tried some of my songs with musicians. Some work but most of them don't. My partners couldn't find what to do on them as they're to be played by one man alone. When I join a band for a jam, I never propose a song of mine even if they ask me to. I prefer to join one of theirs and become part of them.

Quality. The link with the audience is so much higher when you're standing alone in front of people. Encounters you make before and after gig are more interesting too… With a band, you will tend to stay with the other musicians of the band, when you're alone, you have nothing else to do than open your heart to the people you meet every night. 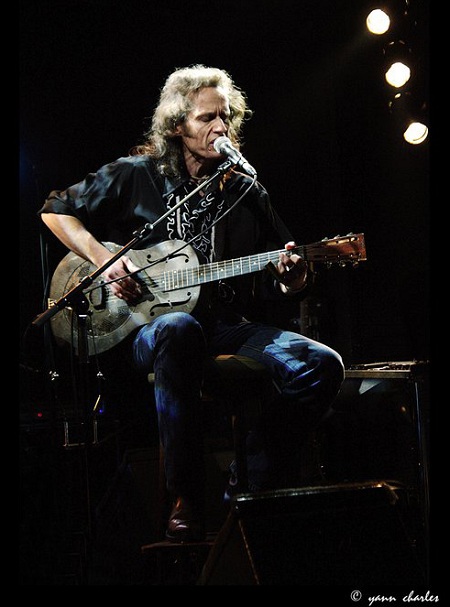 I don't know… Maybe creativity. Too many artists play the same old songs over and over again.

Crisis and Television both affect music industry and live shows. Of course it doesn't concern only Blues Music, but we (blues lovers) are so isolated! People buy less and less records, go out to less and less concerts and it's getting really hard to make it for artists like me.

In the 1920's and even later, Hawaiian music was very popular and all other categories of music were influenced by its typical style of slide guitar playing. You can hear it in Blues, in Bluegrass, Jazz and even some European popular songs.

Make an account of the case of the blues in France. Which is the most interesting period in local scene and why?

Definitely today! Current scene is terrific in France! Many bands and artists of all kinds of Blues who can compete with U.S. original ones! I think it's the same in all Europe nowadays.

What are the lines that connect the legacy of Blues from USA to Europe and special to France?

It all began early in the 1930's, there were some Jazz Clubs in France, and passionate people like Hugues Panassié, who invited black artists. Memphis Slim or Big Bill Broonzy later came to live and work in France because their career had slowed down in America and they heard they could have a new one in Europe and most of all, they would be called "Sir" in these places…

The National Guitar Company Shop, back in the 30's, with a pocketful of bucks! 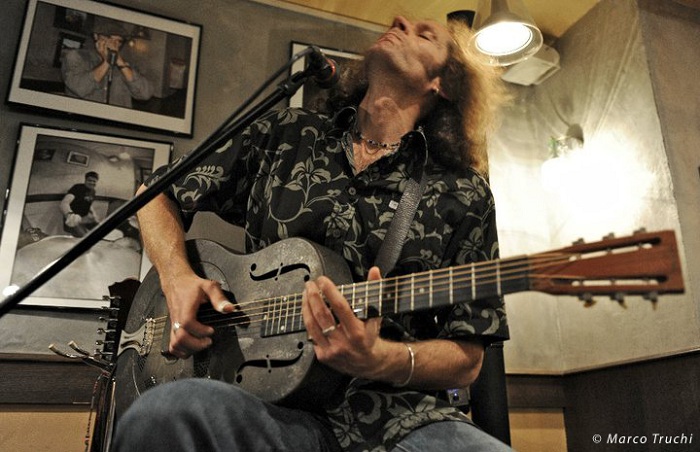