"It’s pretty hard to quantify in words. Blues, for me, is naked emotion. It’s beauty lies in it’s simplicity. There’s nothing plastic or contrived about blues."

Yuktarth Nagar: The Blues of Ganges

Yuktarth Nagar is a self taught blues guitar player from the valley of Dehradun, India. He was exposed to western music at a fairly embryonic age in his life, for which he will be perpetually indebted to his father. He grew up listening to pop classics like ABBA, The Carpenters, The Beatles, Bee Gees, The Eagles, Pink Floyd, Carlos Santana et al. He started taking guitar lessons at a ripe age of 13 from his father but for reasons best known to him gave up after a year or so. When we asked for his rather lackadaisical attitude towards learning, he quoted an extract from one of his guitar heroes Warren Mendonsa a.k.a Blackstratblues “Procrastination and OCD is one hell of a combination”. At some point during his early teenage years, he discovered British blues/rock guitar legend Eric Clapton. 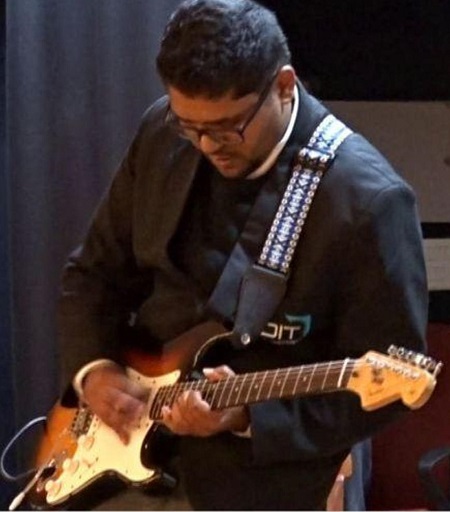 He fondly recalls watching Eric Clapton’s Crossroads Guitar Festival 2004 DVD as the turning point in his musical life because he instantly became a Clapton aficionado. He slowly but surely began to gravitate towards other blues legends such as B.B King, Buddy Guy, Jimmie Vaughan which is when he discovered the blues genre. It was in one of the summers in the years gone by when he was just a 16 year old boy, he discovered Texas blues legend Stevie Ray Vaughan. His eyes light up when he candidly talks about his reverence for Stevie Ray Vaughan. Watching him play “Texas Flood” at the Austin city limits was a moment of epiphany. Yuktarth yearns to recreate the essence of the greats of the past with a modern vibe attached to it, thereby making it sound distinctly Yuktarth. His major influences are Stevie Ray Vaughan, Eric Clapton, Rudy Wallang, Warren Mendonsa, Gary Moore, Kenny Wayne Shepherd, Peter Green, and Albert King.

I don’t know, really. It’s pretty hard to quantify in words. Blues, for me, is naked emotion. It’s beauty lies in it’s simplicity. There’s nothing plastic or contrived about blues. It’s got a universal appeal so, blues is as much a part of Dehradun valley as it’s home to Mississippi delta, if not more.

How do you describe Yuktarth Nagar sound and songbook? What characterize your music philosophy?

I have always been fervently fanatical about Stevie Ray Vaughan, his style and his tone.. I play with a Fender Bullet Stratocaster. I like the single-coil vibe of Stratocaster. I like my guitar to sound crystalline, ethereal and edgy. Over the years I’ve experimented a lot with my guitar vis-à-vis modifications. In a strange sort of way, it’s my workbench.

Again, it’s pretty hard to describe what my music philosophy is. The kind of stuff which I’ve listened over the years must’ve had some sort of bearing and influence on my style on a very subconscious level, I suppose. Usually I play alongside a backing track which sort of sets the mood. My first take is usually the best and the most natural, and I usually build on that, because whatever you do that after is a derivative of your first take. 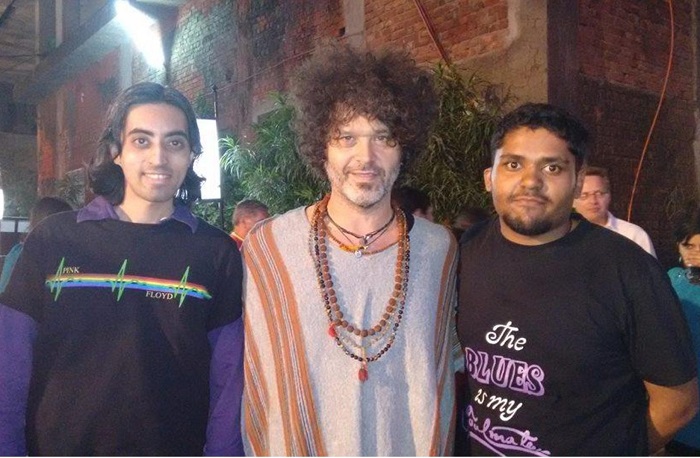 "My biggest fear is that the current crop of blues players aren’t getting the recognition which they might be hoping for." (Photo: Yuktarth Nagar with Doyle Bramhall II & friend)

I’ve done a couple of gigs but I have fond memory of one gig in particular – InkStorms Art Project. They champion the cause of promoting music and literature and I was invited to play at one of their events. The audience were relatively new to blues but extremely receptive, to my pleasant surprise. I was happy to share my two cents with them.

Earlier this year I made a trip to Bombay for Mahindra Blues Festival, an annual two day event, which also happens to be the biggest blues festival in Asia. It was quite a surreal experience to see artists such as Buddy Guy, Doyle Bramhall II, Rich Robinson, and Warren Mendonsa perform. I also had the opportunity to have a quick chat with some of them in person. Warren Mendonsa, Ehsaan Noorani et al were extremely magnanimous and gracious in their demeanor.

I actually don’t miss anything at all. Look, music in general is considered to be in the pink of it’s health when it evolves from it’s roots, adds something to new to what has already been done to death, and in process making it distinct and fresh. If you allow me to illustrate my point, you’ll see British blues players took American blues, made it a lot heavier by plugging their guitars into stacks of loud Marshall amps, and also the music seemed a lot more hopeful by mixing both major and minor blues scale. Then we had rock ‘n’ roll taking a cue from blues in the ‘70s which essentially was an era of guitars. When you look at players like Doyle Bramhall II, Derek Trucks, Blake Mills, Quinn Sullivan, Tallan Noble Latz, Chris King Robinson, you’ll realize they’re tethering on the edge and pushing the envelope. Two of my favorite bands Soulmate and Blackstratblues are doing the same here in India. My biggest fear is that the current crop of blues players aren’t getting the recognition which they might be hoping for. This genre is not mainstream unlike pop music or rap or hip-hop etc. Consequently, kids growing up might not want to take up guitars as their single-most passion to pursue, primarily because there aren’t enough heroes on sight to emulate.

Hopefully musicians will refrain from distributing their music for free and more importantly listeners will lighten up their pocket and buy music. Spending a measly 500 quid on a record which will stay with them for the rest of their lives than spending on a Diet Coke in a movie theater which will be gulped down one’s throat in minutes surely is not asking for too much, is it?

Make an account of the case of the blues in India. Which is the most interesting period in local blues scene?

Blues as one would imagine, is a niche genre and caters to a very small but cult audience here in India. It’s still at a very nascent embryonic stage of its musical life, but it’s flourishing and becoming more and more popular with every passing minute. I envisage an extremely thriving and hopeful future for blues in India. Festivals like Mahindra Blues, Himalayan Blues and Ode To The Blues are championing the cause of blues. With regards to the most interesting period, without any hesitancy I’d say the era I’m living in at the moment is the most interesting. I’d like to imagine we’re on the threshold of something fantastic, and I genuinely believe in what I’m saying.

What are the lines that connect the legacy of Blues from United States and UK to India?

I’d like to go to the beginning and would like you to revisit my answer to your first question. People and their emotions by large are pretty much the same whether it’s UK or USA or India. When Peter Green is singing ‘Man of The World’, his words and music resonates to the Indian listener as much as it does to British folks. The universal emotional appeal is what connects the legacy of blues from all across Europe and America to India. 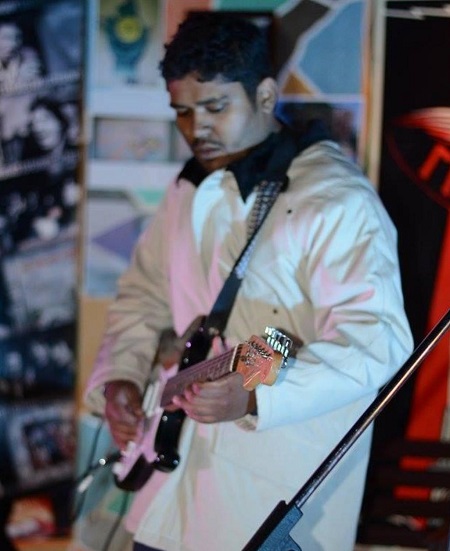 Having had the opportunity to watch my favorite band ‘Soulmate’ perform in 2012 will probably stay with me for the rest of my life. That was my first ever gig and I’ll always have fond memories of that. The whole ritual of waiting in the queue, watching them soundcheck, and then of course the actual event was quite surreal.

Strictly speaking in terms of musical theory, no. But both folk and blues music are deep rooted and have been an integral part of our society for decades and centuries. And also the underlying theme of both forms of music is they tell stories of common people.

I’ll probably go back in time and take a trip down memory lane to Alpine Valley Resort, Elkhorn, Wisconsin on August 26, 1990. It was an Eric Clapton tour, and Stevie Ray Vaughan was invited. Other players on the bill included his brother Jimmie, Buddy Guy and Robert Cray.

There are 2 reasons I’d want to go there. Firstly, this set list has all my favorite SRV numbers with a couple of bonus covers I can die for to watch him do live. I’m sure I need not to put up the second one but, for the readers who might not know, this 3 day concert ended on August 27, 1990 with the performers playing a rousing rendition of “Sweet Home Chicago.” That was Stevie Ray’s last song. After the show, Stevie was killed in an ill fated helicopter crash along with pilot Jeff Brown and three members of Eric Clapton's crew including his bodyguard and tour manager. Stevie may have been gone but his spirit and music lives on.