Interview with James Trussart, one of the few builders who has broken the mold of traditional guitar making

"Great music never will die and especially with the new technologies, it will forever inspire now and next generation of musicians of all genres."

James Trussart is one of the few builders who has broken the mold of traditional guitar making. Working with steel as the primary material, he produces guitars that are as unique in appearance as they are in tone. Trussart is a musician-turned-luthier. The French native began his career as a fiddler, accompanying Cajun singer-songwriter Zachary Richard in the late '70s, before turning his attention to crafting violins and later guitars (in the 1980s). From his Los Angeles home and workshop (where he has resided since 2000), Trussart crafts custom steel-bodied guitars, basses, and violins in a dazzling array of finishes, reminiscent of shiny chrome resonator instruments and rusty, weathered, fossilized discarded machinery. 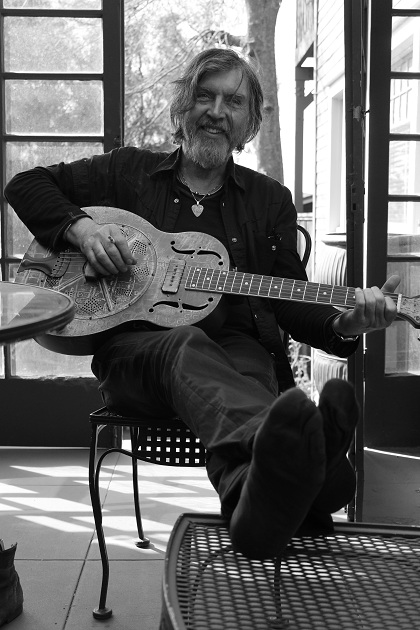 Trussart's creations are designed to have the look and feel of a vintage instrument with the added appeal of metal construction. His "Rust-O-Matic" technique (a term coined by Billy Gibbons regarding Trussart's unique finishes) involves leaving the guitar body exposed to the elements for several weeks, allowing it to corrode before treating it to stop the corrosion. He then sands it to replicate years of distress, and then finishes it with a clear satin coat.

Many of the Trussart models feature patterns either engraved or literally imprinted into the metal bodies or on the pickguard or headstock. Engraved skulls, roses, and tribal art are some of the more common themes, while others feature textures of alligator skin or plant materials. He literally 'sandwiches' the metal with the alligator skin and lets it sit in water for several days. Various pickup options are offered, but standard fare is Arcane Inc. Custom Pickups that are built specifically for the Trussart guitars and basses. Neck options offered are the classic radius and shape guaranteed to fit the most demanding player's needs.

Since I was a kid, music has been a big source of joy and still is as I go see as much as I can live music show of bands or artist song writers that I like.

I play records almost every day, I still buy vinyl and CD's more than downloads. I like the artwork on LP covers but I also appreciate the fact that you can have a whole library of your favorite music at the tip of your finger wherever you are travelling. 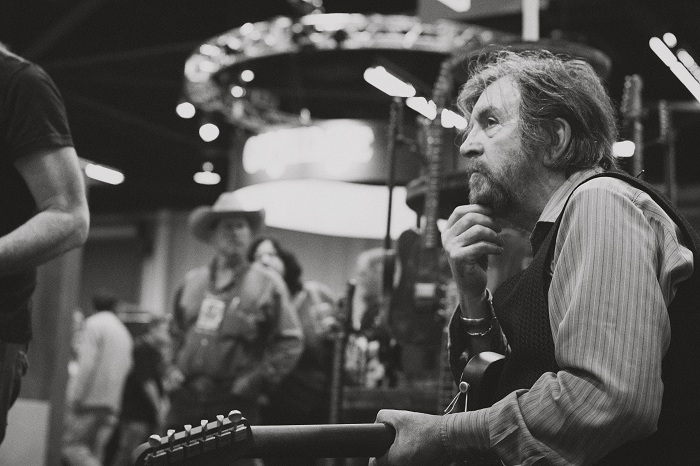 "Just a note to let you know we're thrashin' them blues on the fine James Trussart silver 6-string. It's funky. The tone is the thing...and this instrument has got some tone." --- Billy Gibbons /  Photo by Tanya Alexis -- James in Anaheim, CA. 2013

How started the thought of custom guitars?

Collecting and repairing my vintage guitars gave me the idea of experimenting and bringing some ideas to life as my first experience was to build myself a hollow body steel fiddle…it was 3 times heavier than my wood violin!

From years of instruments repairs and modification, pick up replacement, and trying to make my musician friends happy. So listening to musicians and tryin to fulfill their expectations.

When did your love for collecting vintage guitars come about?

In the mid 60's, I realized how fun it was to put my hands on all kind of instruments and try to play them or to use them for a music projects, I’m still hopeful to find time to do this.

How would you characterize the philosophy of James Trussart? What is your most vivid memory from your progress make a custom guitar?

As musician, what’s the best jam you ever played in?

With Zachary Richard and also with Penta Swanson.

You have come to know great musicians. Which meetings have been the most important experiences for you?

I have had so many great meetings with great musicians that I could write a book about it! Just these past two months invited attended rehearsals and concerts in Europe with Brian May, Chris Spedding, Robert Cray, Amadou & Mariam, in LA Sheryl Crow and her musicians as well as the Roots, Lianne la Havas in Paris, Robert Plant and CC Adcock in New Orleans.

Are there any memories from Dylan, Keith Richards, Clapton, and Billy Gibbons which you’d like to share with us?

Tony Garnier on a Steelcaster bass, Billy Gibbons always have been very supportive and always great sharing ideas with such a creative man. I heard through Doyle Bramhall that Eric recently recorded some J.J. Cale songs with my Resogator and loves it which makes very happy as J.J. Cale left us too soon. JJ and Keith are some of my favorite guitar players. 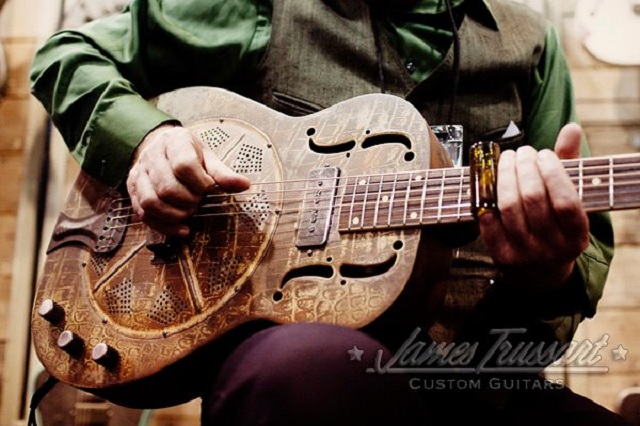 "Without Fats Domino, Hank Williams and Elvis ... No Beatles, Stones ... and no CC Adcock." Photo by Tanya Alexis -- James Trussart playin' his SteelResoGator

What are the differences of Trussart’s guitars from the other brands?

Some kind of Mojo and Soul in the tone and the vibe.

To which person would you like to send one?

Ernest Ranglin! He is one of my favorite Jamaican guitar players.

Great music never will die and especially with the new technologies, it will forever inspire now and next generation of musicians of all genres.

There is a lot of great stuff to discover and to learn on youtube.

Someone ask me for a custom guitar with a little fish tank in it so you could look at his little gold fish while he's playing, so I connected this customer to a friend of mine guitar maker who did it. 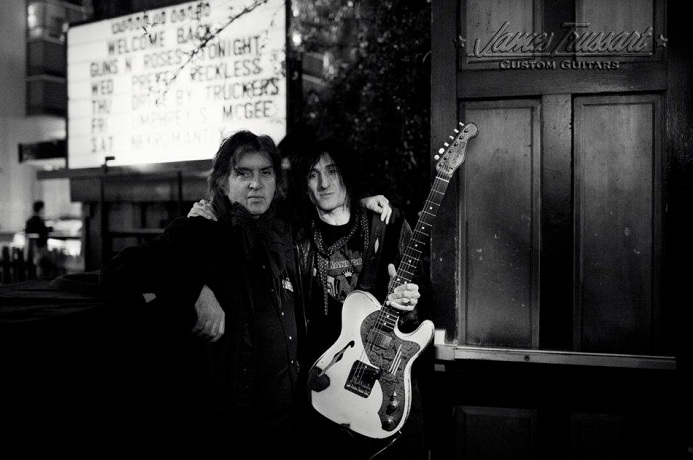 "Since I was a Kid, music has been a big source of joy and still is as I go see as much as I can live music show of bands or artist song writers that I like." James with Richard Fortus at House of Blues, Sunset Strip. Photo by Tanya Alexis

What are the lines that connect the legacy of Blues with Cajun and continue to Jazz, Americana and Rock n’ Roll?

Without Fats Domino, Hank Williams and Elvis ….No Beatles, Stones …and no CC Adcock.

Bob Dylan playing my guitar along with the rest of the band, including Charlie Sexton with his SteelMaster (or one of his other Trussarts) and Tony Garnier on a Steelcaster bass.

Hold on tight to your dreams.

My first festival in Plumpton UK, the 9th National Jazz and Blues Festival, summer 69, Google up the line up ... the Who, Soft Machine, Family ... 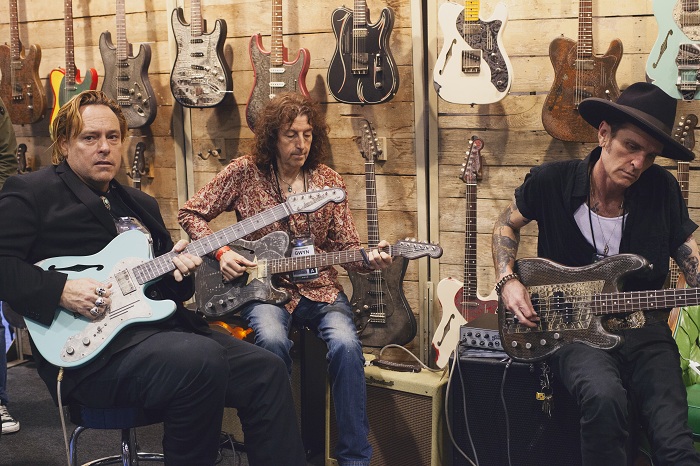