"The blues is a way of comforting people. Let people know that they're not alone. By speaking in a language that talks directly to their soul. Its about relating feelings to one another."

Daddy Long Legs, Waterloo, Ontario's hard boiled garage blues band, formed in 2001. Daddy Long Legs focused on developing their own songs and sounds, trying to emulate, but not imitate, their favourite blues artists.  This hard work led to recognition from within the Canadian Blues community, as Daddy Long Legs were finalists in the 2004 Toronto Blues Society New Talent Search. This was followed by a Maple Blues Award in 2008 for best New Artist, a Canadian Independent Music Award in 2009 for Favourite Blues Band, and a chance to represent the Grand River Blues Society in the 2009 International Blues Challenge in Memphis, TN. 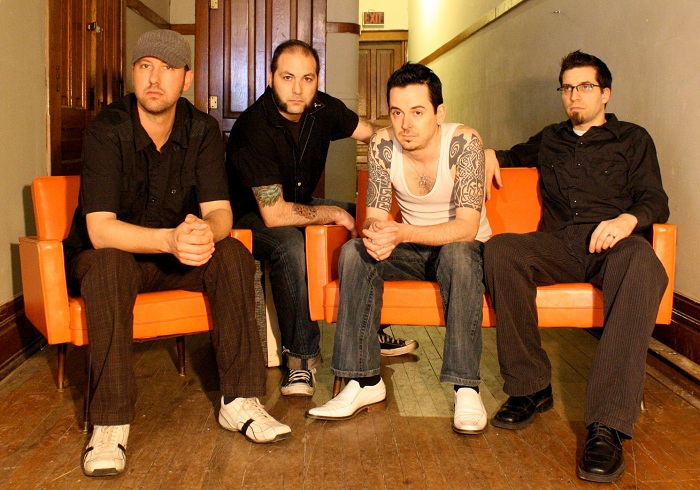 With an almost cult-like status in Southern Ontario  and well known for their raucous and energetic live performances, Daddy Long Legs are the harbingers of Canadian garage blues; ragged and greasy in all the right places, with snarling tones that hit like a hammer and roll steady like a steamroller. With much respect to the giants of blues from the past, Daddy Long Legs are blazing a new trail for the blues, giving it a new vital voice and developing a devoted following of blues fans of all ages.

The band, Mike Elliott on guitar and vocals, Chris “Junior” Malleck on harmonica, Steve Toms on bass, and Jeff Wagner on drums, unleashing their 5th CD, The Devil’s in the Details, their second for indie label Busted Flat Records. The album is raw, modern blues music ripe for road trips, parties, break-ups, hook-ups, loneliness, love and all things in between.

When was your first desire to become involved in the blues culture? What does the BLUES mean to you?

Mike: My father introduced me to the blues. He used to play Freddie King and James Cotton 8 track tapes in his convertible…That was it, I was hooked. Much later, after seeing Mel Brown playing in my hometown, I decided that I needed to buy a guitar and try my hardest to be half as cool as he was.

I feel connected to that type of music unlike any other music genre.  Blues is the soundtrack to my life. Blues music is always rattling around in my head. It’s a 12 bar shuffle on repeat ringing in my ears. To me, blues is the musical embodiment of the human condition, - passionate, flawed, and inspiring all at the same time. It’s the healing prescription to all your ailments.

Chris: I got involved after hearing an old Elmore James album at about the age of 14. Soon after I heard Muddy and I was hooked for life. It was the most soulful, real music I had ever heard. It spoke the truth. That's what the blues means to me.

Steve: When I was a kid my dad used to take me to the blues picnic at Frog Hollow where blues acts from the area and from the states would play on the back of a flatbed all day. I started playing bass real early in my life so when I saw those blues guys playing I thought that the music really made sense to me and I wanted to be part of that club.

For me blues is a way of comforting people. Let people know that they're not alone. By speaking in a language that talks directly to their soul. Its about relating feelings to one another. Feelings of heartbreak, frustration, hopelessness. But blues also speaks about brotherhood, joyousness and celebration. It speaks about what's real. 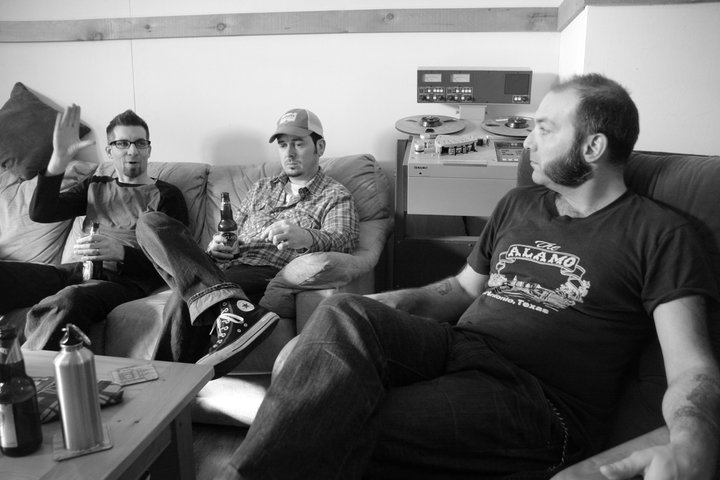 "The blues is the musical embodiment of the human condition, - passionate, flawed, and inspiring all at the same time. It’s the healing prescription to all your ailments."

How did you choose the name and where did it start? How do you describe the music philosophy of Daddy Long Legs?

Mike: My wife came up with the name. I wanted something with Daddy in the name that would sound familiar to people, and she suggested Daddy Long Legs (the name of a common spider).  It worked. Even at our first few gigs, people would say that they had heard of us.

Daddy Long Legs prides ourselves on having an original voice in the blues. We want to add to the blues vocabulary with our own material…and we want to have a good time…all the while having good TONE.

Would you mind telling me your most vivid memory with Daddy Long Legs? Which memory makes you smile?

Mike: I have over a decade of vivid memories with Daddy Long Legs. It is impossible to choose just one. Every show gives me the opportunity to play the music that I love with four people that share the same musical vision and passion….and we try to play every tune as though that might be the last one…you feel like we are barely holding things together, and that any moment everything might explode into fire and cinder. It is a truly addictive experience.  It makes me smile every time.

Chris: We were part of the International Blues Challenge in Memphis in 2009. It was the first time we had travelled as a band in that capacity; Flights, hotels, a 2 night gig for a giant festival. We had a lot of fun together. We had released the album that year so it was fresh; we played a bunch of shows in a row before the trip so we were ready, comfortable on stage.

My other vivid memory is meeting Mike. We asked each other who we were listening to and it was all the same cats. We jammed that night and we just knew what the other guy was going to do. I'll never forget that.

Steve: My most vivid memory of being in the Legs is a hard thing to pin down, there's been a lot. Maybe the time I hit that that drunk guy with my bass in Guelph. Or winning the first national award was really neat. 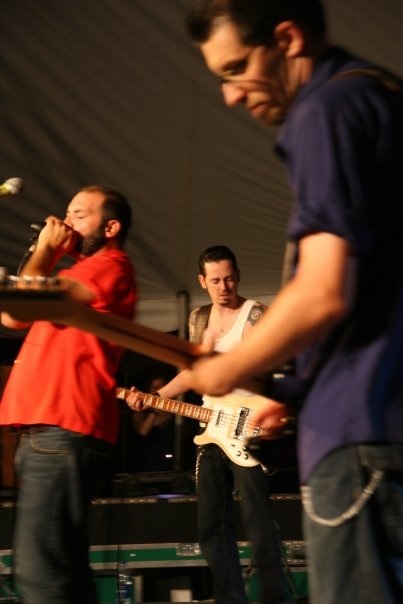 Mike: Canadians like all kinds of roots music. I think the like the honesty of it. Blues is also a cathartic music that appeals to a nation of somewhat mellow people like Canada.

Chris: Because blues music is good, honest, music full of life both troubled and celebrated kind of like Canadians. We have the U.S. and all that blues history at our doorstep, and we seem to produce some pretty good musicians.

Steve: There is a steady interest in the blues from both young and old, and that ain't going away.

"Daddy Long Legs prides ourselves on having an original voice in the blues."

Mike: Every show we do has the potential to be our best one yet...

We’ve had some pretty memorable gigs. But, probably the most memorable was playing on Beale Street in Memphis for the International Blues Challenge.

Chris: We opened for the Fabulous Thunderbirds in our hometown a few years ago. That was a great gig. Nick Curran was in the T-birds then, Kirk Fletcher, Ronnie James Weber, and Jimi Bott, Gene Taylor and of course, Kim Wilson. It was a killer line-up, amazing show and we partied pretty hard with the band after.

Steve: Playing in Memphis was amazing! Never thought I was gonna get to do that.

Mike: Like many musicians in my home town, meeting and playing alongside Mel Brown was one of the most important experiences for me. Mel had a way of encouraging you to seek your own voice when playing the blues. His very personal style of playing was a big influence on my playing.  He used to say “just keep doing what you’re doing”. I took it as an endorsement of my playing.

Chris: Meeting James Harman about 11 or 12 years ago was a big moment. Mike and I went down to a festival in Lansing Michigan to see James and ended up hanging out for the night swapping stories and talking music. He's just a great cat. Kim Wilson has been a big influence. He told me once, "if you can't play it quiet, you shouldn't play it loud." He's taught me a lot about tone and presence just by that line alone.

Steve: The most important meetings I've had are meeting the other Legs. The best advice ever given to me was when they said "Hey Steve, you should be in our band". I took their advice and it seems to be working out pretty good. 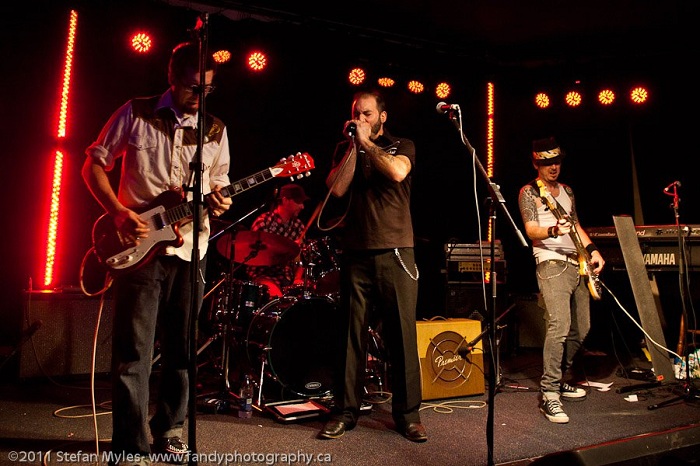 "The blues was the most soulful, real music I had ever heard. It spoke the truth."

Chris: It's been called the misery whistle for a reason. You're totally connected to the instrument when you play. It's like singing. It comes from down below, it's controlled like the voice. It can mimic all the sadness and strife of the blues, but it can bite pretty hard too.

Mike: Many blues artists of today rely heavily on style over substance. They focus on their appearance and flashy outfits. While style is important, it is the substance of what you are playing that resonates most with audiences. Without good honest songs, with good lyrics and catchy hooks, you’ve got nothing.

Chris: I miss the simplicity of the music, the space. I use an old amp for the sound of the tubes, and the speaker, and the wood. There are too many pedals and gadgets these days to make everything louder and fuller. I'm not a total purist but I like that old sound where the tunes had some room in them.

Steve: I don't miss blues from the past. I treasure it. I hope music remains in the hands of the artists and musicians with integrity flourish.

What are the lines that connect the legacy of Blues with garage and continue to Rock n’ Roll music? 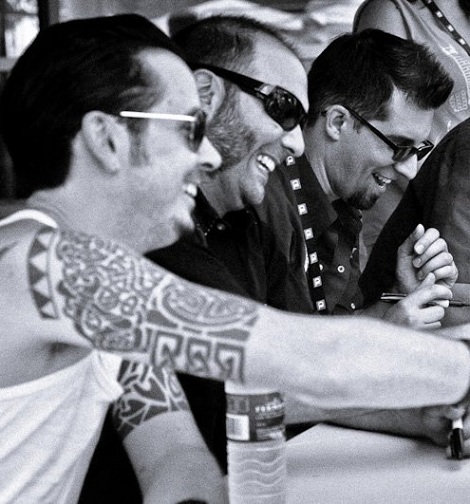 Mike: All music, at least all the best music, have the same components. They are played with passion and intensity, as well as a constant exchange between tension and release. Those components have are the common threads that connect the garage rock, blues music, and rock n’ roll.

Chris: Garage was a more of a term rather than a genre in the 60's. I think the rawness of the blues, and then rock and roll was the birth of what might be considered garage. I think "garage" in a way, was the first punk rock. Raw and unabashed. Not interested in the bullshit, just the music.

Steve: It’s all music baby! Genres cross and intertwine all the time. They always have. Putting music into categories confuses me. It always has. Music will always evolve by striving for the future while embracing the past.

Steve: I would love to go to 1960's Chicago and see Howlin' Wolf perform.

From the musical point of view is there any difference and similarities between an USA and local Blues Band?

Steve: The blues from Canada is coming from the same place as the blues in the US and the blues in Europe. We're all on the same boat paddling in the same direction.