Interview with L.A. poet and essayist Hiram Sims, blends his words with amazing images and music

"Jazz and blues continue to generate a devoted following simply because it sounds good. From a poetic standpoint, the complexity really begins when we have to rationalize lyrics that we don't agree with."

Hiram Sims: The Imag(in)e of Poetry

Born and raised in various parts of Los Angeles, Hiram Sims is a poet, essayist and adjunct English Professor teaching Composition and Creative Writing at Cal State University Los Angeles, Long Beach City College, and Compton College. In addition to teaching, he is the Director of The Community Literature Initiative. He has published three collections of poetry, including Poems of a Young, Troubled Mind (2007), Write or Die: An Anthology of Poetry from the Urban Poet's Workshop (LA Bookshelf Publishing Group 2008), and PHOTOETRY: Poetry and Photography from South Central (Figueroa Press 2013). 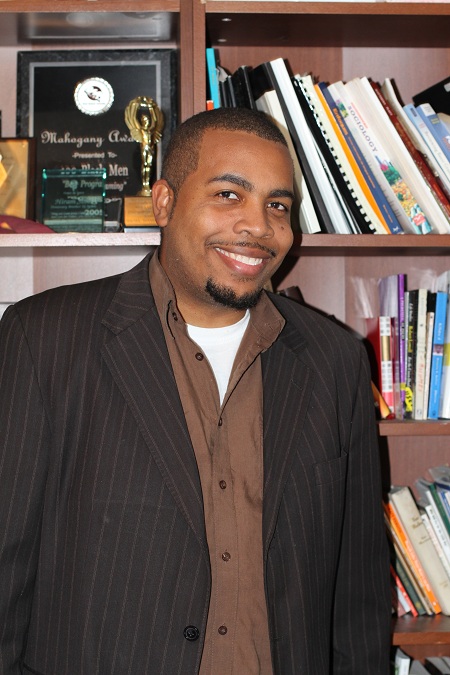 The concept of Photoetry, the artistic combination of photography and poetry, was born eight years ago when two college students attended an art gallery downtown. Professor and poet Hiram Sims, a USC undergraduate at the time, was inspired to have his own work hung for others to admire after seeing what another local artist could accomplish. The concept is a riveting collection of poetry and photography from a city quite legendary for its ferocious magnetism. The process of creating this lyrical and visual testament to life in Los Angeles involves either creating photographs inspired by completed poems, or writing poems based on captivating pictures. Hiram Sims blends his words with amazing images from photographers Sam Bendall, Adam Tillm-Young, Ameer Espy, Kim Soria, and Charisse Sims to create a truly unparalleled compilation of work.

Hiram Sims has also a strong love and admiration for children. He is available for after-school tutoring and homework help, as well as creative writing classes. Hiram graduated undergrad and grad school from USC.

What characterize Hiram Sims’ poetry? What experiences in your life have triggered your ideas most frequently?

My new Book PHOTOETRY: Poetry and Photography from South Central, is primarily characterized by my neighborhood. I often find that what we choose to write about is directly or indirectly influenced by our region of the world. Even if we are not actually writing about the region, there are aspects of the region that tend to come out when we put the words down on the paper. It's very similar to an accent that is spoken when you hear someone foreign speak to you. They might actually be speaking the words of your language, but you can hear the remnants of their region when they speak. I currently live in south-central, and I hear so much of the regional ethnic lexicon in my work. I must also admit that this stage in my life has brought an interesting degree of suffering, which you would probably characterize as the blues. Even though my primary goal is to depict the joy I experience in life, the poetry that I'm writing recently is inspired by pain. 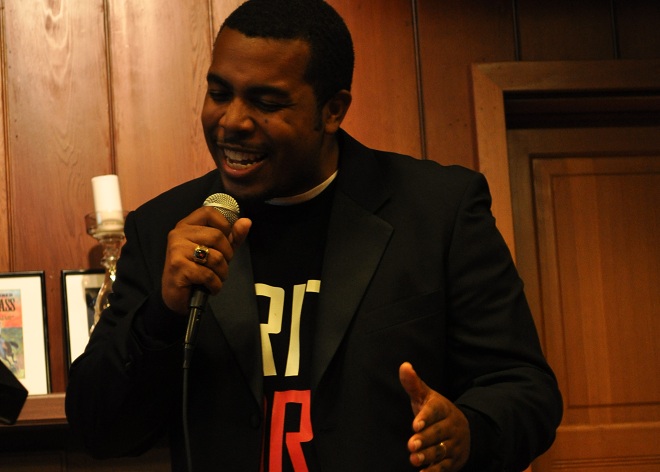 "I believe that we are constantly trying to articulate things that are very simple. That articulation gives us the illusion that our ideas are more complex than they really are, but the reality is ideas, just like music, penetrate or repel us immediately."

The evolution that I see in my poetry has followed the evolution of my interests relative to my age The first poem that I ever wrote was a reflection of the poetry that I had grown up hearing in church. After the prayer and a few songs, someone would read a poetic Scripture called an Opening Lesson. Most of these poems were taken from the book of Psalms, so my first poem was a reflection of that type of didactic lyric speech. Right around 12 years old, my total life focus became women, or more accurately, girls. So I became intensely interested in love poems, which I found primarily in greeting cards at the local drugstore. Almost 90% of the poems I wrote for that age to age 24 were in an attempt to get a woman to love me. Then after I met my wife, all my poetry became about getting a good job. So the focus of the poetry seems to always be connected to what I do not have yet.

How started the thought of “Photoetry”? What is the relation between music, image and poetry?

PHOTOETRY as an artistic concept came to me when I attended an art gallery show which was featuring a painter named Azikiwe Andrews. My friend Alexia Lewis and I were both in college, and she invited me to go see the painter’s work. After a few moments,  got fiercely jealous that I, as a poet, did not have an artform that could go on a wall. Alexia was a photographer, so I suggested to her that we put on a show that was poetry and photography on the wall together. From there, the concept grew to the collection it is today.

How can the arts crush the shackles of the human spirit and mind? How we can change the world? 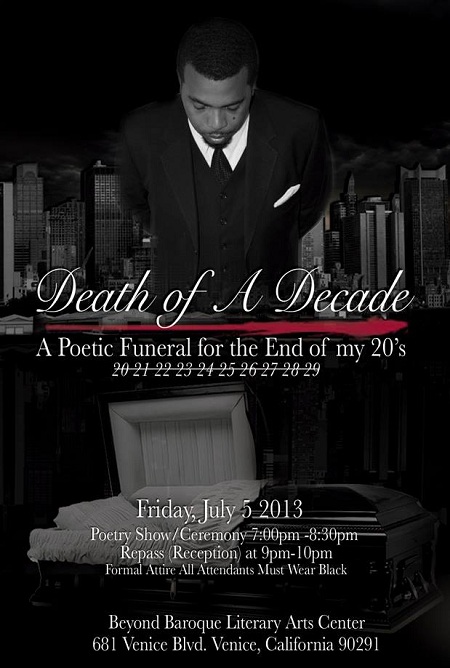 I think it has been proven time and time again that poetry has the power to both liberated and in prison the human spirit. We primarily look at the arts as a way to excavate the deepest and most private parts of ourselves, which usually results in our freedom. I often remember Phllis Wheatley’s story as the primary example of how poetry can set you free. Phillis was an American Slave who won her freedom through the publishing of her poetry, which convinced many of her fans that a woman of her intellect was not fit for bondage. Her story convinces me that artistic representations of culture communicate humanity. On the other side of the coin, just last year, Muhammad Al Ajami was recently sentenced to life in prison for a poem he wrote against his government. These two examples communicate to me that poetry has the power to remove shackles and apply them.

From whom have you have learned the most secrets about music and poetry?

Aside from writing poetry, I also play the bass guitar, and noticed that my poetry has more rhythm since I started playing blues songs. Music with teach you about variation within rhythm, so I would say that the radio been the best teacher I’ve ever had. Without rhythm, people cannot follow poetry, and certainly cannot follow a song.

What are your hopes and fears for the future? What made you laugh and what touched (emotion) you?

That's probably the hardest question I have ever had to answer. I have about 10,005 hopes which buzz around my head all day like killer bees. One of my hopes is that I will eventually be able to write and teach poetry for a living. Right now, I primarily teach composition, which is essay writing at a few colleges and universities in Southern California. However, I went to school for six years to learn how to teach poetry, so the closer I get to being able to make that my vocational focus, the closer I draw to my destiny. I see so many people who have forfeited their dreams for prosperity, and I know they did that because they are responsible human beings. People have children, mortgages, car notes and other obligations that have to be met. Although I have a young growing family, I don't want to give up that goal or anything or anyone. But I will if I have to.

Which incident of your life you‘d like to be captured and illustrated in a graffiti painting? 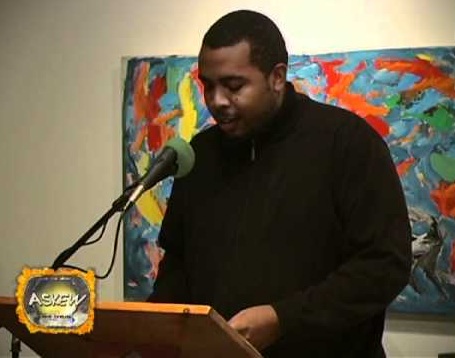 Active poets, like active musicians, spend a lot of time on stage. And there is always a moment before a performance where there is a notion to turn around and walk out the door. I am usually able to overcome this temporary fear, but I know that there are other poets and musicians who do walk out the door. It would be great to draw a mural of an artist debating whether to go on the stage or succumb to the fear of performing.

The best advice I was ever given was not actually something that was said to me directly. It was something that I was told in countless life narratives. Nelson Mandela, who was imprisoned for 27 years, used a poem to strengthen his spirit while enduring some of the harshest treatment any innocent man can endure. The poem, called Invictus, by William Ernest Hensley, supplied him with what he needed to live another day. “Out of the Night that covers me/ Black as the pit from pole to pole/ I thank whatever Gods may be/ for my unconquerable soul..” Poetry should be a tool that the human mind can use as motivation to continue on until brighter days are realized. The idea that a poem can be one of the elements used to sustain is a revolutionary thought to me. So Nelson Mandela taught me that I should write poems that kind of power.

Why did you think that Jazz and Blues continues to generate such a devoted following?

I believe that we are constantly trying to articulate things that are very simple. That articulation gives us the illusion that our ideas are more complex than they really are, but the reality is ideas, just like music, penetrate or repel us immediately. When I hear what I consider to be bad music, it only takes me about 2 seconds to identify sounds that repel me. When I hear music that that I consider to be good, I immediately react by turning it up listening more closely to what is being played. Jazz and blues continue to generate a devoted following simply because it sounds good. From a poetic standpoint, the complexity really begins when we have to rationalize lyrics that we don't agree with. At some point in our consciousness, we must wrestle with the notion of what sounds good versus what is good for us to hear. The famous Los Angeles poet Kamauu Daood said it best when he said, “Everything is Food.” Since we consume music like we consume bread, we must be mindful of what we take can. 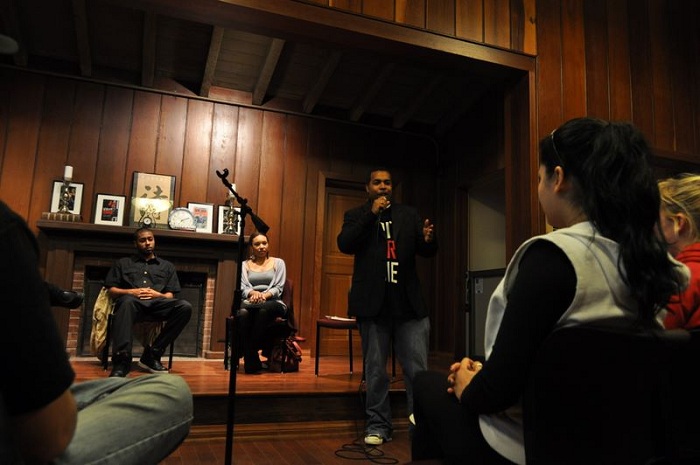 "I currently live in south-central, and I hear so much of the regional ethnic lexicon in my work. I must also admit that this stage in my life has brought an interesting degree of suffering, which you would probably characterize as the blues."

Well, in my opinion, rappers are the most successful poets the world has ever seen. If I were to pick a famous poet to kick it with, it would be Busta Rhymes. Lyrically, the guy is outstanding. Especially the Extinction Level Event Album. Fire. I would also like to meet King David, who wrote the book of Psalms. I’ve never read an author so honest about his own vulnerability. It would be fun to have a 30 minute writing session with both of them at a Starbucks and see what comes out.