"I believe that Blues and Roots music and culture are important as a statement about the living conditions and experiences of past generations. It is essential in understanding what we are and where we've come from and in helping us understand each other."

Jeff Espinoza is from Los Angeles, California where he graduated with degrees in Psychology and Ethnic Studies at California State University, Fullerton. He combined his love of music along with his studies and work with autistic children while playing in a number of bands in California. Seeking to perfect his musical knowledge, studied Composition, Voice, Piano & Music Theory, and Recording Techniques at Orange Coast College and California State University, Fullerton and also attending numerous Recording and Songwriting Seminars in Los Angeles. Jeff studied Bel Canto with Inés de Rivadeneira for ten years to further develope his vocal technique. 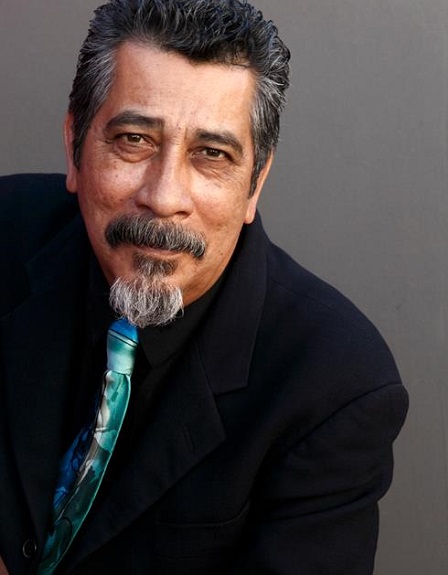 Jeff arrived in Spain in 1980 with the Californian group “No Justice” and progresively became part of the Spanish musical panaroma playing with the legendary “Flying Gallardos” with whom he recorded his first album in Spain. Later on Jeff became the lead vocalist and lyricist with the Vargas Blues Band, recording three albums, before forming RED HOUSE with Francisco Simón. Since 1998 they have recorded six Cds (Red House, Hold On, Captured Live, Rattlesnake Road, Chihuahua Boogie, and Red House Hits 1997-2012). Jeff has composed and written lyrics to more than 500 songs in diverse styles, and has collaborated with numerous artists such as “Blue Lou” Marini, Dan Aykroyd, The Blues Brothers, Chris Rea, Junior Wells, Flaco Jimenez, Lonnie Brooks, Larry Graham, Larry McCray, Preston Shannon, Larry T. Thurston, Double Trouble, and Gene Taylor, etc. Jeff has recorded hundreds of publicity adds and records, and has also recorded as a voice and dubbing artist with countless films, adds, and documentaries. He has also recorded for Television, Radio, Cartoons, Documentaries, and Movies. Jeff is a member of SGAE (Authors Society of Spain) and of AIE (Performers Society of Spain).

You learn about history and where you've come from as a culture. American Roots music talks about our past generations stories and how their music heritage has enriched us and our present music. The blues is all about those struggles and stories and the deep rooted feeling of those experiences.

How do you describe Jeff Espinoza sound and songbook? What characterize your music philosophy?

I basically try and tell stories with my songs. I've always enjoyed a good song with a great melody and lyrics. I've had a great life with many wonderful and varied experiences and try and blend those into my songs. My music tends to be a blend of all the great music I've listened to while growing up and playing music all these years. I have a great imagination and also use my background in psychology to try and think about how other people think and feel. I tend to have more of the old fashioned singer songwriter approach to my music and try and write songs that can stand on their own with only a guitar or piano and voice.                                      (Photo by Endika Ussia Apraiz) 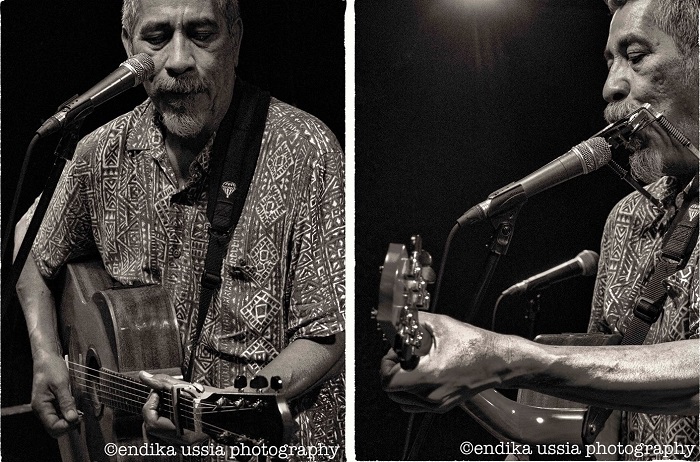 "I think that here in Spain you have Flamenco music which is also a deeply roots oriented music with a long standing tradition. I think that's why Blues here in Spain is so well received and appreciated. It's the roots and sentiment of the Blues that connects with the public here in Spain."

I went to high school with the pianist Gene Taylor who was the first professional in our school. I used to go here him play all the time at the Falcon's Nest in Long Beach, California. I was just starting to play guitar and playing my first gigs while I was going to the university. Later on I played in a band called The Sliders with Chuck Cutter who was writing these great songs. He was the one who influenced me the most on my way to becoming a songwriter. He was also the one who got me to come to Spain many years ago which turned out to be the best bit of advice I ever got! Years later I started performing with Blue Lou Marini the sax player of the Blues Brothers. Lou is everything a professional musician should be and he's a total gentleman with a great sense of humor. I've learned so much from him and it's a total honor to be able to share the stage with him.

Are there any memories with the Tex-Mex legend Flaco Jimenez which you’d like to share with us?

Getting to know and record with Flaco Jimenez has been one of my best memories. He's an amazing accordion player with a terrific sense of humor. He's so much like my family and it was an enormous pleasure playing with him. We had some great laughs and lots of beer with his band. What fun!

What do you miss most nowadays from the music of past? What are your hopes and fears for the future o?

I guess I miss more the way music is recorded and performed. There are so many technological advances in the recording process that has made it possible to achieve perfect recordings. However, I tend to miss the spontaneity of a group playing live together. Sometimes all the effects and overdubs can sterilize a recording. I hope for a future with lots of live music and a cultural ambiance supported by the public and also government agencies. Music is our heritage and identity and it must have the freedom to be performed everywhere. 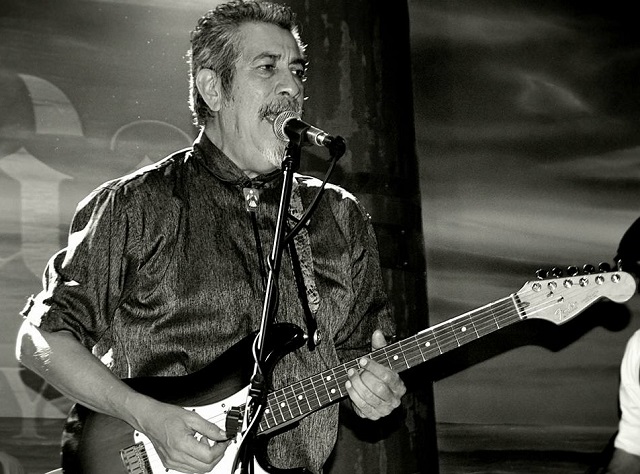 "You learn about history and where you've come from as a culture. American Roots music talks about our past generations stories and how their music heritage has enriched us and our present music. The blues is all about those struggles and stories and the deep rooted feeling of those experiences." (Jeff Espinoza on stage at Piratas Rock Wey - Photo by Miguel Ángel Llano, 2015)

Make it possible for people who play and compose music to be able to publish their music and have it listened to by a greater audience.

What are the lines that connect the Blues from States to Spain? What are the difference between US and Europe?

I think that here in Spain you have Flamenco music which is also a deeply roots oriented music with a long standing tradition. I think that's why Blues here in Spain is so well received and appreciated. It's the roots and sentiment of the Blues that connects with the public here in Spain. The blues in the US is more Afro-American in nature while here in Europe you have all of the great English bluesmen and groups. It's all great blues music on both sides of the Atlantic!

What has made you laugh with Lou Marini and what touched (emotionally) you from the late Junior Wells?

Lou has a great sense of humor and always has great jokes and stories to tell. It's so great to hang out with him. I was sorry to hear about the passing of Junior Wells. It was a privilege to record with him and hear him tell stories about his musical experiences. He was a great musician and enormous influence. 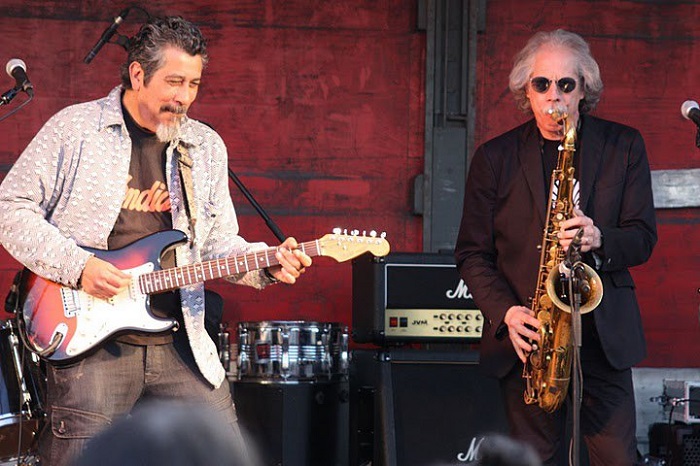 "Make it possible for people who play and compose music to be able to publish their music and have it listened to by a greater audience." (Jeff Espinoza & "Blue Lou" Marini - Photo by El Mafia)

What were the reasons that you started Psychology and Ethnic Studies and progress with autistic children?

Initially I thought I was going to become a teacher like all of my brothers but I eventually found myself in an introductory course in Psychology and like it so much that I ended up changing my major studies at the University. I also ended up taking some course with my younger brother in the Ethnic Studies Department and also made that another area of major studies. I ended up getting a degree in both Psychology and Ethnic Studies at California State University at Fullerton. I was going to get my Masters Degree and License to practice in Psychology and was working at a center for autistic children. However, I came out to Spain for what was going to be a two to six month vacation to see Europe and Spain. It was just then that I started writing my first songs and with that a radical change of plans in my life.

You'd probably want to talk to a Sociologist to get a better answer. I believe that Blues and Roots music and culture are important as a statement about the living conditions and experiences of past generations. It is essential in understanding what we are and where we've come from and in helping us understand each other.

I basically do this everyday! Basically living in Spain and playing my music. I live well and get to do what I please for the most part. I enjoy the great food and wine, the sporting activities (I play tennis and padel and run) and have great friends, family and fans here. Of course there are many other places I'd love to see and experience. I'd love to go into outer space, now that would be a great experience for a day!!! 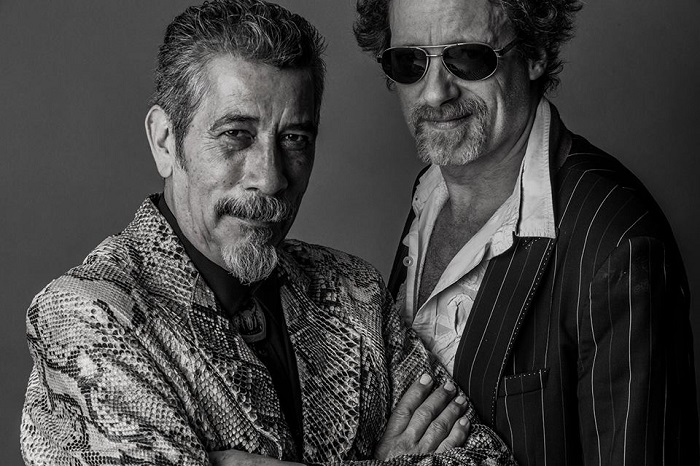