"I’ve learned that the music gives a voice to how I’m feeling about myself or the world around me. The blues gives meaning to my memories and life’s experiences."

Bringing crowds to their feet at the hardest to please and sophisticated night clubs in the Midwest, Reverend Raven and the Chain Smoking Altar Boys play traditional blues, straight up with a big dose of passion. With smoking grooves, served up with hot harmonica and smooth stinging guitar they play original songs peppered with nods to Slim Harpo, Little Walter, Jimmy Rogers, Billy Boy Arnold, Junior Wells and the three Kings. Born and raised on south side of Chicago, the Reverend has been playing the blues since 1971 when he first saw Freddy King play at the Kinetic Theatre in Chicago. After 15 year hitch in the Navy he moved to Milwaukee where he began a long friendship and collaboration with Madison Slim, long time harmonica player for Jimmy Rogers. Since 1990 he has opened for B.B King, Gatemouth Brown, Pinetop Perkins, Koko Taylor Band, Junior Wells, Billy Branch, Magic Slim, Elvin Bishop, Sugar Blue, Lonnie Brooks, William Clarke, Lefty Dizz, Rod Piazza, Fabulous Thunderbirds, Duke Robillard, Jeff Healy, Trampled Underfoot, Mike Zito, Tommy Castro and numerous others at festivals and at Buddy Guy’s Legends where he has been on rotation as a headliner for 16 years. 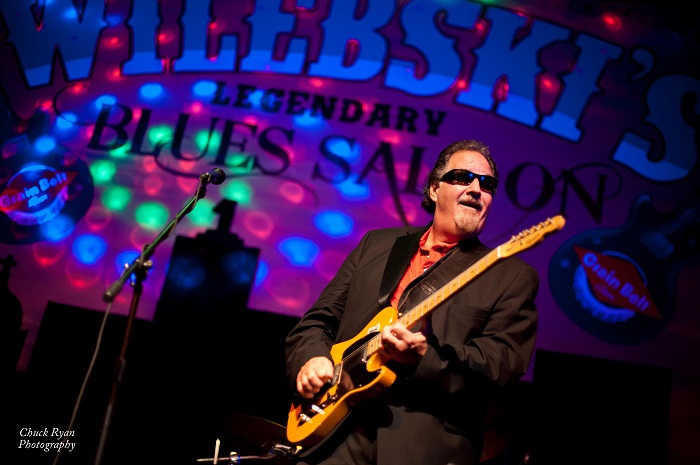 The Reverend was the Wisconsin Music Industry (WAMI) award for best blues band in 1999, 2000, 2004, 2005, 2008, 2010 and again in 2015. They also received the People's Choice Award in 2006, 2008 and again in 2010 and nominated Artist of the Year and best blues band of the year in 2011 and 2012. They were nominated for a Grammy Award in 2007 for Bamfest 2007. The band has been voted the Best Blues Band In Milwaukee by The Shepherd Express Reader's Poll in 2013 and 2014. Simply titled My Life (2017), the latest studio album from Milwaukee institution, Reverend Raven and the Chain Smoking Altar Boys, celebrates 20 years as one of the nation’s hardest working road band. The quartet of blues veterans, have played every tavern, gin joint and cool club in the Mid-West and Florida and enjoyed just about most of them.

Growing up on the Southside of Chicago in the 50s and 60s I was a young witness to the civil rights and anti war movement. My mother’s generation were pretty bigoted and it drove a wedge between us for awhile. My time in the Navy convinced me that we are all one race and that’s the human race.

Everyone contributes something to this great thing we call civilization, 99% of our music itself is a gift from the African American community. For me the fight is to keep the lights on and fight the darkness of hate and distrust that seems to be engulfing us.

I’ve learned that the music gives a voice to how I’m feeling about myself or the world around me. The blues gives meaning to my memories and life’s experiences.

How do you describe Rev. Raven & The Smokin’ Altar Boys sound and songbook?

We are a hard driving ensemble that play original blues over traditional grooves played with passion.

What is the story behind the name of the band?

I got the Reverend tag during my stint in the Navy. The sailors came to see one of the early versions of the band and asked for me. The hippies in the band at the time liked it and continued to call me that. We came up with The Chain Smoking Altar Boys one night sitting around the bar and riffing names. A few of us had been altar boys and it morphed into Chain Smoking Altar Boys. Years later I found out James Burton had a side project in Nashville with the same name. 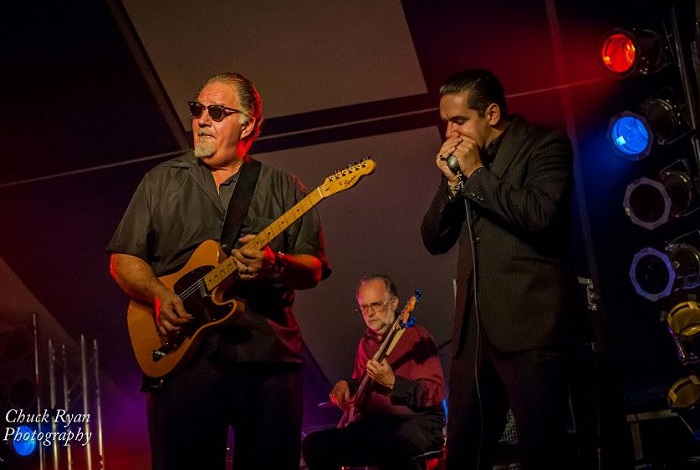 "A very impassioned free form dancer (I think it was dancing) at our gig last month. The guy was in his own world, all night (laughs). Doing a benefit for a friend last month. He’s going into hospice and performed at the show." (Photo © by Chuck Ryan / Rev. Raven, PT Pederson & Benjamin Rickun)

My mother always had music on in the house. A lot of Ella Fitzgerald, Peggy Lee, Sarah Vaughn and a Louis Jordan record. My older cousin started bringing home Muddy Waters and Howling Wolf albums and I was fascinated by the lyrics and stories of the songs. They were about adults and adult problems not teenagers in love etc…They were about lust, lol, heartbreak, jail and relationship problems. It all came to a head when I saw Freddie King perform in Chicago in 1971. After that I lost all my interest in rock music.

Meeting and playing with Madison Slim on and off for 10 + years. He was playing with Jimmy Rogers at the time and we started this band as a side project. He taught me how to present the band and myself and to play what we know. Don’t try and fit into someone’s idea of what we should be doing. After that, opening for and hanging out on the bus with B.B. King. The gracious and humble King of the Blues took the time out to invite us on his bus and just talk. It was great.

Be yourself, don’t sing about mules, roosters etc…if you never lived or worked on a farm. Don’t sing in fake voices and play and sing what you know. Less is more and turn your amp down. (Laughs)

How do you describe MY LIFE sound and songbook? Are there any memories from studio which you’d like to share?

It’s a record that documents my collaboration with different lineups and some great harmonica players that I’ve had the honor to play with. The songs themselves document my life from about 1974 when I was living at the Cedar Apartment Hotel (a well know flea bag hotel lol) in Chicago to the present. The best memory I have of all the recordings in watching Big Al Groth get so involved in his solos that he started dancing while he was blowing his sax, just like he does on stage. We had to stop and do another take because we were laughing so hard. 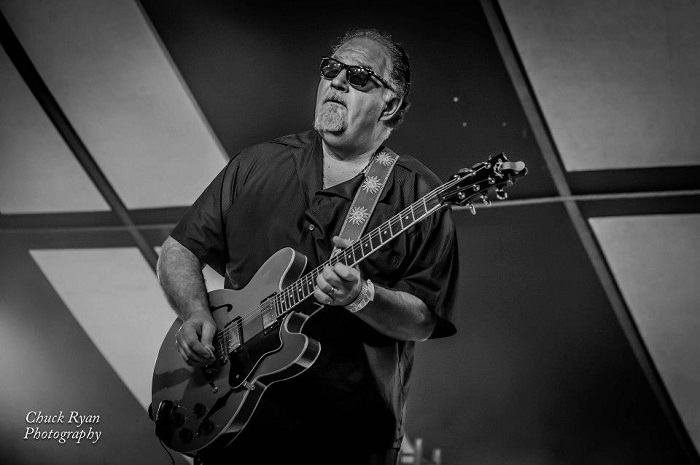 "It (Blues) is a gift from African Americans and it needs to be handled with care as you would any gift." (Photo © by Chuck Ryan / Rev. Raven on stage, 2012 Big Bull Falls Blues Fest, Wisconsin)

Had two gigs that Jeff Healey showed up at and sat in with us.  Incredible to hear and watch him play guitar from 2 ft away. He pulled off Albert King’s “Personal Manager” out and just nailed it.

Had a mild case of stage fright at Buddy Guy’s Legends when we opened for Gatemouth Brown. As I was getting ready to play, I look to the left and Buddy Guy, Otis Rush and Gatemouth Brown sitting in the VIP section watching us. I guess we were ok cause we still play there 16 yrs later

All the blues innovators and icons except for Buddy are gone. Miss going to the local club and seeing Albert Collins or Big Walter Horton or Junior Wells.

I hope that a young audience rediscovers the music. I play in Canada frequently and they have a younger crowd but here in the States, I fear we’re becoming the Polka bands of our generation. (Laughs)

Junk all the Karaoke machines in bars (laughs). They keep musicians from having decent gigs on Monday - Wednesdays. 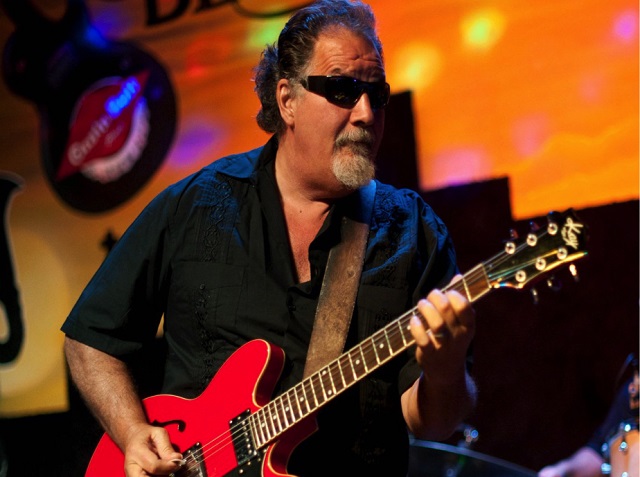 "Everyone contributes something to this great thing we call civilization, 99% of our music itself is a gift from the African American community. For me the fight is to keep the lights on and fight the darkness of hate and distrust that seems to be engulfing us." (Photo © by Chuck Ryan / Rev. Raven on stage)

Yes, life experiences and being aware of what people are saying and doing are a great source of song material. Write what you know about....

What is your BLUES DREAM? Happiness is….

Roadies!!!!! We get paid to drive and hump equipment.

What has made you laugh and what touched (emotionally) you from Koko Taylor, Junior Wells, and William Clark?

Koko Taylor: We opened for her at a festival in Wisconsin and watching her grill the guitar player who wanted an advance. Just like a MOM lol. She opened her purse and it was filled with cash lol.

Junior Wells: Billy Branch brought him down to the Up & Under Pub in Milwaukee when we opened for Magic Slim. Piano Willie or Jimi Shutte (drums) introduced me to Junior and without missing a beat he hugged me and planted a big kiss on my cheek lol...

and William Clarke: When I first saw him I was stunned. The opening number was an incredible high tempo swing tune. Alex Schultz and Zach Zunis on guitars too. He’s still one of my favorites.

Insecurity. It has through the years been a curse and a motivator to practice, write better songs and listen to other more experienced blues musicians. Madison Slim has probably been my best teacher personally in that respect. Slow down, grease it up, take your time and most of all be yourself at all times. 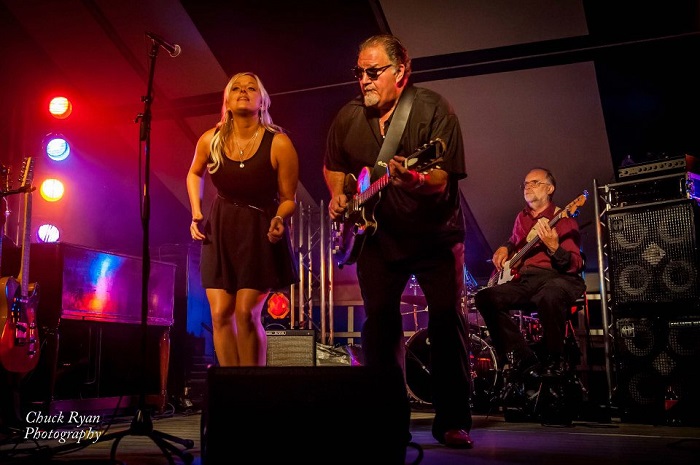 "Play the song, give 110% every night, has to have a groove and take care of your band, they will take care of you." (Photo © by Chuck Ryan / Rev. Raven & Sena Ehrhardt, Big Bull Falls Blues Fest)

What are the lines that connect the legacy of Blues from South to Chicago and from Midwest to beyond?

A very impassioned free form dancer (I think it was dancing) at our gig last month. The guy was in his own world, all night (laughs). Doing a benefit for a friend last month. He’s going into hospice and performed at the show.

It is a gift from African Americans and it needs to be handled with care as you would any gift. As to the rest…I think Willie Dixon said it best when he said “blues is the truth"

Mister Kelly’s in Chicago in 1955 to see Muddy Waters and his great band with Little Walter please.