"What I miss about music of the past is the musicianship, style and character of the musicians. Music relied less on engineers, over dubbing and electronic wizardry."

Gus Spenos is a killer sax player who fronts a monster big band outta the Indianapolis area. He’s one of those guys that has a velvety-smooth vocal delivery reminiscent of Louis Jordan and Louis Prima. His outfit plays a mean potion of jump-blues and boogie woogie, and he’s rarin’ to go with his debut, "If You Were Gold, Baby" (2016). Greek origin Gus Spenos - his parents emigrated in 1936 from a village near Tripolis (Silimna) - is a bluesman with the shouting style of some of the all-time greats who also has serious sax chops (and the day job of being a top neurologist in Indianapolis). On If You Were Gold Baby, Spenos and his big band prove they know how to lay down tracks that make listeners want to move and groove. 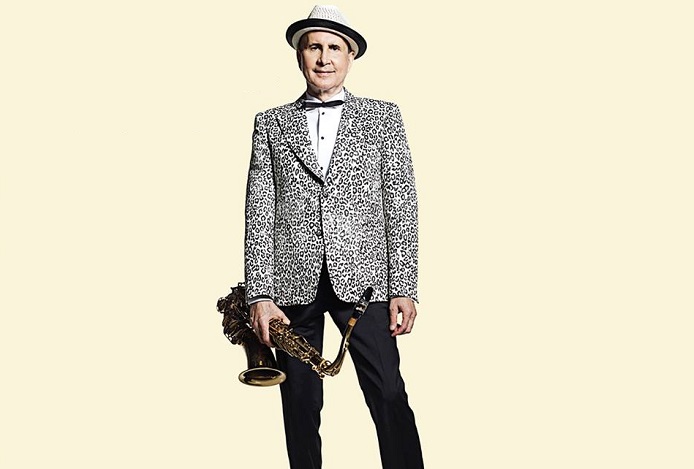 On a set that mixes classic-sounding originals such as the title track with a varied selection of carefully chosen standards, Spenos teams with eight-time trombonist of the year Wycliffe Gordon and legendary drummer Cecil Brooks III. Thelonious Monk vocal finalist Charanee Wade even joins Spenos in a duet as they unearth the old Jimmy Preston song “Rock With It, Baby.” A swinging, energetic combination of vocal tunes and instrumentals, If You Were Gold Baby is not strictly blues, though it's heavily influenced by the genre. Spenos plays finger-snapping, horn-heavy R&B with a touch of jazz on the album's 13 tracks, accompanied by an all-star lineup of performers. His new album "It's Lovin' I Guarantee" (2018), is Blooz, ballooz, blues, it don’t matter how you spell it, it’s jumpin’ R n' B from the get go. All star band, vocals, backup vocals, solos, hey it’s ALL there for you. Get lost then rediscover yourself in this genre that the Gusto is bringing back to the globe.

What do you learn about yourself from the Jazz/Blues music and culture? What does the blues mean to you?

I’ve never analyzed my connection to the blues in any formal way. You don’t set out to fall in love with the person you ultimately do fall in love with but rather chance events lead you to them. The blues was no different. When I listen to it, it sounds right and when I’m playing it, it feels right-that’s as far as the analysis goes. Sometimes you’ll meet someone and they are so easy to talk to that it seems as if you’ve known them for a lifetime. I felt the same way when I first listened to the blues as a teenager. I have studied the styles and technical skills of many blues musicians for long periods of time, not with the intent of sounding like them, because I can never be THEM, but with the aim that something I hear will trigger something better in me. It’s an odd thing that listening to others brings more of the ME out. Many times I’ll learn more from listening to other instruments than the saxophone. I’ve learned more from listening to B.B. King, both vocally and studying his guitar solos than many saxophonists. I never pressure myself to develop a certain skill but rather let that skill develop on its own.

The blues, although its form is simple, is in my opinion the most challenging of genre’s to perfect. Your solos must be lyrical, simple, “juicy” and sometimes “dirty” (intensely bluesy). The best blues solos are played with the fewest notes, the right notes at precisely the right time. This can be very intimidating! The blues can be happy, sad, fast or slow. Interestingly I’m happy even when singing sad stories of the blues, I think because when singing you always have a “cool” vibe and feel for it all.

What were the reasons that you started the Jazz/Swing researches and saxophone experiments?

My first link to music was listening to my father play his clarinet and sing Greek folk songs in our living room with other “amateur” musicians on just about every Saturday evening. My mother would sometimes sing with him too, which was real special. When I turned nine years old I asked my father if I could start playing his clarinet. He said yes. I practiced so much that I limited my dad’s playing time. He bought me my own clarinet eventually. I played clarinet in primary and secondary schools. I began taking piano and music theory lessons at age 14. I started singing in Rock and Roll bands, playing keyboard as well. When I started medical school I basically dropped out of society for ten years. I kept listening to blues however knowing that one day I would devote more time to it. After completing my training as a neurologist I settled into a clinical practice and one afternoon when I was driving I slipped a Red Prysock CD into the car stereo-“Hand Clappin’” came on and I must have listened to it twenty times in a row. That was it for me!! On the at a musical instrument shop on the way home and bought me a tenor sax, some reeds and a mouthpiece. I got home and started transcribing that tune. It’s been a love fest ever since that day. 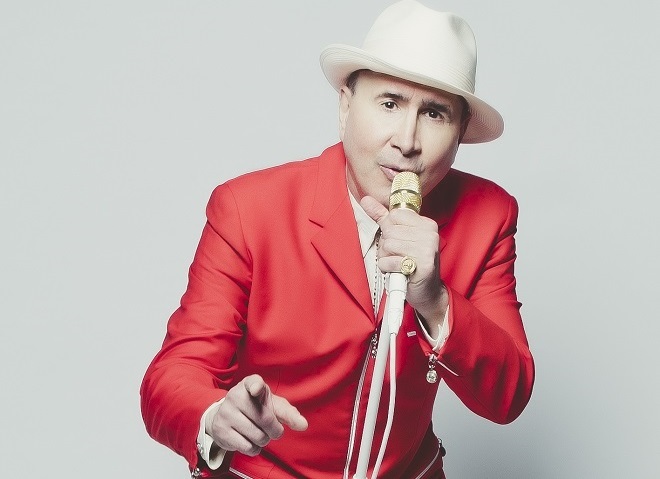 "My musical philosophy has always been and will always be-HAVE FUN-fun for me, the musicians and the audience. I don’t much care if I sacrifice commercial success for the fun of playing and making the listeners feel good."

How do you describe "It's Lovin' I Guarantee" songbook and sound? What characterize album's philosophy?

The cover tunes on “It’s Lovin’ I Guarantee” are those from an era(1940’s-50’s) when R ‘n’ B, Blues and Swing were still basically a single style. My originals were composed with this in mind. Notable features of this music are it’s raw and “let’s party” energy with tempo’s suitable for dancing. The philosophical message of this genre is to entertain- the kind that shakes the grind off of hard workin’ people who would gather in dance halls to make merry, carouse and dance through the night.

Are there any memories from "It's Lovin' I Guarantee" studio sessions which you’d like to share with us?

Memories from the recording are plentiful. Of course, performing with the level of talented musicians heard on this recording was immensely gratifying. However, the “hang time” following the session is always worth reliving. The storytelling, banter, and ribbing went on way past midnight.

Something unexpected will ALWAYS happen at a live show. Most recently the conga player was taking a solo and he was playing so hard that the congas fell off their stands-I picked up one, the trumpet and trombone player picked up the other two and all three of us held them up in front of him and he continued playing-the crowd went wild. I told him after the gig that maybe he should do that on every gig! Interestingly, some of the best times musically have been the fellowship that you establish with the musicians, talking and joking after the gig. Music has no social, economic, racial or religious barriers. 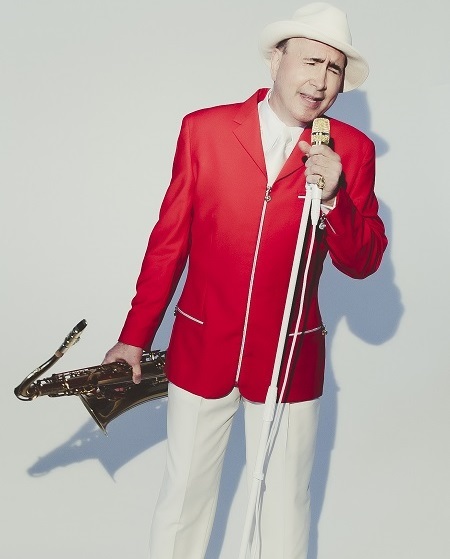 "The blues, although its form is simple, is in my opinion the most challenging of genre’s to perfect."

What are the lines that connect the legacy of Jazz with Blues and continue to Jump, Swing, and Jive?

Styles of music are best understood when representative examples are listened to, it’s difficult to find words sufficiently descriptive in my opinion. This brings to mind the time when a U.S. judge was unable to write his opinion on whether a film was indecent and he was quoted as saying “I can’t tell you what pornography is but I sure know it when I see it”. Well, here are some representative musicians of the styles in question: Jive-Louis Jordan, Cab Calloway. Jazz-Count Basie Swing-Chick Webb, Benny Goodman. All incorporate the blues in their playing. I listen to vocalists: Jimmy Rushing, Eddie Boyd, Jimmy Witherspoon, Duke Henderson to name only very few. Sax players: Jesse Powell, Lee Allen, Sam “the Man” Taylor, Red Prysock, Sil Austin to name just a very, very few.

What is the impact of Blues and Jazz to the racial, political and socio-cultural implications?

I never discuss political, social or economic issues in the same context as music. Be it said that I believe that right and wrong are written in the heart of every human being. I don’t believe in moral relativism.

If I could change one thing I would make people better listeners, cultivate an ear for music, which would make them more discerning in what they purchased.

What touched (emotionally) you from the sound of saxophone? What are the secrets of tenor?

The tenor sax always appealed to me because of its tone quality which for me immolated the human voice. The tenor is always “singing” to me. The trick of the tenor sax is to make it a part of your life, something that you can’t do without.

How has the Rhythm n' Blues and Jazz music influenced your views of the world and the journeys you’ve taken? 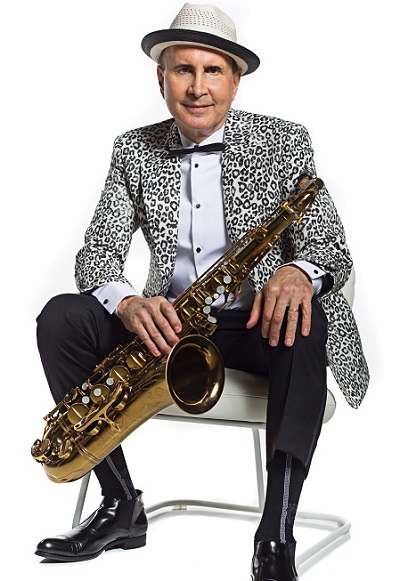 Although cliche’, it’s true, music is a language that links people worldwide.  Sure, you can’t help but learn about cultures other than your own when preforming in different countries but in the end, people respond much the same way regardless of where you are, especially to the blues. Surprisingly, I’ve also learned that each country has it’s own ethic form of the blues (i.e. Greek Rembekiko).

"Music has no social, economic, racial or religious barriers."

How do you describe Gus Spenos sound and songbook? What characterize your music philosophy?

My musical philosophy has always been and will always be-HAVE FUN-fun for me, the musicians and the audience. I don’t much care if I sacrifice commercial success for the fun of playing and making the listeners feel good.

No doubt, if I had time machine I’d love doing a gig, say with Wynonie Harris and play Lovin’ Machine or Tremblin’ or Gradma’s Playing the Numbers!!