Interview with multi-talented Josh Hoyer - respect and passion for Soul and R&B, woven into original sound

"The Blues is a platform for the human soul to air out all of its frustrations, joy and perspective on the human dilemma."

Josh Hoyer: The Soul of Shadowboxers

The Shadowboxers is a new project from famed blues town Lincoln, Nebraska. The band is headed by Joshua Hoyer and features a group of professional and seasoned roots musicians. Hoyer is part of the funk, soul and blues youth movement spending much of his time promoting the genres in Lincoln at the legendary Zoo Bar and beyond. Hoyer has been very in demand as a performer in his previous bands (Son of ’76 and the Watchmen, Electric Soul Method), as a solo artist behind the piano and as a session musician and arranger. Josh Hoyer and the Shadowboxers released their debut self-titled album (2014) and include some of the areas most revered and accomplished musicians, many of whom have toured the country with large bands, teach music and are asked to back up bands live and in the studio. The band’s sound and passion come from their deep respect, knowledge of and passion for blues, Americana, soul, funk, and many other styles of music. The material is mostly Hoyer’s original work, along with some choice covers that reflect Josh’s love of New Orleans music, soul and funk. Songwriter, singer, pianist, organist, and saxophonist Josh Hoyer began performing at age 8. A natural talent, his musical skill was developed in both school and church choirs and as a saxophonist in jazz and concert bands in Lincoln, Nebraska. In his mid-20s, Hoyer taught himself to play piano and quickly became a prolific songwriter and ultimately, a band leader. From mentors such as Magic Slim, Sean Benjamin, Jim Cidlick, and many others in the fervent Lincoln music scene, Hoyer learned musical and entertainment value of roots music. From Memphis to Chicago, New Orleans to Detroit, Hoyer has studied the various forms of Rhythm and Blues. Also, as resident of New Orleans and the Pacific Northwest, and as a traveler in his early 20s, Hoyer was exposed to all of the finest music America has to offer. He has played as a sideman on horn and piano with Magic Slim and toured briefly with EC Scott. As a talent buyer and bartender at the world-famous ZOO Bar, he has had the opportunity to listen to and play with many of the finest roots outfits touring the country over the last decade.

I have learned that there no human emotion that cannot be expressed through music. The Blues is a platform for the human soul to air out all of its frustrations, joy and perspective on the human dilemma.

How do you describe Josh Hoyer sound and progress? What characterize the Shadowboxers philosophy?

Josh Hoyer and The Shadowboxers are all about exchanging SOUL with the PEOPLE. When we check our egos and troubles at the door for a concert, the listeners and musicians sign an informal contract to make those moments to be an awakening, a transcendent experience that allows us to embrace our finer nature as we spin through space.

Our sound is a combination of borrowed elements from all great American Soul and R&B, woven into original sound by true and skilled musicians that are willing to put their heart on the line night in and night out. 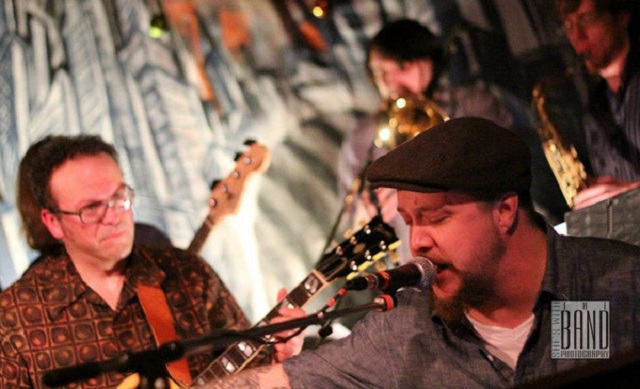 "Talking with musicians from past eras, it is obviously harder to find good paying gigs and a receptive audience these days. I guess I am a stubborn and a glotton for punishment!"

I draw inspiration for songwriting through every facet of my life. Whether it be love, family, work, attentiveness to social issues of the day or hearing stories of others experience, I am constantly thinking in terms of music. That is my best way to express how I feel about all facets of life. If I am touched by an idea or story, there certainly is way to make it into a song.

Like all of us, I feel I have led many lives within the framework of my 37 years of life. Right now is always the most interesting- and at this time I am blessed to raising 2 beautiful daughters and married to a lovely and supportive wife. I have always loved music and have been working at my craft for decades, first performing at the age of 4. But just in the past couple months have I decided that being musician is the only righteous path for me. It is a scary proposition in today’s music business climate, but this is the only way I can look myself in the mirror and know I am doing the right thing.

Playing with mentors Magic Slim and his brother Nick Holt will always be among the most memorable experiences for me. They lived and breathed music and I felt a kinship to them that was unbreakable. Nick was a great singer and he taught me how to sing, saying “don’t give em too much at first, you gotta ease in. Then once you got em, bring to their knees.” Followed by, “I love you boy.” And he smiled his usual knowing smile- that makes me smile for sure.  I have had countless jam memories with hundreds of players, that when we all were listening to each other and serving the song, that we reached a pinnacle of energy and felt we could do no wrong. That is the best feeling in music: when a group of players all are equally serving the song, and that moment seems to be bigger than life itself. That is powerful stuff! 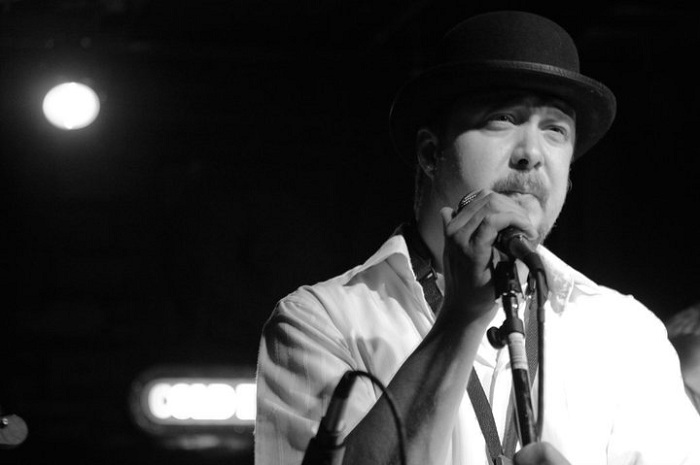 "All good songs have feeling. The sound projects a unique human experience that the players are able to convey to the listener."

Magic Slim told me that playing music ain’t about you; it is about the people listening to you. Always serve your crowd and pay attention to what makes them happy. Best musical advice I ever had.

EC is one of the hardest working musicians in the business. She built her career with the sweat off her brow and did it all on her own. She was no bullshit. We played a gig in Rockport, Maine and she told us the van was leaving at 10am. Moto Makino, the guitarist, and I showed up at 10:02am and the van was gone. I called her and she said we could walk to the café for breakfast. 4 miles later, with gear and luggage in tow, we finally arrive and they were done eating. She said, I guess you won’t be late for the van again, huh? You can grab breakfast at the gas station. Damn! The woman is no bullshit. But she is also a great and loving woman!

I think there is a lot of great music out there today. Maybe too much! The thing I DON’T like about the current music scene is solo artists that play a computer (DJs), you just CAN’T get the same powerful feeling from a computer that you can from actual human beings playing IN THE MOMENT. The other thing that scares me is the lack of interest in EXPERIENCING live music from a lot of youth. The number of times I have seen a killer band playing to 5 to 10 people is too numerous to remember. So many factors have played into this, including the increasing number of entertainment options, the revolution of the digital culture where people experience life more through a screen than in the company of other human beings, the dominance of corporate radio and TV that keeps many fresh and beautiful ideas out the mainstream, and the sports culture that dominates America’s free time. Talking with musicians from past eras, it is obviously harder to find good paying gigs and a receptive audience these days. I guess I am a stubborn and a glotton for punishment! 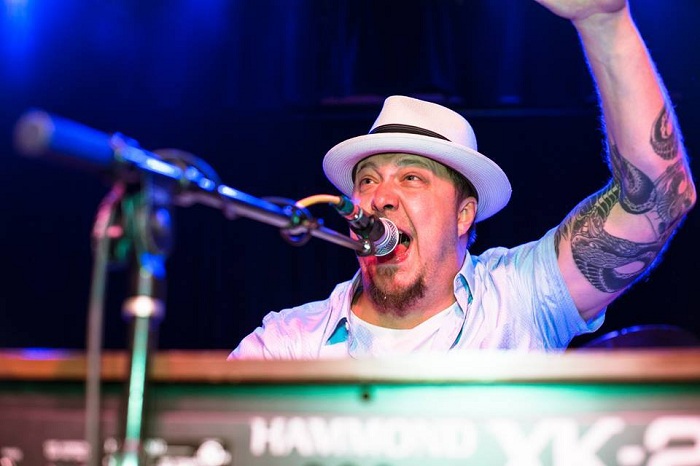 "Magic Slim told me that playing music ain’t about you; it is about the people listening to you. Always serve your crowd and pay attention to what makes them happy. Best musical advice I ever had."

I would say that mainstream exposure to all the great music that exists under the dark cloud of corporate radio is the most influential change that could occur. Pop music today is the dumbest it has ever been.

What has made you laugh lately and what touched (emotionally) you from local blues scene?

Most musicians are characters, and my phone is full of musicians. These are my friends and we have a great time doing what we love to do. I laugh all the time with my bandmates and fellow musicians. Lincoln, NE has a tight family of players- whenever one of our clan is ill or passes away, we come together and celebrate their life through song. It gets me every time. I am thankful to be close with so many great people.

What are the lines that connect the Blues with Soul and continue to Americana and R&B Funk music? 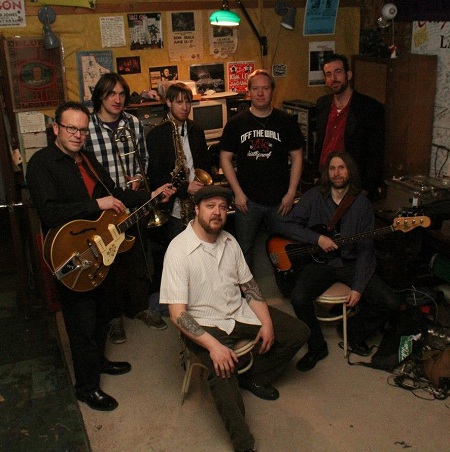 That’s really a tough question. I think I would use that chance to be a bit of a super hero. There are so many villains in our history that have caused so much suffering…I think I would have to take a young Hitler out to the country and make sure he never come back- but who knows, maybe he just needed a friend. Skip that, I’d want to have conversation with Jesus, so we could once and for all, get the story straight from the most influential man time has ever seen…but I’d demand to bring an iPhone to record it so people would believe me….and it’d be really great to be on 52nd Street with Bird, Monk and Miles for a night…or in a car burning down the highway with Kerouac and Cassidy…this is an impossible question….

Josh Hoyer and the Shadowboxers - Home