"Every country in the world has the Blues. Every country plays the music that might not sound like the blues in the USA but in that country it is their Blues." Tali "Icepack" Jackson is the glue behind this gumbo of Klyph, Charles Neville, Arno Hecht, Terrance Simien and a high caliber supporting cast. Somewhere between blues, groove, soul and rock; it is the definition of "cool." The album is a wonderful eclectic mix of rock, soul, blues and more by some of eastern Long Island's most talented musicians. They are joined by many industry heavyweights who add a special flavor to an already exciting mix. “BK2SQ1” is a great dedication to the Blues. "Icepack" details in each word, note and lyrics what the blues is about.

Blues music is UNIVERSAL in any language and is heartfelt despite the language barriers.

Do you remember anything funny from recording time with Melvin Van Peebles and John Herald?

I remember the legendary Melvin Van Peebles standing in the middle of a roomful of musicians conducting like we were recording a symphony.  His son Mario van Peebles sang also. It was a ton of fun and the man is a true genius. I hope to have Melvin on my 2nd cd 'BK2BIZ' back to biz.

John Herald R.I.P.  was a prankster, very funny and an amazing singer, songwriter, storyteller and acoustic guitar player. For 2 straight summers we opened with John Herald at the geodesic dome in Montreal, Canada for some of the originators of the blues. Piano players Lil Brother Montgomery, Sunnyland Slim, Roosevelt Sykes, Lionel Hampton (vibraphone, drums) and many, many others. What an honor and learning experience. 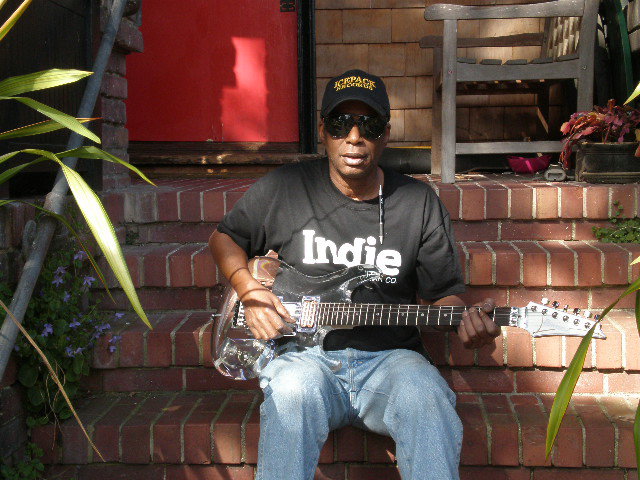 "Blues music is UNIVERSAL in any language and is heartfelt despite the language barriers."

Probably the late MICHAEL BLOOMFIELD in California and BOB MARLEY after meeting him at Max's Kansas City in NYC where the band I was in the TIDBITS was the original house band.  BOB MARLEY, myself and a French soap opera TV star jammed all night and into the next day at a friend's loft.  He was the most spiritual person I’ve ever met in my life and remained a close friend until he passed in 1981. The TIDBITS album and singles released in Europe can be found at GEMM an European company that specializes in rare vinyl from all over the world.

Backing up the WILD TCHOUPITOULAS and NEVILLE BROTHERS at Mardi Gras in New Orleans. That was truly an experience.

Meeting Bob Marley, Dr. John, working with the Wild Tchoupitoulas & Neville Brothers, Bob Dylan, the Monkees, Will Lee bass player on the David Letterman show and many many others.

As far as advice, I learned from Herb Abrahmson, one of the original founders of ATLANTIC RECORDS was that you don't need a state of the art studio to get great sound and I learned on my own not to overplay but to play behind whoever is leading the song.

Are there any memories from Rick Danko, Charles Neville and Harvey Brooks which you’d like to share with us?

Rick Danko was a mad man but a very solid subtle bass player.

Charles Neville is my idol. Charles and Harvey Brooks are both very businesslike but funny and they take their music seriously but have a good time. 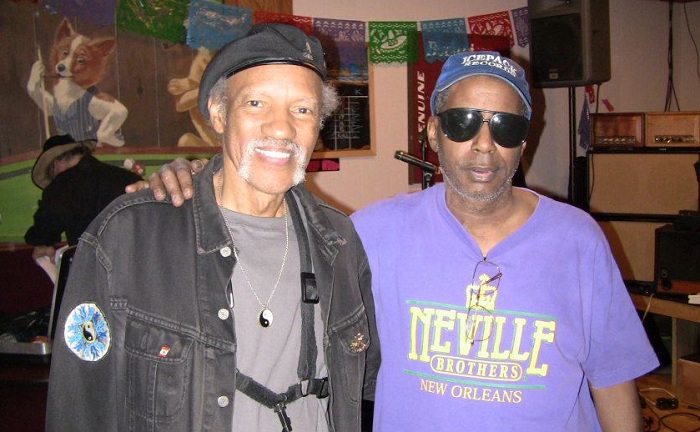 "The change to the blues for me is the fact that people think that the faster they play guitar, the better they are." PHOTO: ICEPACK & CHARLES NEVILLE

What are the lines that connect the legacy of Blues with Soul and continue to Jazz, Reggae and beyond?

They all kind of intertwine Blues and Jazz are just different kinds of blues and soul came along and is basically blues with more of a backbeat that was then incorporated back into blues. Reggae and Ska started as of the islands and Toots and the Maytals, Bob Marley and Jimmy Cliff brought Reggae to the world.

How close are Bob Marley’s songs to Blues culture?

Reggae is blues. Like I said Bob Marley and all the other reggae leaders played their version of the blues called Reggae.

Someone told me that Reggae was developed from the island musicians listening to the blues and soul radio stations on the southern coast of the USA and off shore pirate stations and the reception was so bad that the way they heard it through all the static and fading in and out is how Ska and Reggae came along.

I used to listen to a station far far away and what I heard was different from what was really being played when finally I heard it on a good system.

Which memory from Bob Marlley makes you smile?

The look on his face when he tapped me on the shoulder at Max's Kansas City.

The Tidbits had just returned from recording in Jamaica and I had my Rasta hat on and he walked up and tapped me on the shoulder and i turned around and looked and my jaw hit the floor.  He would call me evertime he came to San Francisco and I would visit him at his motel room and then go to the shows in the area on the bus with the band.  At one time I saw them 10 days in a row 2 shows a night and every show was unbelievable. Plus he always had a big bright charismatic smile on his face. Like I said the most spiritual person I have ever met. The Neville Brothers are the same way. 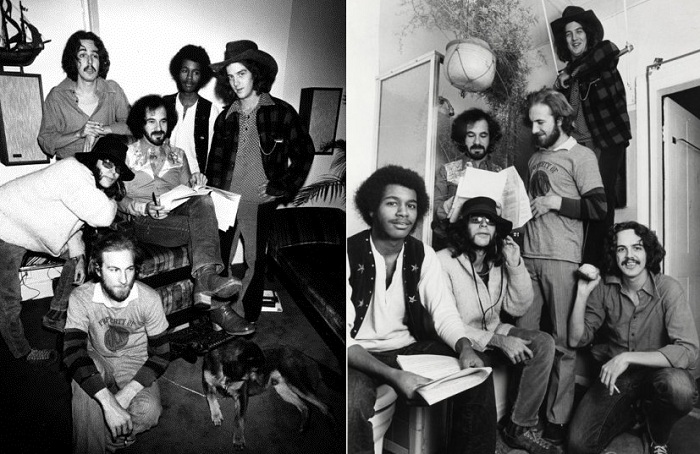 "Reggae is blues. Like I said Bob Marley and all the other reggae leaders played their version of the blues called Reggae." PHOTO: ICEPACK AND THE TIDBITS

Nowadays the club owners all claim that they are broke and want to know how many people you can draw into their club. If the past you could walk into a club ask for a gig and get paid a fair amount of money.

How has the blues changed over the years?

The change to the blues for me is the fact that people think that the faster they play guitar, the better they are.

Like reggae which is a different form of Blues, the object is to leave space for someone else to play.

What's the legacy of Blues in the world culture? What are your hopes and fears for the future of music?

Every country in the world has the Blues. Every country plays the music that might not sound like the blues in the USA but in that country it is their Blues.

Which memory from Bob Dylan and Mike Bloomfield makes you smile?

Just the fact that I was asked to play with both of them was quite an honor and that makes me smile.

Who started the idea of Icepack Records?

In the early 1990s I was playing in a band called the mojos on Long Island, New York and I was playing with 2 sprained shoulders and the lady cook would come out and put icepacks on my shoulders as I was playing and the owner of the restaurant was also the lead guitar player turned around one night and said ' your nickname is icepack and it has stuck ever since. 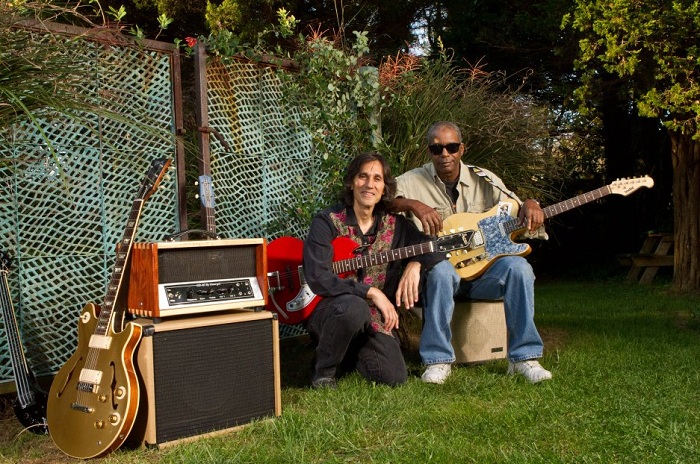 'BK2SQ1' stands for back to square one which is what I was doing when I recorded the cd of that name. Going back to my roots and it was my first attempt at digital recording.

How important was New York’s multiculturalism in your life and music? How does that affect your inspiration?

At a young age growing up in New York City for a time we lived in a black and Latino section on the upper west side and on hot and humid nights, everybody would be on their front steps blaring their radios because it was too hot to be in their apartments with no air conditioning. Later on in New York City, there were so many clubs, you could walk into one club and hear a different kind of music and another club and hear something completely different. Later on when my family moved to almost the end of Long Island New York, around 1963, a local radio station also started up and that's when I was truly hooked. They would also sponsor 'battle of the bands' which kept us out of trouble most of the time.

I would love to have hung out with Jimi Hendrix and still would love to meet Keith Richards, Ginger Baker, Chad Smith of the Red Hot Chili Peppers and Charlie Watts. 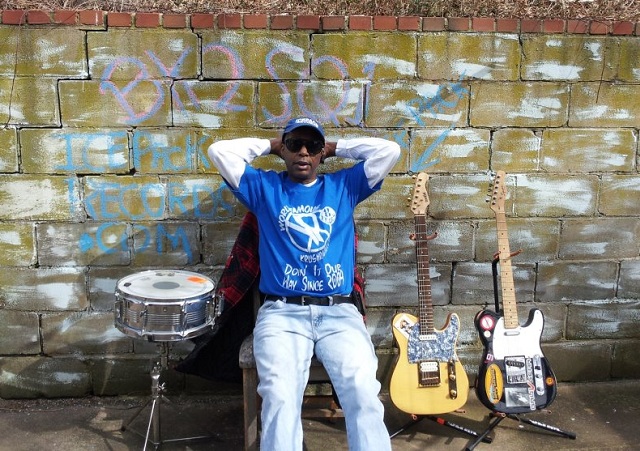