"I miss analog recorded music, I am excited for the future of music, I have seen it progress since 1950 personally. So this is just another wonderful chapter in the history of music."

Legendary King’s X frontman dUg Pinnick joins forces with EMMY Award winning blues rockers The Bihlman Bros. for a musical pilgrimage that unites blues and rock in glorious soul revelry known as Grinder Blues. After collaborating together on production music for film and TV, the songwriting team of Pinnick/Bihlman/Bihlman has expanded the scope of the project into a sonic chef d’oeuvre guaranteed to satisfy the most discerning musical palate! The self-titled debut effort, Grinder Blues is a tidal wave of grit, soul, and power. Grinder Blues is: dUg Pinnick – Vocals/Bass, Scot Little Bihlman – Drums/Percussion/Vocals and Jabo Bihlman – Guitars/Vocals 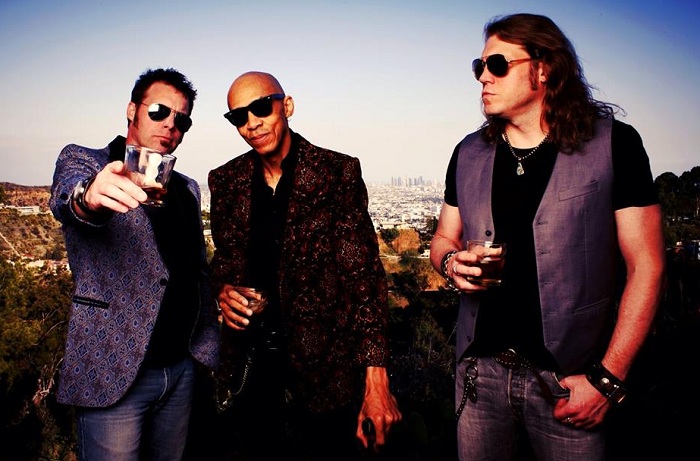 dUg Pinnick is a revelation on vocals, digging deep into his number one soul brotha vibe. And of course, his signature bony bass tone is as hard core as ever. Scot “Little” Bihlman on drums. percussion. and vox. brings a heavy groove, pushing air through musical genres like a steamboat rolling down the Mississippi. Jabo Bihlman on guitars and vox, brings a heavy tone with surprisingly subtle nuances of traditional blues combined with searing, down and dirty lead work.

dUg: I was born in 1950 just outside of Chicago Blues Movement happened. I remember hearing all the great blues players because my relatives would buy all the records that were coming out then. I was getting it as a little boy first hand.

Scott: SOUL! I have been enthralled in the blues my whole career. I have gotten to witness things from the masters that have sculpted who I am as an artist today. As a player/educator, and session musician it's all about click tracks, and playing along with sequencers. The blues thought me how to let go, and playing straight from the heart. In blues it's about pushing air, and move energy like a heartbeat. "if it's not breathing it's not alive".

Jabo: I learn that at the end of the day, we are all living the human condition. We all suffer. I've got problems, you got problems, everybody has problems. Some worse than others. Blues is an outlet for that pain, a cleansing of the soul. Get it out and move on. Not all blues is sad though.  I love the happy, joyous, raucous blues too.  Some of the old Ray Charles stuff hits me like that. "Sun Gonna Shine Again" is one of my all time favorites. I think SRV brought some happiness to the blues as well. Without blues, there really is no other form of contemporary music. Blues is the mother of it all.

How do you describe your sound and songbook? What characterize your and Grinder Blues band’s philosophy?

dUg: We wanted to make a blues based record that was traditional, but twisted, with typical blues lyrics but also with a twist, and make sure it sounded like we were having fun.

Scott: BIG, AND AGGRESSIVE. I like to hit the drums! I like big punchy sounds that makes a statement. PHILOSOPHY -I always play for the song, not for myself. I'm not out to impress other musicians. In the end it's all about songwriting, and emotions. Giving people an experience is what I try to accomplish.

Jabo: My sound is basically a rock tone. I love the distortion. For Grinder Blues, it was very heavy. We also tuned down to C for most of the record, which is why it sounds so massive on the bottom end. For the clean stuff, I love the chimey bell tones of a single coil pickup.

Stick with what works, with what people like. Then give it a little twist. 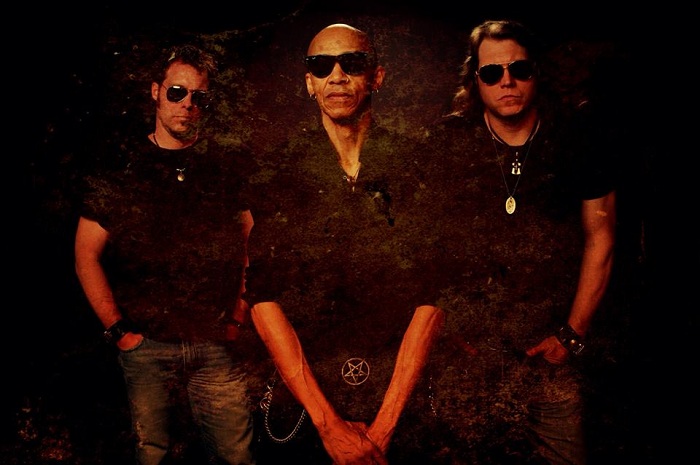 "We wanted to make a blues based record that was traditional, but twisted, with typical blues lyrics but also with a twist, and make sure it sounded like we were having fun."

dUg: I once Jammed with members of Sly and the Family Stone - my favorite band. My most memorable gig was playing Woodstock 94 with King’s X.

Scott: I played the White House with Son Seals. Private jets/limousines/dinner with the President, and an awesome picture in the Rose-garden to hang on my wall. That's hard to beat! Obviously hanging out with BB King, Ray Charles, Buddy Guy, Billy Gibbons, and a slew of other people/players have been an important experiences on all levels!

Jabo: Human connections and relationships are everything in this business, every business really. Arlo Chan at Warner/Chappell, Missi Callazzo at Mega Force, Jim Gaines, are some of the ones that stand out. Meeting and working with dUg Pinnick, who has been one of my musical heroes throughout my life, has certainly been one of the great treasures of my career.  BB King is probably the nicest and most genuine person I have ever met. A true sweetheart. One of my great memories.

dUg: My cousin told me when I was 17 that “it’s a terrible thing for a Man to do the thing he does not want to do for the rest of his life” So I decided to do what i wanted for the rest of my life.

Scott: Be humble, be patient, be persistent, and always FEED YOUR SOUL.

Are there any memories from Miles Fulwider and Carmine Appice which you’d like to share with us?

dUg: Miles is a great Engineer/producer and a pleasure to work with.  What’s Carmine got to do with Grinder Blues? He’s a good friend and a bad ass drummer though. I sang on his Guitar Zeuss about 20years ago. 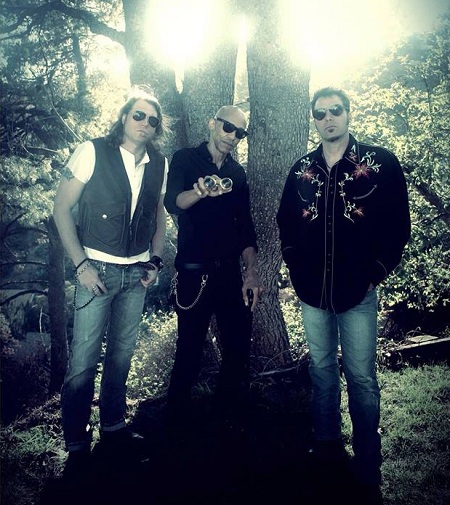 Scott: It's been awesome working with both of these gentlemen. Very different approaches, and there's more then one way to skin a cat. Miles is a straight shooter, and very open to new ideas. It has been a pleasure having that kind of musical freedom, along with a good friendship. With Jim you go with his lineage, and Grammys. They're both great guys, and it's been an honor working with them.

dUg: I miss analog recorded music, I am excited for the future of music, I have seen it progress since 1950 personally. So this is just another wonderful chapter in the history of music. They all are great because we never stopped pushing the envelope, no matter how much people resist change; it has to come, because if Music isn’t changing then it will become stagnant. Thank the gods for innovation, you might hate it but you can’t stop it.

Scott: honestly I don't miss much. I think there has been some really good records put out lately that complement the past.

The future of what....what? The suspense is killing me!  Is it the steak I'm marinating right now? Because my hopes for that are that it will go great with some brussel sprouts and a delicious microbrew! dUg: Have MTV 25 hour videos,, that’s where we all heard everything in the 80/90’s, and rock radio that played what they wanted.

"I was born in 1950 just outside of Chicago Blues Movement happened. I remember hearing all the great blues players because my relatives would buy all the records that were coming out then. I was getting it as a little boy first hand."

What are the lines that connect the legacy of Blues with Soul and continue to Hard Rock and Rock & Roll music?

dUg: It’s a blur to me, I have embraced it all.

Scott: With thespians there is always something to laugh at. We are all theatrics, and narcissists striving for fortune, and fame. Whether we like to admit it, or not. That's humorous!

Jabo: I met some amazing, beautiful and interesting people on our last European tour. It's always the people that make it all worthwhile.  Stephen Colbert and my kids are always good for some laughs!

dUg: I’d love to go back to September 3rd, 1950 and spend the day watching my Mom’s day of my birth.

Scott: well keeping this lighthearted, and not trying to change history. I would have liked to have seen the late 60s early 70s musical movement. Looking back from what I have seen it's possible that might have been the cream of the crop.

Jabo: Hmm, that's a tough one. So many important historical moments! Quite possibly the room where beer was invented.  Or maybe, follow Nikola Tesla around for a day when he was working in Colorado. No, I'd have to say I'd like to go back and be in the control room in Houston when Neil Armstrong took that first step onto the moon. What a thing to have been a part of, to witness the energy in that room. It had to be a living thing! The triumph, the drama, the collective sigh of relief...amazing. 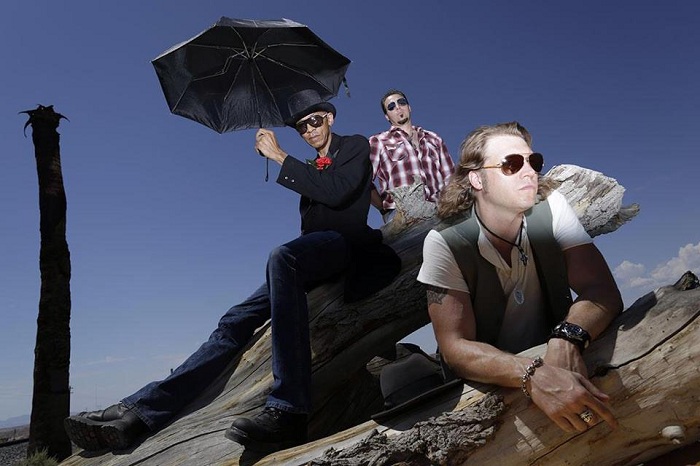