"There are indeed some lines that connect Blues from US to Romania. In what we call old traditional Romanian music we really have similarities: message, rhythm, balance, somehow the same story of people bondage."

Born in Bucharest, Romania, George Baicea discovered music and the guitar at the age of fourteen, listening to Jimi Hendrix's records. Since that moment, he dedicated his life on trying to improve his guitar techniques, listening to the great masters: Jimi Hendrix, Stevie Ray Vaughan, Frank Zappa, Mike Stern, Miles Davis. In 1992, George was discovered by Alexandru Andries, a very famous performing songwriter in Romania. He started composing in 1995, but released his first album "Prins in traffic" (Caught in Traffic, 2000), followed by "Trafic Greu" (Heavy Traffic, 2001), nominated at the Romanian Musical Industry Awards, category "Best Jazz-Blues Album". In 2000, George started his own band, George Baicea Electric Blues Band and he had concerts in several clubs. In 2001, George Baicea composed the music for the movie "Incidentul Ankara" (The Ankara Incident).                    Photo by Vlad Eftenie 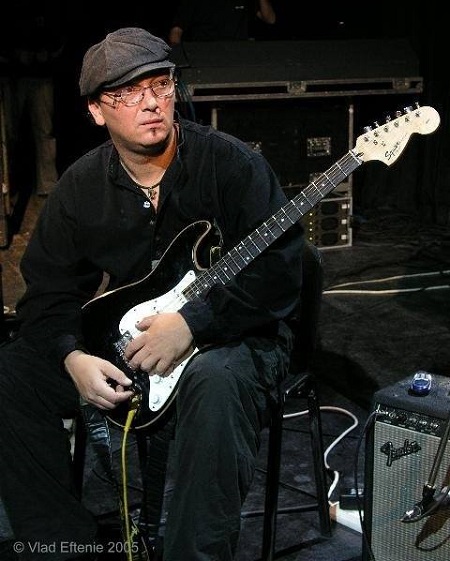 In 2004, he participated at the International Blues Festival, Bucharest, where he met the international-known bassist Steve Clarke, and they started a collaboration. So, in June, 2005 George released his second album, "Cinderella", with Steve Clarke on bass. At the end of 2005 George Baicea Electric Blues Band participated at various Jazz and Blues Festivals. In December 2006, George Baicea had a series of concerts in Germany and Holland. In November 2008, George Baicea released his third album, "Vintage Stories: Jamming in Germany", a live CD recorded in Germany. George Baicea opened for John Hammond, Eric Sardinas, and Coco Montoya. George Baicea is member of the Romanian Composers and Musicologists Association and the Author's Rights Association (UCMR-ADA). 2010 was the year in which George Baicea reached a superior level of recognition of his talent and mass-audience awareness: a-part of dozens of club performances, he launched the first Romanian Blues DVD, "Stealth - Made In Romania", at A&A Records, was the star with his Electric Blues band of the first edition of "Hendrixperience" Festival held in the Danube Delta and was the only Romanian guitar player selected to open for Steve Vai concert, at Polivalenta Hall.

What do you learn about yourself from the Blues & Rock culture and what does the blues mean to you?

Most of all I learned that you can be free and you can have your own state of mind based on soul, light and freedom through music.

How do you describe George Baicea sound and songbook? What characterize your music philosophy?

I describe it more in blues-rock area that because I grew up and liked with many musical directions - blues, rock, jazz, funk – and because of that my songs include stylistic all these musical genres. In live performances we have a lot of moments of free improvisation and interplay what makes each concert unrepeatable. I never agreed the idea that the sound is the only a matter of choosing your gear. I grew up with sounds of Hendrix, Zappa, Santana, Jeff Beck, David Gilmore, Stevie Ray Vaughan and so on. But in particular my world of sound is (at least I hope) somewhere between Hendrix and Stevie Ray Vaughan. I always thought that your sound must be the sound of your own soul and has to be your other option for communication beside your voice. So, combining your guitar sound with your self-expression coming from your technique, you can develop your own musical language to communicate with, which, from my point of view, is more powerful than words. 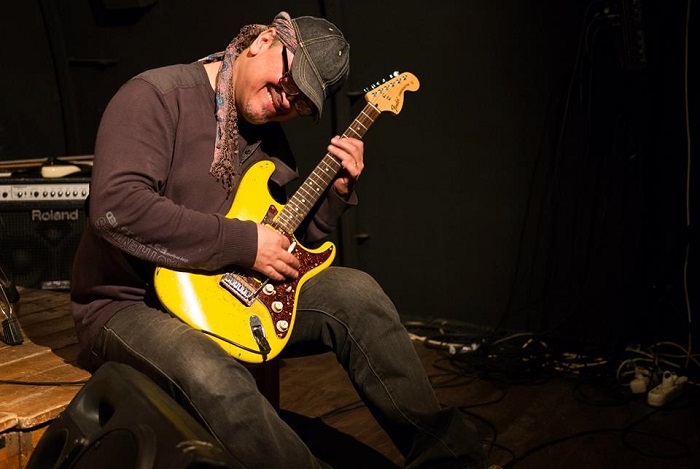 "Blues in Romania struggle between life and death, like Frank Zappa said: Jazz and blues are not dead, but just smells funny" (Photo by Andrei Todea / George at Green Hours, Romania 2015)

During the time, I’ve met many gifted musicians, from whom I’ve learned a lot and their experiences and philosophies shaped me, but one of them was defining. On my CD “Cinderella” I worked with an American bass player, Steve Clarke, and during recording sessions he stayed at my home in Bucharest and we had only ten days to finish the CD, during which we faced various technical and financial issues. All that time his attitude was always calm and peaceful. Once, I asked him: “How can you be so relax with all this problems?” And he looked at me with his peaceful eyes and said: “George, have Faith!” No other explanation. More than that, the CD was finished earlier than scheduled plus, one of the best songs was composed, played and recorded at first sight, there, in the studio. “At first sight” is the name of the song. At the end all things worked out well (unexpected) and then I understood what he meant. That was a great lesson about life and music beside many others that I’ve learned from him at that time.

I was lucky to be opening act for Coco Montoya at Hard Rock Café in Bucharest. The place was crowded and we played about 30 min. The crowd was waiting for him and when we finished they barely applauded us. We didn’t have a problem with that and left the stage, but when Coco Montoya went on stage he took me with him and said to the audience: “This guys are good, so you have to give them the applauses they really deserve” and he applauded us together with the crowd. That was something for me!

I really miss a lot that attitudes of musicians from the past because now most of them play for glory not for music. I don’t have fears regarding the future, I just hope to be able to enjoy playing as much as I can, with all ups and downs coming from it. "Most of all I learned that you can be free and you can have your own state of mind based on soul, light and freedom through music." (Photo: George at Frankie Club Caffe / All rights reserved)

The only thing I would change is that the value of any artist must be judge after his artistic level, not after his manager skills.

Make an account of the case of the blues in Romania. Which is the most interesting period in local blues scene?

Blues in Romania struggle between life and death, like Frank Zappa said: “Jazz and blues are not dead, but just smells funny”.

What are the lines that connect the Blues from US to Romania? Are there any similarities between the blues and the genres of local folk music and traditional forms?

There are indeed some lines that connect Blues from US to Romania. In what we call old traditional Romanian music we really have similarities: message, rhythm, balance, somehow the same story of people bondage.

One thing that always make me laugh is that every time we are invited to play in different jazz and blues events, the organizers don’t have enough money for musicians, but they have a lot of money for theirs and others protocol. And I have to admit that I’m also emotionally touched by this “people who like this kind of music” situation.

What is the impact of Blues, Rock and Jazz music to the racial, political and socio-cultural implications?       Photo by Andrei Todea I think that this musical zone offer an alternative to commercial music, to those songs that easy go on top and die tomorrow. On the other hand, my personal opinion is that Rock, Blues and Jazz music will always carry a message, but comparing with the ‘70s period, in 2016 the impact is not the same.

"I really miss a lot that attitudes of musicians from the past because now most of them play for glory not for music."

That’s the most difficult question because I have too many answers, but OK: I’d like to be in 1970 at the concert “Jimi plays Berkeley”.