"I believe that when humans first found expression in music, melancholia has always been around in the earliest music forms. And these forms, be they from India or Africa or China or elsewhere, predated blues music by literally, thousands of years."

Kelvin Ng is a Singapore harmonica player and member of Skunk Jive, a funky and rootsy blues band. Kelvin has opened for Robben Ford and shared the stage with various international blues and roots acts. Having performed with local music legends such as Jeremy Monteiro, Rex Goh and Siva Choy, he frequently fronts The Blues Machine, houseband for the famous Crazy Elephant bar in Singapore. As the only Singaporean to officially endorse Hohner harmonicas, he has also recorded harmonica for Mandarin pop superstars such as Jacky Cheung, Stephanie Sun, Eric Moo and Na Ying. With a powerful yet musical harmonica style, Kelvin Ng is acknowledged as a master of blues harmonica by his peers. Coupled with a strong and soulful voice, he is recognized as a major blues talent in Singapore and the region. 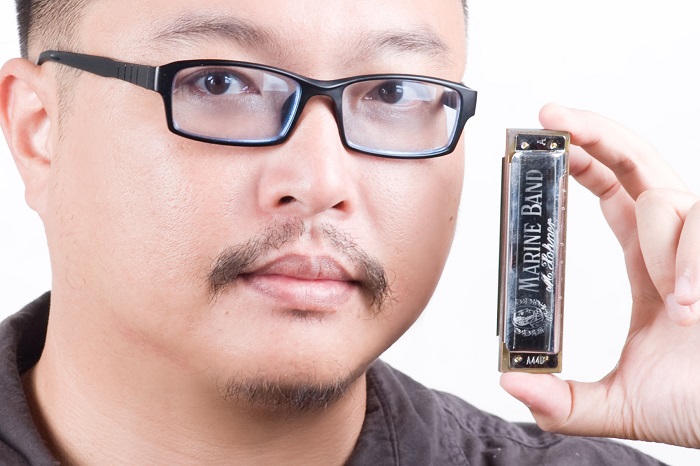 While he understands the nuances of the blues deeply and is often steeped in tradition, he and his band Skunk Jive are constantly exploring new rhythms and sonic textures to create fresh and original sounds. Enthusiastic about performing live, he has shared the stage with various international blues and roots acts such as the Holmes Brothers, Harry Manx, Enrico Crivellaro (Italy) and Dom Turner (Australia). Known as 'Smokey' in music circles, he has performed with Singaporean music legends and popular local bands. He played on the theme song for the local Chinese TV series “Toa Payoh”.

I am still constantly learning things from the blues, even after listening to it and playing it for more than 20 years. There are a lot of hidden truths in the music from the blues masters and you just kind of realize them gradually over time, at different points in your life. The few big lessons are about resiliency, improvisation and realism. Resiliency, for the simple fact that blues is really all about survival – I mean, when you really look at how early blues music came about, it is the soundtrack accompanying, or in many instances, the actual documentation of the lives of African-American people in the deep south back then. About how they survived and how some even thrived, despite the circumstances. A lot can be said about this point but the short answer is: The blues is about facing and coping with adversity. And about being dead bent on having a helluva damn good time despite the odds being stacked against you. It more than teaches you a few things about dealing with the realities of life.

Improvisation. The way I see it, the blues pretty much started the whole improvisation thing in popular music. If it didn’t, at the very least, it gave birth to rock and other forms of popular music, and we all know how that story went. Just listen to the countless versions of John Lee Hooker’s “Boogie Chillen” and you will get it. This improvisational spirit extends beyond the musical realm of things to life in general. Realism. Let’s just say the blues is as basic and real as you get. Blues people sing about mortal love, work, food and money. They sing about mean bosses and even meaner lovers. They don’t sing about private jets and unicorns, if you know what I mean? 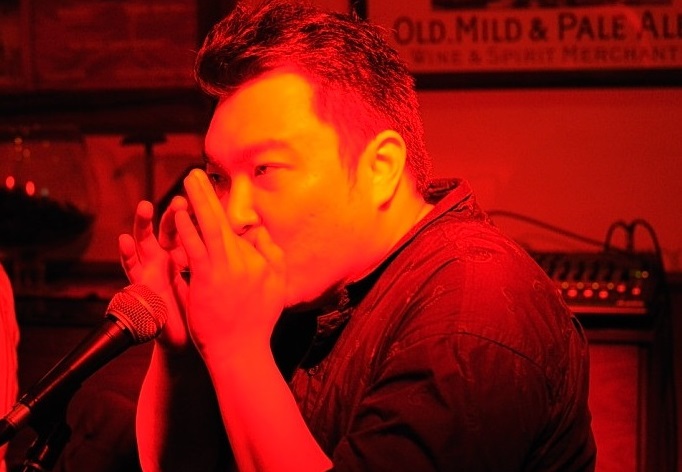 "The blues is about facing and coping with adversity. And about being dead bent on having a helluva damn good time despite the odds being stacked against you. It more than teaches you a few things about dealing with the realities of life." (Photo by Kelvin Ng archive/All rights reserved)

How do you describe Skunk Jive sound and songbook? What characterize your music philosophy?

Skunk Jive is really just a simple raw and funky blues band, that’s it. We like Bo Diddley and Slim Harpo, to give you a cue. The thing is just to carry on the blues tradition in our own little way - just to have fun! Boogie woogie!

There are many but I will just talk about one. I recorded harmonica on Stephanie Sun’s debut album. And I met her in the studio during the recording. She wasn’t a star yet then so I just chatted with her like I would with any other musician. Months later, in a late night cab ride back home, I heard her song on radio. The cab driver told me that she had become this overnight sensation in Taiwan and she was destined for stardom. Little did I know then in the studio that she would become such a big super star …

I miss the simplicity. It just seems that back then, people got by with less and they were still happy and played their hearts out. And they made all this beautiful music with often, just the bare essentials …

My hope for the future is that more of the new generation of musicians will mine the blues well to get their mojo. The blues mojo is what made rock music great. Like The Black Keys or Derek Trucks … they have done exceedingly well. I mean, there’s a reason why successful crossover artists like Bonnie Raitt, Eric Clapton and Robben Ford continue to pay so much homage to the blues. My fear? Well, I’m not one to feed my own fears … 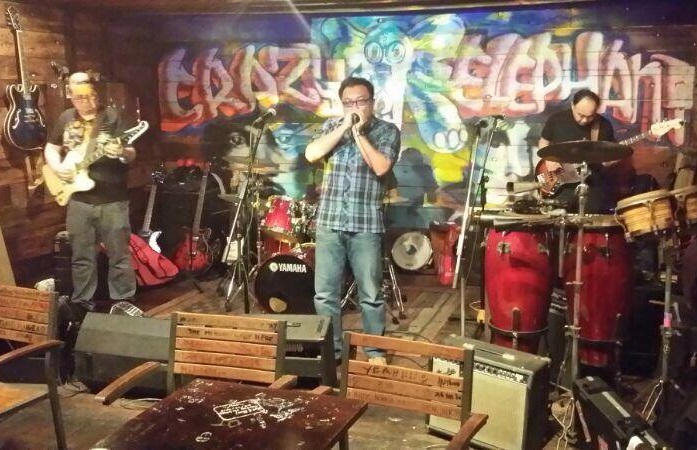 "I miss the simplicity. It just seems that back then, people got by with less and they were still happy and played their hearts out. And they made all this beautiful music with often, just the bare essentials …" (Photo by Kelvin Ng archive/All rights reserved)

Make an account of the case of blues in Singapore. Which is the most interesting period in local blues scene? What are the lines that connect the legacy of Blues from United States and Europe to Singapore?

From what I gather, the earliest blues music that really caught in Singapore was the British blues in the 60s. You know, stuff like Cream, John Mayall, Rolling Stones etc. I wasn’t there in the 60s but from what I’ve heard, it was quite a lively blues scene here then, with quite a few bands playing that kind of stuff. Next up, the CD boom in the 90s helped to spread the blues gospel a little more in Singapore. And since then, blues music has become more accepted and enjoyed by bigger audiences. Today, a lot more blues lovers in Singapore are more aware of real-deal American blues artistes like Buddy Guy, John Lee Hooker and Albert Collins, much more so than before.

I’m quite heartened by how the overall local music scene is evolving. I’m talking about the whole music scene in Singapore, not just the local blues scene. To me, it is pretty vibrant and there seems to be a kind of outpouring of really good quality local music in the last couple of years. So, I’m just happy checking out different stuff here …

I’m no musicologist. So all I’m gonna say is: Careful listening will make one realize that several ethnic folk music forms, some very ancient, all over the world have similar strains to early primal blues. When you really distill the blues to its core essence, it is about melancholia. And you know, melancholia is not unique to the blues. I believe that when humans first found expression in music, melancholia has always been around in the earliest music forms. And these forms, be they from India or Africa or China or elsewhere, predated blues music by literally, thousands of years. For example, I managed to get hold of some incredibly good traditional Turkish folk music and the similarity of it to early blues in terms of feel and mood is just remarkable.

I really don’t know where to start. There are literally hundreds of moments in blues history that I will like to witness. I think above everything else, I will really like to be there at the earliest documented sighting of that lone blues guitarist using a knife as a slide, in a railway station. That must have been really surreal then. Yeah, and it will be really cool to see all that classic 50s and 60s Chicago blues stuff happening, witnessing characters like Muddy Waters, Howling Wolf and all the rest, in action. 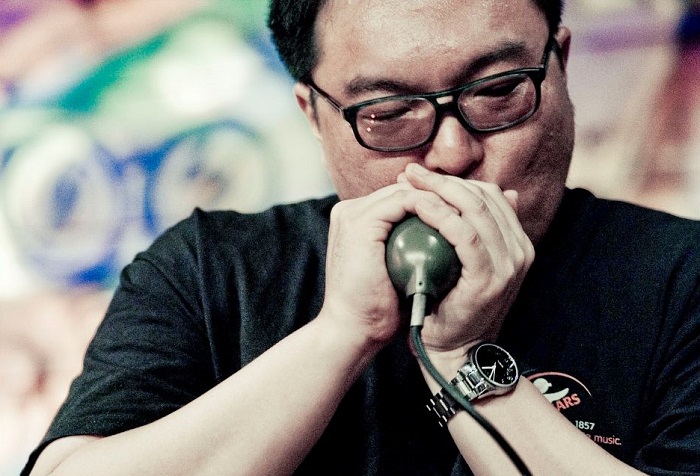