Interview with singer-songwriter Terry Jones Rogers, a multi-instrumentalist, who has long and varied career

"Let's go back to the days when you actually had to work on your skills as an instrumentalist, singer and/or songwriter naturally without using 'sampling' of people's music who did take the time to develop their talent."

Terry Jones Rogers was born in Corpus Christi, TX. After several moves, he settled in Macon, GA, a town with a rich music heritage, which certainly influenced Terry's love for music, as well as the constant music around the Rogers' house. After experiencing a standing ovation at age 5, singing his first solo in church, Terry's path was chosen. In 1969, Terry teamed with fellow Maconite Mark Heard, and formed the group Infinity+3, recording an album in 1970. College years in Athens, Georgia brought a new band called Hawkeye. After returning to Macon in 1973, Terry teamed with Bill Pound and Buddy Greene, calling the trio Rogers, Pound & Greene. 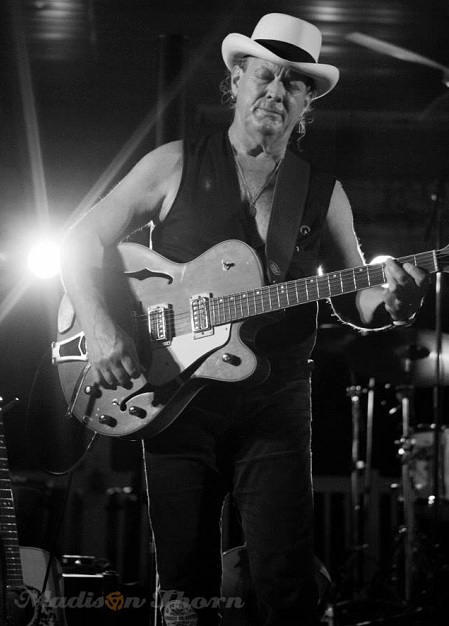 Three days after forming, opened a show at the Macon Coliseum for It's A Beautiful Day, James Gang and Brownsville Station. When Greene returned to his college education, The Pound & Rogers Band was formed, recording at Capricorn Studios with famed producer Paul Hornsby. In 1983, Terry met Michael Clarke, original drummer for The Byrds and Flying Burrito Brothers, in Hilton Head, SC, leading to his long association with The Byrds, fronting the group nationally and internationally after Clarke's invitation to join the reformed band, The Byrds. Moving to Nashville, TN in 1993, he was introduced to Scott Nienhaus by their mutual friend Supe Granda of The Ozark Mountain Daredevils, and they were soon working together in the newly formed group, The Byrds Celebration, as well as Rogers & Nienhaus. In 1994 Terry and Scott went into Music Masters Studio in St. Louis to record a CD, along with Skip Battin and Vince Barranco. In addition to Rogers & Nienhaus, Scott and Terry have teamed up with Supe Granda and Tim Politte to form a new group called The Real Macaws and has recorded a CD with old friend Greg Trampe as co-producer. The CD, titled 'Standing Alone' The Real Macaws. In 2013, YOUNGER THAN YESTERDAY - with former members of The Byrds - released a new album.    (Photo by Madison Thorn)

How do you describe Terry Jones Rogers sound and progress, what characterize your music philosophy?

My songs and style of music is very much a mixture of all of my influences, certainly a reflection of the term "Americana” that is often used to describe songwriters that don't fit in to one genre of music, such as rock, country, etc. And as a songwriter, I appreciate the power of music and always put a positive spin lyrically in my songs.

I would say travel, and of course the search for true love! Many of my songs are a documentation of sorts, about my many travels nationally and internationally, and many are written while in the midst of travel and on various subjects. I also enjoy writing for films, which always includes a screenplay or script, so the ideas are easy to come by. 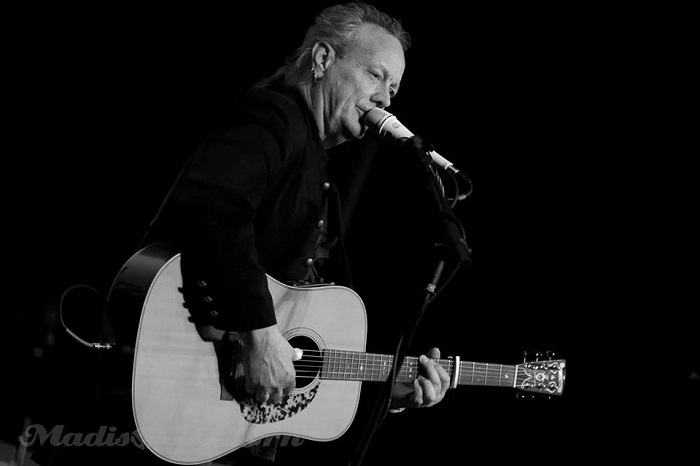 "I am touched emotionally by great songs, and great songs can make you laugh, cry, or just be touched in a deep place." (Photo by Madison Thorn)

Why did you think that the Folk Rock music continues to generate such a devoted following?

Perhaps because it is so pure and straight forward, with the vocal harmonies and the mostly acoustic instruments. I was taught harmonizing by my Mother at a very early age, and it has served me well throughout my career. Folk-rock truly exemplifies harmony!

That is a difficult question to answer, as I find life fresh and interesting on a daily basis, but with that said...When I first traveled internationally many years ago on a tour with The Byrds featuring Michael Clarke, our first shows were in Athens, Greece, with opening act Roy Harper on Mount Lycabettus. Even though the concert was not well attended, looking out over the city from that stage, with a full moon shining, is a wonderful memory for me!!

As far as the worst moment, again a difficult question....I suppose losing some of my greatest influences while growing up in Macon, GA with the deaths of Otis Redding and then Duane Allman a few years later, are events that forever changed my life. I began performing at the age of 5 years old with my family gospel group, and the death of my Father when I was 7 years old was the first of those life changing losses for me. Music has been the source of my healing.

Best advice.....Don't ever stop....the more you write the better you get!!

What are some of the most memorable gigs, jams and open acts you've had? Well there have been many of those experiences certainly! After the untimely death of Michael Clarke in December of 1993, Skip Battin and I formed THE BYRDS CELEBRATION with his former Byrds mate Gene Parsons and newcomer Scott Nienhaus. Our first tour was a European tour, so Skip, Scott and myself flew to San Francisco and drove up to Caspar, CA to Gene Parsons' house to rehearse and put the whole thing together. After several days of rehearsal we played a "warm up" gig at the Caspar Inn to a select audience that included Johnny Barbata, which was a great show!! Then while in Amsterdam a few weeks later, we stayed at Hotel Weichman still run by a great couple who owned the hotel for years and was the preferred hotel used by The Byrds and The Flying Burrito Brothers. Great time!!

While living in Nashville, TN, I was able to rekindle my friendship with world-class violinist Vassar Clements. We had met years earlier in Macon, GA when he came to town to record on Dickie Betts' first solo record "Highway Call". I was at Capricorn Records Studios when a call came in from the Macon airport that Vassar Clements had arrived and needed a ride to the studio. My friend Buddy Greene and I quickly volunteered to go and get him which we did. Never met a nicer guy as well as being an amazing musician!! While in Nashville we started hanging out and he even joined a group we formed to play around Nashville called The Real Macaws that included myself, Scott Nienhaus, Michael "Supe" Granda (Ozark Mountain Daredevils) and Vince Barranco.

While touring Europe with The Byrds Celebration with myself, Scott Nienhaus, Skip Battin & Gene Parsons, we played in Luserne, Switzerland on my birthday, June 11. Gene Parsons came out to the front of the stage, put his arm around me and told the thousands of people in the audience that it was my birthday and they all sang Happy Birthday to me. We then drove all night to Amsterdam where we checked in to the Weichman Hotel...they all slept and I hit the streets, returning a few hours later and wrote my song "Amsterdam". That night at our sold out show, after playing numerous encores, we played my new song, with the audience singing along on the chorus while holding up their lighters. A magical time for all of us!! 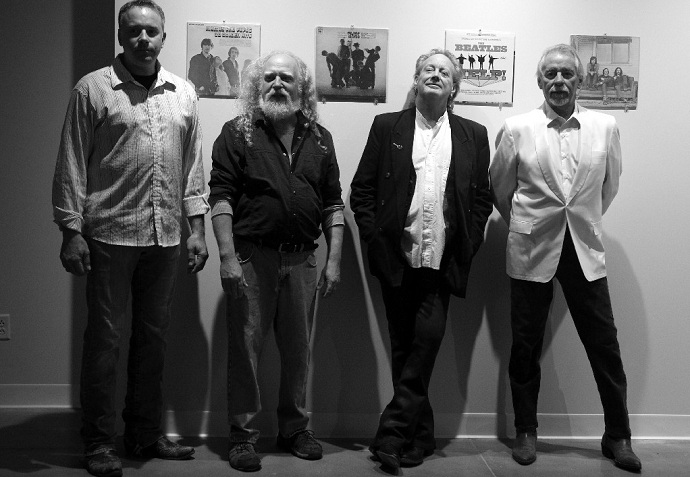 "Best advice.....Don't ever stop....the more you write the better you get!!" (YOUNGER THAN YESTERDAY - with former members of The Byrds / Photo by Madison Thorn)

I miss those that are no longer with us from the music of the past...in particular the ones that died tragically young while at the top of their game. I am enjoying the recent singer-songwriter boom as well as the reemergence of folk-rock and the Americana genre. Certainly the Allman Brothers Band has spawned great offspring such as The Tedeschi Trucks Band, Government Mule, etc. Not to mention all the great stuff coming out of New Orleans!!

Which memory from recording at Capricorn Studios with Paul Hornsby makes you smile?

That was an exciting time for me as I was about 22 years old, and recording at Capricorn Studios was certainly a big deal, and of course with Paul Hornsby producing! Sam Whiteside was the engineer on those sessions, and was already a good friend, which made things comfortable and easy. The band was called The Pound & Rogers Band, which at that time was a 5 piece group with an electric violin player named Willy Royal, and drummer David Walshaw who was fresh off the Dickie Betts Highway Call Tour, as well as being the drummer on the record. My partner Bill Pound was older by 6 years and had been with local group The Boogie Chillun, who had all become good friends with The Allman Brothers Band when they first moved to Macon. Remembering those times always brings a smile to my face!!

What are the lines that connect the legacy of Blues with Folk and continue to Acid Rock and Country music? The origins of all of those styles seems to always go back to the working man, from the slave market which came from Africa in to the Caribbean, South America, and the Southern states of America, to the coal miners and steel workers etc. Finding solace and comfort with the power of music, as well as creating a rhythm to help you work. Rock and Roll evolved from white musicians copying what they heard black musicians doing, with the music as well as movements of stage. Heart and Soul...the common denominators!

I am touched emotionally by great songs, and great songs can make you laugh, cry, or just be touched in a deep place. One song that recently stirred my emotions, is by a group out of L.A. called "Dawes", and the song is "A Little Bit of Everything".

If you have no singing talent, you just don't sing, instead of using 'Auto-tune'. Let's go back to the days when you actually had to work on your skills as an instrumentalist, singer and/or songwriter naturally without using 'sampling' of people's music who did take the time to develop their talent.

I would have to choose Abby Road Studios during the recording of The Beatles "Revolver" album. One of my favorite records by them and just as they were branching out in to new areas of writing and songs from George Harrison. 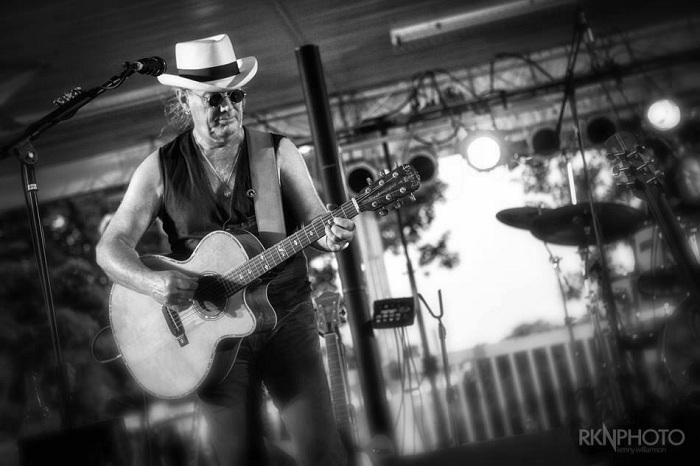