"Africa is the mother of rhythm and there is no music without rhythm."

Salvador Şangó: The Spirit of Afrofusion

The Afrofusion orchestra SALVADOR SANGÓ (pronounced Shongó) is the brainchild of Sotiris Papadopoulos, a Greek who has been living and working outside Greece for the most part of his life. The band’s name which, as it happens, is also Sotiris’s artistic pseudonym, is not accidental: Salvador is the translation of “Sotiris” –saviour- in Spanish, whereas Sango' is the god of lightning, the protector of justice and the weak in the Yoruba pantheon, one of the most populous tribes in West Africa with a particular presence in music, dance and the arts in general. Circumstances brought the Greek to the land of the Yoruba when he came to Nigeria for the first time in 1980 to play with Fela Anikulapo Kuti, the indisputable Afrobeat king. The same destiny brought him back -through UNESCO- eight years later to head the Physics department of a Nigerian university having come from the research elite of Oxford. Being a physicist during the day and a musician during the night was a tall order for Sotiris and after a series of personal and professional pursuits he opted for music putting his other talents aside. During this phase Sotiris formed his well known jazz quartet, SPICE, and has performed with numerous Nigerian artists including Femi Kuti, Orlando Julius, Victor Waifo etc.

The musical result of these and other experiences not mentioned here is the SALVADOR SANGÓ orchestra which was created in 2004 with the broader aim of presenting to the international audience a bridging through music of the cultural and racial gap which still reigns supreme in the world of “globalization” of today. This is done, however, without sacrificing the individuality and particularities as much of the orchestra members as of the musical style itself. The result is world music par excellence. To a large extent their music employs West African polyrhythms and folklore as its foundation but the final result surpasses by far the West African borders: it passes through Latin America for its salsa/afrocuban ingredients, North America for its jazz/blues influences, Western Europe for its classical/rock nuances and the Mediterranean for its flamenco/arabesque colours, subtly returning to the founder’s Ithaca: Greece.

How do you describe Salvador Şangó sound and progress? What characterize your music philosophy?

Salvador Şangó’s musical genre is called AFROFUSION. It is a carefully crafted mix between West African music with non African musical elements such as Rock/Blues/Jazz/Funk/Latin/Flamenco thereby making the music more accessible to non African audiences. However, based on rhythm alone, the music has a clear African character.

Our music preaches Oneness. It tells us to forget our racial, religious, social, cultural differences and helps us realize that one cannot do without the other since we all live in an interconnected world 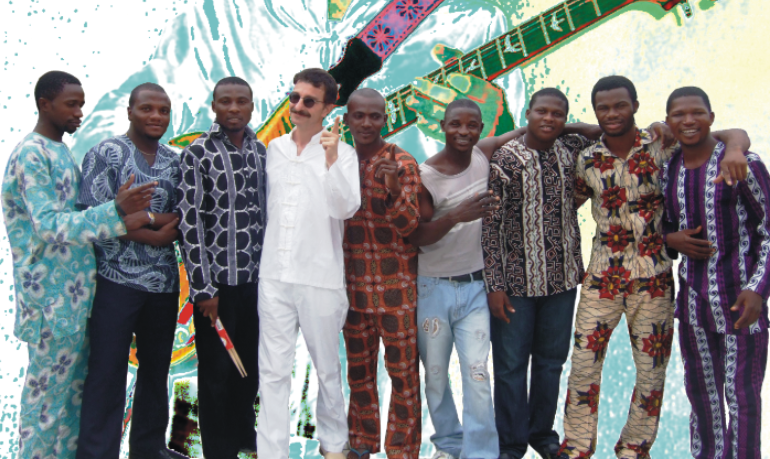 "I would destroy all the obstacles to true musical creativity and expression. And the thing to start with would be today’s music industry that ‘makes’ stars and then, when they stop making gains for them, breaks them. Thousands of examples…"

What are your experiences from the Nigerian music scene?

The Nigerian music scene is not very different from other music scenes in the world. It has the mainstream section which is basically a computer-generated musical background with hip hop/rap/dancehall vocals mainly sung in pidgin English and local languages and its indigenous music scene. There is an R&B-type scene as well. We really do not belong to any of the above, as what we do does not fall within any of the categories mentioned. The presence of a ‘white’ man in an otherwise all-Nigerian (actually all-Yoruba) band is a spectacle by itself. Coupled with the fact that the ‘white’ man sings nearly flawlessly in Yoruba (a tonal and very difficult language for us Europeans) makes the spectacle even more unique. A lot of people come for the music but a lot of people also come for the spectacle. Our measure of success is how many people we provoke to dance while we are playing…and there are always many.

Which was your best and worst moment there?

I will let you guess. Nigeria is a country which last month was declared the 1st (capitalistic) economy in Africa where more than 70% live below the poverty line, with essentially no electricity, no water, no drains, roads in a despicable condition, no social infrastructure and with one of the highest unemployment rates in the continent. One of my best moments, then, is when we hear the siren announcing that NEPA (Public Power Corporation οf Nigeria) has brought back the electricity after long periods of no electricity. Strange? Maybe, but true.

Why did you think that the African music continues to generate such a devoted following to all kinds of music?

Because Africa is the mother of rhythm and there is no music without rhythm. Moreover, because of slavery, Africa exported its music to the Americas and consequently to the rest of the world. 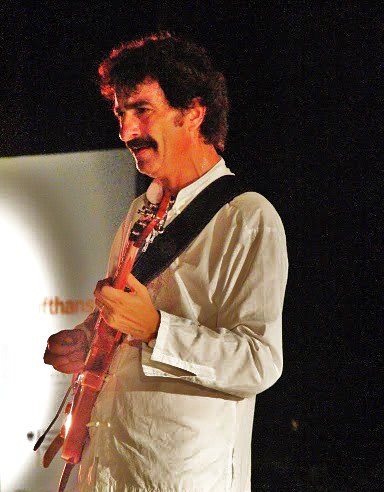 At the 29th Street Cultural Theatre with Tito Puente in New York in 1984.

"My hope is that the music of today and tomorrow will stop being as ‘mechanistic’ and ‘automated’ as it is."

The World Music Day in Athens in 2006, the Afro Euro Festival in Cologne, Germany in 2009 and the Calabar International Jazz Festival in 2013 in Nigeria.

That music, apart from being an art, is also a business. If you have no direction and discipline, your business (and your music) will fail. Unless you play music for a hobby. Be true to yourself, don’t lose your passion for what you do and always remember that you, as a musician, you are messenger, not the protagonist in the play. The music is not you; you are a servant of the music and, by extension, of the people you play your music for.

Are there any memories from Fela Anikulapo Kuti and Dizzie Gillespie which you’d like to share with us?

In what concerns Fela, his jazz saxophone playing on several jam sessions at the renowned Jazz 38 club in Lagos. The world does not know that Fela, apart from being the inventor of Afrobeat, was also a top-class jazz saxophonist.

As far a Dizzy is concerned, being on the same stage with him is a magical experience in itself. He was the Master Piper. When he played, band and audience alike went into a ‘trance’. My jazz quartet SPICE was the opening band for the concert he gave in Port Harcourt, Nigeria in 1989. Even though he was a diabetic and visibly ill, he accorded us the pleasure and honour of having a session with us at the end of his concert and we asked him (before the show) whether he would agree to play ‘A Night in Tunisia’, his famous composition which our band played quite well. He declined, saying that it was one of the tunes his band would play and we agreed on some other tunes of his. ‘Grooving High’ was one of them. When Dizzy played ‘A Night in Tunisia’ with his band, it took me something like three minutes into the song before I realized which song he was playing. It was a totally re-invented ‘A Night in Tunisia’! He had changed the time signature and the bass line completely. By the end of the song the audience was in standing ovation, even though – I bet- 90% of the audience did not know that he had just played one of the most famous jazz standards in the history of jazz. 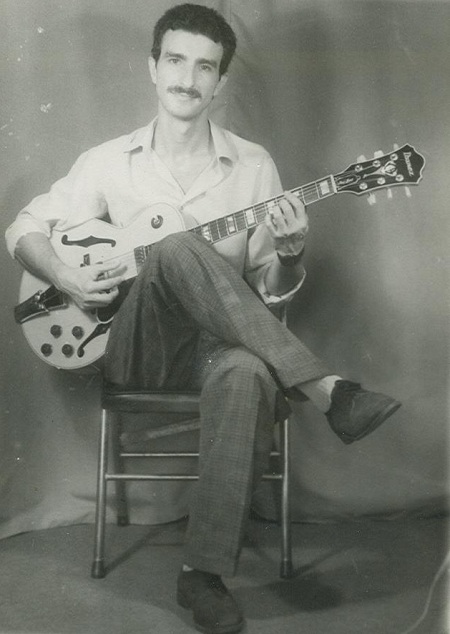 The mainstream music of today lacks the fire and the passion of the music of the 70’s-80’s. It also lacks the sincerity with which music was played during those years. I remember going to an Eric Clapton concert in Dortmund, Germany as a 21 year old and for weeks after that feeling ‘lightheaded”. It was as if I was walking on an invisible air cushion. Those sounds kept ringing in my ears day and night. It is by no means a coincidence that the music of those decades created a Rock Generation. A generation of people who not only loved that music but also lived the lifestyle which came along with the music. And that was more than smoking reefer and taking mushrooms. It was a social, cultural and political movement which had its own values.

My hope is that the music of today and tomorrow will stop being as ‘mechanistic’ and ‘automated’ as it is. That it will move people the way it moved me when as a 16 year old I watched the ‘Jimi Hendrix at Monterey’ movie in a small cinema in Athens. That it will change something permanently in people’s hearts and minds.

My fear is that what I described above may never happen. In that case, I would really feel sorry for the upcoming generations for never having felt those feelings.

I would destroy all the obstacles to true musical creativity and expression. And the thing to start with would be today’s music industry that ‘makes’ stars and then, when they stop making gains for them, breaks them. Thousands of examples…

What are the lines that connect the Afro Beat with Blues / Jazz, and continue to Salsa / Bossa and Rock music? 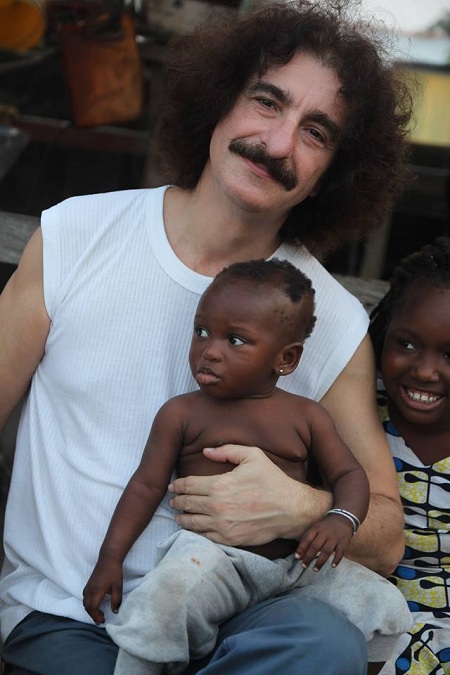 Afrobeat is based on James Brown’s rhythms with a slightly different syncopation to fit the heavy, rhythmic bass line. There is little or no Blues and Jazz in it per se, with the exception, perhaps, of the horn lines that Fela used to create, which borrowed elements from these genres.  But the final product is quite idiosyncratic, it is Afrobeat.  As far as Rock is concerned, I believe that I was the only musician who played with Fela using a Rock sound and playing Rock phrases in the guitar solo part.  It sounded well, at least to my ears, but it was not Afrobeat proper. It was a hybrid.  As for the influence of Afrobeat on Latin music, the connection is a bit more complicated. The millions of Yoruba slaves taken to Cuba and Brazil are, to a large extent, responsible for what we know as Afrocuban music and Samba/Bossa music. Their drums permeated these musical genres and helped give them their final shape. Some, but not all, of these rhythms are also used in Afrobeat.

What the difference and similarity between African, European, American ... and Greek music scene?

If by “scene” you mean the audiences, the differences are almost zero. When you play music that turns your audience on, the result is the same whether you play for Americans, Chinese or Germans. The aim of true music is to bring the audience to ONE dimension and this dimension is the same for every audience. This is the dimension of ecstasy. Ecstatic people behave essentially the same even though there are minor differences in their behaviour owing to their different ethnic backgrounds.

I do not need a time machine to be where I want to be. I have built a house/studio five minutes away from the Atlantic ocean with an endless beach decorated by millions of coconut and other tropical trees and plants. When I am there, it is me with God, totally alone. It is my source of inspiration that I transform into music when I enter the studio and I don’t have to wait too long to do that. 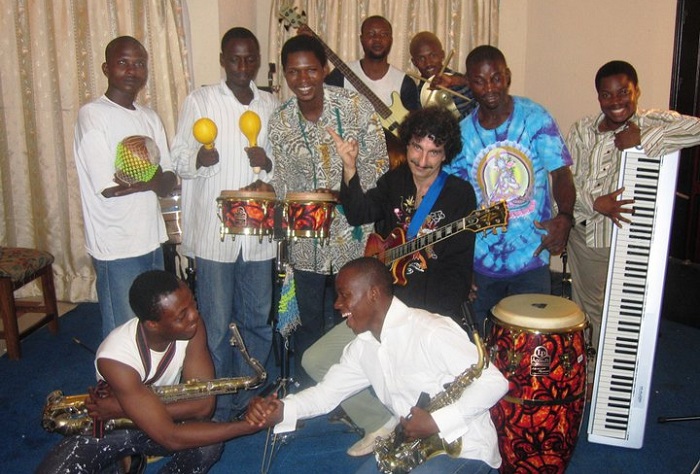