Rene Trossman is a guitar player with a long history in Blues Music. Since turning pro in 1985 Rene has just about done it all. The fantastic Chicago club scene, where he was a regular at both South Side and West Side clubs, playing with the likes of Buddy Scott, Byther Smith, Lurrie Bell, Iceman Robinson, Little Mack Simmons, Lorenzo Thompson, Deitra Farr, and others. In 1994 Rene came to Europe, moving to Prague (Czech) where he now calls home. Since that time Rene has toured extensively in Europe with his own band and with U.S. Blues stars.

Rene considers his current band the best band he has ever had! The band plays authentic Chicago-style blues with a contemporary sound. Make no mistake, Rene Trossman has paid his dues to play the Blues!

1970, when I heard the record, “Live Wire – Blues Power” (Albert King).  It was then that I knew, I must learn this! I was playing rock music of the time, Led Zeppelin, Stones, The Who, etc., and it all changed with that one record. I started looking for more and more of this magic stuff!

These were the first blues LPs I ever had, and played them over and over again, while trying to imitate the riffs and licks. 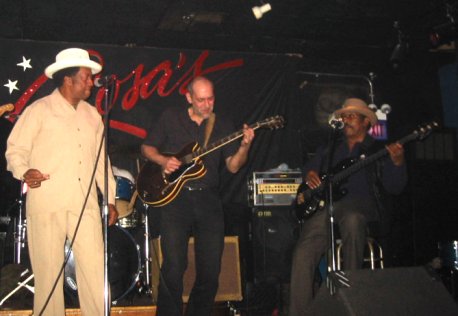 Definitely YES! If you do blues in addition to another job, both will fail. It is a full-time commitment, especially if you're an independent artist and self-managed and self-booked.

The worst, well, it depends how far back you go, but I would say, in Germany one night, we were on a tour with Lorenzo Thompson, and there was big local football  match, and ONE guy came to the gig, we had no accommodation and wound up sleeping in the club, on the stage. That was probably the worst.

What do you think were the reasons for the European blues boom ?

The world got “smaller”, and in Europe, it was something so new, different than anything they knew.

Plus, it is the nature of blues, 4-4 time, the beat, and even if you don't understand English and the lyrics, it is very “reachable” music for people. That's the difference with jazz, a lot of the general public can't understand jazz, so they don't listen to it or go to gigs. But blues, very easy for anyone to grab on to.

Age, sex, race, nationality, it doesn't matter. Give people a Jimmy Reed bumpty-bump, with a good shuffle drummer, and the asses start shaking.

One day at a time, this is how I live. Mo guarantees for tomorrow, so try and make today count. I have a new CD coming out at the end of the year,or early 2012. I also have a 12-city tour in Czech Republic in Feb-March, 2012, and more in Austria, and then Switzerland.

I am hoping for some really good things to happen with my new CD, which I believe is a major breakthrough for me. My last CD had 4 original songs, this one will have 9 or 10.

Do the media help the blues in Czech?

In a word, no. Of course, if you're old, black, and have a name in the business, well, they do. B.B. King fills big venues here, but then others, really good too, do not and don't receive much coverage in the media as well.

It's blues, niche music, these things apply all over the world, not just in Czech Republic, or Europe. 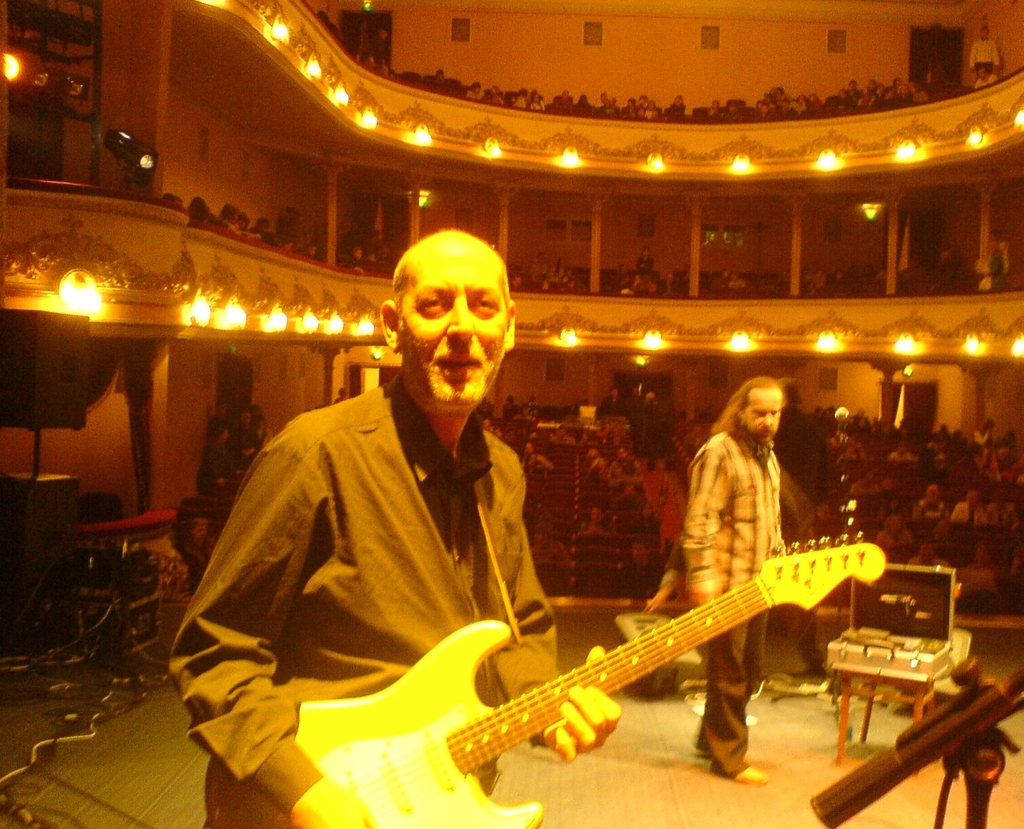 Music that is very misunderstood. Blues is a real big term, encompassing a long history through today, and features a multitude of styles and niches within itself.

There are also regional differences that transcend style or eras. But to me, personally, it is that late 40s-50s-60s, electrified version of Mississippi music that migrated north to Chicago.

The Blues-Highway, from Mississippi to Chicago, this was really how what is known as the Chicago style came about. Guys from the south, moved up north for socio-economic reasons, plugged-in and played electric guitars, and played with converted swing-drummers, and there it was, this new, exciting sub-genre of the blues is born.

If you look closely, almost all the great names in Chicago blues music are people who moved north and are actually from Mississippi.

Do you think the younger generations in Czech are interested in the blues?

What do you learn about yourself from blues?

The hardest part of this all is showing people, strangers, friends, anyone, your soul. To be truly honest and sincere, and go 100% every time, this is what I learned.

Knowing the notes or how to play isn't enough. I also learned how to overcome obstacles in life through blues and playing music live

Religious, holy, pious. This is the most sacred relationship there is. A lot of musicians make the mistake of not really interacting with people, people who are there and paid to see them.

You can't ignore your public, we feed off of each other’s energy. If the people aren't excited, you can't say, oh bad people tonight. No, you have to try harder to get them. If they aren't excited, it might be you!

In my own experience, things like team sports were very good preparation for playing in a band with other people. Working together to reach the same goal, it's the same approach.

People who aren't capable of this, usually chose to play solo, and in sports it's the same, they choose tennis or golf, and not team sports.

Little Arthur Duncan’s “Singin' with the Sun” CD. It’s great! It’s also got Rockin’ Johnny is on guitar, and he knows “the stuff”!

What mistake of blues you want to correct?

That blues-rock is another genre within blues, but does not define the genre today by any means. 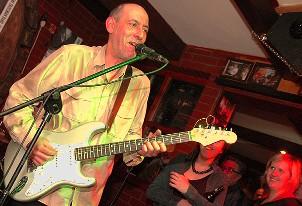 From the musical point of view is there any difference between Chicago and Prague?

A lot, and huge. Completely different approach in these places. At home, when an older guy called you for a gig, wow, it was a big deal! Here, in Praha, with the clubs and tourist scene,  a lot of young guys have a lot of gigs, and are band leaders themselves in many cases.

I simply feel like they don't appreciate and value gigs in the manner that they should. It extends to the music, gigs, and the way they play too.

Pick 3 words to describe your sound/progress

I've been to Greece a few times, but not playing. I chose it as my holiday destination. Great place. Also, I grew up and went to school with many Greek students in basic school and high-school, so I know all of the bad words!

I know that Greece is facing many challenges today, and when I look at the incredible history of the country I have to believe that things will be solved and Greece will move forward. Any place with a history and culture like Greece must endure.

Thank you for your interest in my music and this interview.  I am so glad that what I do could reach others so far away, that's an honor really. So, please look for my new CD coming soon! EFKARISTO :-) 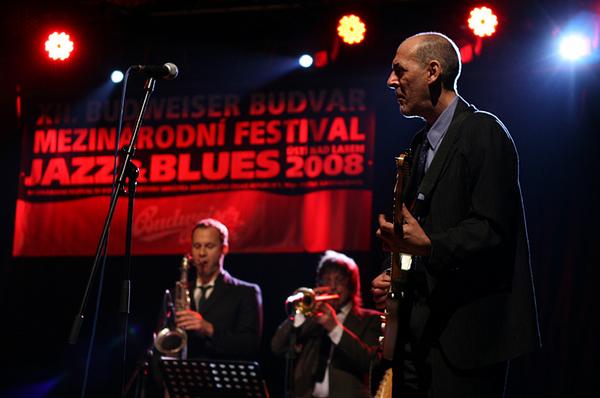 Quotes from Reviews of POSTMARKED ILLINOIS

"...bathed in a pure juice of Chicago blues. ...excellent album by Rene Trossman, an album that will stand out, a must, an essential…!
Francois Pfeiffer - BLUES Magazine, March, 2008 - France 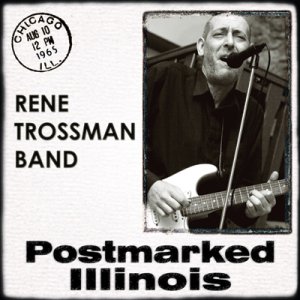 "...playing in a style that owes a little to T-Bone Walker and more to the great sounds of the Chicago blues clubs of the sixties - Earl Hooker, Magic Sam, and Otis Rush, for example. He sings too, in a manner reminiscent of his big hero, the sadly under-rated Windy City bluesman Kennith "Buddy" Scott, and his own songwriting (four originals out of 12 tracks) is fine. Look out for this "new" talent - only 20 years of blues experience! We will be hearing more of him, I am sure.
NORMAN DARWEN - Blues Art Journal - November, 2007 - Austria

"When they come to France, don't miss this band!"
Soul Bag Magazine - December, 2007

"Trossman's raw voice makes this record more than worthy to listen to."
"When you listen to the title song ("Postmarked Illinois") you imagine yourself in the blues area of Chicago. A nice guitar solo makes this song a highlight."
Ger van Eldik - Bobtje Blues Review - Dutch Blues Website, in English

"When you listen to the title song ("Postmarked Illinois") you imagine yourself in the blues area of Chicago." */Ger van Eldik - Bobtje Blues Review - Belgium

"Trossman feels West Side blues in every single sound, both, as a guitar player and as a vocalist." */Andrzej Matysik - Twoj Blues Magazine - Poland - 2007/

"I love it! You did a great job. Keep up the good work!" Bob Stroger

"Rene Trossman has a deep understanding of Chicago blues guitar and I enjoy hearing him carry on that tradition." Bob Margolin