"Business and all the middlemen seem to have de-valued Artists to the point that often the money end has more influence over quality or loyalty."

Steve Johannsen is a versatile artist, focusing on rock art, event promotions, graphic design and portraits. Loves a creative challenge and works in many styles and media. Steve has always had a passion for art. He grew up in small mid-west town in what seemed like a “Mayberry” upbringing. He watched the world changing around him on TV, radio and magazines. He was totally amazed with the radical changes in music and the new mind-boggling art of the 60′s and 70′s. Steve drew a lot of portraits and mock posters of his musical heroes of the day. Music became a strong second love. 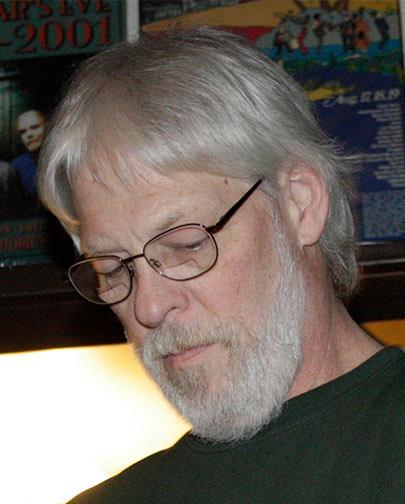 In 1972, he moved to Colorado to go to Rocky Mountain School of Art for two years. Following art school, he began working as a commercial printer, but soon realized he lacked the interest in mechanics to excel…and machines bite fingers… which he planned on keeping. He evolved into other areas of the trade. Met  his wife in Colorado and began family life together, lived in Western Colorado until late 1987. His last project in the mountains was a poster for the Grateful Dead concerts in Telluride. Steve moved to Oregon, where he took a job with a large printing company for nearly 15 years. In 1988, created what would become most widely recognized illustration…American Relics, as a magazine cover. A legal battle over unauthorized use of the design, helped establish a new Art Law, which now protects the rights of other artists’ nationwide. He loves the challenge of different and new subjects and styles. That’s why his work ranges from paintings to graphic design to portraits to rock and roll. Steve loves the creative freedoms which rock art offers. He have also experienced photography, sign design and painting, screen printing posters, apparel and many related fields. Following a lay off from printing in 2002, he devoted full time into his art business. He still does a wide variety of projects, but focusing more on his Music Art, Portraits and Events Promotion design territories. As a very versatile artist, he welcomes all inquiries and opportunities to work together on personal or commercial projects.

What first attracted you to the Art & Rock n’ Roll culture and how has the Rock Art changed your life?

When I was in high school (1968-1972) the whole world was changing all around me. Although I was very isolated growing up in NW Iowa, new trends in music and poster art were being shown in magazines, movies and on TV. I was blown away by these exciting wild, new styles in music and art and soon tried doing my own versions of rock posters and portraits of my favorite performers. What I did back then, remained a driving force in inspiration which led to the art I do today, for real.

What do you learn about yourself from you’re the ARTS (visual, music etc.) and what has offered you?

I learned to keep a totally open mind and absorb ALL the influences around me...all types of music, all styles of art, the pop culture images of past and current times in print, TV, movies, advertising art etc. What I love best about Rock Art is that I can create in one style or influence on one piece, then be 180 degrees different on the next. I have an open door to choose what feels best and right to me to fit the project. 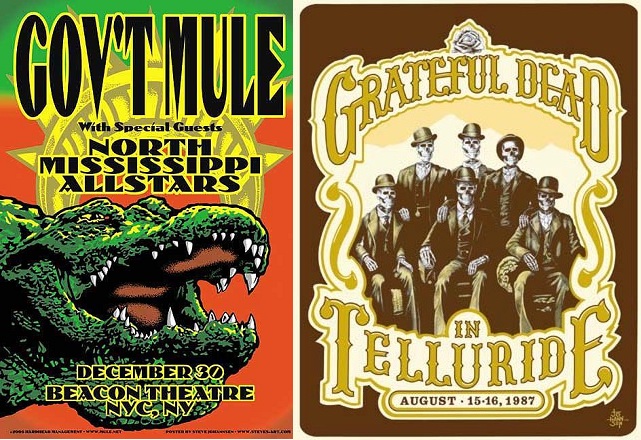 "I cherished my time working and becoming great friends with Gary Houston and meeting many of Today's best at Flatstock and TRPS poster shows. For musicians...it was great to meet folks including Bob Weir, Phil Lesh, Warren Haynes, Los Lobos, Gregg Allman and Jaimo from the Allman Brothers Band, Michael Franti and many others."

What characterizes Steve Johannsen's work & progress, how do you describe your philosophy?

I pride myself in versatility. I've enjoyed doing more conservative, traditional styles and subjects right along with very wild and imaginative designs. I want to experience different things first hand. I needed to do things myself in order to understand what it really is about. In my art career, I've been a commercial offset printer, I've pulled screen printed posters and apparel, I've been a sign painter, a draftsman, architect. All these experiences help me understand both what I do like as well as things I don't care if I ever do again...but at least I know. I get to pull something different out of my little bag of tricks all the time.

What is the relation between music and image? How important was the music in your life?

I have ALWAYS loved music, of all kinds. I appreciate the powerful feelings and imagination that the sounds and lyrics create. These things have sparked my own visual reactions which are applied in my art. Even today, I will listen to the music of a band in order to inspire myself as I dive into sketching and searching for an image that works.

How does the music affect your mood and inspiration? What are the triggers for the creation of artwork? 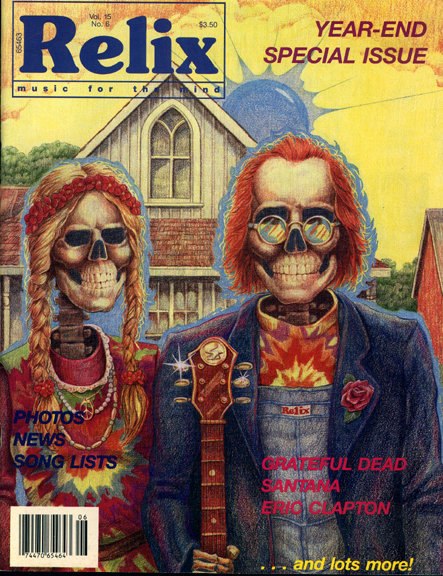 Most of that was answered in the previous comments. Some art is inspired and “Just HAS to happen” the way I imagine it. But in the art business, I may be given a suggestion or theme to follow by a band or management. Then it becomes my challenge to seek out my best ideas to offer.

"Rick Griffin and Robert Crumb probably made the most influence on me from those worlds."

What are some of the most memorable posters and portraits you've had?

Some of my most notable projects which greatly influenced and positively changed my art life have included: the Grateful Dead Telluride poster, Phil Lesh & Friends New Years 1999 poster, the American Relics cover for Relix magazine.

What do you miss most nowadays from the art and music of past? What are your hopes and fears for the future?

There doesn't seem as strong of a connection or loyalty directly between a band and the artists as there used to be. Business and all the middlemen seem to have de-valued Artists to the point that often the money end has more influence over quality or loyalty.

I would like to see more music returning to the fans. I believe that people don't have the accessibility to experience music as easily as in the past. Giant Promoters have driven up costs that are often too high for average folks. Money often means more than the music. The high costs of them doing big tours, the loss of retail sales vs. downloading issues have all taken their toll and changed things, negatively in my opinion.

What made you laugh lately and what touched (emotion) you from the music and art circuits?

The best experience I've had recently, was going the Warren Haynes' 25th Christmas Jam in NC last December. I was part of a wonderful Art Show which opened more doors plus getting to meet other great poster artists and rock photographers. I was also able to meet many other performers and wonderful people while having several days packed with listening to some of today's best music. 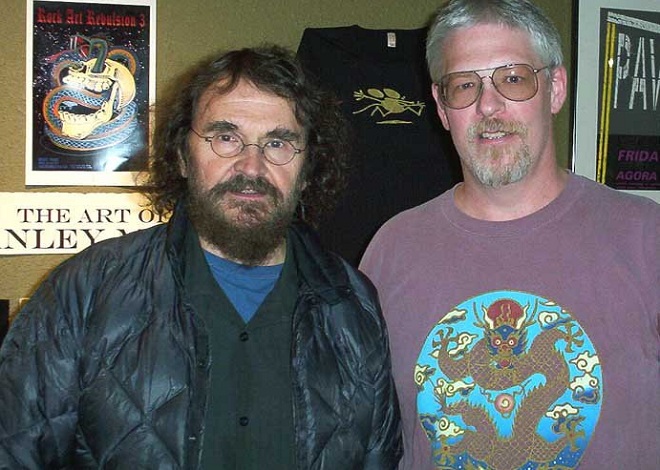 "I learned to keep a totally open mind and absorb ALL the influences around me...all types of music, all styles of art, the pop culture images of past and current times in print, TV, movies, advertising art etc." (Photo: Steve & Stanley Mouse)

Which meetings and acquaintances of musicians and artists have been the biggest experiences for you?

I've had the pleasure of meeting many famous musicians and artists. As for artists, I was on Cloud 9 after meeting Stanley Mouse and Alton Kelley, Victor Moscoso, and Wes Wilson. I cherished my time working and becoming great friends with Gary Houston and meeting many of Today's best at Flatstock and TRPS poster shows. For musicians...it was great to meet folks including Bob Weir, Phil Lesh, Warren Haynes, Los Lobos, Gregg Allman and Jaimo from the Allman Brothers Band, Michael Franti and many others.

Are there any memories from musicians where you have met which you'd like to share with us?

When my wife and I first met Bob Weir, he curtsied and kissed her hand. Watching Phil Lesh & Friends from side stage and getting a big hug from Phil as he walked off at the end of the show. Anytime hanging with Warren Haynes and Gov't Mule, hearing and telling stories. Getting huge art compliments from Gregg Allman at an Art Show.

What from your memorabilia and things (books, records, photos etc.) you would put in a "capsule on time"?

I would have to include several Rock poster books, like Art of Rock and Art of Modern Rock, some favorite albums and posters from Artists which I've loved and been influenced by. "I was blown away by these exciting wild, new styles in music and art and soon tried doing my own versions of rock posters and portraits of my favorite performers. What I did back then, remained a driving force in inspiration which led to the art I do today, for real."

What are the lines that connect the legacy of underground Comix and Family Dog artists with your artwork?

These folks were the ones who made me sit up and pay attention to how free, open and wildly imaginative and socially honest these art forms can be. I hold a little bit of each one of them inside me. Rick Griffin and Robert Crumb probably made the most influence on me from those worlds.